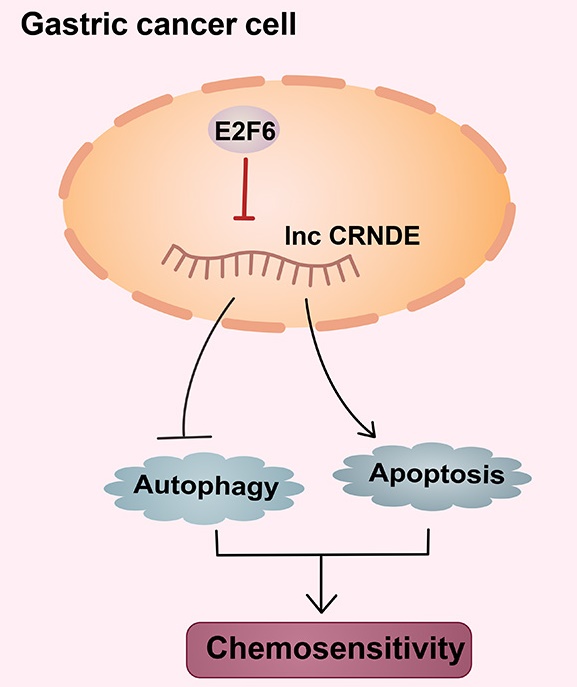 Chemotherapy is an important treatment for gastric cancer (GC), but the primary and secondary drug resistance of tumours to chemotherapy seriously affects its curative effect. In recent years, the relationship between long noncoding RNAs (lncRNAs) and malignant tumours has received increasing attention. Based on accumulating evidence, lncRNAs are involved in the chemoresistance of GC, but the underlying mechanisms remain unclear. In this study, we identified the lncRNA colorectal neoplasia differentially expressed (CRNDE) as an important regulator of autophagy-associated chemoresistance in GC. Mechanistically, overexpression of CRNDE inhibits autophagy and induces apoptosis, thereby sensitizing GC cells to chemotherapy drugs. Moreover, E2F6, a classical transcriptional inhibitor, is confirmed to be upregulated in GC and represses the expression of CRNDE. The E2F6-CRNDE axis is clinically related to chemoresistant GC and poor outcomes in patients with advanced GC. Our findings suggest that the E2F6-CRNDE axis is a viable therapeutic target to protect against chemoresistance in GC.