Background: Multivisceral resection is occasionally necessary for pT4b gastric cancer patients to achieve negative margin. The purpose of this study is to assess the short-term safety and long-term efficacy of this approach.

Conclusions: Multivisceral resection in pT4b gastric cancer patients without distant metastasis was effective and had an acceptable safety profile.

Gastric cancer (GC) is one of the most common fatal malignancies with high risk of metastasis and tumor recurrence [1]. Considering that locally advanced GC sometimes invade the surrounding organs (T4b), such as pancreas, colon, and liver [2], the multivisceral resection (MVR) surgery is necessary to achieve a negative margin [3, 4]. Generally, MVR surgery is considered to have higher cost with increased risk of postoperative complications and mortality [5]. The short-term safety and long-term efficacy have been widely debated over the years.

To date, only a few studies evaluated the safety and efficacy of MVR surgery focusing on pathologic T4b (pT4b) patients [3, 6, 11]. In Korea Cancer Center Hospital, 243 GC patients with pT4b were retrospectively reviewed, and the results demonstrated that the postoperative mortality rate was 0.8% and the media overall survival (OS) was 26 months [11]. Another National Cancer Database (NCDB) study showed that the mortality rate within 30 days of MVR surgery was 7.5% and the media OS was 12.9 months in pT4b GC patients underwent MVR surgery [6]. However, neither of the two studies explored the recurrence pattern of pT4b GC patients after MVR surgery. Meanwhile, the rates of postoperative complications and mortality varies greatly.

Therefore, we designed this study to assess the short-term safety, recurrence pattern and long-term survival of MVR surgery in pT4b GC patients based on the China National Cancer Center Gastric Cancer Database (NCCGCDB).

We retrospectively collected the clinicopathologic characteristics of pT4b patients who underwent potential curative MVR surgery from the China National Cancer Center Gastric Cancer Database (NCCGCDB). The details of NCCGCDB have been previously described and recognized [12]. The inclusion criteria were as follows: (i). Age more than 18 years; (ii). Adenocarcinoma of stomach; (iii). Postoperative pathology confirmed T4b. The exclusion criteria included: (i). Patients with other tumor history; (ii). Patients who confirmed with distant metastasis; (iii). Patients with incomplete clinical data.

The definition of pT4b was that gastric cancer directly invaded the adjacent structures, including the spleen, colon, liver, diaphragm, pancreas, abdominal wall, adrenal gland, kidney, small intestine, and retroperitoneum, according to the guidelines of the National Comprehensive Cancer Network (NCCN, version 5.2021). The requirement for written informed consent by patients was waived due to the retrospective nature of the study. Eventually, a total of 210 patients were enrolled into the final analysis.

The postoperative follow-up was performed through outpatient clinical visits, telephone contact, and death registries. Finally, 53 patients were lost to follow-up and the follow-up rate was 74.8%. The median duration of follow-up was 22 months (rang, 1-192 months).

The basic clinicopathologic features of the patients was presented using descriptive statistics. Categorical variables were presented with counts and proportions, while continuous variables were presented with medians and standard deviation (SD). Categorical variables were compared using the chi-square test and Fisher's exact test. Continuous variables were compared using the Mann-Whitney U test. Survival analysis was conducted using the Cox proportional hazards model. In the multivariate models, we included the factors with P≤0.2 in the univariate analysis and other important factors might affect the survival outcomes. All the survival analysis was performed with the SPSS software (SPSS Inc., Chicago, IL, USA, version 22.0). The survival curves were depicted according to the Kaplan-Meier method through GraphPad Prism software (GraphPad Software, La Jolla, CA, USA, version 8.0.2). Results with a two-tailed P<0.05 were considered as statistically significant.

The basic clinicopathologic characteristics of the 210 pT4b GC patients who underwent MVR surgery were displayed in the Table 1. The median age of all patients was 61 years (range, 24-82 years). Most patients (87.1%) were proved to have locoregional lymph nodes metastasis. In addition, most pT4b patients had large tumor size and poor differentiation. The most common combined resection organs were multiple organs (30.5%), pancreas (20.5%), colon (16.7%), and liver (9.0%). Although all the patients underwent potentially radical surgery, 12 patients (5.7%) were confirmed to have the positive surgical margins.

Regarding the surgical difficulty, as shown in the Table 1, most patients (93.3%) received open operation, and only 14 patients (6.7%) received laparoscopic surgery. The mean operation time were 209.8 minutes in all patients, and the operation time was longer in patients underwent gastrectomy combined with spleen resection. More than 50% of the patients required intraoperative blood transfusion, especially for patients combined pancreas resection and combined liver resection. Moreover, patients who received combined pancreas resection and multiple organs resection were more likely to have a longer stay in hospital (Table 2).

The 3-year and 5-year disease-free survival (DFS) rates for the patients investigated were 38.0% and 33.8%, respectively, and the 3-year and 5-year overall survival (OS) rates were 48.2% and 39.1%, respectively. The survival curves of DFS and OS were shown in Figure 1. Subgroup survival curve analysis according to the lymph node metastasis status and TNM stage found no statistical differences (Figure 2). Furthermore, we compared the survival curves of DFS and OS according to the combined resection organs and found that the patients received combined resection of pancreas and multiple organs were tend to have worse survival (Figure 3).

The survival curves of DFS and OS in pT4b gastric cancer patients who underwent MVR surgery.

The survival curves of DFS and OS according to the lymph node metastasis status and TNM stage. 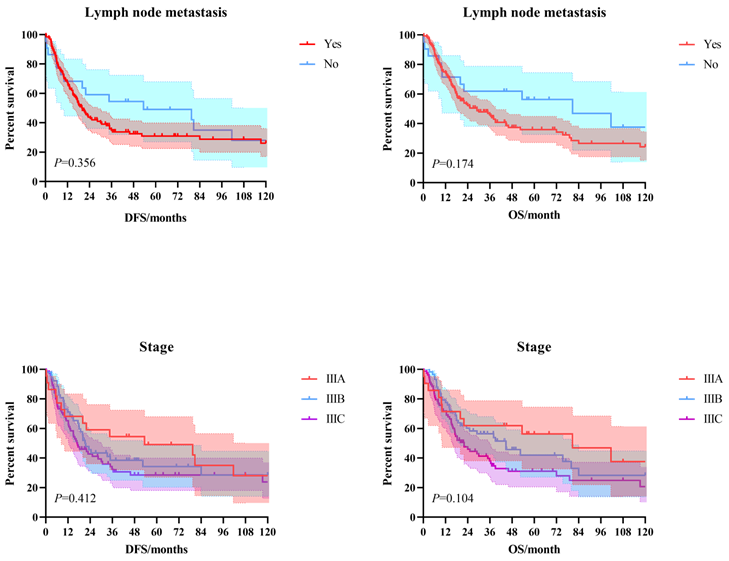 The survival curves of DFS and OS according to the combined resection organs.

Radical surgery (R0) is the only potentially curable treatment for GC patients. For pT4b GC patients, MVR surgery is necessary to achieve R0 resection. However, this operation remains debatable due to surgical difficulty and high incidence of postoperative complications and mortality. Therefore, we integrated 20-year experience to explore this clinically important question. Our results demonstrated that MVR surgery had relatively acceptable short-term safety and long-term efficacy. The current study provides further evidence to support MVR surgery in the future clinical practice to some extent.

It was worth noting that in our study, we found that the pN stage was not the independent prognostic factor in GC patients who received MVR surgery. This is in contrast with previous findings [2, 4, 6, 10, 11, 15, 21]. A possible reason for such contrary results may be that the current pN stage has insufficient homogeneity and discriminatory ability in predicting the survival of GC patients comparing with the positive lymph nodes ratio [22].

Previous studies have shown that the majority recurrence occurred within two years after surgery in GC patients [23, 24]. Moreover, Zhu BY et al. found that 43.8% GC patients with T4 stage experienced recurrence after curative surgery, and peritoneal metastasis was the major recurrence pattern accounting for 62.2% [8]. Furthermore, for pT4b patients, the proportion of peritoneal metastasis even reached to 88.3% [8]. However, in the present study, 54.3% pT4b GC patients after MVR surgery developed recurrence, and the major recurrence pattern were locoregional recurrence. Possibly, this difference in results could be related to the fact that the first sites of recurrence were not recorded in many patients in our study.

Indeed, we do acknowledge that there were some limitations in this study. Firstly, some key data and clinical information were missing for some patients due to the retrospective nature of our study. Secondly, follow-up time was relatively short in some patients, and some patients were lost to follow-up. Thirdly, many patients were followed by other oncological centers, therefore, the adjuvant treatment strategies and first sites of recurrence were not well recorded. Despite this, we believe that our study has unique features and certain strengths. Firstly, our study mainly targeted pT4b GC patients, which avoided the interference of some pT4a GC patients. Secondly, to the best of our knowledge, the current study was the largest sample size study in China that have assessed the short-term safety and long-term efficacy of potential curative MVR surgery in pT4b GC patients.

This was a retrospective, observational cohort study, therefore informed consent was waived by the National Cancer Center in China.

The datasets used during the current study are available from the corresponding author on reasonable request.