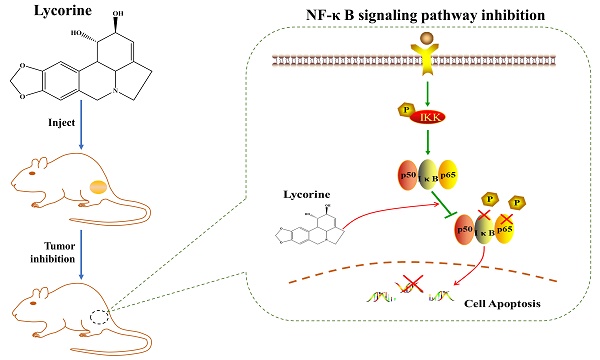 NF-κB transcription factors critically regulate the expression of genes which are involved in important cellular processes, including cellular proliferation and apoptosis. Abnormal activation of the NF-κB signaling pathway has been implicated in a variety of human cancers. Hyper-activation of the NF-κB signaling pathway has been found to lead to tumor survival, anti-apoptosis and invasion in the development of prostate cancer. In the present work, we identified Lycorine as a potent NF-κB inhibitor using a NF-κB activity dependent luciferase reporter in PC3 and DU145 prostate cancer cells. With this reporter gene assay, we found that Lycorine significantly suppressed the constitutive NF-κB activity as well as the NF-κB activity induced by TNF-α, LPS, PMA and IL-1β. Western blotting analysis of the NF-κB signaling pathway further showed that Lycorine inhibited IκB-α (inhibitor of κB) phosphorylation, IκB-α degradation, and p65 phosphorylation. Consistent with this, the subsequent nuclear translocation of p65 was blocked by Lycorine as evidenced in the immunofluorescence assay and western blotting. Furthermore, we observed that cell cycle was arrested at G2/M in Lycorine treated cells using FACS analysis. Western blotting analysis indicated that Lycorine increased the expression of Cyclin D1 but decreased the expression of p21. In addition, FACS analysis showed that Lycorine induced apoptosis in DU145 and PC3 cells. Western blotting analysis revealed that Lycorine decreased the expression of anti-apoptosis genes myc, survivin and Bcl-2 while increased cleavage of PARP. Finally, we observed a significant anticancer effect of Lycorine in a RM-1 prostate cancer xenograft mouse model. In agreement with its in vitro anticancer effect, Lycorine inhibited p65 phosphorylation, IKK-β phosphorylation and the expression of Ki-67, while increased the cleavage of Caspase 3 in tumor tissue. Taken together, our data demonstrated the in vitro and in vivo anti-prostate cancer activity of Lycorine by inhibiting the NF-κB signaling pathway, and highlighted it as a lead compound for further development into an effective anticancer drug.