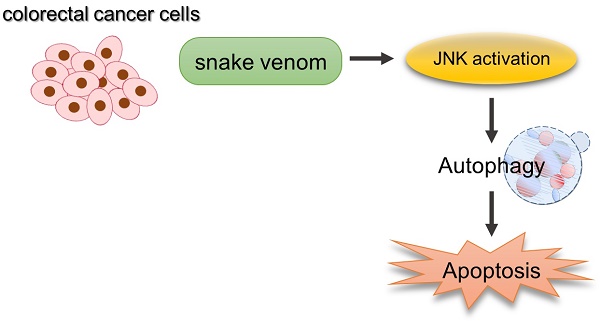 Snake venom contains many proteins that help treat or prevent thrombosis, cardiovascular disease, and cancer, and many studies have been reported in this regard. It has recently been reported that autophagy exerts anticancer effects by inducing tumor cell death and inhibiting cell growth. In this study, we investigated the effect of snake venom on autophagy. Unlike normal colon cells, LC3-II protein levels and LC3 puncta accumulation are increased in snake venom-treated colorectal cancer cells. Inhibition of autophagy by treating cells with hydroxychloroquine, an autophagy inhibitor, prevented snake venom-induced cell death, indicating that snake venom indeed induces autophagic cell death in human colorectal cancer cells. In addition, we demonstrated that activated JNK, and not mTOR signaling, is an upstream effector controlling autophagy. Pretreatment with SP600125, a JNK inhibitor, reversed snake venom-induced autophagy and cell death, indicating that JNK plays a critical role in snake venom-induced autophagy. This study demonstrated that snake venom can function as an anticarcinogenby induction autophagy.

Snake venom is highly toxic, and it was thus difficult to use it as a medicine in the past. Currently, the humankind is developing various new drugs and therapeutic agents using snake venom. With the development of acupuncture technology, which has reduced toxicity and better therapeutic effects, snake venom is now recognized as a treatment for diseases associated with severe pain, including rheumatism, shingles, atopic dermatitis, and arthritis [1-4]. Compared with other treatments, treatment using snake venom is more effective and rapid, with excellent immunotherapeutic and pain-relieving effects. Moreover, snake venom possesses anti-carcinogenic effects [5-8]. In our pervious study, we reported that snake venom can inhibit the proliferation of colorectal cancer cells (CRCs) and promote apoptosis, thereby confirming its anticarcinogenic activity.

Colorectal cancer accounts for approximately 9.4% of all cancer cases worldwide and is the fourth and third most common cancer in men and women, respectively. Approximately 1 million colorectal cancer cases are reported every year, and around 500,000 people die of colorectal cancer annually. In recent years, the number of patients with colorectal cancer has gradually increased. The incidence of cancer is associated with imbalances in cell production and cell death via apoptosis [9, 10]. Apoptosis refers to programmed cell death; this process contributes to the normal development of each body organ by eliminating cancer cells from organisms. Cell death is largely classified into apoptosis, necrosis, and autophagy. Autophagy and apoptosis occur in cells through various stress pathways. Autophagy and apoptosis regulate the conversion of cells in intracellular protein organelles, and many related associations have been reported [11-14]. Autophagy is abnormally increased or decreased in various diseases, including cancer in which it is ambivalent. The adverse effects of autophagy in cancer treatment include helping the cancer cells survive extreme conditions, for example metastatic cancer cells that lack nutrition; radiotherapy; or chemotherapy. However, autophagy continues to occur in cancer cells, which can cause cancer cell death soon after excessive degradation [13, 14]. Thus, induction or inhibition of autophagy enables the treatment of several diseases, including cancer. Therapeutics, including rapamycin (a representative autophagy inducer) and its derivatives (CCl-779 and RAD001) are currently being tested in clinical trials [11, 15, 16]. It is important to find a compound that has autophagic and apoptotic roles in cancer cells and analyze its specificity and mechanism; this will help identify anticancer drugs with autophagic activity that can play ambivalent roles in controlling cancer. In our previous study, we found that snake venom induces apoptosis in human CRCs [6]. In the present study, we aim to investigate if snake venom can induce autophagy and assess its role in snake venom-induced cell death as well as understand the underlying molecular mechanisms.

The cells were fixed using 4% paraformaldehyde in PBS for 15 min at room temperature. The cells were then permeabilized with 100% cold-methanol for 5 min and blocked using 4% bovine serum albumin in PBS with 0.1% Triton X-100 for 1 h. The primary antibodies were added, and the cells were incubated overnight at 4°C; then, Alexa Fluor 488 (#A32723, #A32731, Invitrogen, Carlsbad, CA) or Texas Red (#T-862, #T-2767, Invitrogen)-conjugated secondary antibodies were added and the cells were incubated for 1h at room temperature. The cells were then incubated with 1 μg/ml 4',6-diamidino-2-phenylindole (#D9542, Sigma-Aldrich, St. Louis, MO) for 5 min at room temperature and subsequently mounted using the Fluoromount-G Mounting Medium (#0100-01, Southern Biotech, Birmingham, AL). The cells were visualized using the ZEISS Axio Observer fluorescence microscope system (Carl Zeiss, Oberkochen, Germany). Digital images were analyzed using ZEN 2.1 software (Carl Zeiss). For quantitative analysis, 100 cells were counted in 10 random fields and performed at least 3 independent experiments. The size of the autophagosome was 0.5 to 2 μm, and the number of LC3 puncta (0.5 to 2 μm puncta size) per cell was counted. 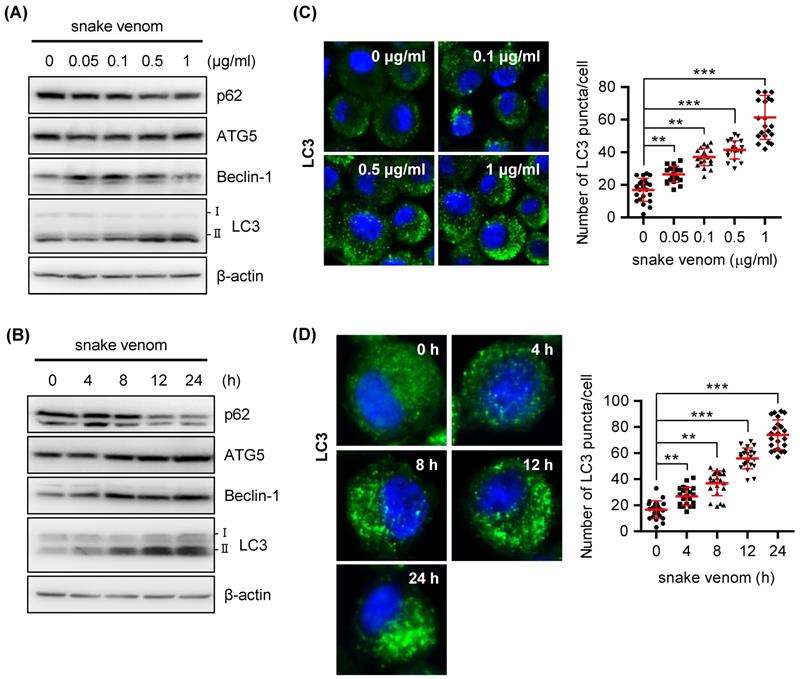 To analyze the autophagy flux, RFP-GFP-LC3 cells were generated using the Premo™ Autophagy Tandem Sensor RFP-GFP-LC3B Kit (Thermo Scientific, Waltham, MA) according to the manufacturer's protocol. When RFP-GFP-LC3 moves to lysosomes, acid-sensitive GFP signals are quenched by pH changes, while acid-insensitive RFP signals are maintained. Using this color change, the co-expression (yellow) of GFP and RFP represents autophagosome, and the expression of RFP represents autolysosomes. Cells were transduced with tandem reagent for 24 h at 37°C. The cells were then visualized the ZEISS Axio Observer fluorescence microscope system (Carl Zeiss). Digital images were analyzed using ZEN 2.1 software (Carl Zeiss). For quantitative analysis, 100 cells were counted in 10 random fields and performed at least 3 independent experiments. The the ZEN 2.1 software was used to obtain the number of yellow puncta (RFP+GFP; autophagosome) per cell and the number of red puncta (RFP; autolysosome) per cells were obtained.

The formation of autophagosomes was assessed using the CYTO-ID® Autophagy detection kit (Enzo Life Sciences Inc., Farmingdale, NY), according to the manufacturer's protocol. In brief, the cells were stained with CYTO-ID for 1 h at 37°C in the dark. The cells were then visualized the ZEISS Axio Observer fluorescence microscope system (Carl Zeiss). Digital images were analyzed using ZEN 2.1 software (Carl Zeiss).

The cells were plated onto 96-well plates, and treated with 0, 0.1, 0.5, and 1 μg/ml snake venom for 24 h. After 24 h, cell viability was assessed using the 3-(4,5-dimethyl-2-thiazolyl)-2,5-diphenyl-2H-tetrazolium bromide (MTT) assay (#M5655, Sigma Aldrich), according to the manufacturer's protocol. In brief, 5 μg/ml MTT solution was added to the cells and the plate was incubated at 37°C for 4 h, following which 100 μL dimethyl sulfoxide was added to each well. The absorbance values of each cell sample were read using a microplate reader at a wavelength of 540 nm. 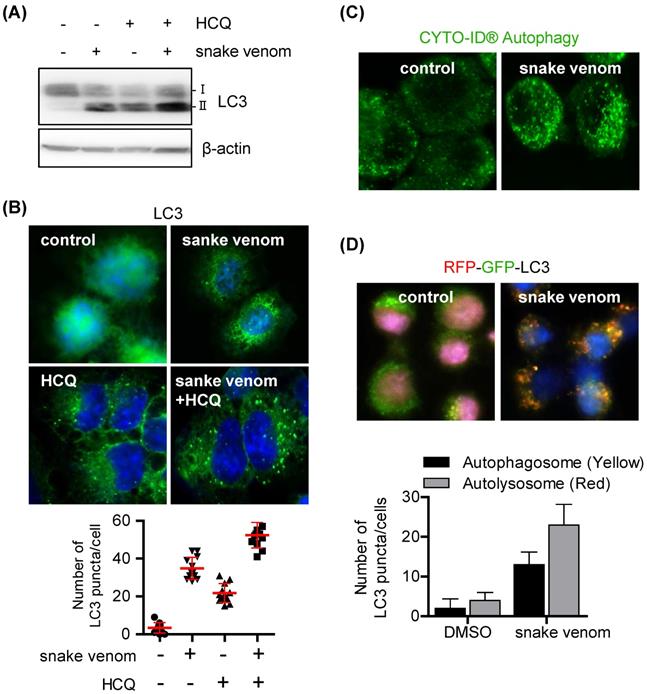 To explore the mechanisms underlying snake venom-induced autophagy, we examined the effects of snake venom on phosphorylated mammalian target of rapamycin (mTOR) protein levels. mTOR is a serine/threonine kinase that belongs to the PK3K-related family kinase that has been known to regulate cell growth, cell proliferation, autophagy, and protein synthesis through growth factors, nutrients, and stress stimulation [21-24]. Unexpectedly, the phosphorylation levels of mTOR remained unchanged, suggesting that mTOR is not required for snake venom-induced autophagic response (Figure 4A). Snake venom did not affect the phosphorylation of the mTOR downstream targets p70 ribosomal protein S6 kinase (p70S6K Thr389, Ser371), eukaryotic translation initiation factor 4E binding protein 1 (4E-BP1, Thr 37/46), and ULK (Figure 4A and 4B), indicating that snake venom induces autophagy via an mTOR-independent pathway.

JNK is reportedly involved in mTOR-independent autophagy [25-28]. Therefore, JNK activation following snake venom treatment has been investigated. We found that the levels of activated JNK are increased upon snake venom treatment in a dose-dependent manner (Figure 4C). Indeed, JNK activation correlated with an increase in c-Jun phosphorylation levels (Figure 4C). Blocking JNK using the pharmacological inhibitor SP600125 attenuated the expression levels of LC3-II after snake venom treatment (Figure 4D). LC3 puncta formation was considerably decreased in the cells treated with a JNK inhibitor combined with snake venom as compared with snake venom alone (Figure 4E). The JNK inhibitor alone did not cause greater puncta formation in treated versus untreated cells. These data indicate that JNK signaling is a critical regulator of snake venom-induced autophagy.

Next, we investigated whether snake venom-induced autophagic cell death depends on JNK pathway activation. To address this, SW480 cells were treated with SP600125 with or without snake venom. SP600125 hindered the cytotoxic effects of snake venom (Figure 5A and 5B). Moreover, the TUNEL assay further indicated that treatment with SP600125 prevents the snake venom-induced increase in the apoptotic rate in SW480 cells (Figure 5C). In addition, the results of western blotting demonstrated that both the treatments suppressed the levels of apoptosis-related proteins (Figure 5D). Taken together, our results suggested that snake venom induces colorectal cell apoptosis and autophagy via the JNK signaling pathway. 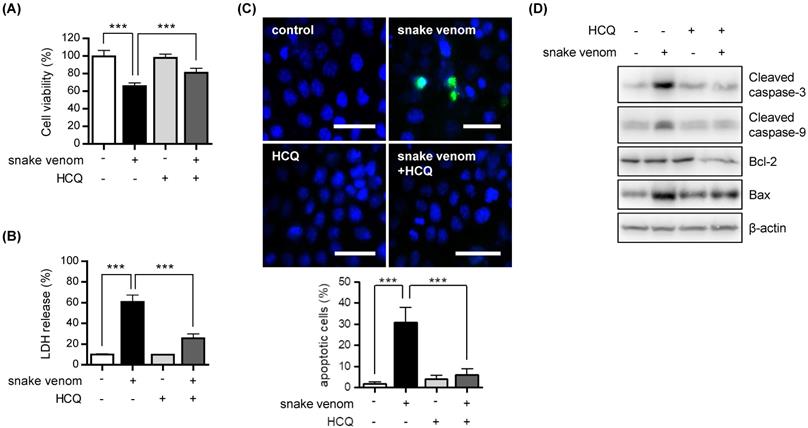 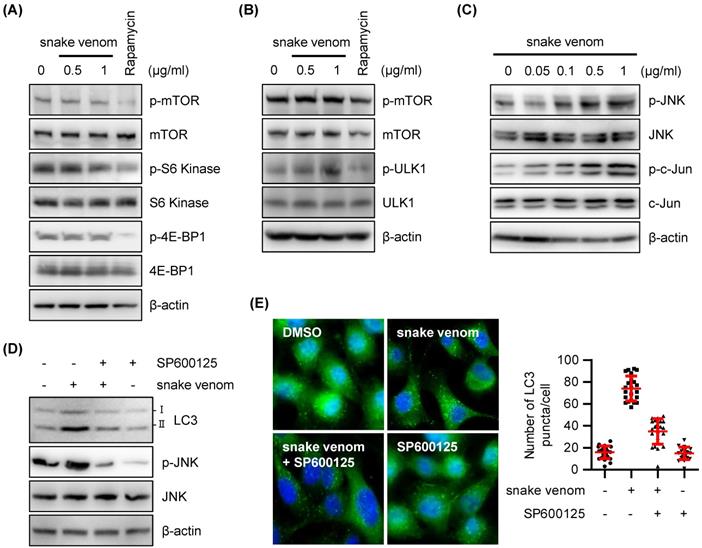 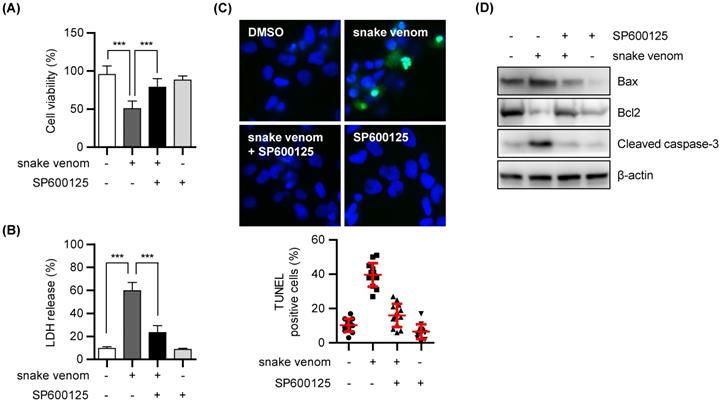 The LC3 system plays an important role in autophagosome maturation; LC3-II attaches to the isolation membrane during the elongation stage and, unlike the Atg12-Atg5-Atg16 complex, remains attached until it degrades [29]. The protein p62 has an ubiquitin-associated domain that can bind to ubiqutinated proteins. The ubiqutinated protein-p62 complex interacts with the LC3-II attached to the autophagosome and, eventually, the complexes and organelles in the autophagosome containing p62 get degraded by lysosomes [12]. In the present study, we first demonstrated that snake venom induced autophagy in SW480 cells. Snake venom-induced autophagy was reported on the basis of LC3 conversion and accumulation of the LC3 punctate formation pattern. Moreover, snake venom decreased the p62 protein level in a dose- and time-dependent manner as demonstrated using western blotting. But snake venom was not induced autophagy in CCD-18Co normal colon cells. We showed that snake venom induced autophagy in A549 lung cancer cells, HeLa CCL2 cervical cancer cells, and U-2 OS osteosarcoma cells. These findings indicate that snake venom could generally induce autophagy in various cancer cell lines not normal cell lines. We used pharmacological approaches to inhibit autophagy. The results of the western blotting of LC3-II protein expression under treatment with HCQ showed that autophagy can increase after exposure to snake venom.

Autophagy and apoptosis are not completely independent of each other, they are associated with each other through intracellular signaling systems. However, unlike apoptosis, autophagy not only leads to cell death but also exerts ambivalent functions that contribute to cell survival [12, 14]. In our previous study, we demonstrated that snake venom induces apoptosis; in this study, we found that snake venom also induces autophagy. The expression of autophagy- and apoptosis-related proteins was indeed reduced after combined treatment with snake venom and HCQ in CRCs. Our data thus suggest that snake venom induces autophagic cell death.

Autophagy is induced by various signaling pathways and is promoted by the down-regulation of mTOR, a representative central metabolic sensor [30-32]. However, our results showing that the levels of mTOR substrates remained unchanged in snake venom-treated cells suggest that snake venom-induced autophagy is mTOR-independent. JNK signaling is critical for the induction of mTOR-independent autophagy. JNK regulates cell proliferation, cell differentiation, apoptosis, and autophagy and is activated by extracellular signals [25-27, 33]. Hence, the phosphorylation of JNK was increased in CRCs treated with snake venom. Inhibition of JNK by SP600125 reduced the LC3-II levels in snake venom treated-SW480 cells. These results demonstrated that the activation of the JNK pathway by snake venom is critical to snake venom-induced autophagy. Moreover, the activation of JNK by snake venom affects autophagy-induced apoptosis. Inhibition of the JNK activity by SP600125 also decreased the levels of cleaved caspase-3 and -9, which may lead to snake venom induced autophagy via the JNK signaling pathway.

This work was financially supported by the National Research Foundation of Korea [NRF] Grant funded by the Korea government (MSIP) (No; MRC2017R1A5A2015541).