Hepatocellular carcinoma (HCC) is the fifth and seventh most common cancer in men and women, respectively, and the third most common cause of cancer-related mortality worldwide 1. According to WHO projections, the global burden of HCC, especially in industrialized countries, such as the Unites States, United Kingdom, and Australia, is expected to rise, and by 2030 it is predicted to account for the second highest increase in cancer-related death rates 2. HCCs constitute a therapeutic challenge with mostly unfavorable outcome among all the solid malignancies. For those with advanced non-resectable diseases, non-surgical treatments have been offered, but with little survival benefit. This may reflect our incomplete understanding of disease pathogenesis, e.g. the elucidation of tumorigenic signaling pathways. Therefore, identification of new therapeutic targets for HCC patients is imperative 3.

Transforming growth factor β (TGF-β) family members are multifunctional cytokines that control proliferation, differentiation, apoptosis, embryonic development, angiogenesis, wound healing, and many other functions in both normal and transformed cells 4. In many types of cancers including HCC, TGF-β functions paradoxically at different stages of tumorigenesis. During the onset of tumor formation, TGF-β functions as a tumor suppressor via its cytostatic effects, e.g. inhibition of cell proliferation and induction of apoptosis; whereas at advanced stages of cancer, it functions as a tumor promoter aiding in tumor progression through promotion of epithelial-to-mesenchymal transition (EMT) and metastasis. Alternatively, the tumor-suppressive role of TGF-β is lost at the later stage of carcinogenesis due to disruption of TGF-β signaling or decreased expression of the TGF-β signaling molecules. Previous studies by others and ourselves have shown that TGF-β is a potent inducer of apoptosis in several HCC cell lines 5-7. Consistent with these in vitro findings, lower TGF-β expression level is correlated with higher survivin expression and reduced apoptotic index in HCC tissues 8. These observations suggest that TGF-β may play a defensive role against tumor progression in HCC through regulation of apoptosis in tumor cells.

Parathyroid hormone-related protein (PTHrP) is a polyhormone protein that plays a role in a number of biological processes by acting via endocrine, paracrine, autocrine, and intracrine pathways 9. There are three isoforms of human PTHrP peptide ranging in length from 139 to 173 amino acid residues 10, all of which undergo are subjected to extensive post-translational processing including ubiquitin-proteasomal degradation 11. PTHrP can exist as a secretory protein which functions as a classical circulating hormone to regulate calcium metabolism 12 and mediate hypercalcemia of malignancy in cancer patients 13. However, intracellular PTHrP also functions as an important regulator of cellular processes such as cell growth, differentiation 14 and apoptosis 15. Evidence has accumulated that PTHrP mediates certain biological effects of TGF-β, including bone remodeling 16 and apoptosis 17. However, how PTHrP is regulated in HCC, especially by TGF-β, is still poorly understood. In the present study, we provided evidence to show that TGF-β induced PTHrP protein degradation through the ubiquitin-proteasome system. Furthermore, we assessed the expression pattern of TGF-β and PTHrP in HCC specimens and found that TGF-β and PTHrP were differentially expressed in cancer cells and adjacent normal tissues. Our findings reveal a novel mechanism through which TGF-β regulates the PTHrP protein during hepatocellular carcinogenesis.

For transfection, subconfluent Hep3B or 293T cells were transfected with EGFP-PTHrP or HA-Ub using FuGENE 6 as recommended by the manufacturer. 48 or 72 h after transfection, the cells were starved and treated with or without TGF-β as described above.

Formaldehyde-fixed paraffin-embedded HCC tissue sections (4-µm-thick) were obtained from the First Affiliated Hospital of Hunan Normal University. Immunohistochemical staining for PTHrP and TGF-β was carried out using the PV-9000 2-step plus Poly-HRP Anti-Mouse/Rabbit IgG Detection System. Briefly, the sections were deparaffinized in xylene and hydrated through a series of graded ethanols. The sections were incubated in 3% hydrogen peroxide for 15 min to block endogenous peroxidase activity. Antigen retrieval was performed in citrate buffer (pH 6.0) with a microwave oven. After sections were cooled to room temperature, the slides were incubated with antibody against PTHrP or TGF-β (both at 1:200 dilution) overnight at 4°C. Subsequently, the Polymer Helper and HRP-conjugated anti-mouse/rabbit IgG were applied, followed by coloration with DAB/H2O2 and counterstaining with Mayer's hematoxylin.

Liver cancer tissue array slide (IMH-360) including 38 cases of HCC and combined HCC & cholangiocarcinoma samples and 9 matched non-neoplastic liver tissues was purchased from Novus (Oakville, ON, Canada). The liver tissues were obtained from Chinese liver cancer patients. The tissue array slide was deparaffinized, hydrated, and subjected to antigen retrieval as with tissue sections. After quenching of endogenous peroxidase and alkaline phosphatase activity, the slide was subjected to double immunostaining using the monoclonal anti-TGF-β antibody and the polyclonal anti-PTHrP antibody, respectively, at 1:200 dilution overnight at 4°C. The expression of TGF-β and PTHrP was revealed by the PV-9002 two-step plus Poly-HRP Anti-Mouse IgG Detection System and the Biotin SP-AP Detection System, respectively, following the manufacturer's instructions. After counterstaining with nuclear fast red, the sections were dehydrated, cleared in xylene and mounted.

Protein staining was evaluated under a light microscope by an authorized pathologist and confirmed by another experienced pathologist. Staining intensity was scored manually as 0 = no staining, 1 = weak staining, 2 = moderate staining, and 3 = strong staining. The percentage score of positively stained cells was designated as 1 = 0-5%, 2 = 5-10%, 3 = 10-15%, 4 = 15-20%, and 5 > 20%. The final expression score was calculated by multiplying the intensity score with the percentage score of positive cells.

The differences for TGF-β and PTHrP expression between non-neoplastic and cancerous tissues were analyzed by the Student's t test using the GraphPad Prism software (version 5.0, La Jolla, CA). A two-tailed value of P < 0.05 was considered statistically significant.

To investigate whether TGF-β regulated PTHrP protein expression, we treated different HCC cell lines with TGF-β. As shown in Figure 1A, TGF-β decreased PTHrP protein level in all three HCC lines, although for Hep3B cells, longer exposure of the blot was needed to reveal the reduction of PTHrP. Furthermore, a dose- and time-dependent decrease of both cytoplasmic and nuclear PTHrP was observed in HuH-7 cells (Figure 1B, 1C). This was confirmed by transient transfection with an EGFP-tagged plasmid containing full-length PTHrP in Hep3B cells and found that TGF-β reduced the protein level of exogenous PTHrP in these transfected cells (Figure 1D). These data indicated that TGF-β negatively regulated PTHrP protein level in HCC cell lines.

Smurf2 is responsible for TGF-β-induced ubiquitination of PTHrP 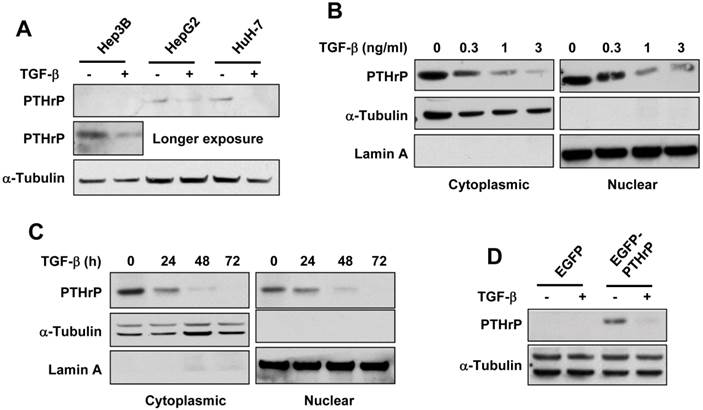 TGF-β induces degradation of PTHrP through the ubiquitin-proteasome pathway. (A) Hep3B cells were serum-starved and treated for 48 h with different concentrations of TGF-β1 in the presence or absence of lactacystin (5 μM). Cell lysates were prepared and subjected to western blot analysis for PTHrP with Hsp90 expression as a loading control. (B) Serum-starved HuH-7 cells were treated with or without TGF-β1 (1 ng/ml) for 48 h and subjected to whole cell lysate preparation and western blot analysis. (C) Hep3B and HuH-7 cells were co-transfected with EGFP-tagged PTHrP (EGFP-PTHrP) and HA-tagged ubiquitin (HA-Ub). 72 h after transfection, the cells were serum-starved and treated with or without TGF-β1 (1 ng/ml) and subjected to whole lysate preparation and immunoprecipitation-western blot analysis. 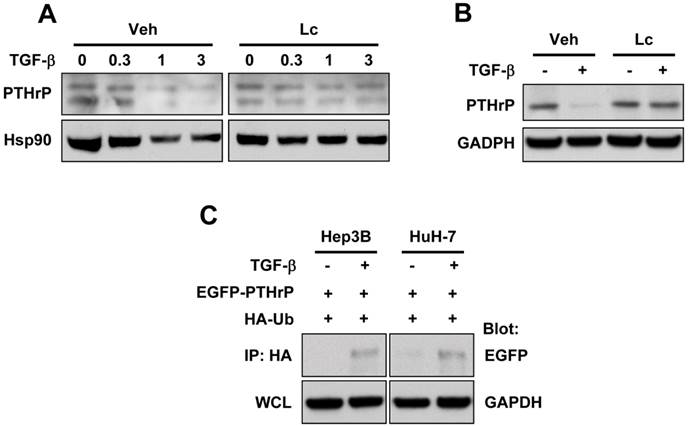 Smurf2 is responsible for TGF-β-induced ubiquitination of PTHrP. (A) HEK-293T cells were transfected with the plasmids as indicated, serum-starved and treated for 48 h with or without TGF-β1 (1 ng/ml). Whole cell lysates were prepared and subjected to immunoprecipitation and western blot analysis. 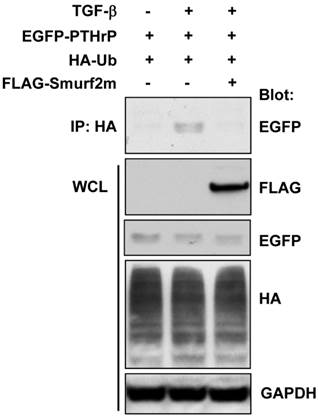 Immunolocalization of TGF-β and PTHrP in HCC. Human HCC specimens were stained for PTHrP (A) and TGF-β (B) by immunohistochemistry using the HRP and DAB/H2O2 development system. The nuclei were counterstained with hematoxylin. Shown is a representative pattern of staining of PTHrP and TGF-β in a HCC patient tissue (ID #162475). Original magnification: x100. 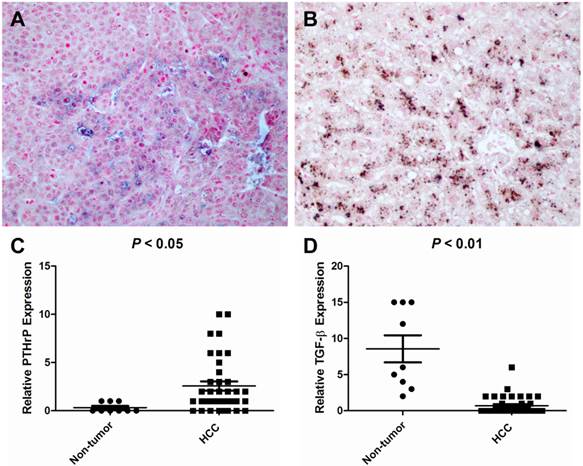 TGF-β signaling plays a critical role in the development of liver cancer through regulation of cell processes such as epithelial-to-mesenchymal transition and apoptosis. Several studies have focused on regulating TGF-β signaling, especially at the level of substrates and receptors 23-25. However, little is known about the interaction between TGF-β and other signaling pathways. PTHrP is a secretory polyhormone that plays fundamental roles in various functional aspects of cell biology. In the present study, we have provided evidence to show that TGF-β induced protein degradation of PTHrP through the ubiquitin-proteasome-mediated pathway in a Smurf2-depenent manner. These observations led us to propose that TGF-β may antagonize the actions of PTHrP during the process of liver carcinogenesis, which was supported using HCC tissue specimens and microarray. Our findings represent the first demonstration that TGF-β antagonizes PTHrP through a post-translational mechanism in HCC.

PTHrP was first discovered as an etiological factor of humoral hypercalcemia of malignancy (HHM) in certain types of cancers such as breast, lung, renal, ovarian and pancreatic carcinomas and myeloma, which show a strong tendency to metastasize to bone 26. Subsequently, PTHrP was found to be expressed in numerous types of cancers with clinical manifestations of HHM. In HCC, serum PTHrP concentration was increased (7.1 to 33.2 pmol/l) compared with normal controls 27. Our study demonstrated that PTHrP was expressed at a much higher level in HCC cancer tissues than the non-cancerous tissues (Figures 4 and 5). Tumor-derived PTHrP can act in different ways to modulate tumor growth, progression, and metastasis. For example, PTHrP acts in an autocrine and a intracrine manner to promote apoptosis resistance and survival of the tumor cells 28.

As mentioned earlier, the regulation of PTHrP in carcinogenesis is far from clear. The situation is made more complicated by the involvement of TGF-β, which is a well-known regulator of PTHrP in bone metastasis, such as occurs in breast cancer 29, 30. Previous study by us and others revealed that TGF-β stimulated PTHrP mRNA expression 17, 31, stability 32 and secretion 17, 31 in different cell types. In terms of PTHrP regulation, TGF-β may play both agonizing and antagonizing effects in different cancer lines, depending on the stage of cancer progression and the type of cancer involved. Alternatively, increased protein secretion and degradation of PTHrP stimulated by TGF-β may drive the mRNA synthesis (and possibly de novo protein synthesis as seen in the current study [Supplemental Figure 1]) of PTHrP as the cell's attempt to compensate for the decreased intracellular protein level of PTHrP. A generalized model is needed to explain the regulation of PTHrP by TGF-β at the transcriptional, translational and post-translational levels, which is beyond the scope of the current study.

In HCC, TGF-β has a pivotal role in orchestrating and regulating the corresponding phenotypes of HCC. It is possible that PTHrP in HCC cells is anti-apoptotic, favoring HCC cell survival, proliferation, and possibly metastasis. It can be speculated that TGF-β exerts its cytostatic effect in liver cells through the regulation of PTHrP via ubiquitin-proteasome-mediated degradation of intracellular PTHrP protein. TGF-β-induced ubiquitin-proteasomal degradation of PTHrP in HCC is in concordance with previous reports that PTHrP undergoes ubiquitin-mediated proteasomal degradation in other cell types 33, 34. The net effect of the actions of TGF-β is the reduction of intracellular PTHrP and eventual induction of cytostasis of hepatocytes.

The mechanism of the cross-talk between TGF-β and PTHrP signaling is critically relevant for devising therapeutic modalities in order to stimulate TGF-β expression and suppression of liver tumor growth. Based on the observations of us and others, we propose that TGF-β, which is functional in normal liver tissues or at the initial stage of liver carcinogenesis, exerts its anti-cancer effect through ubiquitin-proteasome-mediated degradation of PTHrP. This beneficial function of TGF-β was lost in HCC suppressed TGF-β expression and subsequent increased PTHrP. In this sense, up-regulation of TGF-β ligand production is one option to restrain further HCC development in cells that have intact TGF-β signaling. This may explain, at least partly, why contrary to the beneficial outcome of anti-TGF-β treatment in animal disease models 35, only limited positive or even adverse results are documented for human liver diseases including HCC. Therefore, caution should be taken when targeting TGF-β signaling for the treatment of human HCC.

We have revealed a novel mechanism of regulation of PTHrP by the multifunctional cytokine, TGF-β, i.e., promotion of degradation of PTHrP through the ubiquitin-proteasome system. The TGF-β-PTHrP signaling axis provides a novel target of therapeutic intervention that has the potential to be used to sensitize HCC cells to pro-apoptotic signals.