Ovarian carcinoma is the most lethal gynecologic malignancy and leading the mortality with 140,000 deaths annually worldwide [1-2]. Ovarian serous carcinoma is the most common subtype of epithelial ovarian cancer which accounts for about 45% of all ovarian cancers [3]. The high mortality rate for ovarian serous carcinoma largely remains undetectable in early stage and lack of reliable biomarkers to evaluate its prognostic progression [4-7]. Although several prognostic biomarkers have been evaluated, there are still insufficient methods to identify high-risk patients [8-10]. Therefore, a challenge for ovarian serous carcinoma research remains identification of tumor biomarkers to aid in predicting early recurrence and metastasis.

CUEDC2, a CUE domain-containing protein, is a small and moderately conserved ubiquitin-binding domain of about 40 amino acids. CUEDC2 has been found in a variety of eukaryotic proteins and plays critical roles in many biological processes, such as cell cycle, inflammation and tumor genesis. It interacts with inhibitor of IkB kinase α (IKKα) and IKKβ, and regulates IKK phosphorylation and activation [11-14]. Its overexpression causes earlier activation of anaphase-promoting complex/cyclostome (APC/C), leading to chromosome missegregation and aneuploidy which might contribute to tumor development [15-16].

In this study, we performed an immunohistochemical study on 101 cases of ovarian serious carcinoma tissues. The aims of this study were (1) to evaluate the association between CUEDC2 expression and clinicalpathological factors, such as histopathological grade, patient age at diagnosis, FIGO stage, recurrence and lymph node metastasis, and (2) to investigate the association between CUEDC2 expression in ovarian serous carcinoma and the prognosis of patients who underwent curative laparotomy.

For this retrospective cohort study, tumor tissues were collected from 101 patients with primary serous ovarian carcinoma who underwent surgery during January 2007 to December 2010 at the Chinese People's Liberation Army General Hospital. Patients were excluded if 1) undergoing neoadjuvant chemotherapy before the surgical operation, 2) tumor tissue paraffin blocks were unavailable or inadequate, or 3) with other synchronous or metastatic tumors to the ovary. Tissue specimens were formalin fixed and paraffin embedded (FFPE).

Sections from FFPE tissues were used for immunohistochemical staining according to a standard method. Briefly, each 4-μm tissue section was deparaffinized with xylene and rehydrated. After rehydration through a graded ethanol series, the sections were autoclaved in 10 mM citrate buffer (pH 6.0) at 120°C for 2.5 min for antigen retrieval, then cooled to 30°C and washed with phosphate buffered saline (PBS, pH 7.3). After endogenous peroxidase had been quenched with aqueous 3% H2O2 for 10 minutes and washed with PBS, the sections were incubated at 4°C overnight with CUEDC2 antibody (donated by Professor Xuemin Zhang, State Key Laboratory of Proteomics, Institute of Basic Medical Science, Chinese National Center of Biomedical Analysis) at a 1:200 dilution in antibody diluent solution and then washed with PBS. Next, the sections were incubated with secondary antibody (Fuzhou Maxim Biotechnology Development Co., China) for 30 min at room temperature. Color development was performed with Polink-2 HRP DAB Detection kit. Nuclei were lightly counterstained with hematoxylin. Two pathologists independently assessed the immunostained slides. Any difference in immunohistochemical scores was resolved by a consensus. Quality assessment was performed on each batch of slides by including negative control (the primary antibody was replaced by PBS) to preclude nonspecific signal and breast carcinoma tissues, known to express high levels of CUEDC2 protein, as positive control.

Evaluation and interpretation of IHC

All of staining was assessed by pathologists blinded to the origination of the samples and subject outcome. The widely accepted German semi-quantitative scoring system in considering the staining intensity and area extent was used. Each specimen was assigned a score according to the intensity of cytoplasmic staining (no staining = 0; weak staining = 1, moderate staining = 2, strong staining = 3) and the extent of stained cells (0% = 0, 1-24% = 1, 25-49% = 2, 50-74% = 3, 75-100% = 4). The final immunoreactive score was determined by multiplying the intensity score with the extent of score of stained cells, ranging from 0 (the minimum score) to 12 (the maximum score). We defined 0 score as negative, 1-6 score as weak positive expression and ≥8 score as strong positive expression, respectively.

The correlation between CUEDC2 expression and patient age, histopathological grade, clinical stage and lymph node metastasis was analyzed by chi-square test. We defined disease-free survival (DFS) as the time from the date of diagnosis to the first recurrence (local or distant), and overall survival (OS) as the time from the date of diagnosis to the patient's death from ovarian serous carcinoma. Patients who were alive at the last follow-up were censored at the last follow-up date, and patients who died from causes other than ovarian serous carcinoma were censored at the time of death. Survival curves were constructed with the Kaplan-Meier product-limit method and compared by the log-rank test. To evaluate the independent prognostic factors associated with survival, multivariate Cox proportional hazards regression analysis was used. We performed the statistical analyses using SPSS 17.0 software. All statistical tests were two-sided and P values < 0.05 were considered to be statistically significant.

The study was approved by the PLA General Hospital Ethics Board. Informed consents were obtained from all patients or their relatives.

The mean age of 101 cases at the time of diagnosis was 51.6 years old (range 19-74 y). Forty six cases (45.5%) demonstrated lymph node metastasis after lymph node sampling or dissection. Seventy three cases were categorized into HGSC and 28 cases were LGSC. Twenty four out of 101 cases were in early stage (10 cases for stage I and 14 cases for Ⅱ) and 77 cases in advanced stage (62 cases for Ⅲ and 15 cases for Ⅳ).

A total of 74 cases had followed up records and were therefore included in data analysis. The mean DFS time of 74 cases was 34.5 months. Eight cases had failure of the treatment due to persistent local lesion or recurred within 6 months and 41cases recurred (40.6%) in 7 to 68 months after the operation with a median DFS of 25.4 months. The mean OS time of 74 cases was 41.7 months. Twenty two cases (21.8%) had died of this disease in 3 to 69 months after the operation.

Forty one samples showed no expression of CUEDC2. Sixty samples exhibited positive immunostaining among which 33 samples were determined as weak positive with cytoplasm in light yellow color and 27 were strong positive with yellow or dark yellow as shown in Fig 1.

Expression of CUEDC2 was associated with age at diagnosis, histopathological grade, FIGO stage and recurrence

The expression of CUEDC2 in different histopathological grade subgroups were highly correlated. Almost seventy percent (69.9%) samples were positive in HGSC subgroup compared with 32.1% of the LGSC subgroup (P=0.001). More samples with advanced FIGO stage (66.2%) exhibited positive expression than early FIGO stage (37.5%) (P=0.012). Recurrence, age at diagnosis ≥50 y were observed more frequently in CUEDC2-positive subgroup compared with negative subgroup (75.6% versus 48.0%, P=0.022; and 67.8% versus 47.6%, P=0.042; respectively). In addition, the positive expression rate of the cases with lymph node metastasis (65.2%) was higher than cases without lymph node metastasis (54.5%), but no statistically significant difference (P=0.277) as shown in table 1.

In univariate survival analysis, CUEDC2 expression, FIGO stage, and age at diagnosis reached significance for DFS time; meanwhile, histopathological grade, FIGO stage, and age at diagnosis reached significance for OS time (Table 2). Although CUEDC2-positive expression was not related to OS time (Fig 2, P=0.206), it is associated with a shorter DFS time (Fig 3, P=0.013). Moreover, a further analysis was carried out, the results showed that weak CUEDC2 expression was associated with a poor prognosis compared with negative CUEDC2 expression (P=0.010), whereas there was no difference in survival between the “strong” and “weak” expression groups (Fig 4). In addition, we analyzed the relationship of CUEDC2 expression and the prognosis in LGSC and HGSC group respectively. The results showed that the mean DFS time of CUEDC2-positive cases was 34.0 months versus 44.2 months of CUEDC2-negative cases in LGSC subgroup; correspondingly, the data was 29.4 months versus 38.4 months in the HGSC subgroup. Survival curve showed that the CUEDC2-positive cases had shorter DFS time tendency compared to CUEDC2-negative cases, although there were no statistically significant difference (P=0.197 and P=0.070, Fig 5). Multivariate survival analysis based on the Cox proportional hazards regression model was performed on all parameters. The result of this analysis was shown in table 3. It can be seen that the FIGO stage was independent predictor of a shorter DFS time for patients undergoing curative resection (P=0.000) and CUEDC2 was a potential predictor.

Overall survival of CUEDC2-negtive patients versus CUEDC2 -positive patients, there was no statistically significant difference (P=0.206) 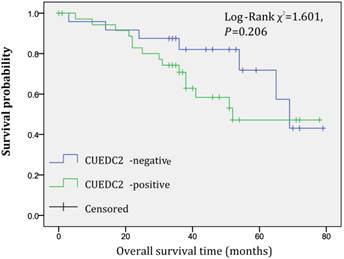 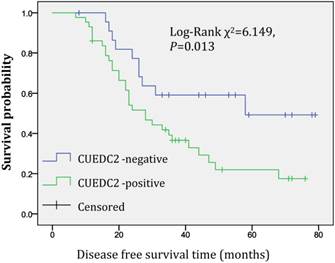 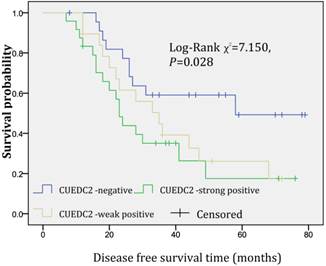 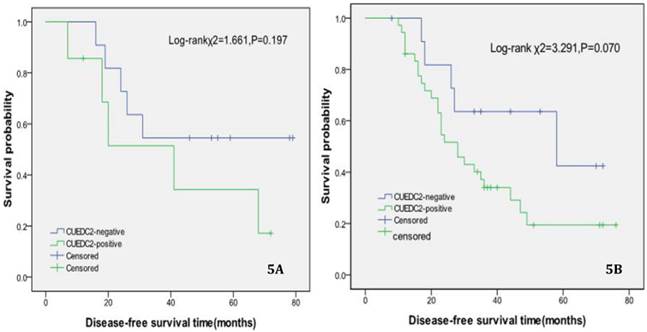 CUEDC2, a CUE domain-containing protein, plays critical roles in many biological processes, such as cell cycle, inflammation and tumor genesis [19]. Chen reported that CUEDC2 is a key regulator of macrophage function and critical for protection against colitis-associated tumor genesis [20]. Zhang suggested that the expression level of CUEDC2 had an inverse correlation with imatinib resistance and activity of NF-κB signaling pathway in CML cells, CUEDC2 could regulate imatinib sensitivity in CML cells at least partially through NF-κB signaling pathway [21].

In the present study, we evaluated the frequency of CUEDC2 in ovarian serous carcinoma by using immunohistochemistry, and assessed whether overexpression of this protein had any clinical or pathological significance. To our knowledge, this is the first study to evaluate CUEDC2 expression in ovarian serous carcinoma. We found 60 out of 101 (59.4%) ovarian serous carcinoma samples were positive, among which 33 samples were weakly immunostained and 27 strongly immunostained. Regarding a potential correlation with clinicopathologic variables, we found significant association between CUEDC2 expression and patient's age at diagnosis, FIGO stage, histopathological grade and recurrence. To assess the clinical relevance of CUEDC2, we analyzed the survival follow-up information, and the result showed CUEDC2-positive expression was associated with a shorter disease-free survival time. Considering the effect of histopathological grade to relapse, we analyzed the relationship of CUEDC2 expression and the prognosis in LGSC and HGSC group, respectively. The results showed that the CUEDC2-positive cases had shorter DFS time tendency compared to CUEDC2-negative cases in both groups; the reason for no statistically significant difference was possibly due to insufficient samples with follow up data.

In previous study, Pan reported that subjects with breast cancer highly expressing CUEDC2 had a dramatically weaker responsiveness to tamoxifen treatment and a greater likelihood of relapse. For the subjects who received tamoxifen, those with tumors that highly expressed CUEDC2 showed significantly poorer DFS and OS than those with low CUEDC2 expression [22]. Our result is consistent with their findings. Thus, CUEDC2 might be a novel marker for predicting likely relapse in ovarian serous carcinoma patients. However, multivariate survival analysis showed CUEDC2 was not an independent predictor of poor disease-free survival of patients undergoing curative resection. The reasons for this result may be related with the insufficient follow-up data, 27 samples were lost due to various reasons in the study.

There was strong epidemiological evidence that etiology, pathogenesis, and progression of ovarian cancers were greatly dependent on the activity of estrogens [23]. Studies provided some evidence that the chance of a clinical response to therapy was directly related to ER expression of ovarian cancer tissues [24]. Studies found that CUEDC2 bound both the progesterone receptor (PR) and ERα, resulted in degradation of these receptors and reduction of ligand activated gene transcription [25-26]. CUEDC2 may be a potential biomarker for endocrine therapy of ovarian serous carcinomas. The focus of our next study will be analysis of the relationship among CUEDC2, ER, PR and p53.

In summary, the current study is a pilot assessment. We reported here for the first time that CUEDC2 expression was seen in 59.4% of serous ovarian carcinoma and was correlated with histological grade, FIGO stage and recurrence. It is indicted that CUEDC2 might be a promising biomarker to evaluate the progression of serous ovarian carcinoma and to predict likely relapse of ovarian serous carcinomas.

We thank Professor Xuemin Zhang for his generous donation of the antibody to CUEDC2, Mr. Changhe Wang for his assistance with statistical analysis. This work was supported by Science & Technology Innovation Fund of PLA General Hospital (No.13KMM47).