Nasopharyngeal carcinoma (NPC) is endemic in Southern China, with an incidence of approximately 20-30 per 100 000 [1, 2]. Radiotherapy is the mainstay of treatment for NPC [3]. The wide-spread adoption of intensity-modulated radiotherapy (IMRT) has revolutionized the management of NPC [1, 4-6]. However, vast inter-individual differences in treatment outcomes are observed among patients with same TNM (tumor-node-metastasis) stage of NPC. One possible explanation is that the TNM staging system does not accurately reflect intrinsic biological heterogeneity. Therefore, identification of objective and well-validated prognostic biomarkers may the complement TNM staging system and improve current treatment strategies for patients with NPC.

Accumulating evidence indicates that systemic inflammation plays important roles in the progression and prognosis of a variety of malignancies [7]. Recently, inflammation-based prognostic scores, including the modified Glasgow Prognostic Score (mGPS), Glasgow Prognostic Score (GPS), platelet to lymphocyte ratio (PLR) and neutrophil lymphocyte ratio (NLR), have been reported to have prognostic value in NPC [8-10].

The clinical characteristics of NPC patients treated at Zhejiang Provincial Cancer Hospital, between January 2007 and December 2012 were reviewed retrospectively using medical records. This study was approved by the institutional ethical review board of Zhejiang Provincial Cancer Hospital. The inclusion criteria were as follows: (1) histologically-proven NPC; (2) no history of malignant disease; (3) no evidence of distant metastasis; and (4) no clinical evidence of infection or inflammatory conditions. A total of 719 NPC patients were included in the final evaluation.

Routine pre-treatment workup included a complete history, physical examination, hematology and biochemistry analyses, endoscopic examination of the nasopharynx, magnetic resonance imaging (MRI) of the nasopharynx and neck, chest radiography, abdominal ultrasonography, whole body bone scan. All patients were restaged according to the 7th edition of the American Joint Commission on Cancer (AJCC) staging system [13]. For evaluation of C-reactive protein (CRP) and serum albumin levels, the blood test results performed prior to initial treatment were used. The CRP/ALB ratio was calculated by dividing the serum CRP level by the serum albumin level [14].

All patients received IMRT combined with or without concurrent chemotherapy. The target volumes were delineated according to the institutional treatment protocol, which was based on International Commission on Radiation Units and Measurements reports (ICRU) 50 and 62. The prescribed radiation dose-range was a total dose of 69-69.9 Gy (30-33 fractions) to the primary gross tumor volume (GTV), 67.5-69.9 Gy to the positive lymph nodes (GTVnd), 60 Gy to the PTV of CTV-1 and 54 Gy to the PTV of CTV-2. All patients were treated with daily fractions over five days per week using a linear accelerator (6-8 MV).

Patients were regularly followed-up in our hospital. A physical examination, nasopharyngeal and neck MRI, nasopharyngoscopy, blood test, chest X-ray and abdominal sonogram were performed routinely every three months in the first three years, and every six months in the fourth to fifth years. The cutoff date of last follow-up was December 31st, 2014; the median follow-up duration was 48 months (range, 3-89 months).

Comparisons between groups were performed using the Mann-Whitney U test and Student's t-test for continuous variables and the Chi-square test for categorical variables.

The primary endpoint was overall survival (OS), which was calculated as the time from the first day after completion of radiotherapy to the date of death or censorship during follow-up. Receiver operating characteristic (ROC) curves were generated to select the optimal cutoff point with the highest Youden's index for OS. Survival curves were plotted using the Kaplan-Meier method and the log-rank test was used to assess the differences between survival rates. The Cox proportional hazards model was performed to analyze prognostic factors associated with OS. A two-tailed P value < 0.05 was considered statistically significant. All statistical analyses were performed using SPSS v18.0 (SPSS, Chicago, IL, USA).

Receiver operating curve (ROC) analysis of the CRP/ALB ratio for survival status among the 719 patients with NPC. The optimal cutoff value was 0.141 (sensitivity: 86.4%; specificity: 57.5%) according to the ROC analysis. 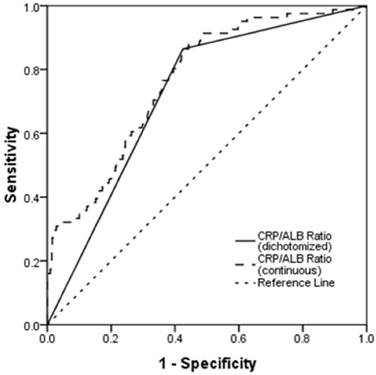 The correlations between the CRP/ALB ratio and continuous serum variables are shown in Table 2. Patients with a higher CRP/ALB ratio (≥ 0.141) had higher white blood cell counts (P = 0.018), a higher percentage of lymphomonocytes (P = 0.027) and a higher percentage of natural killer cells (P = 0.028) in comparison with patients who had a CRP/ALB ratio < 0.141. There were no significant differences in neutrophil granulocytes, lymphocytes, hemoglobin, platelets or serum lactic dehydrogenase between the two groups.

Baseline characteristics of the study population of 719 patients with NPC. 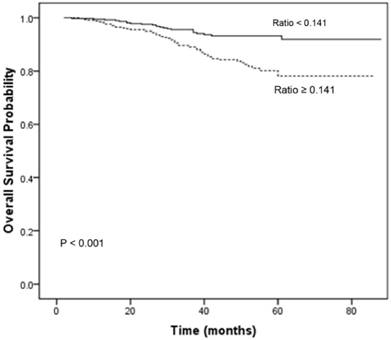 Relationship between the CRP/ALB ratio and the serum continuous variables of the 719 patients with NPC.

Univariate and multivariate analysis for overall survival (OS) for the 719 patients with NPC. 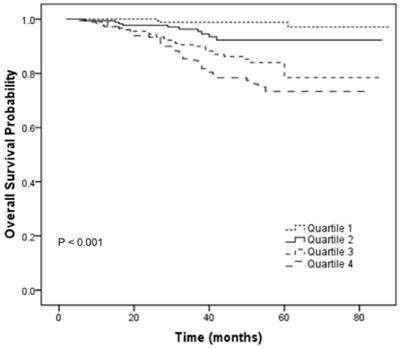 In this study, we retrospectively analyzed 719 eligible patients and found that the CRP/ALB ratio was an independent prognostic factor for OS in patients with NPC treated with IMRT. To our best knowledge, this is the first study to investigate the prognostic value of the CRP/ALB ratio in NPC patients receiving IMRT.

Accumulating evidence has clarified the important role of systemic inflammation in the prognosis of patients with cancer [15]. In addition, inflammation can be promoted by inflammatory cytokines produced by cancer cells in the tumor microenvironment [16]. Moreover, inflammatory cells may promote cancer metastasis by adhering molecules and chemokines [17].

Several inflammation-based prognostic scores (GPS, mGPS etc.) which combine serum CRP and albumin levels have been explored as prognostic factors for the outcomes of patients with various types of cancer, especially cancers of the digestive tract. However, in contrast to other malignancies, the majority of patients with NPC have good performance status and nutritional status at diagnosis. In this study, only four patients (0.5%) had hypoalbuminemia at diagnosis. The fact that few patients with NPC have hypoalbuminemia before treatment limits the application of other prognostic scores that classify patients into categories based on the presence or absence of hypoalbuminemia, such as the GPS and mGPS. Conversely, the CRP/ALB ratio is a continuous variable that not only reflects systemic inflammation and nutritional status, but is also calculated using two continuous variables (CRP level and serum albumin level), which could reduce the potential for underestimation or overestimation and stratify patients to predict survival more accurately. The CRP/ALB ratio was originally developed by Fairclough et al. to predict the patient outcome [14]. The CRP/ALB ratio has been identified as an independent prognostic factor in several malignancies, including hepatocellular carcinoma [11], esophageal cancer [12], pancreatic cancer [18] and small cell lung cancer [19]. Furthermore, Ranzani et al. revealed the CRP/ALB ratio was more accurate than CRP level alone for predicting mortality in patients with sepsis [14]. In this study, the optimal CRP/ALB ratio cutoff value of 0.141 was applied to predict OS, and we observed that the CRP/ALB ratio was significantly associated with OS in patients with NPC who received IMRT.

The CRP/ALB ratio indicates the interactive relationship between systemic inflammatory responses and dystrophia. The mechanisms that regulate the association between the CRP/ALB ratio and the survival of patients with cancer are not yet completely elucidated. Several explanations have been proposed. Firstly, an elevated CRP level generally suggests the presence of a systemic inflammatory response [15]. Tumor invasion and tumor cell necrosis could promote an inflammatory response in itself [20]. Marsik et al. indicated that 10-year all-cause mortality of patients with a higher CRP level (> 80 mg/L) was almost 30% and that a highly elevated CRP level was associated with significantly higher mortality due to cancer, non-cancer or all-cause vascular diseases after retrospective analysis of 274, 515 patients [15]. In addition, most patients with NPC are infected with the Epstein-Barr virus (EBV), which has been confirmed as a prognostic factor in NPC [21, 22]. Infection by EBV could stimulate the production of inflammatory cytokines including interleukin (IL)-1, IL-6, IL-8, vascular endothelial growth factor (VEGF) and tumor necrosis factor (TNF)-α, which could induce CRP synthesis in the liver and reduces the levels of albumin produced by hepatic cells [23, 24]. Furthermore, tumor-associated leukocytes and/or cancer cells could also release these aforementioned inflammatory cytokines, which in turn could promote tumor invasion and metastases, subvert the host immune response and led to increased resistance to chemotherapy based on cytotoxic drugs [16, 25-27].

It is noteworthy that these findings may have important implications for individualized treatment and surveillance of patients with NPC. Patients with an elevated CRP/ALB ratio may require closer follow-up and may also benefit from nutritional support and anti-inflammatory therapy [28, 29]. Furthermore, Mocellin et al. demonstrated that supplementation with encapsulated fish oil (providing 600 mg/day of eicosapentaenoic acid and docosahexaenoic acid) could decrease the CRP/ALB ratio and potentially reduce weight loss in patients with colorectal cancer [30]. Although the CRP/ALB ratio appears to accurately stratify patients with NPC on the basis of OS and has the potential to inform treatment selection, the CRP/ALB ratio should be combined with the standard TNM staging system instead of replacing it.

This study has several potential limitations. This analysis was inevitably biased by its retrospective nature and the fact it was a single-institution study. It is also worth noting that patients with NPC may have co-morbidities that could raise the serum CRP level and affect albumin and other biochemical parameters. In addition, data on plasma EBV DNA concentrations was not assessed in this study because EBV DNA copy number was not routinely determined for this cohort of patients. However, this study was based on a large, homogeneous population of patients with NPC who received IMRT.

In conclusion, this study demonstrates that the CRP/ALB ratio is an independent prognostic factor for overall survival patients with NPC who receive IMRT. As a readily-available and easily-measurable biomarker, combination of the CRP/ALB ratio with the conventional TNM staging system should be explored to predict survival more accurately in patients with NPC receiving IMRT.

13. Edge SB, Compton CC. The American Joint Committee on Cancer: the 7th edition of the AJCC cancer staging manual and the future of TNM. Annals of surgical oncology. 2010;17:1471-4