Methods: 182 LD SCLC patients successfully treated with definitive CRT were retrospectively reviewed. TRT was applied concurrently or sequentially. Impact of the treatment mode and interval of simultaneous treatment (IST) (an interval in days when chemotherapy and TRT were applied simultaneously, including time between chemotherapy cycles and weekends) on OS was analysed.

Conclusion: In this real-life LD SCLC patient cohort, improved overall survival was achieved in patients treated with CRT schedule according to the IST > 0 and < 35-day concept. By exceeding the 35-day interval, we have seen deterioration in survival.

Lung cancer is the leading cause of cancer-related death worldwide with the second highest incidence in both genders. SCLC is a highly aggressive neoplasia and accounts for 13% to 15% of total lung cancer diagnoses [1]. SCLC is characterised by rapid doubling time, early systemic dissemination and high sensitivity to chemo- and radiotherapy [2-4]. At initial diagnosis, only 30% patients present with LD. Actual median survival and a 2-year survival rate in patients with LD varies from 15 to 20 months and 20% to 40%, respectively [5].

Due to rapid loco-regional failures after chemotherapy alone, the adjunction of TRT was investigated and showed improved local control and better long-term outcome [6-8]. Hence, multimodality treatment consisting of platinum-based chemotherapy and TRT has become the standard of care [5,9,10]. Multiple clinical trials and meta-analyses addressing the issue of timing of TRT have been published, with the weight of evidence suggesting a small benefit for early TRT (i.e. TRT administered during the first or second cycle of chemotherapy) [11-21]. The meta-analysis by De Ruysscher et al. revealed that a short time between the first day of any treatment and the last day of TRT is associated with improved OS [21]. However, the latest published randomised phase III study investigating the timing of TRT during the course of chemotherapy in LD SCLC found no differences in the remission rates and overall survival between early (starting with first) and late (starting with the third cycle of chemotherapy) irradiation groups [22]. Our previous study in LD SCLC demonstrated that short and dose-dense CRT correlated with improved overall survival in patients with poor initial performance status (PS) [23].

The aim of the present analysis was to evaluate an impact of the chemoradiotherapy schedule parameters on overall survival in a real-life heterogeneous patient cohort and define a role of IST as a treatment related prognostic factor.

182 patients from two institutions in Germany with initial PS score WHO 0-3 were diagnosed with LD (UICC Stage I-IIIA/B) SCLC and successfully treated with definitive CRT in the time from 1998 to 2012. Diagnosis was histologically confirmed in all patients. LD was defined according to Murray et al. as disease confined to one hemithorax with or without contralateral mediastinal and ipsilateral supraclavicular lymph node involvement [24]. Evidence of pleural effusion and involvement of the contralateral supraclavicular and/or hilar lymph nodes was considered to be an exclusion criterion [25]. In all patients initial staging included bronchoscopy with biopsy, computed tomography (CT) scans of the chest and abdomen, bone scintigraphy and first contrast-enhanced cranial magnetic resonance imaging (MRI). All patients provided written informed consent prior to commencement of primary treatment. CRT was applied concurrently in seventy-one (39%) patients and consisted of TRT starting with the first or second cycle of chemotherapy followed by consolidation cycles. One hundred and eleven (61%) patients were treated sequentially with four to six chemotherapy cycles followed by TRT. Chemotherapy was given in a 28-day cycle in patients treated with concurrent and in a 21-day cycle in patients treated with sequential CRT according to Takada et al. [14]. TRT was delivered by linac with megavoltage capability (8-15 MV) using coplanar multiple field technique. Three-dimensional CT-simulated treatment planning was performed in all patients. Planning target volume was defined as a primary tumour bulk including involved lymph nodes visualised on the pre-therapeutic CT with 1.0cm margin. 96% of the patient cohort was treated 5 days a week with conventional fractionation to a total dose of at least 50.0 Gy (range: 50.0 - 66.0 Gy). 4% of patients were treated with hyperfractionated accelerated TRT according to Turrisi et al. [18]. Second contrast-enhanced cranial MRI was routinely performed before commencing PCI to exclude BM according to Manapov et al. [26]. PCI was applied with a daily fraction of 1.8/2.0 Gy to a total dose of 30.0 to 36.0 Gy. Patients were followed every 3 months for the first two years and every 6 months thereafter. Response evaluation was performed by a radiologist based on CT of the thorax and abdomen. Other imaging techniques including FDG-PET/CT were applied if clinically indicated.

Due to the fact that the majority of patients died, there is no median follow-up; hence, follow-up was as complete as possible. Survival rates were measured from initial diagnosis. Kaplan-Meier analyses (pair-wise comparisons) were used to compare survival curves for subgroups according to the definition of IST (IST 0 vs. > 35 vs. < 35). IST was also analysed for its association with OS by multivariate Cox regression after adjustment for other prognostic factors.

In total, the medical charts of 182 patients were reviewed (See Table 1 for Patients and treatment characteristics). Of 182 patients treated, 110 (60%) were men and 72 (40%) were women. Median age at diagnosis was 63 years (range: 35 - 83). 34 (19%) patients were older than 70 years. Median PS according to WHO for the entire cohort was 1 (range: 0 to 3). 71 (39%) patients were treated with CRT concurrently vs. 111 (61%) sequentially. There were no significant differences in regard to age, sex, PS and TNM-stage between both CRT groups. Platinum-based chemotherapy was applied in 162 (89%) patients. 36 (20%) patients were treated with less than four cycles of chemotherapy. PCI was applied in 71 (39%) patients, who achieved partial or complete remission. Median duration of TRT was 43 days and was equal in both groups. Median duration of chemotherapy was 128 and 93 days in the concurrent and sequential groups, respectively.

Definition of The Interval of Simultaneous Treatment

IST was defined as an interval in days when chemotherapy and TRT were applied simultaneously, including time between chemotherapy cycles and weekends (Figure 1). Possible IST variants referring to the applied CRT schedules in our patient cohort are illustrated in Figure 2. Different IST values (30, 35, 42 and 49 days) have been tested. IST 35 was analysed after consideration of the TRT duration including a subset of patients treated according to Turrisi et al. and patient distribution in the different IST subgroups. Also a relevant point was that lST 35 included two completed chemotherapy cycles applied concurrently to TRT. The start of TRT during the course of chemotherapy was not the subject of this investigation. All patients treated with sequential CRT were referred to the IST 0 subgroup.

Definition and Variations of IST

IST variants in the patient cohort 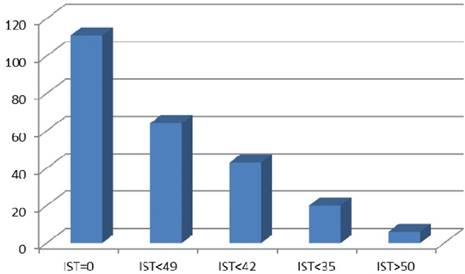 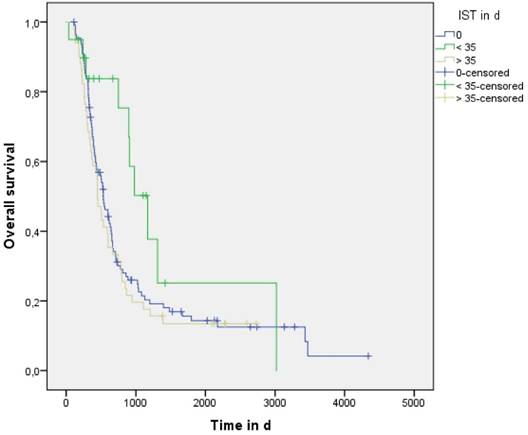 The main finding of this temporal CRT schedule analysis of a real-life heterogeneous LD SCLC cohort is that improved overall survival was attained when both chemotherapy and TRT were applied simultaneously in the multimodality treatment course in a time interval not exceeding 35 days (IST > 0 and < 35). Importantly, application of CRT schedule according to the IST > 0 and < 35 concept has led to more than a doubling of the MS compared to the rest of the treated cohort. Another relevant point was that the start of TRT (early vs. late) during the course of multimodality treatment was not a limiting factor but rather a subject of this investigation.

CRT schedule is considered an important treatment-related factor in LD SCLC since several meta-analyses reported significantly improved survival rates when early platinum-based concurrent CRT is applied and overall treatment time of TRT is less than 30 days. Furthermore, the meta-analysis by De Ruysscher et al. revealed that short time between the first day of chemotherapy and the last day of TRT (SER) is an important predictor of survival and defined a short SER (<30 days) as a pre-requisite for favourable long-term outcome. The novel parameter SER was established to take into account accelerated proliferation of the tumour clonogens during both radio- and chemotherapy. The authors concluded that SER might facilitate the design of future combined-modality treatment trials [21]. The role of short SER (< 30 days), however, was not confirmed in the last published randomised phase III trial investigating the timing of TRT. The study could not find any differences in the remission rate, progression-free and overall survival between early (starting with the first) and late (starting with the third chemotherapy cycle) irradiation arms [22]. These results have excited a discussion about the exact definition of short SER. A small korean study defined short SER as less than 60 days and reported a correlation between short SER and improved survival [27]. Another relevant aspect is the utility of hyperfractionated accelerated CRT in daily clinical practice. A previous analysis by Komaki et al. showed that 21% of LD SCLC patients from 39 institutions in the United States treated from 2006-2007 received twice-daily CRT according to the Turrisi et al. protocol [28]. In this present cohort, the rate was much lower (4%). Furthermore, our previous analysis demonstrated that duration of CRT, itself, correlated with overall survival in limited LD SCLC patients with poor initial PS [23]. Considering all of these points, we decided to analyse a value of IST and not SER in our heterogeneous cohort.

Two major limitations of the present investigation are its retrospective nature and an absence of toxicity analysis. Hence, comparison of treatment-related morbidity in the various IST subgroups was not possible. According to previous data, a higher rate of acute toxicity in CRT protocols with short SER is strongly supposed [16,20,21]. Additional analysis of the value of IST in the multimodality treatment of LD SCLC will come from two ongoing randomised phase III trials that compare different TRT protocols [29,30]. The final publications of both trials are eagerly awaited.

IST as a new treatment-related parameter can be referred simultaneously to the dose-intensity and patient compliance during the course of chemoradiotherapy. Our temporal analysis of CRT schedule in a real-life LD SCLC patient cohort found that IST > 0 and < 35 days significantly correlates with improved overall survival. By exceeding this interval, we have seen deterioration in patient long-term outcome.

Sabine Kloecking of the cancer registry of the University Hospital Rostock for her assistance in the data collection.

The authors declare they have no competing interests.