Glioma is the most prevalent primary brain tumor in the central nervous system (CNS) and is characterized by high recurrence and mortality rates [1, 2]. Gliomas are generally categorized into four grades (I-IV) based on the World Health Organization (WHO) classification, including pilocytic astrocytoma (PA), diffuse astrocytoma (DA), anaplastic astrocytoma (AA) and glioblastoma (GBM) [3]. Despite considerable progresses in the application of comprehensive treatment strategies for glioma patients, the 5-year survival rate still remains poor [4, 5]. Therefore, valuable genomic biomarkers with increased sensitivity and reliability are critically required for predicting clinical outcomes and establishing new therapeutic and preventive strategies for gliomas.

Gene amplification is considered as a pivotal molecular process of tumorigenesis through increasing gene copy number and subsequently activating the oncogenic potential of proto-oncogenes [6]. Similar to other tumors, glioma is characterized by changes in the expression of oncogenes and tumor suppressor genes due to numerical chromosomal abnormalities such as genomic gains and losses [7-10]. Molecular profiling of glioblastoma has recently demonstrated that expression of ~76% of genes with recurrent genomic copy number alterations (CNAs) is closely correlated with their copy number [7].

AIB1 (also known as steroid receptor coactivator-3, SRC-3) is a member of the p160 steroid receptor coactivator family. It is well-known that AIB1 plays an oncogenic function in tumorigenesis by affecting several important carcinogenic signaling pathways [11, 12]. In recent years, AIB1 has been reported to be frequently amplified in different types of cancer such as breast, ovarian, esophageal, colorectal, hepatocellular, gastric, pancreatic, bladder, nasopharyngeal and non-small-cell lung cancers (NSCLC) [12-20], and this genetic event is correlated with poor prognosis, aggressive tumor phenotype, progression and metastasis of tumors [21-23]. A recent study has revealed that AIB1 protein levels are much higher in high-grade astrocytomas than that in low-grade astrocytomas [24]. However, the prognostic significances of AIB1 genomic amplification in gliomas remain totally unclear.

In this study, AIB1 copy number was investigated in a cohort of gliomas and control subjects using qPCR approach. In addition, the correlation between AIB1 amplification and clinical outcomes of glioma patients was also explored in this study.

A total of 115 glioma patients and 16 benign meningiomas as control subjects (10 females and 6 males, age 54.6 ± 7.1 years), who underwent surgery for brain tumors at the Department of Neurosurgery of First Affiliated Hospital of Xi'an Jiaotong University from 2006 to 2012, were randomly enrolled in this study. All patients did not receive radiotherapy or chemotherapy prior to surgery. Glioma patients received adjuvant radiotherapy and/or chemotherapy after surgery according to standard clinical protocols. All samples were histopathologically classified according to the WHO classification criteria. Overall survival was calculated as time duration starting from surgery until cancer-related death or last follow-up. Clinicopathological data of patients were presented in Table 1. All of the patients were enrolled after providing a written informed consent. This study was approved by the institutional review board.

Formalin-fixed paraffin-embedded tissues were cut at 5 mm, and stained by hematoxylin and eosin (H&E). Tumor representative tissues were marked in each section by an expert cancer pathologist. Manual microdissection was carried out under an inverted light microscope by using the marked sections. DNA was extracted according to a previously described protocol [25]. In brief, the sections were first treated with xylene for 12h at room temperature for deparaffinization, followed by digestion with 1% sodium dodecylsulfate (SDS) and proteinase K at 48°C for 48h. Genomic DNA was then isolated from these tissues using a standard protocol.

The primer and TaqMan probe sequences used in this study.

Copy number of AIB1 was analyzed in gliomas and control subjects by a well-established real-time quantitative PCR approach, which was previously validated by fluorescence in situ hybridization (FISH) [26, 27]. Primer Express 3.0 software (Applied Biosystems, Foster City, CA) was utilized to design specific PCR primers and TagMan probes for the amplification of AIB1 gene and internal control β-actin. TaqMan probes were labeled at the 5' end with a fluorescent reporter 6-carboxyfluorescein (6FAM) and at the 3' end with a fluorescent quencher 6-carboxy-tetramethylrhodamine (TAMRA). The sequences were presented in Table 2. The PCR reaction was performed according to a previously described protocol [26]. Each sample was run in triplicate, and β-actin was performed in parallel to normalize the input DNA. Serially diluted leukocyte DNA was used to establish standard curves. DNA copy number was calculated as previously described [27, 28]. A copy number ≥3.5 was defined as gene amplification (or copy gain).

Statistical analysis was performed using the SPSS 11.5 software (Chicago, IL, USA). P value <0.05 was considered statistically significant. Mann-Whitney U-test was applied to compare the copy number of AIB1 between gliomas and control subjects. SPSS 11.5 software was used to univariately analyze the correlation of AIB1 copy number and clinicopathological features. Multivariate analysis was performed to calculate multivariable-adjusted odds ratios (ORs) and 95% confidence intervals (CIs) for AIB1 copy number, and other factors such as age, recurrence, radiotherapy and epilepsy. Cancer-related survival was calculated from the date of the operation to cancer-related death or last follow-up. Kaplan-Meier survival analysis was performed to evaluate the effect of AIB1 amplification on patient survival. Log-rank test was used to analyze the differences between curves. The impact of AIB1 amplification on the independent survival of age, radiotherapy and WHO grade was determined by multivariate Cox regression analysis.

The copy number of AIB1gene was examined in a cohort of gliomas and control subjects using qPCR assay. As shown in Figure 1, glioma patients exhibited significantly higher copy number of AIB1 than the controls (meningioma patients) (Median, 2.78 copies vs. 1.99 copies; P =0.0003). When a copy number of ≥3.5was considered as gene amplification, we found AIB1 amplification in 28/115 (24.3%) gliomas, whereas none in control subjects. To test the relationship between of AIB1 copy number and its mRNA expression, we analyzed the corresponding data in a total of 435 low-grade gliomas using The Cancer Genome Atlas (TCGA) dataset from the Cancer Browser database (https://genome-cancer.soe.ucsc.edu). We divided all cases into low copy (L)-, median copy (M)- and high copy (H)-groups by use of two cutoff points (the 25 and 75 percentile of AIB1 copy number). As shown in Figure 2A, mRNA expression of AIB1 in H-group was significantly higher than that M- and L-groups. Given that chemotherapy and radiation therapy may affect mRNA expression of AIB1, we only analyzed their association in the cases who did not receive any therapy. Similar to the findings in Figure 2A, we still found a high mRNA expression of AIB1 in H-group compared with M- and L-groups (Figure 2B). 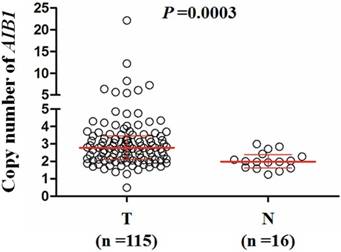 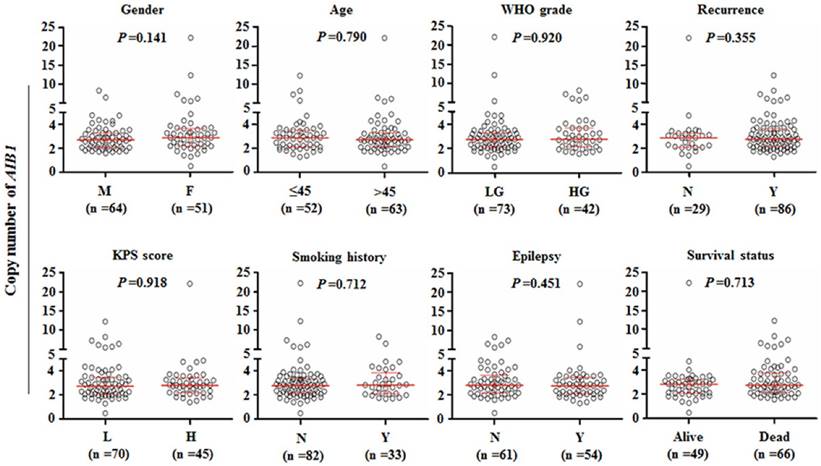 Next, we analyzed the AIB1 copy number grouped by the indicated clinicopathological features such as gender, age, WHO grade, tumor recurrence, Karnofsky performance status (KPS) score, smoking history, epilepsy and survival status. As shown in Figure 3, our data did not show significant relationships between AIB1 copy number and clinicopathological features. However, we noted that copy number of AIB1was slightly higher in female patients than male patients (Median, 2.87 copies vs. 2.69 copies).

Association of AIB1Copy Number with Clinicopathological Features in Gliomas

Effect of AIB1Amplification on Poor Survival of Glioma Patients 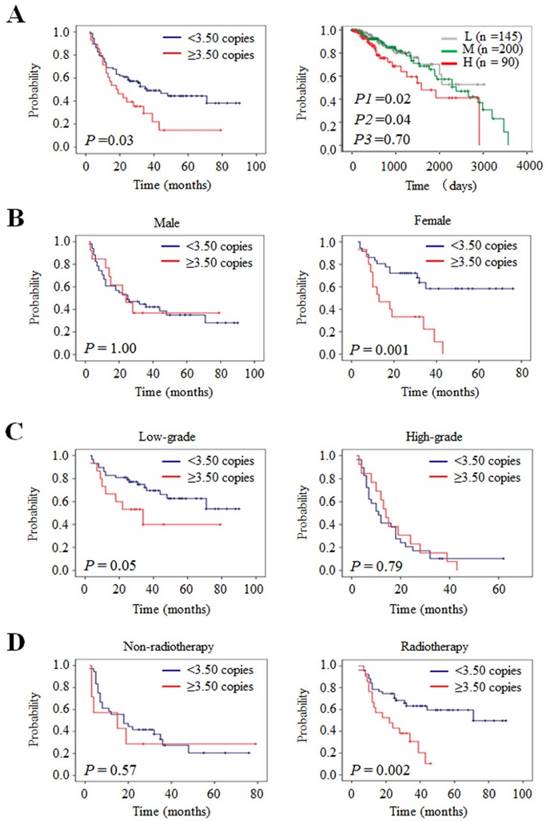 Effect of AIB1Amplification on Radiotherapy Outcome of Glioma Patients

Malignant glioma, a common primary tumor of central nervous system, is characterized by complex molecular heterogeneity and associated with poor clinical outcomes of patients [2, 28]. Therefore, understanding the underlying molecular disease mechanisms may lead to better management and appropriate therapeutic strategies to improve clinical outcomes of glioma. Gene amplification is a well-known prevalent mechanism of oncogene overexpression in human cancers [6]. Recent genomic studies in gliomas have shown frequent changes in DNA copy number, resulting in high levels of chromosomal instability [7, 29]. As a critical oncogene, AIB1 amplification has been widely found in different types of cancer [30]. However, the association of AIB1 amplification with therapeutic outcomes of glioma patients, and prognostic value of AIB1 amplification in gliomas remains totally unknown. In the present study, we compared the copy number of AIB1gene between glioma patients and control subjects, and determined the prognostic significance of AIB1amplification in gliomas. Our data showed that AIB1 was frequently amplified in gliomas, but not in control subjects. Moreover, our data showed that female glioma patients had higher AIB1 copy number as compared to male patients. This was supported by a previous study that female patients had higher AIB1 expression than male patients in NSCLC [31]. Another study demonstrated that there was a significantly higher AIB1 expression in high-grade astrocytomas than that in low-grade astrocytomas, and high AIB1 expression was associated with poor prognosis [24]. These results suggest that AIB1 amplification is likely involved in glioma tumorigenesis.

AIB1as a steroid receptor coactivator of estrogen and progesterone receptors can enhance the transcription of target genes through being recruited to their promoters or enhancers via nuclear receptors [12, 32, 33]. In addition, there is evidence showing that estradiol can enhance the transcriptional activity of AIB1 through increasing its phosphorylation and decreasing its sumoylation [34]. Estradiol also promotes the proliferation of astrocytoma cells through estrogen receptor-α (ERα) and its interaction with AIB1 [35]. It is the fact that AIB1 interacts with ERα, and subsequently binds to ERα-binding site on the promoter of SNAI1, a transcriptional repressor for E-cadherin, to promote the transcription of SNAI1and repress E-cadherin expression, ultimately leading to the initiation and progression of epithelial mesenchymal transition (EMT) [36]. Thus, we speculate that specific role and prognostic value of AIB1 amplification in female glioma patients may be related to sex hormones and nuclear receptor levels.

Further analysis revealed that AIB1 amplification was only related to poor patient survival in low-grade tumors, but not in high-grade tumors. Moreover, AIB1 copy number did not show a significant difference between them. These findings indicate that AIB1 amplification may be an early molecular event, and may affect the prognosis in early stage of glioma tumorigenesis. Interestingly, we observed that AIB1 amplification significantly impacted radiotherapy outcome in glioma patients. Similar to these findings, a previous study showed that AIB1 was related to chemo-radiotherapy (CRT) response in esophageal squamous cell carcinoma (ESCC). Compared to the CRT-effective group, AIB1 overexpression was more frequently found in the CRT-resistant group [37]. However, the underlying molecular mechanism is still unknown. The PI3K/AKT/mTOR signal pathway has been identified as the predominant downstream pathway of AIB1 [38, 39], contributing to radioresistance in different types of cancer including glioma [40-47]. Thus, we speculate that the activation of PI3K/AKT pathway may be one of molecular mechanisms underlying AIB1-induced radiotherapy resistance.

This work was supported by Key Science and Technology Program of Shaanxi Province (No. 22015SF036), and the Fundamental Research Funds for the Central Universities.