The Impact of Clinical Stage on Radiation Doses to Organs at Risk Following Intensity-modulated Radiotherapy in Nasopharyngeal Carcinoma: A Prospective Analysis

Background: The development of intensity-modulated radiotherapy (IMRT) has revolutionized the management of nasopharyngeal carcinoma (NPC). The purpose of this study was to investigate the impact of clinical stage on radiation doses to organs at risk (OARs) in NPC.

Material and Methods: One hundred and forty-eight patients with newly diagnosed and untreated NPC were prospectively enrolled. Based on the anatomic definition and pathogenesis of radiation induced injury, a total of 28 OARs surrounding the nasopharynx were contoured on axial computed tomography (CT) planning images in each patient. Dose-volume histograms, as well as the mean and maximal doses for each structure, were calculated.

Results: Radiation doses to 15 OARs (including the brain stem, temporal lobe and eye) were positively correlated with T stage, the radiation doses to 13 OARs (including the brachial plexus, parotid and thyroid) increased significantly with N stage, and the radiation doses to the spinal cord and mandible had no association with T or N stage. Based on the characteristic of excess rates, 9 OARs (e.g. spinal cord, eye, trachea, and et al.) met tolerance doses easily in all stages, 9 OARs (e.g. brain stem, temporal lobe, brachial plexus, and et al.) easily in early stages but with difficulty in advanced stages, and 10 OARs (e.g. cochlea, parotid, thyroid, and et al.) with difficulty in all stages.

Nasopharyngeal carcinoma (NPC) is endemic in particular regions such as Southeast Asia, and the annual incidence varies from 30 to 80 per 100,000 people in South China [1-2]. Radiotherapy is the preferred therapeutic modality for non-metastatic NPC.

Although intensity-modulated radiotherapy (IMRT) provides excellent loco-regional control and sparing of organs at risk (OARs) in NPC [3-5], late toxicities such as grade 2 to 4 xerostomia and sensorineural hearing loss still occur with incidences of 39.3% and 37.0%, respectively [5-6]. Thus, improvements in OARs sparing and reduction in radiation toxicity remain important issues. Given the lack of studies, the characteristic of dosimetry distribution for OARs surrounding nasopharynx remains unclear.

On the basis of this premise, we prospectively enrolled 148 NPC patients and investigated the link between radiation doses to the OARs and clinical stages (T&N stage) in order to further reduce subsequent complications by improving the efficiency of plan optimization and evaluation.

All of the patients received definitive external irradiation. Target volumes were delineated using our institutional treatment protocol [7], in accordance with the International Commission on Radiation Units and Measurements reports 50 and 62 [8-9]. Magnetic resonance imaging (MRI) was used to help define the parapharyngeal and superior extent of the tumor. The prescribed dose was 70 Gy to the planning target volume (PTV) of the gross tumor volume (GTVp), 64-66 Gy to the PTV of the nodal gross tumor volume (GTVn), 60 Gy to the PTV of the clinical target volume-1 (CTVp1; high risk regions), and 54 Gy to the PTV of the CTVp2 (low-risk regions) and the CTVn (nodal regions in the neck) in 33 fractions. The PTVs of GTVp, CTVp1, and CTVp2 were named PTV_7000, PTV_6000, and PTV_5400, respectively. All patients were treated with one fraction daily, 5 days a week.

Characteristics of the 148 nasopharyngeal carcinoma patients.

The contouring atlas of target volume and OARs surrounding nasopharynx. 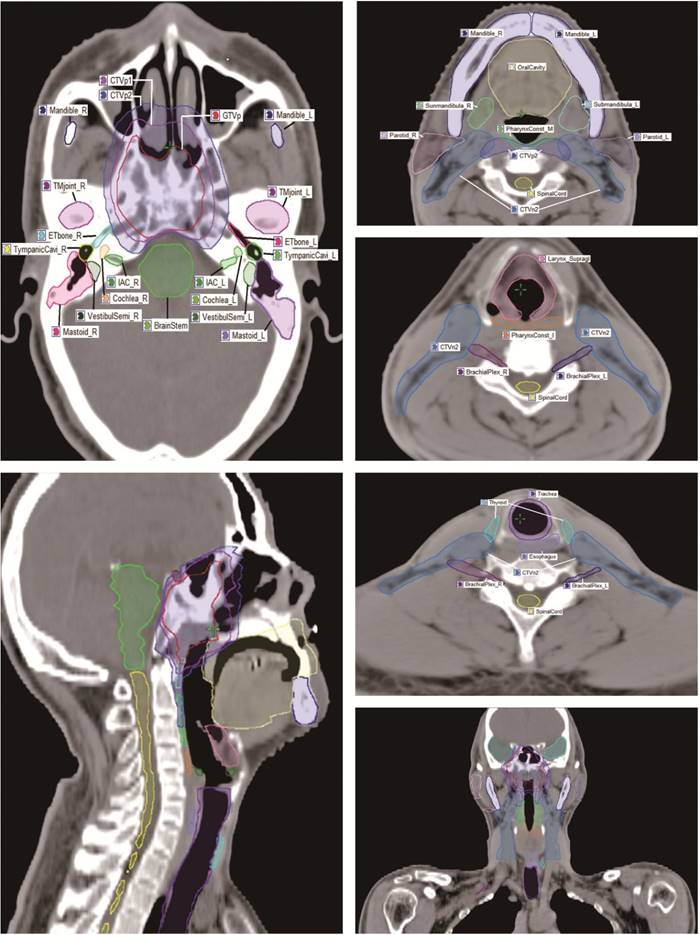 Plan evaluation of the target and OARs

The acceptance criteria for OARs used as the guidelines in defining planning objectives were depicted in QUANTEC-2010 (Quantitative analysis of normal tissue effects in the clinic, 2010) (Additional file: Table S2). The analysis included the maximum dose, the mean dose, and a set of appropriate VX (percentage volume receiving less/more than X Gy) and DY (dose received by Y volume) values. Besides the dose and dose-volume parameters in the dose constraints, the priority setting of different targets and structures are also an important parameter to achieve an optimal plan. For instance, high priorities should be given to critical structures and target volumes to ensure the dose limits of these critical structures are not exceeded and the dose coverage of the targets is adequate.

After radiotherapy completion, the patients were subsequently followed up monthly for the first 3 months, every 3 months through 3 years, every 6 months for the next 2 years, and then annually. The median follow-up period was 9.8 months (range, 5-16 months). Both the descriptive statistics of targeted radiation doses and the proportion of over-dose were calculated. Kruskal-Wallis rank sum test integrated with Nemenyi posthoc multiple comparison was applied to determine the relationship between radiation doses and T&N stage. A level of P < 0.05 was considered to indicate a statistically significant difference. All analyses were performed using R3.1.2.

Incidence of exceeding tolerance doses for OARs surrounding the nasopharynx.

Patterns of radiation doses to OARs

To quantify the characteristics of overdose in different stages, we analyzed the incidence of exceeding tolerance doses. OARs were initially classified into four risk grades: (Grade 0): excess rate <10%; (Grade 1): 10% ≤ excess rate <50%; (Grade 2): 50% ≤ excess rate <75%; (Grade 3): excess rate ≥75%. The excess rates of 9 OARs (e.g. spinal cord, mandible, TM joint, eye, oral cavity, glottic larynx, supraglottic larynx, inferior constrictor of pharynx, and trachea) were below 10% in almost all stages. The excess rates of another 9 OARs, including the brain stem, optic nerve, chiasm, temporal lobe, pituitary, lens, vestibule and semicircular canal, brachial plexus, and esophagus, were below 10% in early stage disease (T1-2&N0-1) while up to 90% in advanced stage disease (T3-4&N2-3). The excess rates of 10 OARs (cochlea, internal auditory canal, Eustachian tube, tympanic cavity, mastoid, parotid, submandibular, middle constrictor of pharynx, superior constrictor of pharynx, and thyroid) were up to 50-90% in almost all stages. Based on the characteristics of excess rates, OARs were initially classified into three patterns: Pattern 1): met tolerance doses easily in all stages; Pattern 2): met tolerance doses easily in early stages but with difficulty in advanced stages; and Pattern 3): met tolerance doses with difficulty in all stages (Table 4).

Today, IMRT is generally accepted as a more advanced radiation technique for the management of NPC. However, effective IMRT in sparing OARs around nasopharynx is largely unknown. Therefore, we conducted this prospective study in order to investigate the patterns of radiation doses to OARs. This study showed that 9 OARs (e.g. spinal cord, eye, trachea, and et al.) met tolerance doses easily in all stages, 9 OARs (e.g. brain stem, temporal lobe, brachial plexus, and et al.) easily in early stages but with difficulty in advanced stages, and 10 OARs (e.g. cochlea, parotid, thyroid, and et al.) with difficulty in all stages.

Our data showed that the radiation doses to some OARs were under the tolerance doses easily in all stages. In order to simplify clinical work, can we omit to contour such OARs? The answer may be no. For example, although radiation doses to the spinal cord were under the tolerance doses in almost all patients, the result may have been completely different if we had not contoured it because, in order to protect function, physicists tend to set an appropriate dose parameter for the spinal cord when they optimize the plan. If the spinal cord is not contoured, physicists will find it difficult to control the radiation doses to this OAR. In addition, the cervical spine has been shown to tolerance doses of 50 Gy in conventional fractionation, and higher doses have been associated with cord myelopathy in 35% - 50% of patients [11]. Therefore, we still cannot ignore the delineation of the spinal cord in clinical work. In this study, we used the spinal cord as an example to show the characteristic of this kind of OAR. Similar steps could be taken for the structure of the eye.

Our data also show that the radiation doses to other 7 OARs (including the mandible, TM joint, oral cavity, glottic larynx, supraglottic larynx, inferior constrictor of pharynx, and trachea) only exceed the tolerance doses by a small amount in early stages, and even in patients with stage T4 or N3 only 1.6% - 32.3% of patients exceed tolerance doses. This result suggests that present radiation technology could control the radiation dose to these OARs very well, especially in patients with early stage disease. The implication is that clinicians may not have to pay close attention to these OARs in the evaluation of plans, and to reduce the optimization burden of other OARs, physicists should try to give a relatively lower weighting parameter for those OARs.

Radiation doses were easily tolerated in patients with early stages, but with difficulty in advanced stages

Radiation doses were difficultly tolerated in all stages

It is well recognized that the probability of adverse events is proportional to the radiation dose of the corresponding OARs. For the 10 OARs in this group (e.g. the parotid, cochlea and tympanic cavity, et al.), the radiation dose exceeds tolerance doses severely in all stages, and the excess rate was even up to 100%; therefore, patients were likely to have a high incidence of adverse effects in the corresponding OAR. For example, in our study, we found that the mean dose of parotid and submandibular were beyond the tolerance doses in all patients. Although we did not calculate the occurrence of adverse events in our study, many previous studies have reported that radiation-induced xerostomia is the most common adverse event after radiotherapy, observed at a rate as high as 97.5% in NPC patients [13]. The factors underlying this observation may be interpreted as follows: the parotid gland has a high risk of relapse and clinicians are prone to delineate the part of the parotid into CTVp2, especially for patients with large retropharyngeal lymph nodes and II lymph nodes. For this kind of patient, we suggest that clinicians should additionally contour the normal parotid (outside the target areas), and should restrict the radiation dose to the normal parotid gland as much as possible.

The incidence rates for exceeding tolerance doses for some OARs based on the sites of tumor invasion. 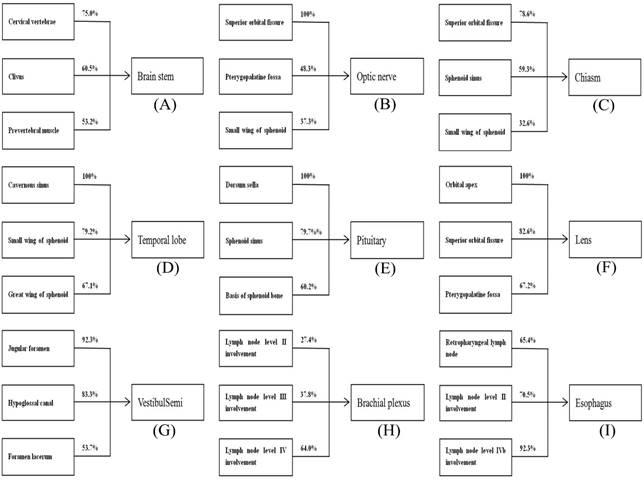 In this study, we delineated the OARs accurately and the physicists also optimized the radiation doses to the OARs; however, tolerance doses were exceeded to a great extent in some OARs. For example, the parotid has been shown to tolerate doses of 26 Gy, whereas the radiation doses to the parotid for patients with N0, N1, N2 and N3 stages were 30.97 ± 2.29 Gy, 34.67 ± 5.81 Gy, 35.08 ± 5.73 Gy, and 36.76 ± 6.28 Gy, respectively. The factors underlying this observation may be interpreted as follows. Firstly, the recommendation of dose constraints for this kind of OAR may not be suitable enough with current radiation technology. On the other hand, physicists are prone to sacrifice the radiation dose of low priority OARs (e.g. the cochlea, parotid, thyroid, etc.) in order to improve the radiation dose of the target coverage and limit the radiation dose to critical OARs, such as the temporal lobe and spinal cord.

The radiation doses to most of OARs are associated with T or N stage in NPC patients. Based on the characteristic of excess rate, 9 OARs (e.g. spinal cord, eye, trachea, and et al.) met tolerance doses easily in all stages, 9 OARs (e.g. brain stem, temporal lobe, brachial plexus, and et al.) easily in early stages but with difficulty in advanced stages, and 10 OARs (e.g. cochlea, parotid, thyroid, and et al.) with difficulty in all stages. According to the patterns of radiation doses to OARs, it may help us to further reduce subsequent complications by improving the efficiency of plan optimization and evaluation. However, the median follow-up time for all patients was only 9.8 months, thus late toxicity was not evaluated. As a result, the relationship between radiation doses of OARs and toxicities requires further study.

The authors declare that they have no conflict of interest.