Purpose: Circular RNAs (circRNAs), are a large class of RNAs that from a covalently closed continuous loop and have recently showed huge capabilities as gene regulators in mammals. Although Hsa_circ_0001451 has been investigated in colorectal cancer, it remains unclear about the relationship between Hsa_circ_0001451 and clear cell renal cell carcinoma (ccRCC). Our research aims to reveal the function of Hsa_circ_0001451 in the proliferation and development in ccRCC cells.

Methods: The expression of Hsa_circ_0001451 in 52 pairs of ccRCC tissues and paraneoplastic tissues was detected by quantitative real-time polymerase chain reaction (qRT-PCR). The correlation between Hsa_circ_0001451 and the clinicopathological features was evaluated using the chi-sequare test. Receiver operating characteristic (ROC) curve was built by SPSS to evaluate the diagnostic values. The effects of Hsa_circ_0001451 on ccRCC cells were determined via a MTT assay, clone formation assay, flow cytometry and Western blot analysis.

Conclusion: Taken together, our finding showed that Hsa_circ_0001451 might become a novel potential biomarker in the diagnosis of ccRCC and a potential novel target for the treatment of ccRCC.

It is well known that renal cell carcinoma (RCC) is viewed as one of the most common urological tumors, which gradually has risen to the ninth leading cause of cancers in the US [1,2]. Among the three major subtypes of RCC, approximately 95% are clear cell RCC (ccRCC), of which the total survival rate of five years is about 74% [3,4]. Some recent studies have revealed that age of patients, tumor grade, and TNM stage are both closely related to the prognosis of RCC [5,6]. Recently, mutations in PBRM1, BAP1 and SETD2 are identified to be the molecular biomarkers for the prognosis of RCC [7, 8]. Molecular biomarkers may not only predict prognoses but also provide useful tumorigenic characteristics for the development of novel anti-RCC therapies.

Circular RNAs (circRNAs) represent a large class of non-coding RNAs that exist widespread on the cytoplasm of eukaryotic cells [9,10], which often are characterized as a stable structure and high tissue specific expression [11]. Compared with linear RNAs, circRNAs exhibit the remarkable characteristic of undergoing non-canonical splicing without 5'terminal cap and 3' terminal poly (A) tail and forming a ring structure with covalent bonds [12,13]. Recently, it was reported that circRNAs function as miRNA 'sponges' that naturally sequester and competitively suppress miRNA activity [14]. Furthermore, it was demonstrated that circRNAs were involved in the development of several types of disease, such as atherosclerosis and nervous system disorders [15,16]. However, the role of circRNAs in pathogenesis of renal cell carcinoma is still unknown.

A total of 52 pairs of ccRCC tissue and adjacent normal tissue was collected from ccRCC patients who underwent radical nephrectomy at the First Affiliated Hospital of Harbin Medical University. All the samples were immediately snap frozen in liquid nitrogen for long-term preservation until RNA extraction.

The OS-RC-2 and 786-O cells were seeded at six-well plates and then transfected at 24 h with specific siRNA (100 NM) or control siRNA (100 NM) using X-tremeGene according to the manufacturer's protocol (Roche). We used the following siRNA sequences: siRNA for Hsa_circ_0001451, sense: 5' CAACAAAAGAUUACUUCCUTT-3'; antisense: 5'AGGAAGUAAUCUUUUGUUGTT-3'.

Cell proliferation was assayed using the MTT assay. The transfected cells were plated in 96-well plates (5000cells/well). Cell proliferation was detected every 24 h according to the manufacturer's protocol. Briefly, 20 µl of MTT solution was added to each well and incubated for 4 h at 37 °C. The solution was then discard and add 150 µl of DMSO, after shaking 10 min at room temperature, the solution measured spectro photometrically at 450 nm.

Total RNA was extracted from the ccRCC tissues and cell lines, using the TRIzol reagent (Ambion, life technologies, USA) according to the manufacturer's instruction. Total RNA was reverse transcribed into cDNA using the First Strand cDNA Synthesis Kit for detection of Hsa_circ_0001451 mRNA. The relative expression of Hsa_circ_0001451 mRNA was detected using FastStart Universal SYBR Green Master(ROX) and normalized to GAPDH. The primer sequences were as follows: 5'-CCAGTAGTATTGTGGACCTGCCC-3' (sense) and 5'-CCCTCTGACCCAGTAACTCCACT-3' (antisense) for Hsa_circ_0001451; 5'-CACCCACTCCTCCACCTTTGA-3' (sense) and 5'-ACCACCCTGTTGCTGTAGCCA-3' (antisense) for GAPDH. The result was analyzed by using -ΔCt method. All the results were expressed as the mean ± SD of three independent experiments.

OS-RC-2 and 786-O cells (0.1 × 103 cells per well) were seeded in a six-well plate and cultured for 10 days after treatment. Colonies were then fixed with 4% paraformaldehyde for 10 min and stained for 5 min with 0.5% crystal violet. Then the number of colonies was counted using ImageJ and images were taken under Olympus microscope (Tokyo, Japan).

After transfection, the apoptosis level of OS-RC-2 and 786-O cell was analyzed using flow cytometry. The cells were collected and washed two times with PBS. Subsequently, the cells were stained by Annexin V-FITC and PI dye for 15 min in dark according to the manufacturer's instructions. The stained cells were analyzed by flow cytometry (BD Biosciences) and were counted using the CellQuest software (BD Biosciences). This experiment was repeated three times.

Total proteins were prepared from OS-RC-2 and 786-O cells using RIPA buffer with proteinase inhibitor. The lysates were incubated on ice for 30 min, then centrifuged at 12,000 rpm for 15 min at 4 °C and protein concentration was measured by BCA kit (Beyotime Biotechnology, Beijing, China). Equal quantities of protein were electrophoresed through a 12.5% sodium dodecyl sulfate/poly-acrylamide gel and transferred to nitrocellulose membranes (Millipore, Billerica, MA). The membranes were blocked and then incubated with Bax, Bcl-2, and β-actin overnight at 4 °C. Subsequently, the membranes were incubated with the anti-mouse or rabbit secondary antibody (Santa Cruz Biotechnology) at room temperature for 1h. The protein bands were visualized using a chemiluminescence reagent (ECL) kit (Beyotime Biotechnology).

To evaluate the functional implication of Hsa_circ_0001451, Circular RNA Interactome was used to predict the target miRNA and starBase was used to predict the miRNA targeted mRNA. The ceRNA network was visualized using Cytoscape software (version 3.4.0) [17]. Functional enrichment analyses for those predict genes were performed using the DAVID Bioinformatics Tool (version 6.7) [18]. GO and KEGG category enrichments were based on the threshold of P-value < 0.05 and enrichment score > 1.0. Significant enrichment results were visualized using R language.

In order to exclude the possible influence of cancer types, we just selected patients diagnosed with clear cell renal cell carcinoma by HE stain. Figure 1A shows the normal kidney tissue (HE, ×50; HE, ×200), and Figure 1B shows the clear cell renal cell carcinoma tissue (HE, ×50; HE, ×200). To make clear about the potential significance of Hsa_circ_0001451 in the progression of ccRCC, RT-qPCR was applied to measure the level of Hsa_circ_0001451 in ccRCC tissues and cells. As shown in Fig 2A, the expression level of Hsa_circ_0001451 was significantly downregulated in ccRCC tissues compared with the matched normal tissues (p < 0.001). These data implied that Hsa_circ_0001451 might be associated with the progression of ccRCC. 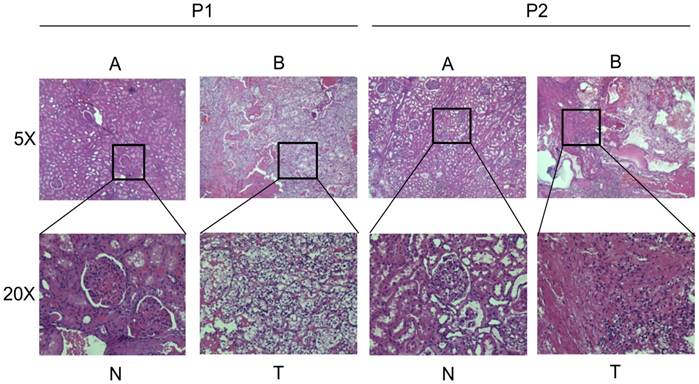 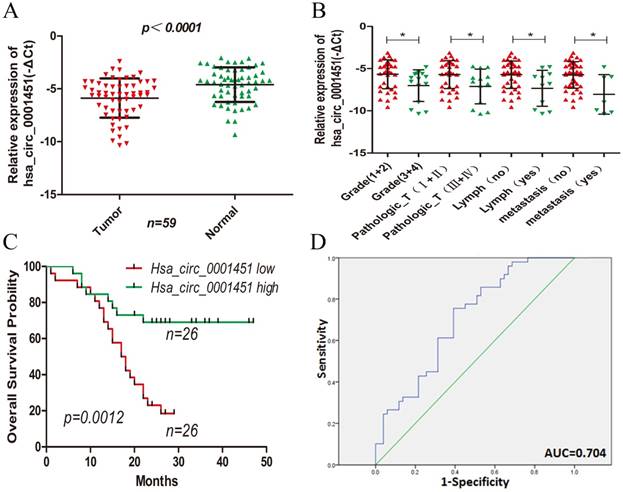 Knockdown of Hsa_circ_0001451 can inhibition of cell apoptosis

Recently, Circular RNAs (circRNAs) are discovered as new endogenous non-coding RNAs [19,20,21]. In structure, compared with the traditional linear RNA (linear RNA, 5' and 3' ends) [22,23], circRNA molecule is a closed ring structure, so that it is not affected by exonuclease, making it very stable and difficult to degrade the expression [24,25]. In function, recent studies have shown that circRNA molecule contain microRNA (miRNA) binding sites to miRNA sponge in the cell function [26,27], thus lead to raise the inhibitory effect of miRNA on its target gene and increase expression of target genes, this mechanism is called competitive endogenous RNA (ceRNA) mechanism [28,29]. By interacting with miRNA, circRNA plays an important regulatory role in disease, especially in cancer [30]. In research of ccRCC, many studies have focused on the epigenetic regulation of its pathogenesis and potential targets for therapy, including microRNAs and long noncoding RNAs (lncRNAs). However, the occurrence of circRNAs in cancer remains largely unknown. This study aims to expound circRNA expression in human kidney tissue. In the process of research, we identified that Hsa_circ_0001451 is aberrantly expressed in ccRCC compared with normal kidney tissue. Through loss of function, we found that Hsa_circ_0001451 is important in the process of the development of clear cell renal cell carcinoma. 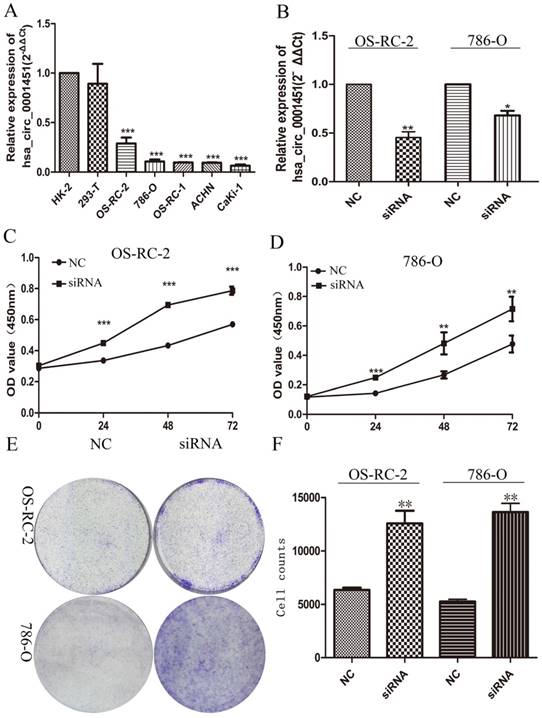 Considering that circRNAs often function as the form of molecular sponges, we predicted target miRNAs of Hsa_circ_0001451 through Circular RNA Interactome (https://circinteractome.nia.nih.gov/), and thereby got about 25 target miRNAs in all. Excluding those non-conservative miRNA and without TCGA data support, we finally determined three miRNAs (Hsa-miR-140-5p, Hsa-miR-197-3p, Hsa-miR-338-3p, Supplementary material, Table S1) for the next study. Then we predicted the target mRNA of the three miRNAs through starBase v2.0 (http://starbase.sysu.edu.cn/) under conditions of medium stringency and at list three prediction software support, and then compared with TCGA, 48 genes were collected (Figure 5A, Supplementary material Table S2). Gene Ontology (GO) enrichment analysis was applied to explore the function of targeted mRNAs identified in this study. Genes were organized into hierarchical categories to uncover gene regulatory networks on the basis of biological process, cellular component and molecular function. Specifically, two-side Fisher's exact test was used to determine the GO category and GO annotation list was greater than expected by chance (P value < 0.05 is recommended as the cut-off). Through GO analysis we found that these genes were associated with cell cycle (ontology: biological process), receptor complex (ontology: cellular component) and nucleotide binding (ontology: molecular function) (Figure 5C, Supplementary material, Table S3). Through the Kyoto Encyclopedia of Genes and Genomes (KEGG) pathway analysis, we identified that 6 pathways were significantly enriched, including Hsa05200: Pathways in cancer, Hsa05212: Pancreatic cancer, Hsa0210: Colorectal cancer, Hsa04060: Cytokine-cytokine receptor interaction, Hsa04010: MAPK signal pathway, Hsa04350: TGF-beta signaling pathway, but only the enrichments of Hsa05200: Pathways in cancer were significant after FDR correction (Figure 5B, Supplementary material, Table S4).

In conclusion, Hsa_circ_0001451 could be detected as a circRNA in human renal cell carcinoma (RCC) tissues and adjacent tissues. It was found that the expression of Hsa_circ_0001451 was down-regulated in RCC tissues. Furthermore, its expression was associated with differentiation and invasion. These results suggested that Hsa_circ_0001451 might be a new target for treatment and a potential biomarker for RCC, providing a valuable basis for the future treatment of RCC. 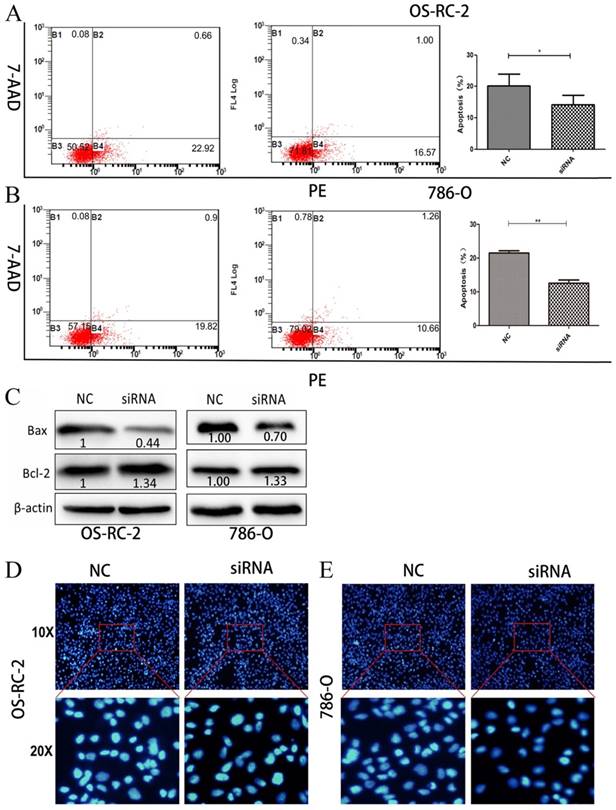 The Biological function prediction of Hsa_circ_0001451 by Bioinformatics. (A) The ceRNA network of the predict miRNA and mRNA map. (B) KEGG pathways significantly associated with the predict protein-coding genes. (C) The functional enrichment map of the GO terms. 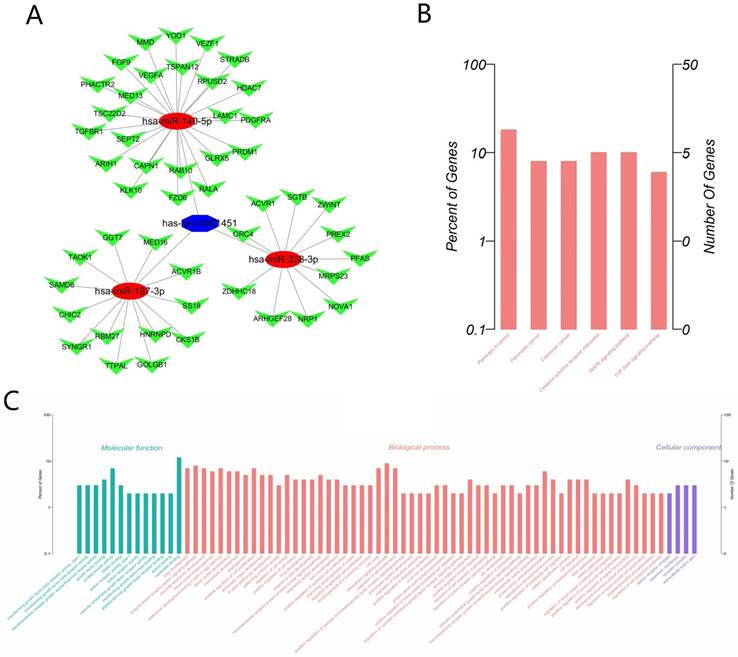 10. Kulcheski FR, Christoff AP, Margis R. Circular rnas are mirna sponges and can be used as a new class of biomarker. Journal of biotechnology. 2016;238:42-51

16. You X, Vlatkovic I, Babic A. et al. Neural circular rnas are derived from synaptic genes and regulated by development and plasticity. Nature Neuroscience. 2015;18:603-610

18. Kulcheski FR, Christoff AP, Margis R. Circular rnas are mirna sponges and can be used as a new class of biomarker. Journal of biotechnology. 2016;238:42