Background and Objectives: Extensive surgery is often required for advanced soft tissue sarcoma (STS) of the limb. In the 1980s, a new approach was developed: isolated limb perfusion (ILP). This study aimed to assess incidence and impact on patient survival based on lymph node metastasis with systematic radical lymphadenectomy during ILP.

Methods: Retrospective study of 57 consecutive patients treated by ILP for limb STS with simultaneous radical lymph node dissection in our tertiary referral center between 1992 and 2015.

Conclusions: Lymph node metastases of STS patients selected for ILP seemed to have a negative impact on both overall and disease-free survival. Radical lymph node dissection should be included in ILP procedure.

Soft tissue sarcomas (STS) are tumours arising from connective tissues, with an incidence of about 5 per 100'000 [1]. Their prognostic is poor, with an overall 50% 5-year survival [2, 3]. Previously, limb STS were treated by amputation until 1982 when a randomised controlled trial that showed no benefit regarding overall survival (OS) when amputation was compared to limb-sparing resection plus adjuvant radiation therapy [4]. The Isolated Limb Perfusion technique (ILP) was first described in 1958 [5]. The technique has been increasingly used since 1992, when a 90 % remission rate for STS treated by a combination of chemotherapy and Tumour Necrosis Factor alpha (TNFα) has been demonstrated [6]. More recently, a review has shown that ILP was an acceptable modality for neoadjuvant treatment of limb STS initially regarded as unresectable [7]. Three decades ago, former studies have retained that there was no indication for systematic radical lymph node dissection even in case of locally advanced disease [8-10]. Despite an increasing interest for radical lymph node dissection as part of treatment for sarcomas, there is currently no study on a standardized population in which radical lymph node dissection was performed systematically.

The study aim was to assess incidence and impact on patient survival of lymph node metastases in limb STS during ILP with systematic radical lymphadenectomy.

Retrospective study including all consecutive patients treated by ILP for limb STS with systematic radical lymph node dissection in our tertiary referral centre between 1992 and 2015. Distant metastasis at diagnosis was not an exclusion criterion. Extracted data from medical files included demographics, surgical reports, radiological findings, pathological reports and follow-up. Some patients received neoadjuvant chemotherapy and/or radiotherapy according to local protocols, while others benefited from primary ILP.

The details of surgical technique have been widely published [6, 11-13]. In brief, the external iliac, the femoral or axillary artery and vein respectively of the diseased limbs are clamped, cannulated and connected to an extracorporeal circuit. In our centre, a radical ilio-inguinal or axillary lymph nodes dissection was systematically performed during vascular dissection to optimize vascular access. To minimize the risk of chemotherapy leakage, the collateral vessels were ligated and a tourniquet applied at the root of the limb. The limb was heated and maintained at a temperature between 38º and 40º Celsius. Leaks were assessed with human albumin radiolabelled by Tc99m and a gamma camera placed in precordial position [14]. Once rheological parameters were adjusted and stable, a single dose of Melphalan (Alkeran® - Pro Concepta Zug AG Switzerland) of 13 mg/l for upper limb and 10 mg/l for lower limb was perfused. At the same time, from 1 to 4 mg of recombinant Tumour Necrosis Factor alpha (Beromun® Boehringer-Ingelheim GmbH Ingelheim Germany) was added [15]. After 60 minutes of perfusion, the limb was rinsed with up to 4 litres of saline solution then the systemic circulation restored.

Quantitative variables were presented as mean (standard deviation) and compared with Mann-Whitney U test. Qualitative variables were presented as frequencies (percentage) and compared with Pearson's chi-square or Fisher's exact test as appropriate. The OS was calculated from the date of ILP until patient's death or last follow-up. The disease-free survival was calculated from ILP until local recurrence or metastases documented by MRI or CT-scan (regular follow-up every 3 months with clinical work up and imaging). Patients with initial distant metastases were excluded from the disease-free survival analysis. The survival curves were drawn according to Kaplan-Meier's method with a Log Rank test (Mantel-Cox) to compare groups. A p value ≤0.05 was considered statistically significant. All statistical analyses were performed using SPSS 23.0 software (SPSS Inc., Chicago, IL).

The study was conducted according to the Declaration of Helsinki principles of good clinical practice and approved by the Local Ethics' Committee (Protocol number 392/11).

Fifty-seven patients had ILP with radical lymph node dissection for limb STS. Four patients had a second ILP and only the first intervention was considered. Median age was 62 years (range 19-87, SD 17.3) and 30 patients were male (53%). Seven patients had upper limb (12%) and 50 lower limb (88%) STS. Only 4 patients had synchronous distant metastases (3 with lung and 1 with liver metastases). The various histological types of sarcomas are described according to lymph node involvement in Table 1.

This present study is one of the few that adopted systematic lymph node resection during ILP. Lymph node involvement was found in 23% of patients, which is slightly higher than what was usually published: nodal metastasis rate in the literature varies between 1,3 % and 24,7 % according to studied populations and histological subtypes [9, 10, 18-21]. However, a recently published retrospective study of patients with STS showed that nodal metastasis rates for STS histologic subtypes were higher than previously reported. This discrepancy could be explained by the absence of standardized lymph node evaluation among patients who underwent surgery for STS. According to other studies, RLND was performed only when lymph drainage area was included in resection's margins [9, 21]. Moreover, other authors considered RLND only in patients with preoperative evidence of lymph nodes metastases [18]. 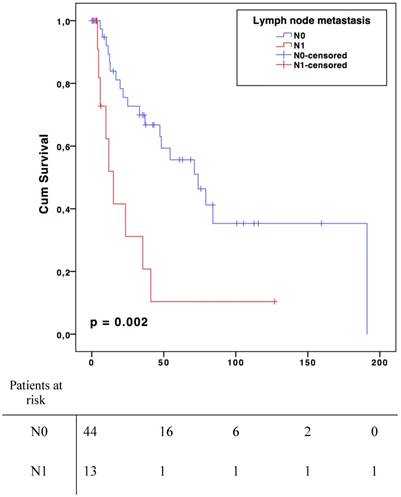 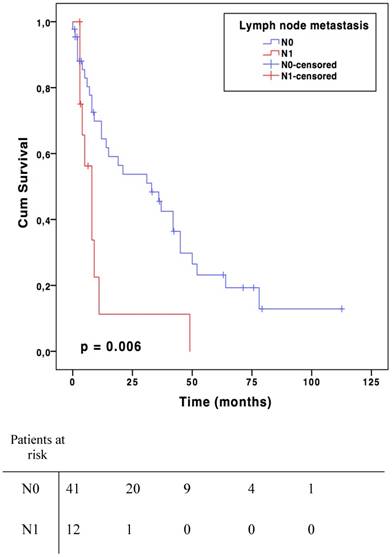 In the present study, lymph node metastases of STS seemed to have a negative impact on both OS and disease-free survival. There was a significant decline of 59-months in overall survival for patients with lymph node involvement. There was also a 37-month difference in disease-free survival. Lymph node involvement appeared to be a factor that clinically reflects the biological aggressiveness of the tumour [18, 21]. It is interesting to note that despite the negative impact of lymph node involvement, the American Joint Committee on Cancer (AJCC) revised its impact on survival. Indeed, in the two last cancer staging manual editions (2010 and 2016) N1 sarcomas were classified as stage III and no longer as stage IV compared to the 2002 version [22]. Stage IV now includes only distant metastatic patients. Lymph node involvement alone is not as aggravating as distant metastases in term of prognosis [21]. The OS benefit offered when the tumour did not reached the lymph nodes in addition together with potentially curative aspect of RLND are major arguments in favour of systematic lymph node dissection during ILP [23]. Moreover, the benefits of this treatment appear to be higher than its potential morbidities (lymphedema, lymphocele, infection and hematoma) [24]. The results from the present study suggest that lymph node dissection should be done systematically at least when an ILP procedure is performed. However, this cannot be claimed for sarcomas in general.

Given the potential benefit of recognizing and removing occult lymph node involvement, some centres proposed to search sentinel node in patients with STS. Recently, a prospective study demonstrated the safety and accuracy of sentinel lymph node biopsy compared to PET-CT to identify therapy-changing nodal disease [25]. However, a meta-analysis recommended sentinel lymph node biopsy prior to radical lymphadenectomy only in sarcoma subtypes with a high risk of lymph node involvement [20]. A retrospective study of an American National Cancer Data Base identified that nodal metastasis rates were highest among patients with rhabdomyosarcoma (32.1%), angiosarcoma (24.1%), clear cell sarcoma (27.7%), and epithelioid sarcoma (31.8%), which is similar to this series as well as another retrospective study [9, 26]. From the anatomical point of view, it has been shown that proximal-type sarcomas have significantly more aggressive clinicopathological features, particularly lymph node metastasis [27]. Regarding tumour grade, high grade sarcomas tend to have lymph node metastases (69%), as previously reported by some authors in retrospective studies [26, 28]. The fact that some STS subtypes are at high risk for nodal involvement should be included in treatment planning. For sarcomas with potentially high lymph node involvement risk, an active detection of lymph node metastases may be evaluated preoperatively (sentinel lymph node biopsy, MRI/CT or PET-CT) [29]. Unfortunately, given the small number of patients in the present series, conclusions and recommendations cannot be drawn for "high-risk" histologies. In the absence of clear recommendations, systematic lymph node dissection during ILP is performed in our academic center. However, according to results of this series and other retrospective studies, it could be considered to perform a RLND for high risk sarcomas (rhabdomyosarcoma, angiosarcoma, clear cell sarcoma, epithelioid sarcoma, synovial sarcoma) and not only during ILP procedures [26, 29].

Conventional imaging modalities (CT-scan and MRI) show a poor sensitivity (small nodal metastases) and specificity (inflammation) for the detection of lymph node metastases. On contrary, 18F-FDG-PET has proven to be a promising imaging modality for detecting primary tumours, lymph node metastases and bone involvement of sarcomas, with better sensitivity than conventional methods including ultrasound and bone scintigraphy [30]. Another previously published study estimated a positive predictive value for lymph node metastasis of 27% [31]. In addition, 18F-FDG-PET can also be used in the evaluation and monitoring of tumour response to therapy. Nevertheless, a discrepancy in 42.9% of cases between the pathological evaluation and that obtained by PET has been described [32].

The main limitation of the present study is its retrospective nature and a relatively small number of patients that prevented multivariate analysis. Furthermore, a wide range of histological subtypes was included. On the other hand, sarcoma is an orphan disease among adult and paediatric populations. Currently, the lack of clear recommendations regarding lymphadenectomy in STS probably leads to an underestimation of lymph node metastases rate and its impact on patient's mortality. Moreover, the same limit applies to neoadjuvant treatments, because there is currently no clear accepted protocol. More research is needed to make evidence-based recommendations in favour of systematic radical lymph node dissection as part of the surgical treatment. The definitive role of RLND in ILP's for limb sarcoma patients' needs more studies.

In conclusion, lymph node metastases of soft tissue sarcoma patients selected for regional therapy (ILP) seemed to have a negative impact on both overall and disease-free survival. Systematic radical lymph node dissection should be included in ILP procedures to have more precise diagnosis with possible positive impact on outcome.

This paper was presented in parts as a poster to the Annual Meeting of the Swiss Society of Visceral Surgery (SSCV), September 2017, Lausanne, Switzerland.