Translocation associated membrane protein 2 (TRAM2) has been characterized as a component of the translocon that is a gated channel at the endoplasmic reticulum (ER) membrane. TRAM2 is expressed in a wide variety of human organs. To date, no information is available regarding TRAM2 function in the genesis of human cancer. The purpose of this study was to investigate the status of the TRAM2 gene in oral squamous cell carcinoma (OSCC) cells and clinical OSCC samples. Using real-time quantitative reverse transcriptase-polymerase chain reaction, Western blotting analysis, and immunohistochemistry, we detected accelerated TRAM2 mRNA and protein expression levels both in OSCC-derived cell lines and primary tumors. Moreover, TRAM2-positive OSCC tissues were correlated closely (P<0.05) with metastasis to regional lymph nodes and vascular invasiveness. Of note, knockdown of TRAM2 inhibited metastatic phenotypes, including siTRAM2 cellular migration, invasiveness, and transendothelial migration activities with a significant (P<0.05) decrease in protein kinase RNA(PKR) - like ER kinase (PERK) and matrix metalloproteinases (MMPs) (MT1-MMP, MMP2, and MMP9). Taken together, our results suggested that TRAM2 might play a pivotal role in OSCC cellular metastasis by controlling major MMPs. This molecule might be a putative therapeutic target for OSCC.

Translocation associated membrane protein 2 (TRAM2) is a component of the translocon, which not only transports proteins but also is a channel at the endoplasmic reticulum (ER) [1-8]. Through the translocon, the proteins synthesized by ribosome are transported into the ER. The folded proteins in the ER then are secreted to the Golgi apparatus. In addition, the C-terminal domain of TRAM2 interacts with the main calcium pump of the ER to regulate the calcium concentration in the ER [9]. The translocon also is an ER calcium leak channel that maintains calcium homeostasis [3-5].

TRAM2 expression is regulated by the runt-related transcription factor 2 gene (RUNX2) and participates in a RUNX2-associated osteogenic reaction [10]. TRAM2 is expressed ubiquitously in several organs, such as the heart, liver, and kidney [11]. However, the expression status and function of TRAM2 in cancers, especially oral squamous cell carcinoma (OSCC), have not been fully characterized.

In the current study, we report the status of TRAM2 expression in OSCC cells and 106 clinical samples. We also describe the detailed mechanism of tumoral metastasis using TRAM2 knockdown models in vitro.

The ethics committee of Chiba University approved the study protocol (approval number, 680), which was conducted according to the tenets of the Declaration of Helsinki. All patients and their families provided written informed consent before inclusion in the study.

One hundred six clinical OSCC samples were obtained at Chiba University Hospital. All tissue samples were fixed in 20% formalin and embedded in wax. Four-micron sections were prepared for immunohistochemistry (IHC) analysis.

IHC was performed as described previously to evaluate the intensity of the TRAM2 immunoreaction [16-19]. IHC scores of OSCC and normal tissues were calculated using a semi-quantitative scoring system [20-25] ranging from 0 to 3, in which 0 indicates absent, 1 weak or focal, 2 moderate, and 3 strong immunoreactivity. The standard deviation score of +3 for normal tissue was determined as the cutoff point for the TRAM2 IHC scores. The IHC scores from the 106 patients were classified as TRAM2-positive and -negative.

To examine the effectiveness of TRAM2 knockdown on cellular growth, we conducted a cellular proliferation assay in which the SiTRAM2 and siControl cells were seeded in 60-mm dishes at a density of 1 × 104 viable cells/dish. The cells were counted using the LunaTM Automated Cell Counter (Logos Biosystems, Annandale, VA, USA) every 24 h from 24 to 120 h.

To examine the effectiveness of TRAM2 knockdown on cellular migration, we conducted the cellular migration assay. The siTRAM2 and siControl cells were seeded on 6-well plates and cultured in DMEM containing 10% FBS until a confluent monolayer formed. A wound was created using a micropipette tip in the middle of each well, and the cells then were cultured in serum-free medium. The wounded area was visualized at 12 and 24 h and measured using the Lenaraf220b free software (available at http://www.vector.co.jp/soft/dl/win95/art/se312811.html).

To examine the effectiveness of TRAM2 knockdown on cellular invasion, we conducted a cellular invasion assay in which 2.0×105 cells of siTRAM2 and siControl cells were seeded on 6-well plates with an 8-μm pore size cell culture insert (Corning, Corning, NY, USA). One milliliter of serum-free DMEM and 2 ml of DMEM containing 10% FBS were added in the upper side and lower side of the insert respectively. After 48 h, the insert was washed with phosphate buffered saline, and the cells on the upper side were removed with cotton swabs. Cells adhering to the lower surface of the insert membrane were fixed with methanol and stained with crystal violet. The numbers of stained invaded cells were counted in five random fields using a light microscope at ×100 magnification.

To examine the effectiveness of TRAM2 knockdown on transendothelial migration, we conducted a transendothelial migration assay using a CytoSelectTM tumor transendothelial migration assay kit (Cell Biolabs, Inc., San Diego, CA, USA) according to the manufacturer's instructions. Briefly, HUVEC cells (5.0×104) diluted in 300 μl of culture medium were seeded on 24-well plates with an 8-μm pore size cell culture insert (Corning), and 500 μl of culture medium was added to the lower side of the insert. The cells were incubated 72 h until a monolayer formed. The siTRAM2 and siControl cells (1.0×106 cells) were diluted in 1 ml of serum-free medium; 2 μl of CytoTrackerTM solution (Cell Biolabs, Inc.) was added and incubated for 1 h. Suspensions of siTRAM2 and siControl cells were seeded on 24-well plates with an 8-μm pore size cell culture insert above the HUVEC monolayer. After a 24 h incubation, the non-migratory cells were removed with cotton swabs. In contrast, the migratory cells were resolved in a cell lysis buffer (Cell Biolabs, Inc.) and incubated for 5 min at room temperature with shaking. The cell lysate (100 μl) was transferred to 96-well plates and measured using the microplate reader TECAN Infinite 200 PRO (Tecan, Männedorf, Switzerland) at 480 nm / 520 nm.

To examine the secreted MMPs from siTRAM2, we conducted gelatin zymography assay using a gelatin-zymography kit (Primary Cell, Sapporo, Japan) according to the manufacturer's instructions. Briefly, after culturing the siTRAM2 and siControl cells in the serum-free DMEM for 48 h, the cell culture medium were concentrated using Centrifugal Filter Units (Merck KGaA, Darmstadt, Germany). The condition medium were mixed with an SDS sample buffer and separated on gelatin gels by electrophoresis. After washing, the gels were and incubated for 48 h at 37℃ in the enzymatic reaction buffer and stained with coomassie brilliant blue. The gels were destained in methanol/acetic solution.

A semi-quantitative IHC scoring system was used to evaluate the intensity of the TRAM2 immunoreactivity. Fig. 1C and D show representative IHC data of TRAM2 in the normal tissue and primary OSCC tissue. TRAM2 expression in the cytosol of the primary OSCC tissues was higher than that in normal tissues (Fig. 1C, D). The TRAM2 IHC scores of the primary normal oral tissues and OSCC tissues ranged from 1.6 to 76.8 (median, 37.55) and 43.7 to 180.1 (median, 108.95), respectively (Fig. 1E). The IHC scores in the primary OSCC tissues were significantly higher than in the normal oral tissues. We classified that IHC scores over 91.5 as TRAM2-positive. In the clinical classifications, TRAM2-positive OSCCs were associated significantly (P<0.05) with lymph node metastasis, stage, and vascular invasion (Table 1).

Correlation between TRAM2 expression and clinical classification in OSCCs

To investigate the function of TRAM2 in OSCC-derived cells, siTRAM2 or siControl was transfected into SAS and HSC4 cells. qRT-PCR and Western blotting analysis evaluated the efficacy of the TRAM2 siRNA transfection. TRAM2 mRNA expression decreased markedly (P<0.05) in the siTRAM2 cells (Fig. 2A). The expression level of TRAM2 protein in the siTRAM2 cells also was lower than in the siControl cells (Fig. 2B). 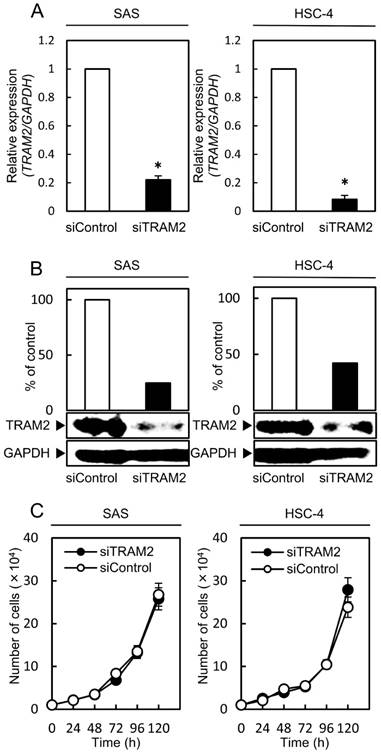 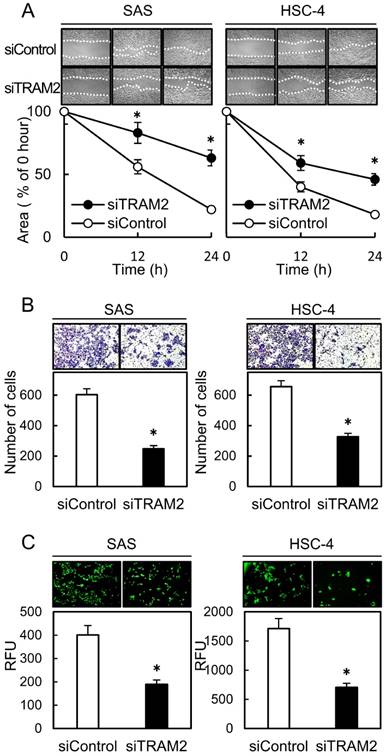 PERK is a marker of ER stress which activates some transcription factors. We investigated the expression of PERK by Western blotting analysis. The expressions of PERK in the siTRAM2 cells were significantly lower than those in the siControl cells (Fig. 4A).

The MMP family is involved in breakdown of the extracellular matrix; thus, MMP family overexpression is related to cellular invasion by cancer cells [26-30]. We investigated the expressions of several types of MMPs (MT1-MMP, MMP2, and MMP9) by Western blotting analyses. The expressions of MTI-MMP, MMP2, and MMP9 in the siTRAM2 cells were significantly lower than those in the siControl cells (Fig. 4B). Furthermore, we investigated the secretion levels of MMPs by gelatin zymography assay. Secretion of proMMP-9, MMP-9, proMMP-2, and MMP-2 of the siTRAM2 cells was decreased compared with siControl cells (Fig. 4C, D).

The current study found for the first time that TRAM2 was up-regulated significantly in OSCC-derived cell lines and primary OSCCs compared with the normal counterparts. Cellular migration, cellular invasion, and expression of the MMP family (MT1-MMP, MMP2, and MMP9) were inhibited in the TRAM2 knockdown cells. Furthermore, highly expressed TRAM2 OSCCs were correlated significantly (P<0.05) with metastasis to the regional lymph nodes and vascular invasion in the tumoral tissues examined (Table 1).

MT1-MMP, MMP2, and MMP9 are believed to promote tumoral metastasis and invasiveness of the cancer cells [28,35,36]. Several studies have reported that MTI-MMP activates MMP2 and MMP9, suggesting that cancer cells with high expressions of MMP2 and MMP9 are likely to metastasize to other organs. The current result, i.e., significant overexpression of MMPs in OSCC cell lines, confirmed a possible role of these MMPs in the accelerated metastasis of OSCCs.

In summary, TRAM2 expression is increased significantly in OSCC and plays a pivotal role in OSCC cellular metastasis by controlling major MMPs. This molecule might be a putative therapeutic target for OSCC.

We thank Lynda C. Charters for editing this manuscript. The authors received no financial support.