Objectives: The result of the relationship between the MUC1 rs4072037 polymorphism and cancer risk is controversial, we take this meta-analysis to investigate a more precise result.

Methods: Electronic database Pubmed, Web of science and Cochrane library had been used to search relevant articles concerning the relationship between MUC1 rs4072037 polymorphism and cancer risk. We used odds ratios (ORs) and 95% confidence intervals (CIs) to assess the strength of the gene-disease association. We also conducted subgroup analysis, sensitivity analyses and publication bias in the meta-analysis.

Conclusion: MUC1 rs4072037 polymorphism is associated with decreased cancer risk and can probably be used as a tumor marker, especially for gastric cancer and for Asians.

Cancer is the main disease lead to death in the world. Approximately 14.1 million cancer cases occurred and 8.2 million cancer patients died in 2012[1]. Gastric cancer is the fourth most common cancer worldwide. It is also the second leading cause of cancer death. Every year, there are more than 950000 new gastric cancer patients [2]. Cancer is a complex disease. Endogenous factors (genetic, immune and endocrine disorders) and exogenous factors (unhealthy behaviors and environmental carcinogens) are both contributed to the cause of cancer [3]. However, under similar environmental circumstances, some people have cancers while others not may suggest genetic predisposition is vital in cancer development.

Single nucleotide polymorphisms (SNPs) are signal-base pairs in genomic DNA that vary in at least 1% of the population [4] and account for much of normal human genetic variation [5]. SNPs which have relationship with cancer are involved in lots of cellular pathways related to DNA repair, cell proliferation, apoptosis, chemotherapy targets and immune response [6]. Recently, genome-wide association study (GWAS) was used to identify the potential candidates for SNPs. Abnet et al.conducted a GWAS on Chinese population in 2010 and discovered MUC1 rs4072037 polymorphism was associated with the gastric cancer risk [7]. In 2011, Saeki et al. also found MUC1 rs4072037 polymorphism was associated with gastric cancer by the Japanese GC GWAS [8]. MUC1, or CA15.3, is expressed in epithelial linings in a different of tissues and is strongly expressed in the female genital tract during mammary gland and pregnancy and lactation [9]. Rs4072037, a functional SNP in exon 2 of the MUC1 gene, regulates splicing site selection during the posttranscriptional regulation process [10]. Besides gastric cancer, the MUC1 was also reported have association with colorectal cancer [11], ovarian cancer [12] and breast cancer [13]. But the consequences of these reports were controversial, we conducted this meta-analysis to evaluate a more precise association between the MUC1 rs4072037 polymorphism and cancer risk.

We selected studies according to these criteria: a. concerning the association between MUC1 rs4072037 and cancer risk. b. case-controls and cohort studies. c. identification of cancer was confirmed histologically. d. the number of each MUC1 rs4072037 genotype. e. genotype spreading of control compliance with Hardy-Weinberg equilibrium (HWE). When the same researcher had two or more publications covering the same patient population, the largest number study was included. There are major reasons for excluded the studies: a. case only studies. b. review papers, case report. c. HWE of controls was < 0.05. d. not providing available genotype frequency. e. containing the data which have common characteristics.

According to the Newcastle-Ottawa Scale (NOS), FJX and LLY conducted quality assessment independently. When disagreement appeared, authors discussed to solve it. The score of study lower than 6 was considered as “low quality”, otherwise was “high quality”.

To evaluate the strength of association between MUC1 rs4072037 polymorphism and cancer risk, crude odds ratios (ORs) and 95% confidence intervals (CIs) were used. The Z test was used to identify the statistical significance of pooled ORs. We calculated the pooled odds ratios (ORs) for the allelic model (G allele vs. A allele), heterozygote model (GA vs. AA), homozygote model (GG vs. AA), dominant model (GG+AG vs. AA) and recessive model (GG vs. AA+AG), respectively. To test the heterogeneity among studies, we performed a Cochrane chi-square-bsaed Q-test. In order to evaluate the statistical, I2 tests were used. To evaluate heterogeneity between studies, the I2 index which expresses the percentage of the total variation across studies due to heterogeneity was calculated. I2 values of 25%, 50% and 75% represents the low, median and high heterogeneity respectively. When I2 >50%, the random effects (Dersimonian-Laird method) [14] was implemented to calculate overall OR value. Otherwise, I2 ≤50%, the fixed effects model (Mantel-Haenszel method) [15] was implemented. To search the heterogeneity between studies, subgroup analyses based on civilization, country, type of cancer, genotyping method and sample size were performed. Begg's funnel plot and Egger's linear regression test [16] were used to evaluate publication bias. We conducted sensitivity analyses by removing each single dataset to explore the influence of the single dataset on the pooled ORs. We used Stata software (version 12.0, Stata Corp, College Station, USA) to perform statistical analysis. All P values were two-sides and P ≤0.05 were considered statistically significant.

The process of literature selection is shown in the Figure 1. A total 126 articles identified through database searching. After screening title, abstract or the whole text, 19 studies were evaluated for suitability. Then 2 studies were excepted due to genotype distributions of control inconsistent with HWE[17,18]. Finally, 17 studies (19 datasets) with 12551 cases and 13436 controls were involved in this meta-analysis[8,11-13,19-31]. These studies were all case-control designed. There were 13 gastric cancer studies, 2 colorectal cancer studies, 1 breast cancer study, 1 lung cancer study, 1 ovarian cancer study and 1 esophagus cancer study. There were 13 studies of Asian descendent, 6 studies of Caucasian descendent and 1 study of American descendent. There were 10 studies used the genotyping method of TaqMan, 2 used the MassARRAY, 1 used the PCR-SSPs, 1 used the SNPlex and 1 used the KASP. The other characteristic of the studies were shown in the Table 1. 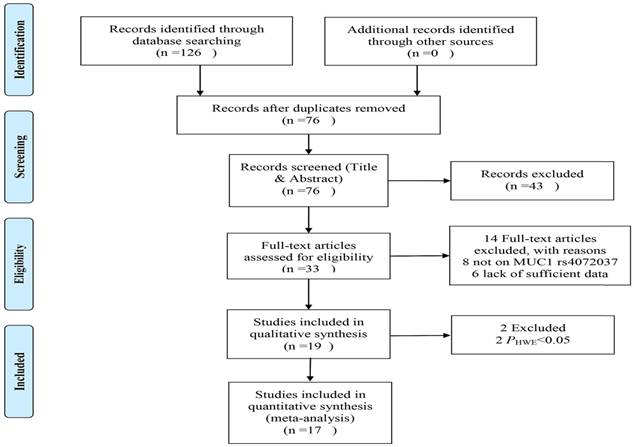 Forest plot of cancer risk associated with MUC1 rs4072037 for allelic genetic model (G vs. A). 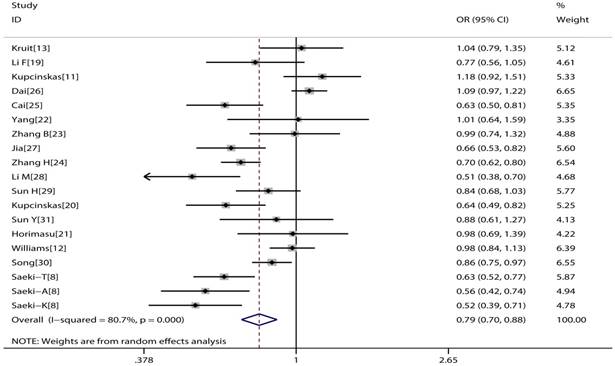 To reflect the effect of single study on the pooled ORs, we conducted sensitivity analysis by excising each study. Because the corresponding pooled ORs did not materially altered, the meta results were statistically robust (Figure 6). 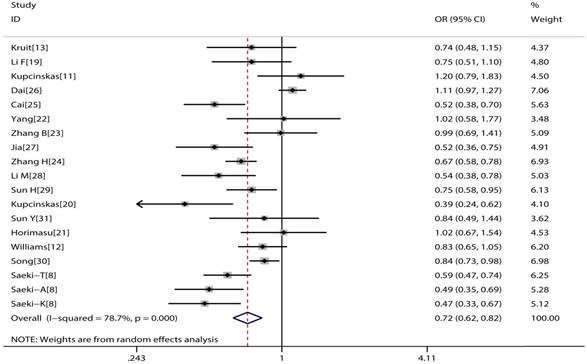 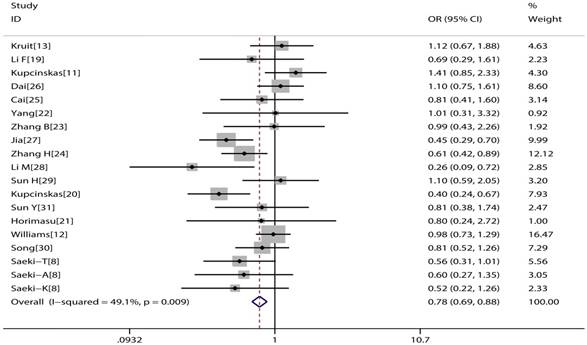 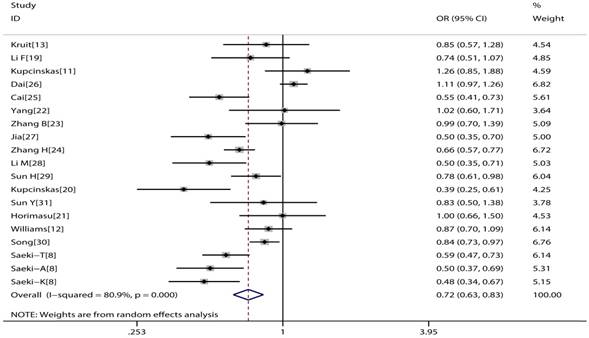 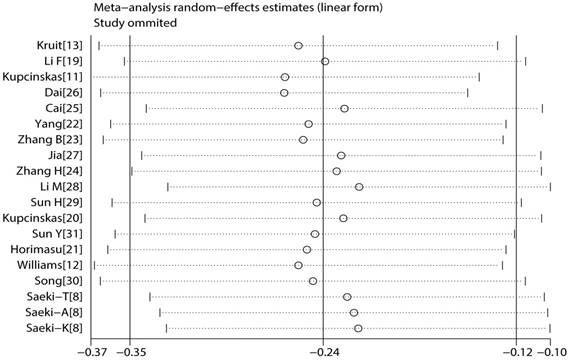 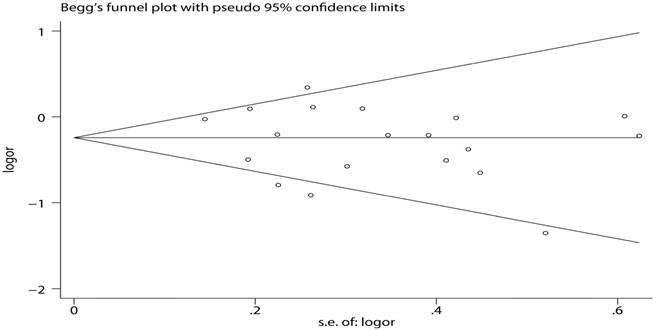 The main result of removing Song et al and Zhang B et al.

Meta-analysis is a crucial statistical technique which has more statistical power than a single study. It can quantitatively combine analyses from different studies. Because of the association between cancer risk and MUC1 rs4072037 polymorphism are conflicted, we performed this meta-analysis to solve the problem. In our meta-analysis, we found the G allele locus on rs4072037 was associated with significantly decreased cancer risk. Subgroup analysis by cancer type indicated that G allele was associated with decreased gastric cancer risk, but not colorectal cancer or other cancers (breast cancer, lung cancer, ovarian cancer and esophagus cancer). We performed subgroup analysis by ethnicity and found G allele was associated with decreased cancer risk among Asian but not Caucasian. The consequences was not changed when stratification by country, genotyping methods or sample size. The MUC1 gene is used to encode membrane-bound glycosylated phosphorprotein and it is a member of the mucin family. There were several studies focus on the relationship between MUC1 rs4072037 polymorphism and the risk of cancer. However, Zheng et al. [32] Giraldi et al.[33] and Liu et al. [34] included fewer studies and only focused on the relationship of the gastric cancer and MUC1 rs4072037 polymorphism. Duan et al.[35] covered only 3 types of cancer, including 8 researches on cancer of stomach and one each on breast cancer and colorectal cancer. Comparing with these meta-analyses, our meta-analysis has involved more studies, which 12551 cases and 13436 controls were involved. In addition, the result of Duan et al showed MUC1 rs4072037 polymorphism was associated with decreased cancer risk in recessive model, but the result of our meta-analysis showed they have no association (OR=0.90, 95%CI: 0.81-1.01, P=0.07). In the subgroup analysis, Duan et al found a decreased association between MUC1 rs4072037 polymorphism and cancer risk in allelic model, heterozygote model and dominant model among Caucasian. However, the result of our meta-analysis showed they have no association among Caucasian under all genetic model.

There were still some limits in our meta-analysis. Firstly, publication bias might exist because we just included published studies. Secondly, we knew diet, smoking and other environmental risk might be factors for cancer. However, because of limited information, we cannot explore the associations between these factors and cancers. Last but not least, the heterogeneity of our meta-analysis in some models is high. Though we found the source of heterogeneity, we thought there might be others.

In summary, our meta-analysis found MUC1 rs4072037 polymorphism was associated with lower cancer risk, particularly in gastric cancer and Asians. It might be used as a tumor marker.

5. Hansen TF, Jakobsen A. Clinical implications of genetic variations in the VEGF system in relation to colorectal cancer. PHARMACOGENOMICS. 2011;12(12):1681-1693