Is Ras a potential target in treatment against cutaneous squamous cell carcinoma?

Hyperactive retrovirus-associated DNA sequence (Ras) genes have been found in human cancers and are involved in cancer pathogenesis. Salirasib, one anti-Ras compound, was reported to exhibit antitumoral effects, but its role remains unclear in cutaneous squamous cell carcinoma (cSCC). In our study, salirasib treatment led to deregulation of c-Raf, ERK and Akt signaling, blockage of MTOR signaling, interruption on Beclin 1-related autophagy regulation, activation of apoptosis and down-regulation of some cell cycle regulatory proteins in primary human epidermal keratinocyte (HEK)s, but did not exhibit similar effects in the human cSCC cell line COLO-16. MEK inhibitor U0126 can lead to dephosphorylation of MTOR and Rictor in COLO-16 cells; however, c-Raf was not yet down-regulated after salirasib treatment in the presence of U0126. Furthermore, we verified that the Ras activity could be suppressed by salirasib, and there was no loss-of-function mutation in c-Raf in HEKs and COLO-16 cells. In summary, salirasib does not exhibit antitumoral effects in the cSCC cells in assays in vitro. We speculated that the disability of signaling transmission from Ras to c-Raf in COLO-16 cells might contribute to the ineffective performance of salirasib.

Hyperactive retrovirus-associated DNA sequence (Ras) genes have been found in human cancers and are involved in cancer pathogenesis [1]. The in vitro activity of salirasib (S-trans, transfarnesylthiosalicylic acid, FTS), an anti-Ras compound, was reported in types of human tumour cell lines. Recently, salirasib was evaluated for preclinical, phase I and II trials in the treatment of pancreatic, hepatologic and lung cancers, respectively [2-4]. Although Ras activation was reported to be involved in the development of human cutaneous squamous cell carcinoma (cSCC), the performance of salirasib has not been evaluated [5]. Herein, we reported that salirasib caused a series of events including deregulation of ERK and Akt signalling, blockage of mechanistic target of rapamycin (MTOR) signalling, interruption of Beclin 1-related autophagy regulation, activation of apoptosis and down-regulation of some cell cycle regulatory proteins in primary human epidermal keratinocyte (HEK)s, but did not exhibit similar effects in the human cSCC cell line COLO-16 because of the interruption of signaling transmission from Ras to c-Raf.

cSCC samples were obtained from surgical excision. The samples were used to be assayed after pathology examination. The tissues were obtained under informed consent of patients. This study conformed to principles of ethics and protected the privacy of the patients' personal health information. This study was approved by Ethics Committee (2012-KY/LC-003).

Cell senescence was evaluated using the Senescence β-gal Staining Kit (Beyotime Biotechnology, Haimen, Jiangsu, China) according to the manufacturer's instructions. The senescence-associated β-galactosidase (SA-β-gal)-positive cells were observed and counted under a microscope at a magnification of × 400.

The Ras activity was assessed by the Ras Activation ELISA ASSAY Kit #17-497 (Merck, Darmstadt, Germany) according to the manufacturer's introductions. The spots were visualized by the ChemiDoc™ XRS+ system (Bio-Rad Laboratories, Hercules, CA, USA). The area intensities were quantified using Quantity One software.

Anti-Beclin 1 antibody was added to the cell lysate (1: 50) and rotated gently overnight at 4°C. The mixture was then incubated with SureBeads Protein G (Bio-Rad Laboratories) at 4°C for 4 h. The SureBeads were washed with PBST three times and resuspended in boiling 1 × SDS sample buffer. After centrifugation, the supernatant was analysed by western blot.

The Cell Counting Kit-8 (CCK-8) (Beyotime) was used according to the manufacturer's instructions. Cells were seeded in 96-well plates at a density of 5×103 cells per well. Prior to detection, the CCK-8 reagent was added and incubated for 2 h at 37°C. The optical density was measured at 450 nm.

Refer to the supporting information.

Results were obtained from 3-6 independent experiments for statistical analysis. T tests or ANOVA were performed for data analysis. The analysis results were considered significant if p-values < 0.05. 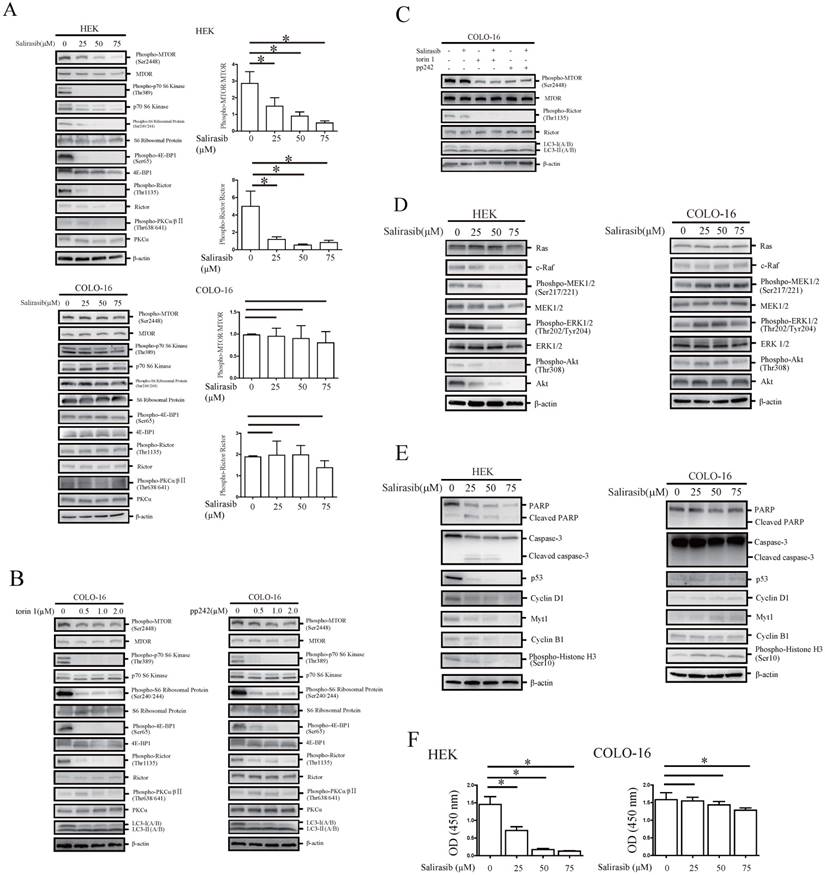 First, we verified that the Ras activity in HEKs and COLO-16 cells could be suppressed by salirasib (Figure 3A). Second, salirasib exited similar effects on Raf/MEK/ERK, Akt and MTORC signalling in HaCaT and A431 cells (Figure 3B-C). Furthermore, we identified p53 exonic mutations in 9 cSCC tissue samples from 10 cases of patients by exome sequencing (Table 1), but pathogenic mutations of Ras and c-Raf were not been found in any samples, suggesting that Ras and c-Raf mutations might be rare in cSCC.

To determine if p53 plays a key role in regulating cellular responses to salirasib treatment, we performed the following investigations. We found that the MEK inhibitor U0126 led to dephosphorylation of MTOR and Rictor, indicating that the ERK pathway normally regulates MTOR signalling in HEKs and COLO-16 cells (Figure 4A-B). In COLO-16 cells with p53 loss-of-function, c-Raf was not yet down-regulated after salirasib treatment in the presence of U0126, suggesting that the target of salirasib is upstream of ERK (Figure 4B). However, in HEKs with p53 silenced, salirasib still led to the down-regulation of c-Raf, MEK, ERK, Akt as well as MTOR and Rictor (Figure 4C). In addition, in HEKs, U0126 decreased p53 expression, and p53 knock-down caused dephosphorylation of MEK and ERK, suggesting a positive feedback loop between p53 and ERK (Figure 4A, C).

In addition to MTOR signalling, the Beclin 1 complex mainly consisted of Beclin 1 and PI3 kinase class III (PI3KC3), which facilitates the autophagy process, and the function is inactivated by Bcl-2 (an apoptotic inhibitor). Salirasib down-regulated the expression of Beclin 1, PI3KC3 and Bcl-2 and decreased the combination between Beclin 1 and PI3KC3 in HEKs but not in COLO-16 cells (Figure 5).

Salirasib was reported to induce autophagy in HeLa, HCT-116 and DLD-1 cell lines [10]. Therefore, we first determined the autophagy level because of the crucial role of autophagy in initiation and development of tumours. The findings demonstrated that salirasib promoted LC3-I to LC3-II conversion and impeded autophagy flux in HEKs but did not affect the autophagy of COLO-16 cells. Autophagy was reported to be involved in cellular senescence [11]. Cell senescence can be reflected through the change of cells stained with SA-β-gal [12]. The result of SA-β-gal assay indicated that salirasib might lead to a more intense biological effect in normal keratinocytes compared with cSCC cells. 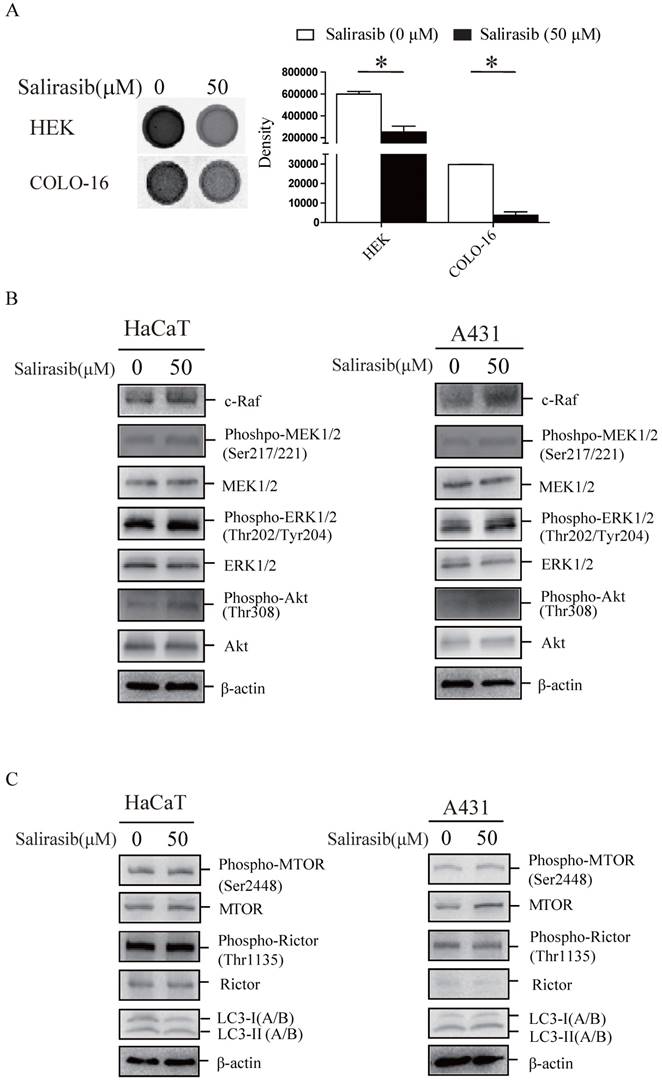 The performance of salirasib on ERK-inhibited or p53-silenced HEKs or COLO-16 cells. (A-B) HEKs or COLO-16 cells were treated with 0 and 5 μM U0126 (A) with or without 50 μM salirasib (B) for 6 h. ERK activities were inhibited by U0126, and phosphorylation and protein levels of MTOR and Rictor were examined for the detection of MTORC activity. Protein levels of p53 (A-B) and c-Raf (B) were also examined. (C) Phosphorylation or protein levels of p53, c-Raf, MEK, ERK, Akt, MTOR, Rictor and LC3 were examined in normal mock (CON), NC, and siP53-transfected (with or without salirasib treatment) HEKs to determine the effect of salirasib under p53 silenced conditions. 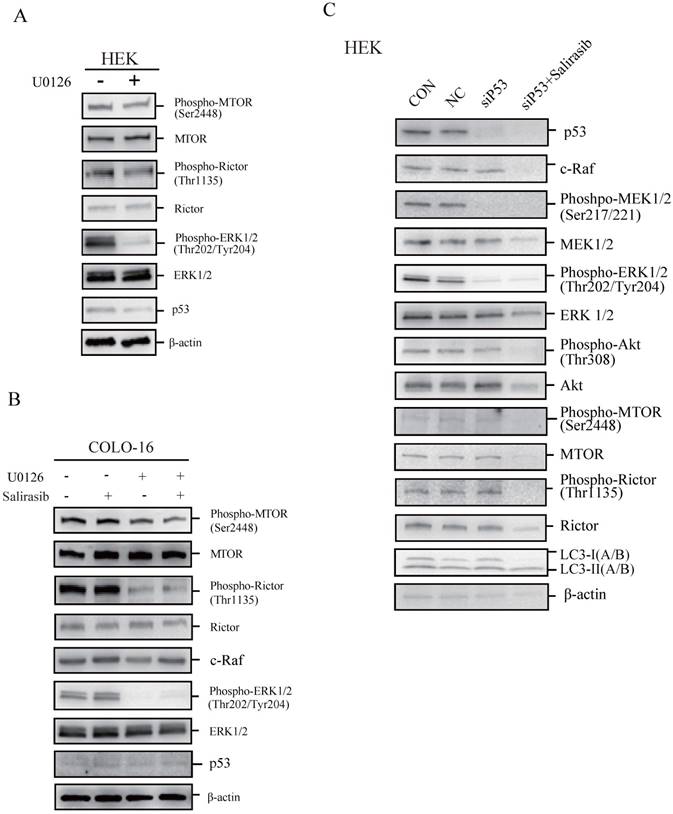 MTOR was reported to be involved in autophagy activation in response to salirasib treatment [13]. Therefore, the activities of MTORC related signalling were evaluated in salirasib-treated cells. The performance of MTOR signalling in salirasib-treated HEKs was consistent with previous reports; however, the MTOR signalling of COLO-16 cells exhibited a novel nonresponse to salirasib. Salirasib is an S-farnesylcysteine analogue and could interfere with Ras membrane association by competing directly with farnesylated Ras [14]. Salirasib suppresses Ras-activated signalling including the Raf/MEK/ERK and Akt pathways, and modulates the cell cycle process, apoptosis and autophagy [15]. While in this study, we found that salirasib did not exhibit similar effects on the two pathways in COLO-16 cells. The effects of salirasib on apoptosis and cell cycle in HEKs also differed from COLO-16 cells. Whether salirasib inhibited the expression of cell cycle regulatory proteins or promoted apoptosis in HEKs via suppressing Raf/MEK/ERK cascades and Akt signalling is unclear and needs further investigation.

Since induced effects of salirasib on autophagy and cell death have been revealed in many tumour cells [10], we speculated that dysfunction of some key proteins led to the insensitivity of COLO-16 cells. We observed that salirasib did not work in reported p53 dysfunction cells including COLO-16, A431 (another epidermal carcinoma cell line) and HaCaT cells. p53 protein was at an extremely low basal level in COLO-16 cells (Figure 2E). Loss-of-function of p53 was reported to induce cell proliferation via activation of Raf/MEK/ERK signalling [16]. The findings indicate that the nonresponse of c-Raf to its upstream signalling component Ras, but not p53 loss-of-function, contributes to the abnormal response to salirasib in COLO-16 cells. We confirmed that there no loss-of-function mutant in c-Raf in four cells lines; therefore, the c-Raf nonresponse is caused by disability of signalling transmission between them.

The findings of Co-IP might explain the results that MTOR inhibition did not induce autophagy, and apoptosis was triggered in salirasib-treated HEKs. Our observations demonstrated that the novel regulation of autophagy by salirasib is caused by its multiple targets on autophagy regulation.

In summary, salirasib does not exhibit antitumoral effects to cSCC cells in assays in vitro. We speculated that the interruption of signaling transmission from Ras to c-Raf in COLO-16 cells might contribute to the ineffective performance of salirasib (Figure 6). Considering the potential value of the Ras/Raf pathway in treatment against cSCC, its mechanism is worth further investigation. The Ras function in cSCC needs to be further clarified before it is considered as a target in pharmaceutical approaches. 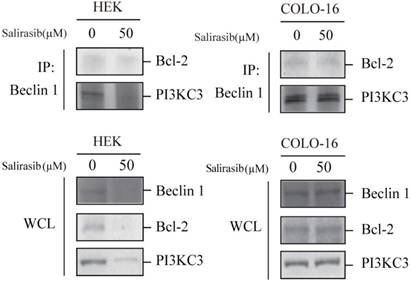 Schematic representations of the results in this study. (HEKs) Salirasib inhibited Ras/Raf/MEK/ERK and p53 signalling. Inhibited ERK might contribute to the down-regulation of cell cycle regulatory proteins. The linkage between p53 and MEK was observed. The inhibition of MTOR signalling in response to its upstream pathway promoted the conversion from LC3-I to LC3-II. However, the autophagy flux was inhibited by salirasib treatment. Decreased expression of the Beclin 1 and PI3KC3 and formation of the Beclin 1-PI3KC3 complex impeded autophagy flux, in agreement with previous findings. Decreased Bcl-2 expression might facilitate apoptosis. (COLO-16 cells) In cells with a p53-mutation, salirasib treatment decreased the Ras activity, but did not lead to the inhibition of Raf/MEK/ERK signalling. Therefore, the inconsistent effects on cell cycle regulatory proteins were observed. MTORC is silent in response to the upstream signalling. MTORC- and Beclin 1-dependent autophagy processes and Bcl-2-related apoptosis were not disturbed under this condition.