Background: Gastric signet ring cell carcinoma (SRCC) is a histologic variant characterized by abundant intracytoplasmic mucin. Although it has been recognized that gastric adenocarcinoma harboring this feature has poorer prognosis, prognostic stratification within gastric SRCCs themselves has not been clearly defined. N-acetylgalactosaminyltransferase14 (GALNT14) genotype has been associated to poorer treatment outcome in mucinous type colorectal cancer. Here we incorporated clinicopathological factors and GALNT14 genotype to stratify prognosis of advanced gastric SRCC.

Gastric cancer is the third leading causes of cancer-related death in the world [1]. The incidence of gastric cancer is decreasing worldwide in recent decades but the incidence of signet ring cell carcinoma (SRCC) increases progressively [2]. It is generally believed that gastric SRCC has a poorer prognosis compared with other types of gastric cancer [3-9]. SRCC is defined as a poorly cohesive carcinoma containing abundant intracellular mucin occupying more than 50% of the tumor volume, with formation of a crescent shaped nucleus in the peripheral area of cancer cells due to compression by mucin [5]. Although SRCC is considered a histological feature for poor prognosis in gastric cancer, the prognostic factors for gastric SRCC itself have not been defined. It is unclear whether the traditional Tumor-Node-Metastasis (TNM) staging system remains valid in stratifying prognosis for gastric SRCC. As the incidence of SRCC is increasing, it is imperative to establish an effective staging system for prognosis prediction within SRCC patients themselves.

N-acetylgalactosaminyltransferase 14 (GALNT14) encodes a Golgi protein, belonging to the polypeptide N-acetylgalactosaminyltransferase protein family. The function of GALNTs is to transfer N-acetyl-D-galactosamine to the serine/threonine residues of large proteins such as mucin. Mutation or knockdown of GALNT genes leads to developmental anomalies in mouse, fruit fly, and human [10]. GALNT14 has also been identified as a neuroblastoma predisposition gene [11]. To date, GALNT14-rs9679162 genotype has been demonstrated to be an effective outcome predictor in multiple gastrointestinal cancers including hepatocellular carcinoma, cholangiocarcinoma, esophageal cancer and colorectal cancer especially with mucinous histology [12-15]. Here, we hypothesized that GALNT14-rs9679162 genotype might also associate with the outcome of gastric SRCC.

Among these patients, 341 underwent radical-intent gastrectomy, while 6 stage IV patients received partial gastrectomy for symptomatic relief such as massive bleeding or obstruction. Subtotal or total gastrectomy was performed according to clinical conditions such as tumor size and location. The cancers were staged according to the seventh edition of the American Joint Committee on Cancer Tumor Node Metastasis classification [16]. All tissue samples were retrieved from Chang Gung Memorial Hospital tissue bank. The median follow-up time was 32.83 months, ranging from 0.4 to 254 months. Patients died after surgery during the same hospitalization periods were excluded for long-term survival analysis. Survival duration was calculated from the time of surgery to event (tumor recurrence or death) or the last follow-up, irrespective of the cause of death.

Associations between the clinicopathological/genetic factors and survivals were performed by use of Cox proportional hazard models. Factors that were considered of potential importance in the univariate analysis (P < 0.15) were included in the multivariate analysis using forward mode stepwise selection. The rule-in level of significance was α < 0.15 and rule-out level of significance was α < 0.10. Statistical analyses were performed with SAS EG software for Windows, version 7.1 (SAS, Inc. USA).

Comparison of survivals between subgroups was performed using Kaplan-Meier analysis and evaluated by log-rank test. P < 0.05 was considered statistical significance.

Baseline demographics and clinicopathological data for all patients included

The baseline demographics and clinicopathological features of patients who received potentially curative gastrectomy were summarized in Supplementary Table 1. They were 57.96 ± 13.79 years of age. No clear gender preference was present. Tumor staging was made according to the results of postoperative pathological examination. American Joint Committee on Cancer (AJCC), 7th edition was applied. Of them, 6 patients were classified as stage IV and only partial gastrectomy for symptomatic relief was performed. More than half (57.11%) of the gastric SRCCs were located in prepyloric area. GALNT14-rs9679162 genotyping was performed using noncancerous gastric tissues. Of these patients, 23.34%, 59.65%, and 17.00% were determined as “TT”, “TG”, and “GG” genotypes, respectively. Overall survival (OS) rate in 1, 2, 5, and 10 years was 77.81%, 66.28%, 48.13%, and 30.26%, respectively.

Clinicopathological factors associated with OS for all patients included

The OS curves for all TNM stages were depicted in Fig. 1A. According to Kaplan-Meier analysis, these patients could only be divided into three prognosis-distinguishable groups (group-1: stage IA; group-2: stage IB/ IIA and group-3 other stages combined) (Fig. 1B). (The P values between group-1 vs 2; group-2 vs 3; and group-1 vs 3: 0.0499; <0.0001; <0.0001). Notably, by use of Kaplan-Meier analysis, the TNM subgroups in group-3 patients (IIB, IIIA, IIIB, IIIC, and IV) could not be clearly separated in term of OS.

Multivariate Cox proportional hazard analysis was performed using stepwise method (see Method). It was found that only tumor size (P = 0.001), N status (P < 0.0001), M status (P = 0.0096), and perineural invasion (P = 0.0339) remained in the equation. Intriguingly, the TNM stage was not included in the final model, suggesting that the TNM staging method was not an optimal prognosis classification system for gastric SRCC.

Clinicopathological factors associated with the OS in group-3 patients 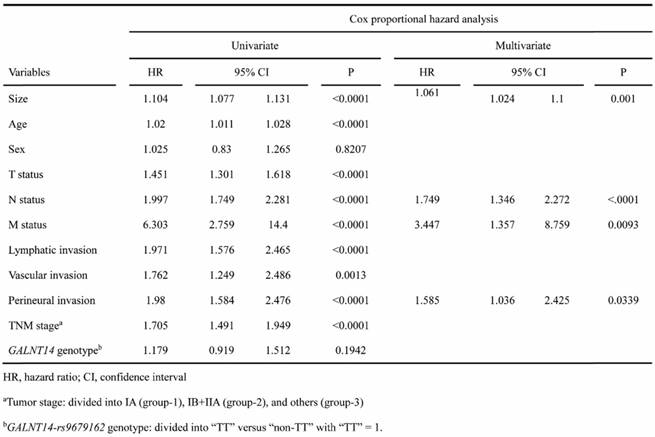 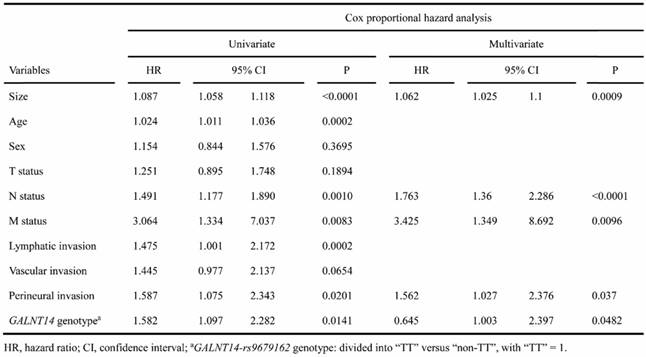 Kaplan-Meier analysis of postoperative OS in patients with gastric SRCC stratified by prognosis-related scores. Patients were divided into 3 subgroups with score = 0/1 (grey-blue), 2/3 (red), and >3 (green). (A) All gastric SRCC patients. (B) Advanced (Group-3) SRCC patients.

The disease-free survival of all patients and groups-3 patients could also be divided into 3 prognostic subgroups using this scoring system (Supplementary Fig. 2).

The prevalence of gastric SRCC is 16.8-35.5 % among gastric cancer patients [19-21] and the incidence is increasing in recent decade [2]. Although it has been established that gastric cancer with pathological characteristics of signet ring cells harbors a significantly poorer outcome when compared with other types of gastric cancer [4, 22, 23], the prognostic factors within gastric SRCCs themselves remain poorly defined. In the present study, it was found that a large proportion of gastric SRCC patients were diagnosed in early stages, with 39.48% in stage I and 14.70% in stage IIA (Supplementary Table 1). These patients still enjoyed favorable postoperative prognosis (Fig. 1). This finding is in consistent with many previous reports, showing that prognosis of early gastric SRCC is equivalent to or better than that of other GC [23-25]. However, there were still nearly half of our gastric SRCC patients (45.82%), who had been diagnosed in a more advanced stage at baseline (group-3 patients). In the present study, it was found that the TNM staging method failed to separate these patients into prognosis-distinguishable groups. As the prevalence of gastric SRCC is increasing, it is mandatory to establish an effective prognosis stratification system for these patients. Additionally, a thorough understanding of gastric SRCC prognostic factors could also optimize treatment strategies in the upcoming era of precision medicine. For example, adjuvant targeted therapies could be given to improve survival in SRCC patients who were predicted to have unfavorable postoperative prognosis. 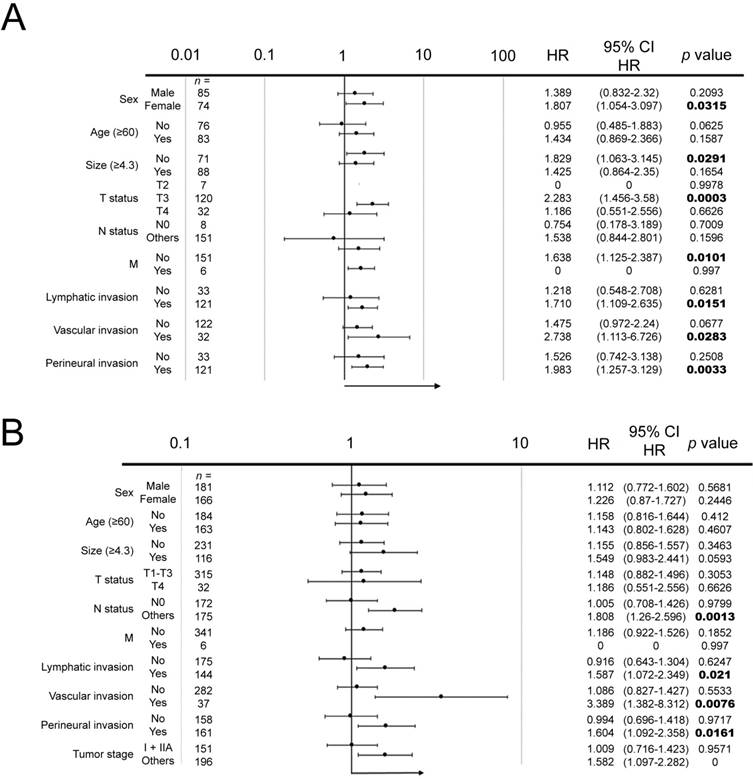 At this time, there is no consistent clinicopathological predictors for advanced gastric SRCC patients, let alone molecular biomarkers. Searching through PubMed, it was found that all previous reports had studied whether the pathological characteristic of “signet ring cell” served as a prognostic factor for unfavorable outcomes among all different types of gastric cancers. Only two reports attempted to stratify prognosis within the disease entity of “gastric SRCC”. One used lymph-node metastasis system to stratify “early gastric SRCC” [26] and the other showed M2 isoform of pyruvate kinase served as a prognosis factor for gastric SRCC [27]. As such, to the best of our knowledge, our study is the first report combining molecular marker and clinical parameters to predict patients' survivals in “advance stage” gastric SRCC. In the present study, we focused on group-3 patients (more advanced stage) for GALNT14 genotype and clinicopathological factors analysis. In clinicopathological factors analysis, under Cox proportional hazard multivariate models, patients with large tumor size, lymph node metastasis, distant metastasis and perineural invasion had poorer OS, which was in consistent with previously studies [22, 28, 29]. Additionally, we discovered that GALNT14-rs9679162”TT” genotype was also associated with poorer OS in group-3 patients.

As reported by previous studies, cancer subtypes containing mucin such as mucinous breast and colon cancers were related to unfavorable disease prognosis [9, 30, 31]. However, only a few relevant studies investigated mucinous gastric cancer including gastric SRCC in biomolecular levels. One study proposed that phosphatidylinositol 3-kinase pathway was involved in SRCC carcinogenesis, which bound to ErbB2/ErbB3 complex to activate downstream pathways including p38 MAP kinase, leading to loss of cell-cell contact by crumbling adherent junctions [32]. ErbB2/ErbB3 complex could be activated by MUC4, which belonged to the family of mucins and was overexpressed together with MUC2 in gastric cancer. In SRCC, excessive accumulation of mucins could play a role in carcinogenesis. However, the mechanisms and pathways regarding mucin accumulation and secretion remained poorly understood [33]. On the other hand, CDH1 germline mutations have been recognized as the major cause of hereditary, early-onset, diffuse type gastric cancer. A higher CDH1 mutation detection rate was reported in patients with family history of gastric SRCC and a guideline had been established to recommend genetic testing. E-cadherin is encoded by the CDH1 gene, which is an adhesion molecule highly implicated in oncogenic processes, such as epithelial-mesenchymal transition.

Despite the aforementioned knowledge for oncogenic mechanisms in gastric SRCC, genetic or molecular factors associated with prognosis of SRCC remained poorly studied. GALNT14 encodes an enzyme responsible for the initial step of O-glycosylation in mucin, a heavily O-glycosylated protein in gastrointestinal tract. In hepatocellular carcinoma, GALNT14-rs9679162 was associated with GALNT14 enzyme expression levels in hepatocytes [34]. It is possible that in gastric SRCC, the GALNT14 genotype is also associated with the GALNT14 enzyme expression levels, thereby affecting the O-glycosylation status on mucins. GALNT14-rs9679162 “TT” genotype was associated with poorer outcome in mucinous type stage III colorectal cancer [11]. We hypothesized that it might also play a prognostic role in gastric SRCC, wherein abundant intracellular mucin was present. Our data have clearly confirmed this point. In fact, in subgroups of gastric SRCC patients carrying more aggressive phenotypes such as perineural invasion, lymphatic invasion, and vascular invasion, GALNT14-rs9679162 “TT” genotype could serve as an effective prognosis predictor.

Accordingly, we formulated a prognostic scoring system, including significant prognostic factors (Fig. 2). The scoring system identified a postoperative subgroup with the worse prognosis (green curve) and a subgroup with the most favorable prognosis (blue curve). The outcome of the latter group was compatible with that of early SRCCs (Supplementary Fig. 1). Such a scoring system could be applied to precision medicine practicing. For example, in the future, SRCCs with the worse prognosis could be further provided with adjuvant therapy, such as TS-1, following surgical resection.

The authors thank all the members of the Cancer Center, Chang Gung Memorial Hospital, for their invaluable help. This study was supported by Chang Gung Medical Research Program (CMRPG3F1602).

All procedures followed were in accordance with the ethical standards of the responsible committee on human experimentation (institutional and national) and with the Helsinki Declaration of 1964 and later versions. The study protocol was approved by the Institutional Review Board of Chang Gung Memorial Hospital (104-8623B). Written informed consent was obtained for all participants, before surgical samples were deposited to Tissue Bank of Chang Gung Memorial Hospital.