Methods: Patients with histologically proven hypopharynx SCC were extracted from the Surveillance, Epidemiology and End Results (SEER) database between 2010 and 2014. We examined the relationship between tumor factors and distant metastases using Chi-squared tests and we evaluated the association between survival and different variables using the methods of Kaplan-Meier. Univariate analysis was performed using the log-rank test. Multivariate analyses with the Cox proportional hazards model were used to test the independent significance of the predictors, and two-tailed p-values less than 0.05 were considered statistically significant.

Results: We finally identified 1780 patients who were diagnosed with hypopharynx SCC and the most frequent site of distant metastases was lung. Some clinical characteristics, including age, gender, race, histological grade, T classification and N classification were independent risk factors. Higher T or N category, posterior wall of hypopharynx cancers and multiple sites of metastases were associated with poorer overall survival. For cancer-specific survival, elderly patients with higher T category, advanced N category, posterior wall of hypopharynx cancers, multiple sites of metastases and no surgery therapies to the primary tumor were associated with worse survival.

Oral carcinomas are the sixth most common cancers in the world, after cancers of the lung, breast, colorectal, prostate and gastric cancers [1]. Squamous cell carcinoma (SCC) of the hypopharynx is less prevalent than at most other major sites of the head and neck, such as the oral cavity, larynx and oropharynx, and accounts for approximately 3% to 5% of all head and neck SCC [2,3]. Hypopharynx SCCs have their own specific and unique characteristics and considerations regarding treatment. Although the incidence of distant metastasis in hypopharynx SCC is low compared to other cancer types, such as breast or lung cancer, distant metastasis is a major determinant of management and prognosis. Treatment algorithms for hypopharynx SCC have been based on a multitude of factors including tumor characteristics (histology, biology and stage) and patient characteristics (co-morbidity and performance status). Despite evolution in management, the overall survival of patients with distant metastases has not improved significantly during the past 20 years [4].

The SEER program is the largest publicly available cancer dataset, which contains data on patient demographics, tumor characteristics, first course of treatment, and follow-up information. However, SEER does not currently include any information on location of metastases in the standard research data until 2010. The criteria defined for inclusion in this study were primary histologically confirmed hypopharynx SCC and diagnosed between 2010 and 2014. We excluded a total of 244 patients mainly because of unknown pathology type of tumor, lack of racial information, unstaged tumors or 'blanks' metastatic site. A total of 1780 hypopharynx SCC patients were included in the final sample for this analysis.

The patients' demographic and tumor characteristics were summarized with descriptive statistics. We examined the relationship between these factors and distant metastases using Chi-squared tests.

Survival was defined as the number of months between the date of diagnosis and the date of death of any causes (OS) or of their cancer (CSS). For analysis of overall survival, the time from diagnosis until the end of the follow-up was used together with the information whether a patient died or not. For cancer-specific survival, CSS was calculated from the date of diagnosis to the date of cancer specific death whereas other deaths unrelated to hypopharynx SCC were censored. The censoring was based on the coding of these endpoints in the SEER database (alive, cancer-associated death, other death). We evaluated the association between survival and different variables using the methods of Kaplan-Meier. Univariate analysis was performed using the log-rank test. Multivariate analyses with the Cox proportional hazards model were used to test the independent significance of the predictors.

Clinical Characteristics of all Patients 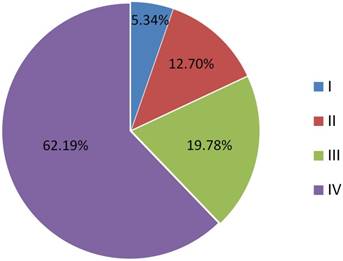 The database only had metastatic information related to liver, lung, bone and brain metastasis. In the patients of all-stage hypopharynx SCC, the most frequent site of synchronous distant metastases at initial diagnosis was lung (n=72), followed by liver (n=19) and bone (n=18). Metastasis to brain (n=6) was the least among the four sites.

As shown in Table 2, histological grade of tumor was found to be independently associated with lung metastases and poorer differentiation was an independent prognostic parameter for higher incidence of lung metastasis (p=0.001). In addition, we found that T classification was also an independent parameter for metastatic diseases. A higher T category was associated with higher incidence of lung, bone and brain metastasis (p=0.004, p<0.001 and p=0.010, respectively). The same results were found in N category in lung and bone metastasis (p<0.001 and p=0.019, respectively).

Demographic and clinical features of patients with and without metastases

Univariate analysis of OS and CSS in hypopharynx SCC patients

The current analysis has pointed out some interesting correlations between some baseline criteria and the patterns of distant metastases. For example, lung metastatic diseases were associated with male gender and maybe the lifestyles (smoking and alcohol drinking) could partly explain the observed sex-based differences. Most patients when diagnosed have advanced-stage disease and 81.97% of the patients have stage III or IV disease at presentation (Figure 1), which were consistent with many other studies [4-6]. Higher T categories are observed in patients presenting with M+ disease as opposed to M0 and advanced regional disease (N3 disease) increased the risk of distant metastases. 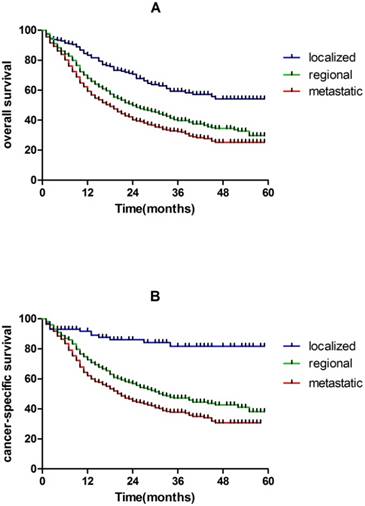 Moreover, in current study, tumor location is another risk factor for distant metastatic diseases. Lesions of the hypopharynx are subdivided into the aryepiglottic fold, pyriform sinus, and posterior hypopharyngeal wall by anatomical location [7,8]. The incidence of postcricoid carcinoma was low (3.5% in our study). Most postcricoid tumors were advanced pyriform fossa tumors. Therefore, postcricoid tumors were amalgamated with two or three wallapex tumors of the pyriform fossa. Pyriform sinus carcinoma was associated with lower incidence of liver metastasis (p=0.041) and patients with lateral wall disease had higher survival than patients with posterior wall cancers (p <0.001).

Impact of prognostic factors for OS and CSS by multivariate analyses.

In our study, number of metastatic sites was an independent prognostic parameter both for OS and CSS. Many studies have indicated that patients with oligometastases may benefit from local aggressive therapy and increase their life expectancy [15]. However, absence of information about performance status of the patients in the current analysis should be taken into account when interpreting these findings as differences in baseline performance may have led to selection bias in the choice of local treatments (i.e. patients with better performance status are being referred to surgery more likely than patients with unfavorable performance status). What's more, there is a selection bias of oligometastatic disease, which indeed surgeons have been operating primaries in patients with low M+ burden, versus extensive metastatic disease, and this bias is hard to filter out. In addition, benefits of surgery of the primary tumor in cases of a metastatic solid tumor have been suggested for a number of solid tumors including metastatic pancreatic adenocarcinoma and neuroendocrine tumors and metastatic hepatocellular carcinoma [15-18]. This strategy is currently being evaluated in a number of ongoing studies for metastatic breast cancer [19,20].

Better understanding of clinical correlates and prognostic value of distant metastases is helpful in the clinical decision-making process. Since lung is the most frequent site of distant metastases, contrast enhancement computed tomography (CT) on chest should be maintained according to NCCN guideline [21]. And for patients with high risk factors of specific site of metastasis, imaging of other sites should be applied. Diagnosis of metastasis is essential not only for staging, but also for further systematic treatment. With the development of medical technology, quantities of therapy methods, including surgery and stereotactic body radiotherapy (SBRT), have been applied to clinical practice for metastases sites and proved to be effective [15].

As far as we know, this is the first SEER analysis assessing clinical correlates and prognostic value of distant metastases in a large cohort of patients with hypopharynx SCC. However, there are still some limitations. Firstly, the details about metastases, such as sizes and exact metastatic lesion quantity in specific organ, were not included. Secondly, it is lack of information about systemic therapy options the patients have received. The use of chemoradiotherapy for the purpose of organ preservation has been increasing [4,22-24], especially in recent years, but SEER does not currently include any information in the standard research data. Thirdly, all information on metastases is from their first diagnosis and lack of following information, including treatment modalities of the patients which may confound the assessment of overall survival analysis. Thus, cancer-specific survival has been evaluated as a primary outcome in this study to avoid the confounding effect of non-cancer deaths.

In the patients of hypopharynx SCC, lung was the most frequent site of distant metastases. Poorer prognosis was associated with elderly patients, higher T category, advanced N category, posterior wall of hypopharynx cancers, no surgery therapies to the primary tumor and more metastatic sites.

We acknowledge the support of the Department of Radiation Oncology, Fudan University Shanghai Cancer Center. The views expressed in this publication are those of the authors.

Yujiao Li, Xiaomin Ou and Chaosu Hu have made substantial contributions to all of the following: (1) the conception and design of the study, or acquisition of data, or analysis and interpretation of data, (2) drafting the article or revising it critically for important intellectual content, (3) final approval of the version to be submitted.