Methods: Data of colorectal cancer cohorts between 2012 and 2013 were acquired from the Health Insurance Review and Assessment Service. All patients underwent surgery due to colorectal cancers. Stage IV patients were excluded due to possible clinical heterogeneity. BMI was classified with the World Health Organization criteria.

Results: A total of 31,756 patients were analyzed. The underweight group had 33% higher risk of stage III disease (p<0.001). The overweight and obese groups had 20% and 19% lower risk of stage III (p<0.001 and p=0.002, respectively). The underweight and obese groups had higher risk of longest hospitalization period quartile (≥19 days), with odds ratio of 2.26 (p<0.001) and 1.33 (p<0.001), respectively. The overweight group had a 22% lower risk of the longest hospitalization period quartile (p=0.002). Females had 12% lower risk of distal cancer than males (p<0.001). There was no significant relationship between cancer stage and gender. The proportions of patients who were <50 years and ≥70 years old were higher in the females, and the proportions of patients in their 50s and 60s were higher in the males.

Conclusions: Cancer stages and hospitalization period varied depending on BMI. Disease location and the age distribution were affected by gender.

This study was performed to demonstrate the clinical significance of body mass index (BMI) and gender using a large nationwide colorectal cancer patients cohort of Korea.

The Korean government has operated the National Health Insurance Service (NHIS) for over 30 years, covering more than 98% of the population [10]. The Korean Health and Insurance Review and Assessment Service (HIRA) has recorded claims and reimbursements made under NHIS and provide information about healthcare services. Clinical data of colorectal cancer cohorts between 2012 and 2013 were acquired from HIRA (http://opendata.hira.or.kr). The cohorts provided data of patients who underwent surgery due to colorectal cancer. The acquired data included age, gender, height, weight, date of surgery, cancer stage, hospitalization period, and insurance codes of disease. Based on the insurance codes provided, the patients included in the cohort were diagnosed with malignant neoplasm of the colon (C18), malignant neoplasm of the rectosigmoid junction (C19), and malignant neoplasm of the rectum (C20).

Because not all colorectal cancer patients in Korea are included in the cohort, we referred to the national cancer incidence rate provided by the Korean Statistical Information Service [11] to determine the proportion of the cohort among the total colorectal cancer cases nationwide.

The World Health Organization (WHO) criteria were used to classify BMI [12]: underweight was defined as BMI less than 18.5; normal weight 18.5-24.9; overweight, 25-29.9; and obese, 30 or above. The cases with insurance code C18 (malignant neoplasm of colon) were classified as proximal cancer, and the cases with C19 (malignant neoplasm of the rectosigmoid junction) or C20 (malignant neoplasm of the rectum) were categorized as distal cancer. Patients with stage IV in the cohorts were excluded from the analysis, because they might have heterogeneous nature such as much poor general condition, and the purpose of surgery might not be curative. If the patient records lack data in any of the variables, including height, weight, cancer stage, and hospitalization period, the records were excluded. Because the duration of the cohorts was as short as two years, and to maximize the statistical predictive power, statistical analysis was done with combined cohort summing cohorts of 2012 and 2013.

National incidence and evaluation of cohorts 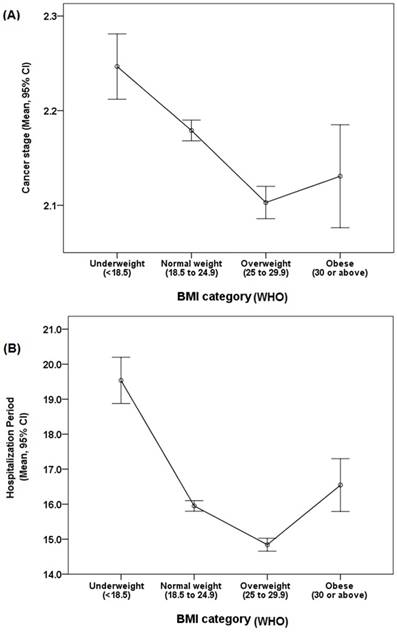 Analysis of Gender and clinical variables

The distribution of patients according to gender and the results of the univariate analysis are described in Table 3. In comparison between genders, there were significant differences according to age group, BMI, and disease location (Ps<0.001). Regarding age groups, the proportions of patients who were <50 years and ≥70 years old were higher in the females, and the proportions of patients in their 50s and 60s were higher in the males (Figure 2). Cancer stage and hospitalization period showed no difference according to gender (p=0.111, 0.720, respectively). In multivariate analysis, the female cohort had more of obese patients (p<0.001; OR 1.49; 95% CI 1.31 - 1.70), and less of distal colorectal cancer patients (p<0.001; OR 0.88; 95% CI 0.84 - 0.92) than the male cohort. The results of multivariate analysis are also described in Table 3.

Incidence distribution according to age groups and gender 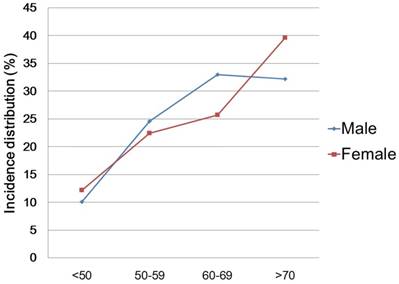 The research results on the relationship between obesity and cancer stage are conflicting. Some researchers suggested that high BMI might be associated with advanced colon cancer [8, 13, 14]. Other investigators have reported no association between obesity and colon cancer stage [15-17], and a recent meta-analysis indicated that BMI is not related to pathologic status of rectal cancer [6]. In our study, the risk of advanced cancer stage in the overweight or obese groups was lower than in the normal weight group. Although further investigation is needed to explain the result, we hypothesize that BMI categorization might be the partial cause of the difference from the previous studies. Most studies have described the distinctive status of diseases in obese populations, but the proportion of obese patients in our study was too small. It is also possible cause that we only did analysis using BMI, and did not perform body composition analysis [18, 19].

Analyses between gender and clinical variables

Conventional wisdom among surgeons is that obese patients have more medical comorbidities, and the risk of adverse surgical outcome is high [20]. A recent meta-analysis supported this theory with the result that obesity was related with increased risk of surgical complications [6]. However, some previous studies reported that obesity might not be a risk factor for increased hospitalization period or postoperative complications [21-23].

Several explanations were suggested for this phenomenon. The underweight group may be composed of more smokers or people who have experienced weight loss due to chronic illness [25, 26]. Recent weight loss >10% or low albumin levels have also been associated with postoperative morbidity and mortality [27-29]. In our study, the underweight group had increased risk of higher cancer stage, which might be associated with postoperative outcome and longer hospitalization period. Our results are consistent with previous studies.

Colorectal cancer is a disease closely associated with gender. In our study, the proportion of female patients was slightly higher in age group under 50 years, male patients were higher in groups of 50s and 60s, and female patients were higher in group over 70 years of age. The number of incidence were higher in the male patients across all age groups. This trend is consistent with the results of two large cohort studies using the United States Surveillance, Epidemiology and End Results (SEER) database [30, 31]. The cumulative protective effect of estrogen for up to 20-25 years after menopause, and reduction of colorectal cancer risk with use of hormone replacement therapy, have been suggested as hypotheses to explain these results [32-34].

Our study showed that female patients were less likely to have distal colon cancer than male patients. This finding is consistent with most of the related reports [8, 35-37]. Differences in lifestyle and eating habits [38-42], and differences in screening rates are possible explanations [30, 43], but further research is needed to find the reason for this result.

Male patients are generally known to have more advanced colorectal cancer [8, 44, 45]. A meta-analysis reported that male patients had more advanced stage of colorectal cancer than females [9]. The etiology for the gender difference is still uncertain, but preventive effect of estrogen and progestins [46, 47], less use of smoking and alcohol [48-50], and genetic difference have been suggested as possible hypotheses [44, 51].

In our study, multivariate analysis showed no significant difference in cancer stages, and proportions according to stages were almost similar between men and women. In a large epidemiologic study using the SEER database from 1975 to 2006, men had significantly higher incidence of colorectal cancer in all stages. However, the differences of incidence between men and women were 18.3%, 12.5% and 7.7%, in localized, regional, and distant stage of cancer, respectively; the differences were decreased as the disease were getting advanced [37]. Considering the results of our study and the SEER database study, further investigation might be needed about the past knowledge that male patients generally have a higher incidence of advanced colorectal cancer.

Several limitations should be taken into consideration to interpret the present study. Our study is mainly observational, and the analysis was performed with narrow range of clinical information. The main limitation of our study is that it is impossible to perform detailed analyses to clearly define the cause of results. Nevertheless, this study is still valuable for showing the clinical significance of BMI and gender in Asian patients with colorectal cancer, who have been less studied and may have different obesity characteristics from the Western population.

As socioeconomic status is known to be closely related to obesity [52], diagnostic chance from cancer screening might be increased in a certain BMI group. In Korea, the national cancer screening program has provided free services for those with bottom 50% income and subsidized 80% of costs for higher income group, from 2006 [53]. Considering a study about relationship between socioeconomic status and obesity of Koreans, dose-response relationship was noted between income and obesity for men but not for women [54]. However, numeral difference of median BMI between lowest and highest income quartile was only 1.4, and median values of BMI in all quartiles were narrowly ranged from 22.5 to 23.9. Although possible bias could not be fully controlled, the likelihood that obesity and related socioeconomic differences affect the screening chance and consequently affected the outcome of this study might be less than moderate.