Methods: Non-experienced first- and second year high school students examined fourteen cases of patients diagnosed with breast cancer. These cases consisted of missed breast cancer lesions on FFDM by a breast radiologist. Sensitivity of assessment of the students on FFDM and CEM was analysed and compared with the initial results of the breast radiologists.

Over the last decades, breast cancer incidence increased from 541,000 in 1975 towards more than 1,6 million in 2012 [1; 2]. Breast cancer death rates have been stable or have even slightly decreased since 1990 in Northern America and higher-resource European countries, because of the improved treatment strategies and early detection by (screening) mammography [2; 3]. In breast cancer imaging mammography continues to play a pivotal role in detecting patients in an early phase of disease, in order to obtain the most beneficial and prognostic outcome.

The mean sensitivity of full-field digital mammography (FFDM) is 80% [4]. Interpretation of FFDM can be especially challenging in more dense breast tissue or if lesions are smaller [5-7]. Sensitivity can even drop to 61% when women have extremely dense breasts [8]. As a result, a sensitivity of 80% is considered acceptable as reading performance among radiologists, but higher accuracy is strongly preferred to further optimize breast cancer detection [9].

Consequently, new techniques were and are developed in order to improve diagnostic performance of FFDM, like the introduction of contrast-enhanced mammography (CEM) [10]. In CEM, an iodine-based contrast agent is intravenously administered prior to image acquisition. A typical CEM exam consists of a low- and high-energy image of both breasts in two different projection views [11]. The low-energy image is comparable to FFDM, whereas the high-energy images are used to generate a recombined image, in which areas of iodine accumulation can be visualized [12; 13]. A meta-analysis of Tagliafico et al. demonstrated that the sensitivity of CEM is superior compared to FFDM, with a pooled sensitivity of 98% compared to previously reported sensitivity of 80% on FFDM [4; 14].

Also, the learning curve of CEM seems to be shorter than FFDM. Prior studies have shown that CEM improves the diagnostic performance of experienced and less experienced readers (i.e. breast radiologists without previous CEM experience and radiology residents) when compared to FFDM [15; 16]. If evaluation of CEM by non-experienced readers (even without any dedicated radiological training) could outperform FFDM assessed by experienced breast radiologists, the importance of CEM as breast imaging tool would be further underlined, especially in potential future settings where automated image-based feature analysis (i.e. radiomics) are involved to improve breast cancer detection rate [17].

Therefore, the current aim of this study was to investigate the diagnostic performance of FFDM and CEM in truly non-experienced readers (i.e. high school students) in a cohort consisting of patients with missed breast cancer lesions according to prior FFDM evaluations by breast radiologists.

The local medical ethical committee of Maastricht UMC+ waived the requirement for obtaining informed consent from included patients and participants. In this study, we used cases from a previously published study by Lalji et al. [16]. In their study, seven dedicated breast radiologists and three radiology residents independently evaluated a cohort of 199 patients, referred from the breast cancer screening programme, who underwent both FFDM and CEM exams.

For the present study, a total of fourteen cases with missed breast cancer lesions were collected from the study of Lalji et al. [16]. All these cases consisted of unifocal breast cancer, but were missed on FFDM by at least one of the (expert) readers from the previous study. The ipsilateral images of both FFDM and CEM with best visualisation of the breast cancer lesion (either cranio-caudal view (CC) or mediolateral oblique view (MLO)) were collected and prepared as online test on commercially available online software system Qualtrics® (Qualtrics, Washington, District of Columbia, USA). A single view image of FFDM was followed by the same view (CC or MLO) on the recombined image of the CEM exam. The online test demonstrated the FFDM images first, followed by the recombined CEM images. A region of interest of the primary tumour on each FFDM and CEM image was drawn in consensus by a radiology resident (T.v.N.) and an expert breast radiologist with eight years of dedicated breast imaging expertise (M.L.) (Figure 1).

The participants in this study consisted of students that were involved in a six-year pre-university education, which is comparable to obtaining a General Certificate of Education A-level in the United Kingdom [18]. All students were in their first or second year of education.

First, a short introduction on breast cancer and CEM was presented. This introduction consisted of a brief overview of pathology, prognosis and treatment options of breast cancer (surgery, systemic therapy and radiotherapy), followed by a description of FFDM and CEM. For the online test, students were instructed to click on the most suspicious breast lesion on FFDM, according to their own interpretation, and subsequently click on the most suspicious (i.e. whitest coloured) breast lesion on the recombined CEM image within the breast.

Students were unaware of any clinical patient information. The online test was constructed to force one click per image before continuing to the next page. Students were unable to review previous pages of the test. Furthermore, students received no feedback on their performance while scoring. All fourteen cases were finished within one session. Total time of the test per student was automatically calculated by the online test.

Figure 2 demonstrates an overview of the student evaluations concerning case number 4. On FFDM, mean sensitivity of the students was 88.8% (81.9 - 93.4%). According to the recombined CEM exams sensitivity decreased to 36.6% (28.5 - 45.4%), most false-negative results were caused by the calcification in the middle of the breast or the nipple. 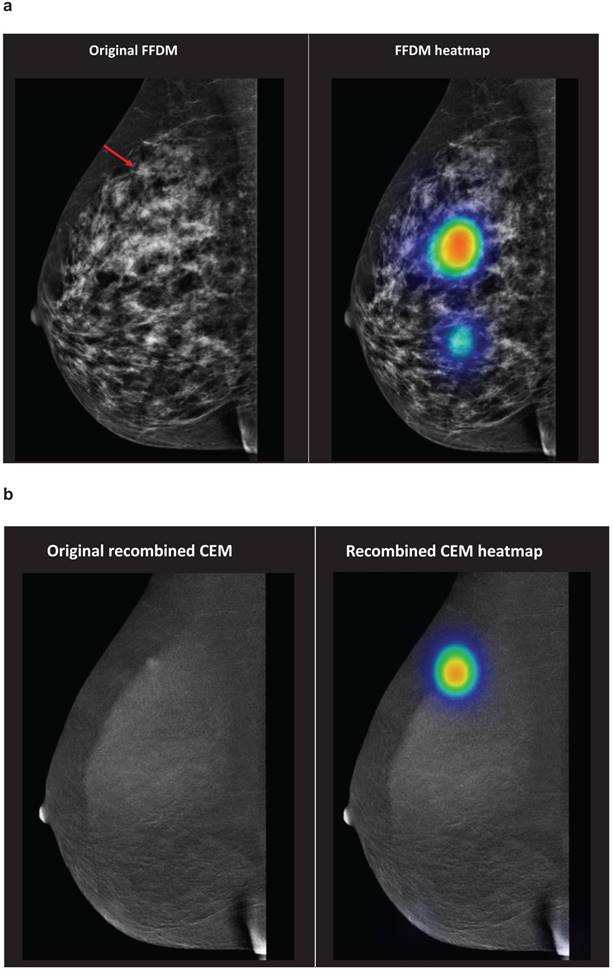 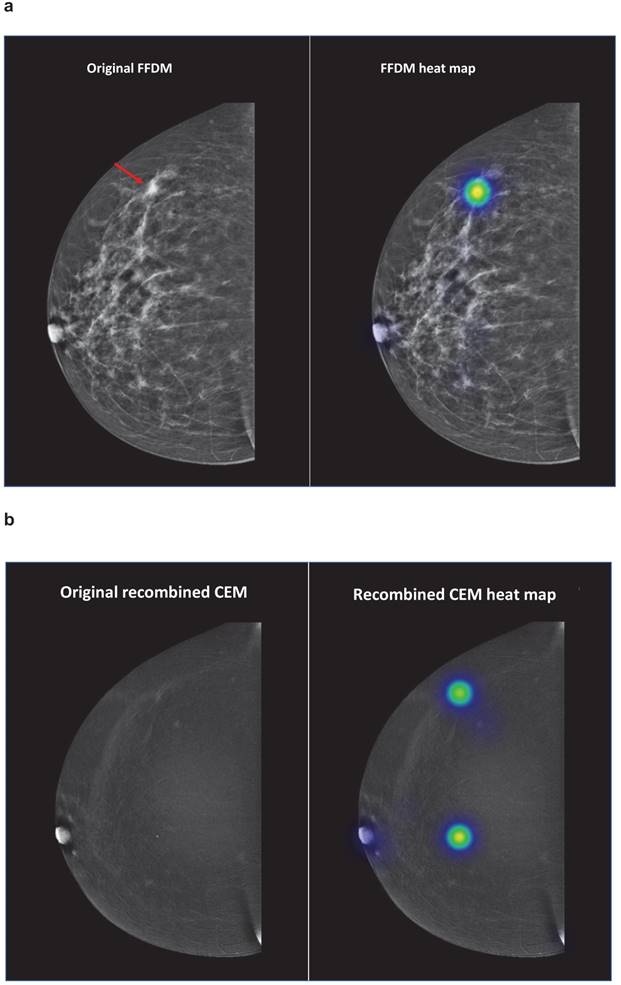 This study investigated the diagnostic performance of non-experienced high school students in detecting breast cancer lesions with FFDM and CEM exams, in a cohort consisting of patients with missed breast cancer lesions according to FFDM evaluations previously performed by breast radiologists. According to our study, mean overall sensitivity of the students was 29% on FFDM and increased to 83% when CEM was used. In addition, sensitivity of CEM seemed slightly higher when compared to FFDM evaluations by breast radiologists, yet not statistically significant (p=0.098). Our results could underline a future potential for automated image-based feature analysis in CEM.

FFDM continues to play an important role in breast cancer imaging, not only for the detection of cancers, but also for evaluation of the extent of disease [20]. However, appropriate interpretation of FFDM requires many years of experience and even after years of experience a large inter-observer variability among radiologists is observed with a sensitivity ranging from 55-82% [21]. Hence, learning to accurately read FFDM exams is time consuming and requires dedicated training to develop expertise. Previous studies have shown that the learning curve of CEM as opposed to FFDM is almost non-existent, as radiologists both experienced and non-experienced in CEM readings achieved comparable diagnostic performances without any prior dedicated training in CEM reading, with an improved sensitivity of ≥90.3% on CEM compared to ≥59.7% on FFDM [15; 16]. Simplification of reading mammograms, as is the case when CEM is performed, could help to train non-experienced physicians (such as surgeons, medical oncologists and radiotherapists). Our study emphasized the ease with which CEM exams can be interpreted, as even high school students without any knowledge of medical imaging are able to interpret these images.

Enhancement of breast cancer lesions on CEM is achieved by administration of a contrast agent in the circulation. The principle relies on the development of new microvessels, which is required to attain tumour growth. These microvessels are often rapidly formed and consequently may lead to 'leaky' basement membranes. This phenomenon enables a contrast agent, administered in the circulation, to leak through these vessels into the tumour itself, resulting in enhancement [22]. Several imaging techniques, like CEM, use this phenomenon to improve visualisation of the tumour. In CEM, two minutes after administration of an iodine contrast agent a set of low and high-energy images are performed. Acquisition of low energy images are obtained at peak kilovoltage (kVp) values ranging from 26-31 kVp, which is below the k-edge of iodine at 33.2 keV. High enery images, at kVp values ranging from 45-49 (i.e. above the k-edge of iodine), are obtained to visualise areas with high concentration of the iodine contrast agent. Yet the high energy images are unable to use for radiologic evaluation. Therefore, recombined CEM exams, consisting of subtraction of low and high-energy mammography images, are performed to visualise areas of contrast enhancement while anatomic noise in the image is neutralized [11; 22].

Besides CEM, contrast-enhanced MRI is another imaging technique which uses the same principle of contrast enhancement to visualise breast cancer lesions [13; 23; 24]. Yet, contrast-enhanced MRI is time consuming, more expensive and less favourable according to patient opinion as opposed to CEM [25; 26]. Furthermore, a recent study of Li. et al demonstrated an equal performance of CEM compared to breast MRI for the detection of breast cancer, with a sensitivity of 100% in both techniques [27]. Therefore, CEM might be able to replace MRI for several indications in near future [28].

Second, students assessed FFDM and recombined CEM exams in one direction only (either CC or MLO view), in contrast to clinical daily practice which consists of two views per breast. In addition, students were focussed to detect enhancing lesions rather than detecting breast cancer on CEM, which could potentially be a confounding factor. Yet, the mean sensitivity of 83% already indicates the important added value of CEM in non-experienced readers, which could potentially even further increase when both views of FFDM and CEM exams were shown or when readers are used to have at least some kind of medical training, albeit not radiological.

In conclusion, contrast-enhanced spectral mammography, evaluated by high school students, might improve the detection of breast cancer when compared to full-field digital mammography evaluations of radiologists. These observations emphasize the ease with which CEM can be interpreted when compared to FFDM, which potentially allows an important role for automated image-based feature analysis.

The authors would like to thank all 134 first- and second year students of the Porta Mosana College (Maastricht, the Netherlands) for their participation in this study. This study did not receive any funding.