Background: The aim of this study was to confirm the role of nuclear pore membrane protein 121(POM121) in oral squamous cell carcinoma and to explore the underlying mechanism.

Methods: POM121mRNA and protein expressions were evaluated in OSCC tissues and normal oral tissues by quantitative real-time polymerase chain reaction (qRT-PCR) and immunohistochemistry. The relationship between POM121 expression and clinical characteristics was analyzed. Bioinformatics analysis was performed to explore the possible mechanisms how POM121 affected OSCC.

Oral cavity cancer is a prevalent malignancy of the head and neck, and an estimated 300,400 new cases and 145,400 deaths occurred globally in 2012[1]. Oral squamous cell carcinoma (OSCC) accounts for 90% of oral malignant cancers, with the 5-year survival rate below 60% [2-4]. In addition to smoking, alcohol and HPV infection, betel quid is also a major risk factor for OSCC in southeast Asia [5-7]. Due to its special anatomical structure, abundant blood vessels and lymphatic vessels, metastasis to cervical lymph nodes or distant organs is the primary cause of mortality in OSCC patients [8, 9]. Therefore, the identification of novel biomarkers and the exploration of underlying mechanisms for metastasis are necessary to improve the clinical management of OSCC patients.

Nuclear pore complexes (NPCs) are large protein cylinders composed of more than 30 nucleoporins (NUPs) that function as the only gateway in the nuclear envelope. NPCs control the communication between the cytosol and the nucleus, and regulate cellular signaling. It was reported that NPCs are involved in cell cycle regulation [10], heterochromatin reorganization[11], transcriptional regulation[12], and RNA processing[13]. Aberrant nucleocytoplasmic transport and the subsequent nucleoporin-associated mislocalization of proteins are responsible for tumorigenesis and proliferation [14]. NUP98, TPR and several other NUPs have been confirmed to have a close relationship with tumors [15-17], but the specific NUPs and underlying mechanisms connected with OSCC require further investigation.

In this study, we analyzed POM121 expression in OSCC tissues and in oral non-tumor tissues and confirmed that POM121 expression was related to tumor proliferation, metastasis, and poor prognosis in OSCC. Our results provide a new insight into the biological characteristics of POM121 in OSCC. Further studies are required to confirm POM121 as a potential biochemical marker for OSCC patients.

Oral tissue was obtained from 298 patients who had undergone surgery or biopsy at the Affiliated Hospital of Nantong University between January 2003 and December 2012. The tissues consisted of 298 OSCC, 50 dysplasia, and 32 normal oral tissue. None of the patients had undergone any neoadjuvant therapy before sample collection. The patients included 134 males and 164 females, with a median age of 35 years (range, 40-75years). Clinical data was collected from patient medical records, and disease clinical stages of OSCC were determined according to the 7th AJCC Cancer Staging Manual. The study complied with the requirements of the Human Ethics Committee of Affiliated Hospital of Stomatology, Nanjing Medical University, and written consent was obtained from all patients.

TMAs were constructed in the Department of Pathology, Affiliated Hospital of Stomatology, Nanjing Medical University. Tissue cores (2 mm in diameter) were collected from donors and arranged in paraffin that was then made into new FFPE blocks. Sections of 4μm-thick were cut and attached to glass microscope slides. After deparaffinization and rehydration, tissues were heated in 0.01 M citrate buffer, pH 6.0 for antigen retrieval, and then incubated in 3% H2O2 to inhibit endogenous peroxidase activity [18]. POM121 was detected with a polyclonal rabbit anti-human POM121 antibody (dilution 1:200; GTX102128, GeneTex, USA) and EnVision peroxidase kit (Dako, Carpinteria, USA). IHC results were evaluated by two pathologists blind to patient data. Staining intensity for POM121 was scored as 0 (negative), 1 (weakly positive), 2 (moderately positive), and 3 (strongly positive) [19]. The final staining score = 3×percentage of strong staining + 2×percentage of moderate staining+ 1×percentageof weak staining. The final staining score ranged from 0 (no staining) to 300 (100% of cells with strongly positive staining). The cutoff point of high and low or no POM121 expression was set as 110.

All data were analyzed using the SPSS 18.0 statistical software package (SPSS Inc, USA). Unpaired Student's t-test was performed to compare two groups. The association between POM121 and clinicopathological features was calculated by Pearson χ2 test. The Kaplan-Meier method was used to analyze cumulative survival rate. The Cox proportional hazard regression model was constructed for univariate and multivariate analyses to confirm the prognostic factors. P values of < 0.05 were defined as statistically significant.

Correlation between POM121 expression and clinical characteristics in OSCC

Association of POM121expression with clinicopathological characteristics in OSCC patients

a, Areas other than the tongue, such as gingiva, buccal mucosa, floor of mouth, lip, etc. 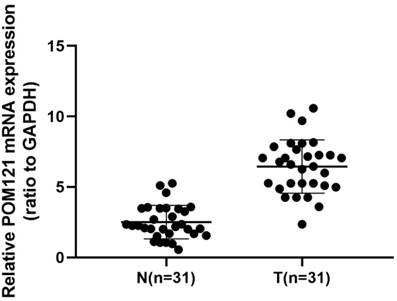 Association between POM121 expression and prognosis in OSCC patients

The main enriched KEGG pathways and interacting proteins of POM121

To explore the role of POM121 in OSCC proliferation and metastasis, an integrative analysis of OSCC microarray was carried out on the base of TCGA database. In the results of GSEA, high POM121 expression group is significantly enriched in adherens junction, axon guidance, cell cycle, hedgehog signaling, lysine degradation and mismatch repair (Figure 4A). We constructed a putative protein interaction network using the STRING interactive database. Each node in the network represented a protein that interacted with POM121, and different colors represent different degrees of closeness. The results showed that NUP62, NUP98, and some other proteins had interactions with POM121 (Figure 4B). 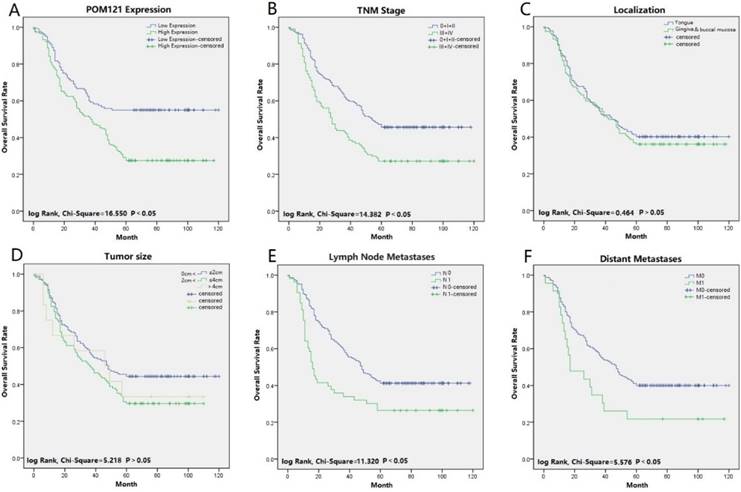 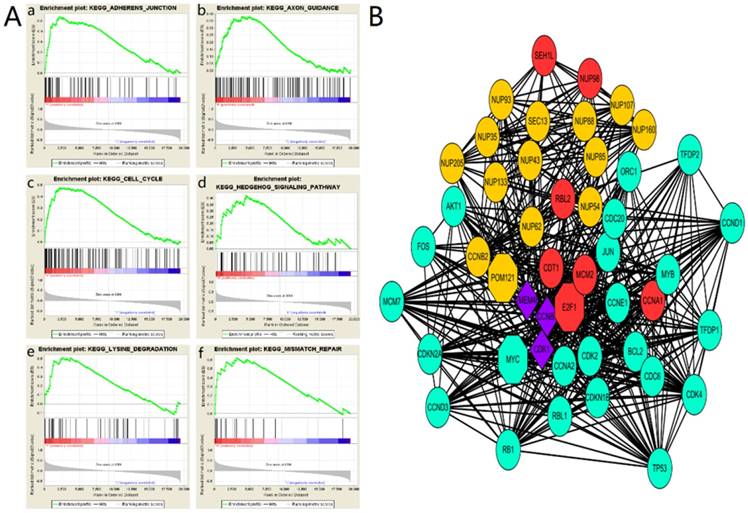 POM121 is a 121 kDa transmembrane NUP that anchors the NPC to the mammalian nuclear membrane and is less conserved than two other vertebrate membrane NUPs, NDC1 and GP210 [20, 21]. POM121 has an important role in NPC assembly, nuclear transport, and cytoplasmic membrane stacks [22-24]. It was reported that the N-terminally-truncated POM121C blocks HIV-1 infection after completion of reverse transcription and before integration [25]. Guo et al. further confirmed that full-length POM121 enables efficient HIV-1 pre-integration complex nuclear import by KPNB1-dependent classical cargo nuclear transportation [26]. Interestingly, POM121 was also found to be involved in the propagation of nuclear apoptosis, which is related to tumorigenesis [27]. POM121 was found to promote proliferation, aggressiveness, and therapeutic resistance in prostate cancer [28]. However, little is known about the relationship between POM121 and oral cancer.

According to IHC analysis, POM121 was found to be located in the nuclear envelope and nucleoplasm. High POM121 expression was detected more frequently in OSCC tissues (59.73%) than in normal oral tissues (18.75%), similar to the observed mRNA expression patterns. We also detected POM121 expression in oral dysplasia tissues and confirmed that high POM121 was expressed in OSCC tissues but not dysplasia (22.00%). Interestingly, the positive expression rates of POM121 in dysplasia did not show a significant difference with normal oral tissues. Insufficient patient samples may account for this phenomenon.

We analyzed 298 samples of OSCC tissues and their associated clinical information to explore the association between POM121 and clinicopathological features. Our findings showed that POM121 expression was significantly connected with distant metastases and TNM stage. High POM121 expression was more common in patients with distant metastases and TNM (III + IV) stage. These results indicated that POM121 was associated with the development and progression of OSCC. Moreover, the correlation between POM121 protein expression and distant metastasis indicated POM121 may be involved in OSCC metastasis.

Little is known about the molecular mechanisms of POM121 in OSCC development and progression. The results of GSEA showed that the expression of POM121 influences adherens junction, axon guidance, cell cycle, hedgehog signaling, mismatch repair and lysine degradation. Mismatch repair is well-known biological activity involved in cancer, and the role of mismatch repair and relevant proteins in oral carcinogenesis and development has grown [29]. Adherens junction refers to the feature of all epithelial sheets and apical adhesive structures, regulating cancer invasion and metastasis [30]. Hedgehog signaling is reported to modulate the tumor microenvironment in several cancers, associated with tumor cell growth, invasion, and metastasis [31, 32]. Hence, we presumed POM121 may participate in tumorigenesis, invasion and metastasis.

Our protein interaction network revealed close connection between POM121 and a large group of proteins, including NUP62, MYC and so on. POM121 may participate in tumor progression through these proteins. The protein network also showed POM121 interacted with NUP62. Interestingly, NUP62 is confirmed to regulate squamous cell carcinoma proliferation by TP63 (a p53 homolog)[33]. POM121 regulates nuclear import of oncogenic MYC through importinβ to promote prostate cancer [28]. Some studies demonstrated MYC is involved in tumorigenesis and progression in OSCC [34-36]. Furthermore, it has been confirmed that soluble POM121 has a role in NUP98-mediated gene regulation by colocalizing and interacting with the transcriptional regulator NUP98, which has been found to participate in the pathogenesis of several hematological malignancies [37, 38]. NUP98 is required for full expression of p21, a critical effector of the p53 pathway, which is associated with OSCC progression [39, 40]. Further studies should to be undertaken to explore if POM121 regulates the expression of MYC and/or p53 signaling pathways.

The expression of POM121 in OSCC tissues is higher than that in normal oral tissues. High POM121 expression is associated with poor overall survival in OSCC patients. Our results show that POM121 has the potential to be considered as an independent prognostic biomarker in OSCC.

We thank H. Nikki March, PhD, from LiwenBianji, Edanz Editing China (www.liwenbianji.cn/ac), for editing the English text of a draft of this manuscript.

This work was supported by the Grant of Maternal and Child Health Research Projects of Jiangsu Province (grant numbers, F201607).

This study was performed in accordance with medical ethical standards and was approved by the Ethics Committee of Nanjing Medical University. Written informed consents were obtained from all study participants.

13. B P, B M. Altered RNA processing and export leads to retention of mRNAs near transcription sites, nuclear pore complexes, or within the nucleolus. Molecular Biology of the Cell. 2016;27:2742-56