Predictors of the Survival of Primary and Secondary Older Osteosarcoma Patients

Purpose: Older osteosarcoma patients have a very poor prognosis and treatment for them remains a challenge. The outcomes and potential prognostic factors of primary or secondary older osteosarcoma patients are rarely documented. Therefore, we examined the prognosis of the two special cohorts to identify possible prognostic factors, and provide optimal treatment strategy for them.

Methods: The Surveillance, Epidemiology, and End Results (SEER) program database was used to identify osteosarcoma patients aged over 40 years from 1973 to 2015. The prognostic analysis was performed using the Kaplan-Meier method and a Cox proportional hazards regression model.

Osteosarcoma is the most common type of primary bone sarcomas and occurs predominantly in children and young adults [1]. The demographic, prognostic, and outcome data of osteosarcoma in children and young adults, or patients of all ages are well documented [2-4]. Current standard treatment of younger osteosarcoma patients includes preoperative chemotherapy, surgical resection of all tumor and postoperative chemotherapy [5]. The 10-year cancer specific survival (CSS) rate for patients with localized/regional osteosarcoma is approximately 70%, while for patients with metastatic disease is 24% [3]. Age at diagnosis, tumor size and site, pathological fractures, tumor grade, metastasis at presentation, and systemic chemotherapy are all associated with the prognosis of osteosarcoma [2, 3, 6, 7].

A total of 6224 patients diagnosed with osteosarcoma of bone were identified from 1973 to 2015. All patient data were obtained using the case-listing session procedure from the SEER program database. The database is publicly available and does not include unique patient identifiers. This study followed standard guidelines and was approved by the Ethics Committee of the Second Affiliated Hospital of Zhejiang University School of Medicine.

First, the International Classification of Diseases for Oncology, 3rd edition (ICD-O-3) was used to identify patients with osteosarcoma of bone (ICD-O-3 histologic type: 9180-9187, 9192-9195; ICD-O-3 site code: C40.0-40.3, C40.8-41.4, C41.8-41.9), using the case-listing procedure. Only patients aged over 40 were enrolled, by reference to the age at diagnosis. Previous researches also recognized osteosarcoma patients aged over 40 as older osteosarcoma patients. All patients were confirmed histologically, based either on biopsy results or the surgical specimen. One hundred and forty-four patients diagnosed only on the basis of the clinical presentation, or according to the radiography were excluded. Twenty-five patients with unknown therapy were excluded. Sixty-five patients with missing survival information or survival month ≤ 1 were also excluded. The sequence number was used to classify older patients as having a primary osteosarcoma without any other primary malignant tumors (sequence number ≤ 1) (n =1162) and as having osteosarcoma as a secondary malignancy (sequence number ≥ 2) (n = 444) (Figure. 1). Data extracted from the SEER database included age, gender, race, year of diagnosis, location, tumor grade, tumor stage, tumor type, tumor size, surgical treatment, radiation treatment, chemotherapy, cause of death, and survival time. Surgery or radiation treatment for tumors in our study refers to treatment for local primary tumors. We divided the location into three categories: (1) appendicular (long and short bones of the upper and lower extremities), (2) axial (pelvis and spine), and (3) other locations (mandible, skull, rib, sternum, clavicle, and other atypical locations). Given that age is an important predictor for survival of osteosarcoma, we further divided older osteosarcoma patients into two categories ( ≤ 60 group and >60 group) according to the mean and median age at diagnosis.

The statistical analyses were performed using Microsoft Excel 2016 (Microsoft Corp., Redmond, WA, USA) and SPSS software (ver. 21.0; SPSS Inc., Chicago, IL, USA). Overall survival (OS) was defined as the time from diagnosis to death from any cause and cancer-specific survival (CSS) was regarded as the time from diagnosis to death due specifically to cancer. The Kaplan-Meier method was used to draw the OS and CSS curves and calculate median survival. Observations were censored if the patient was alive at the time of the last follow-up. Univariate analyses were performed using the Kaplan-Meier method with the log-rank test. Multivariate analysis was used to determine the independent predictors of OS and CSS with a Cox proportional hazards regression model. The hazard ratios (HRs) and corresponding 95% confidence intervals (CIs) were used to show the effect of various factors on OS and CSS. Differences were deemed statistically significant if the P-value was less than 0.05. 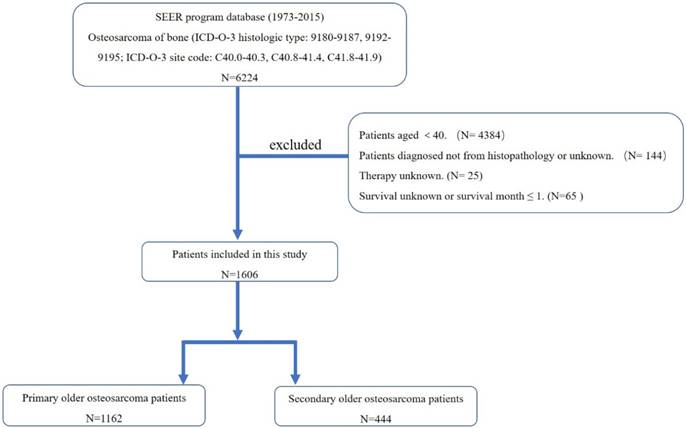 Demographic and clinical characteristics of osteosarcoma patients aged over 40

In total, 1606 patients were eligible for our study, including 1162 primary older osteosarcoma patients and 444 secondary older osteosarcoma patients. In primary older osteosarcoma cohort, the mean and median patient age at diagnosis were 58 and 56 years, respectively. In terms of location, 54.8% tumors were located in the extremities, 19.4% in the axial skeleton, and 25.8% in other sites. Histologically, 13.6% of the cases were low grade, and 52.7% were high grade. The majority of the patients were diagnosed as osteosarcoma, not otherwise specified (NOS) (71.9%). Information on the tumor size was available in 62.3% cases, and was categorized into three groups. More than two thirds of the patients (75.5%) received local surgery, 272 patients (23.4%) received radiation treatment, and about half of patients had chemotherapy. Ultimately, 781 patients (67.2%) died, of whom 631 died of cancer. The 3- and 5-year OS rates of the entire cohort were 47.1% and 38.5%, respectively. The 3- and 5-year CSS rates were 45.6% and 37.1%, respectively (Table 1). The median OS and CSS were 30.0±2.6 and 28.0±2.4 months, respectively, suggesting a poor prognosis for this cohort (Table 2).

Univariate analyses of variables associated with survival of older osteosarcoma patients are shown in Table 3. Among primary older osteosarcoma patients, univariate analyses revealed that race was not associated with either OS or CSS. Female patients had significantly better outcomes than male patients, with a longer median survival. OS and CSS showed a statistically significant difference in survival based on decade of diagnosis. Patients with axial tumor location had worse outcomes than those with appendicular or other tumor locations. Both OS and CSS differed significantly with tumor grade, with a high tumor grade portending a worse prognosis.

Due to the frequent axial occurrence and metastasis in this age group, the outcome is usually poor. Iwata et al. [10] found that the 5-year OS and Event-free survival (EFS) in 86 osteosarcoma patients aged over 40 were 38% and 34%, respectively. Carsi et al. [21] reported that the 5-year OS and EFS rates were 41.64% and 32.54%, respectively. However, Ozkurt et al. [11] reported that the survival rate of the same age group was 76.2% at 2 years and 72.8% at 5 years in 36 cases. It is possible that their follow-up time is too short (median: 7 months) and treatment is more aggressive.

OS: overall survival, CSS: cancer-specific survival, N/A means that the median survival time was not available due to death event occurring in fewer than 50% of cases in the cohort. SE: standard error.

Ferrari et al. [12] reported that the 5-year OS of bone-sarcoma patents aged over 40 and synchronous metastases was 22%. In our study, the 3- and 5-year OS rates of the primary older osteosarcoma were 47.1% and 38.5%, respectively, while the 3- and 5-year OS rates of the secondary older osteosarcoma were 22.8% and 14.6%, suggesting a pretty poor outcome. Thus, it is necessary to explore prognostic factors to better guide the management of such patients. 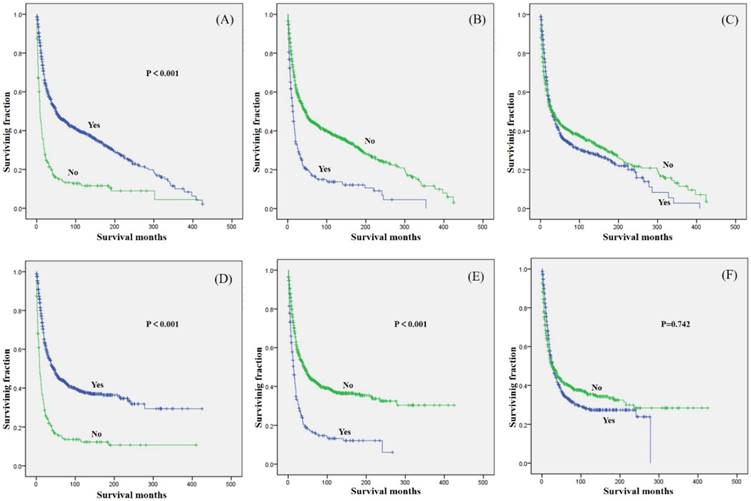 Kaplan-Meier method estimated OS in secondary osteosarcoma patients aged over 40 years stratified by (A) surgery, (B) radiation, and (C) chemotherapy.

This study had several limitations. First, this study was a retrospective study from a large secondary database, which does not provide access to detailed clinical information. Prospective study should be performed to further confirm our conclusion. Second, the SEER database does not include other important information such as time to recurrence during follow-up, radiotherapy regimen and molecular pathological characteristics, which may affect the prognosis of patients. These variables may be an effective complement to this study, which will be an important section of our future research. Third, only 452(38.9%) of the primary osteosarcoma patients were older than 60-years, whereas 289(65.1%) of the secondary osteosarcoma patients were older than 60-years. Thus, there was age difference between the primary and secondary osteosarcoma patients. Age was an independent predictor of both OS and CSS in the primary older osteosarcoma patients. However, age was not an independent predictor of OS in the secondary older osteosarcoma patients. Thus, we think the OS and CSS rates between these two groups could be compared to a certain extent. But we also think more clinical researches should be done to get more convincing results. Despite these limitations, our large sample size along with demographic and tumor data allows for the investigation of important associations and predictors of older osteosarcoma. Additionally, the SEER database provides high statistical power due to the collection of data from multiple centers.

This work was supported by the grants from National Key R&D Program of China (2018YFC1105400), National Natural Science Foundation of China (81702118), 2018 Zhejiang University Academic Award for Outstanding Doctoral Candidates and Medical and Health Science and Technology Plan of Department of Health of Zhejiang Province (WKJ-ZJ-1821).

33. Rashidghamat E, Calonje JE. A case of radiation-induced osteosarcoma of the skull presenting as a cutaneous epidermotropic tumor with a short latent period. Journal of cutaneous pathology. 2018;45:352-4