As a classical ligand in the canonical Wnt/β-catenin signaling pathway, the role of Wnt3a in laryngeal squamous cell carcinoma (LSCC) remains unclear. Therefore, the expression pattern of the Wnt3a protein in 222 primary LSCC, and 19 corresponding adjacent non-carcinoma specimens, was detected by immunohistochemistry and further correlated with clinicopathological parameters. The results showed that LSCC tissue expressed higher levels of the Wnt3a protein when compared to the corresponding adjacent non-cancerous tissues. High expression of Wnt3a was closely related to histological grade (P = 0.031), clinical stage (I+II / III+IV; P = 0.004), and lymph node metastasis (P = 0.03). Kaplan-Meier analysis evidenced that a worse overall survival (OS) was correlated to the group with high Wnt3a expression (P = 0.003). When stratified survival analyses were performed, patients with lymph node metastasis/advanced clinical stages and high Wnt3a expression had worse OS rates than patients with other features (P < 0.001). Finally, multivariate analysis showed that Wnt3a expression was an independent prognosis factor for LSCC patients. The current findings suggest that Wnt3a is tightly related to the LSCC progression and could serve as a valuable clinic biomarker for LSCC patients.

Laryngeal squamous cell carcinoma (LSCC) is the second most common head and neck type of cancer globally, being a major cause of the death from cancer-related diseases [1, 2]. Recent decades witnessed that patients with LSCC have benefited from early diagnosis and multimodal interventions, including routine surgery, chemotherapy, radiotherapy, and biological therapy. However, clinical outcomes for patients with LSCC remain discouraging, especially in advanced cases [3-5]. Cervical lymph node metastasis has been reported as a decisive factor contributing to the dismal prognosis in post-treatment patients [3, 4]. Nevertheless, the molecular mechanism of cancer initiation and progression remains unclear. Therefore, clarifying sensitive and specific molecular markers that can predict clinical outcomes of patients with biologically aggressive neoplasms is of great significance for developing more effective strategies for the prevention and treatment of patients with LSCC.

Wnt3a is a classical member of the Wnt family, which comprises 19 homologous ligands [6]. The aberrant increase in Wnt3a expression level has been previously reported in several human malignancies and has been correlated with tumor progression, recurrence, and metastasis, predicting worse clinical outcomes [11]. However, few studies deal with the expression pattern and prognostic significance of the Wnt3a protein in LSCC. To provide a deeper insight into the roles of Wnt3a in LSCC, 222 LSCC tissue samples were studied to detect Wnt3a expression level and their relationship to clinicopathological parameters.

In brief, archival paraffin-embedded cancer tissue and adjacent non-cancerous epithelial tissue samples from 222 patients with LSCC were analyzed in this retrospective study, for which tissue specimens and related information were available and collected. The samples were collected from January 2000 to October 2010. Patients with LSCC enrolled in our study had to follow these inclusion criteria: primary laryngeal squamous cell carcinoma without other malignancies and no history of previous radiotherapy or chemotherapy. Recurrence and metastasis were established based on physical examination, imaging results, and pathological investigations. Pathological (TNM) stage was determined according to the 7th American Joint Committee on Cancer (AJCC) staging system. The main clinical and pathological variables of the patients such as sex, age, primary tumor site, histological grade, T classification, clinical stage, and lymph node metastasis are described in Table 1. Informed consent was collected from all patients with LSCC before surgery, and all experiments were approved by the Research Ethics Committee of Central South University, Changsha, China.

Immunohistochemistry was performed as reported previously [12-14]. In brief, antigen retrieval was carried out in 10 mM citrate buffer (pH 6.0) in a microwave oven for 15 min. The activity of endogenous peroxidase was exhausted with 3% hydrogen peroxide for 10 min at room temperature. Anti-Wnt3a polyclonal antibody (Cat. CSB-EL026136HU, Cusabio Technology, Houston, TX, USA) was applied overnight at 4 °C at an optimal working dilution of 1:600. After sufficient phosphate-buffered saline rinses, sections were immunostained with horseradish peroxidase-labelled goat anti-rabbit polymers. Finally, positive staining of Wnt3a protein was visualized with 3′, 3′-diaminobenzidine, and the cell nucleus was counterstained with Mayer's hematoxylin. For negative controls, we used immunoglobulin G in the place of the anti-Wnt3a antibody under the same experimental conditions and co-incubated the anti-Wnt3a antibody with recombinant Wnt3a polypeptide to confirm the specificity of the anti-Wnt3a antibody applied in our experiment.

All immunohistochemical slides were blindly assessed and scored by two independent investigators. If a disagreement occurred, the slides were re-examined to obtain a final consensus. A Wnt3a staining index (SI), ranging from 0 to 7, was finally determined as the sum of the values obtained for the staining intensity and the proportion of immunopositive cancer cells for each sample. Staining intensity was classified as 0 to 3, in which 0 point meant no intensity, 1 point meant weak intensity, 2 points meant moderate intensity and 3 points meant strong intensity. In addition, the proportion of immunopositive cancer cells was ranked into four groups: <10% = 1, 10-34% = 2, 35-70% = 3, and >70% = 4. The expression level of Wnt3a was categorized as low expression (SI = 0-2), middle expression (SI = 3-4), and high expression (SI = 5-7) based on the final SI values [15].

In this patient cohort, metastasis was determined by imaging results and clinical and pathologic examination. Two hundred and seven patients with LSCC (93.2%) had a full-range post-operational follow-up, and intact clinical information was obtained. Only 15 patients failed their follow-ups because their addresses or telephone numbers were changed. Overall survival (OS) was calculated from the day of surgery to the date of death or tumor relapse. Death of patients with LSCC resulting from other causes was defined as censored cases.

(a) P ≤ 0.05 was considered to be statistically significant and significant P-values were indicated in bold. (b) G1, G2, and G3 were defined as well, moderately, and poorly differentiated tumors, respectively.

All statistical analyses were performed using the software SPSS, v.17.0 (SPSS Inc., Chicago, IL, USA). The χ² test was used to analyze the associations between various clinicopathological parameters and Wnt3a protein expression. Survival analysis was assessed by the Kaplan-Meier method and survival curves were determined by the log-rank test. Univariate and Multivariate analyses for independent prognostic indicators were performed by the Cox proportional hazards model. P < 0.05 was considered statistically significant.

Wnt3a is overexpressed in LSCC specimens

Associations between the expression of Wnt3a protein and clinicopathological parameters

We further investigated the associations between Wnt3a expression and several clinicopathological parameters. As summarized in Table 1, Wnt3a overexpression was significantly associated with histological grade (P = 0.031), clinical stage (P = 0.004), and cervical lymph node metastasis (P = 0.030). However, no significant correlation was observed between the expression of Wnt3a protein and parameters such as age (P = 0.746), gender (P = 0.095), tumor site (P = 0.776), and tumor T classification (P = 0.356). These results suggest that Wnt3a expression is closely related to the progression of LSCC.

(a) Abbreviation: 95% CI, 95% confidence interval. (b) P ≤ 0.05 was considered to be statistically significant and significant P-values were indicated in bold. 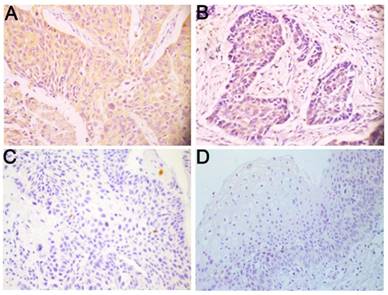 Kaplan-Meier analysis and log-rank test for overall survival in LSCC patients with differential expression of Wnt3a. 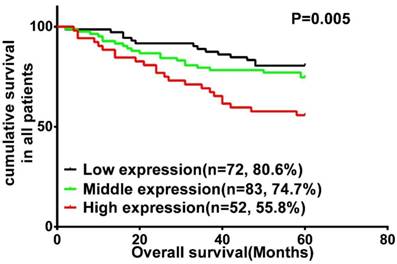 In this study, we aimed to explore the role of Wnt3a in the pathogenesis of LSCC. Our results demonstrated that Wnt3a expression was higher in LSCC tissues than that in normal tissues, and that it was also significantly associated with histological grade, clinical stages, and lymph node metastasis. Finally, we found that high Wnt3a expression was an independent adverse prognostic factor for overall survival, especially when combined with advanced clinical stage and lymph node metastasis status. All these data suggest that Wnt3a expression may play an oncogenic role in LSCC.

In our investigation, our data showed that higher Wnt3a expression meant worse histological grade, advanced clinical stage, and higher cervical lymph node metastatic potential in LSCC patients. In fact, metastasis was deemed as an essential factor to estimate clinical stages, and it was also prone to occur in less-differentiated malignancies. This result is consistent with those of previous studies investigating colorectal cancer [20, 34], hepatocellular carcinoma[25, 26], lung cancer [21], and melanoma [28], in which overexpression of Wnt3a could significantly enhance the invasion and migration potential of tumor cells by inducing epithelial-to-mesenchymal transition (EMT) and the metastasis-related protein matrix metalloproteinases (MMP)-2, -7, and -9. In addition, Wnt3a has been reported to be involved in the induction of CSC characteristics both in vitro and in vivo [16, 35]. All these evidence clearly reveals that Wnt3a is a potential cancer metastasis-associated protein.

Serum Wnt3a has been previously reported as a useful diagnostic biomarker for hepatocellular carcinoma, particularly in the alpha-fetoprotein (AFP)-negative cases [36]. Whether the expression of serum Wnt3a protein in patients with LSCC has an important diagnostic value deserves further investigation. However, that objective is beyond the scope of this study. Previous studies have found that Wnt3a can mediate Wnt signaling pathway activation by both autocrine and paracrine signaling loops in the tumor microenvironment (TME). This causes immunosuppression by preventing the capacity of naïve T-cells to differentiate into effector T-cells. Wnt3a also promotes CSC characteristics in the tumor through the perpetuation of a paracrine signaling loop in cancer cells and cancer-associated fibroblasts (CAF) [10, 35]. However, the role of Wnt3a in the tumor microenvironment is not fully understood. We will further explore the effects of Wnt3a on T-cells and macrophages in LSCC through in vivo and in vitro experiments.

In conclusion, this is the first study to explore the prognostic value of Wnt3a protein in LSCC and found that the upregulated expression of Wnt3a protein is a predictor of multiple cancer malignant processes such as histological grade, advanced clinical stage, and lymph node metastasis. Univariate and multivariate analyses indicate that Wnt3a is an independent prognostic factor in patients with LSCC and is a useful biomarker for assessing lymph node metastasis and prognosis in patients with LSCC. We will further explore the molecular regulatory mechanisms related to Wnt3a, which may lead to Wnt3a becoming a new target of molecular-targeted therapies for LSCC. 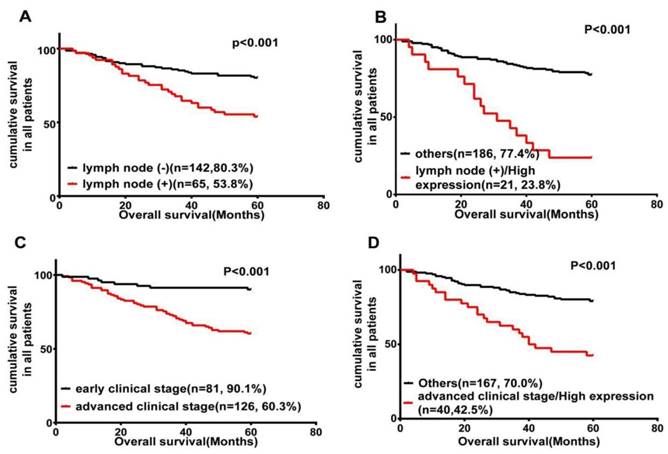