Background and objectives: In patients with metastatic renal cell cancer (mRCC), cytoreductive nephrectomy (CN) may occasionally be performed. However, the role of lymph node dissection (LND) for such cases is unknown in era of target therapy. To test the effect of LND at CN on cancer-specific survival (CSS), overall survival (OS) in era of target therapy compared with no LND in patients with mRCC.

Methods: A total of 4690 mRCC patients treated with CN were identified within the Surveillance, Epidemiology, and End Result (SEER) database (2006-2015). Survival differences were assessed by Kaplan-Meier estimate and compared using log-rank test. Multivariable Cox regression analysis (MCR) was used to evaluate the effect of LND on CSS and OS.

Conclusion: We are the first to demonstrate that LND at CN is associated with poor CSS and OS in metastatic patients with ccRCC and non-ccRCC. Considering that the current study is retrospective, these findings' impact on clinical practice needs to be further verified in future validation studies.

Renal cell cancer (RCC) is one of the worldwide common carcinomas, with approximately 403,262 new cases and 175,098 deaths expected in 2018[1]. At the time of diagnosis, about 20-30% patients are presented with metastatic disease, namely metastatic RCC (mRCC)[2]. During an era when mRCC was treated with cytokines, a 31% decrease in the risk of mortality and significantly improved median overall survival (OS; 13.6 vs 7.8 months) have attributed to cytoreductive nephrectomy among patients with mRCC[3]. Although succedent targeted therapies have resulted in the progression free survival (PFS) and/or OS benefit, 75-100% of mRCC patients still have had prior nephrectomy[4]. However, it is unknown whether the beneficial effect in the target therapy era could further be improved from cytoreductive nephrectomy (CN) combined with lymph node dissection (LND) in the setting of mRCC. There is growing need for evidence on the indications, safety and outcomes of LND in patients with RCC. The role of LND in RCC patients is controversial, and related literature were limited. A systematic review discussing the LND in RCC concluded that the extent of the most commonly dissected templates might be insufficient to catch the overall anatomic pattern of lymphatic drainage from RCC due to the unpredictable renal lymphatic anatomy and the evidence from available prospective mapping studies[5]. Similarly, another systematic review reported that indication and techniques of LND are still controversial for upper tract urothelial carcinoma (UTUC)[6].

Based on this consideration, we evaluated whether LND at cytoreductive nephrectomy in mRCC patients might be associated with oncologic outcomes, compared with no LND. To test this hypothesis, we relied on the most contemporary population-based cohort of mRCC patients treated with cytoreductive nephrectomy from within the Surveillance, Epidemiology, and End Result (SEER) database.

For the purpose of our study, the study cohort was strictly selected from the Surveillance, epidemiology, and End Results (SEER) database, which encompasses approximately 28% of the American population. As shown in Fig 1, the SEER-stat software (SEER* 8.3.4) was used to extract target population: primary renal cancer patients (international Classification of Disease for Oncology [ICD-O-3], site code C64.9) diagnosed between January 1, 2006 and December 31, 2015 (N = 134,874) based on target therapy started being commonly used for kidney cancer in US after 2006. Moreover, metastatic renal cancer patients underwent radical or complete nephrectomy (N = 6,526) were qualified for further analyses. Included histological subtypes were: clear cell RCC, papillary, chromophobe, sarcomatoid, cyst-associated RCC, collecting duct carcinoma, and any RCC. Cancer specific survival (CSS) was defined according to the SEER mortality code. Further exclusion criteria were lack of data regarding LND (n = 1157), and age < 18 years (n = 9) and unknown cancer-specific death or survival month (n=670). All patients had available data on follow-up. These selection criteria yielded 4690 patients (Fig.1).

Medians and interquartile ranges (IQR), as well as frequencies and proportions were reported for continuous and categorical variables, respectively. The difference between groups was compared using x2 test or Fisher's exact test for categorical variables and t test for numerical variables. Survival differences between the LND and non-LND groups in each set, and survival differences of patients with different number of positive lymph node (NPN) and with different number of resected lymph node (NRN) were assessed by the Kaplan-Meier estimate and compared using the log rank test. Multivariate Cox regression analysis and data stratification analysis were performed to test the independent prognostic role of LND in predicting CSS. All statistical analyses were performed using the R software (version 2.15.0, www.r-project.org). All statistical tests were two-sided with a level of significance set at p value < 0.05.

Baseline characteristics of 4690 of metastatic renal cell cancer patients treated with radical nephrectomy within the Surveillance, Epidemiology and End Results database, stratified according to the presence or absence of lymph node dissection. 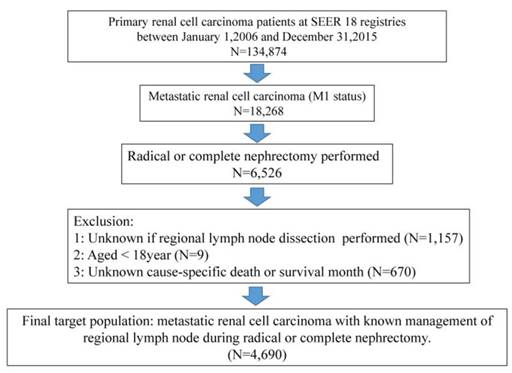 In several urologic tumors, LND seemed to improve survival. There was growing evidence that an extensive LND may offer a survival advantage in patients with lymph-node negative and positive bladder cancer[7]. Meanwhile, the survival benefits that LND at radical prostatectomy was related with lower cancer specific mortality and overall mortality were obtained in the setting of metastatic prostate cancer[8]. Based on the premise that complete resection or cytoreductive surgery may improve response to systemic therapy and overall oncologic outcomes, the rationale for a potential oncological benefit to LND was generated[9]. Although no survival advantage of a complete LND in conjunction with a radical nephrectomy was found in N0M0 patients with RCC[10]. Observational data before the era of target therapy have suggested a survival advantage to LND in higher-risk patients (ie, enlarged lymph nodes)[11-14].

Recently, Feuerstein and colleagues[15] concluded that LND carried out during cytoreductive nephrectomy is not associated with a survival benefit. Whether the extent of LND impacts oncologic outcomes was evaluated in several studies. One population-based study[16] reported improved CSS with increased lymph node yield among node-positive patients. Another study[17] demonstrated improved CSS with a greater extent of LND among patients with pT2 tumors, pT3c-pT4 tumors, or tumors with sarcomatoid features. 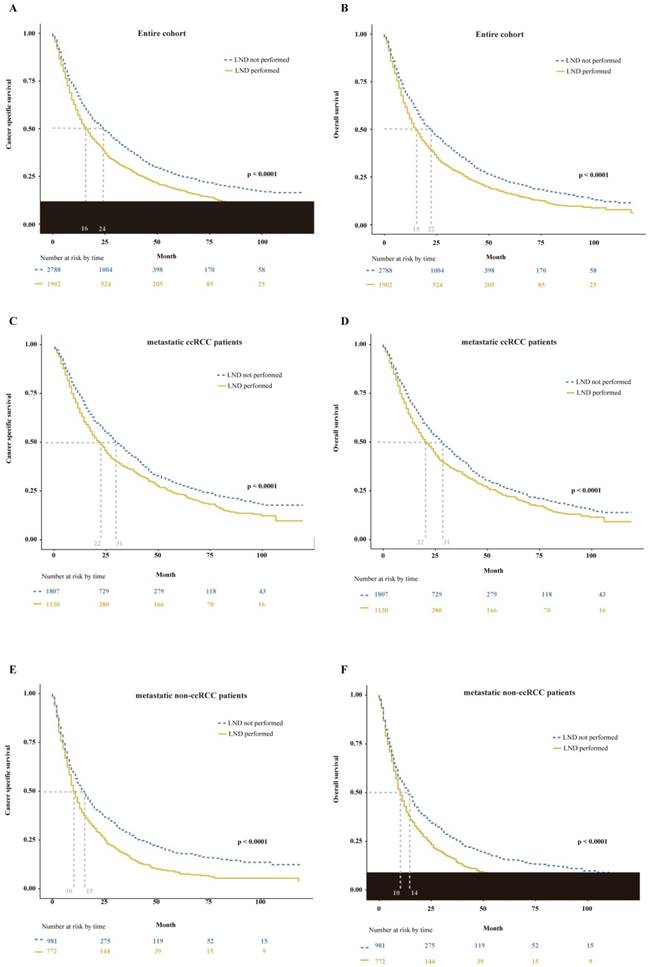 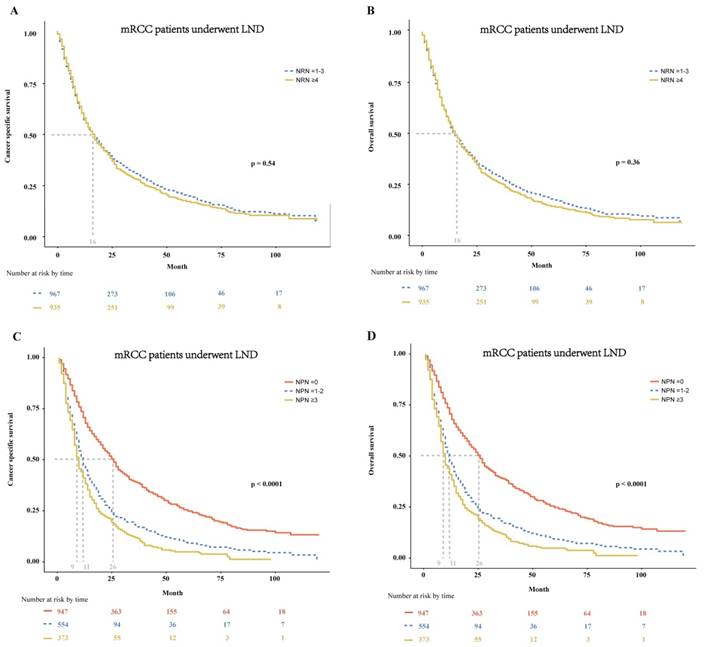 Interesting, we identified a damaged effect of LND at cytoreductive nephrectomy on CSS and OS in the SEER database (2006-2015) selected according to target therapy started being commonly used in the US after 2006. And the NRN was not associated with oncological outcomes. These results were not consistent with previous studies[15-17]. Although the finding that the NPN was related with worse prognosis in our study was supported by other researches[15, 18], LND for providing important staging information should be cautiously performed in mRCC patients. For RCC patients with clinically negative lymph nodes, the indication for LND together with partial nephrectomy or RN is still controversial[14]. And according to the EAU guideline, in patients with localised disease without evidence of lymph node metastases, a survival advantage of LND in conjunction with RN is not demonstrated in randomized trails[19]. When it comes to the treatment of locally advanced RCC patients with clinically positive LNs (cN+), LND is always justified[20]. However, the extent of LND remains controversial[11]. And the EAU guidelines suggest that in patients with locally advancer disease due to clinically enlarged lymph nodes, the survival benefit of LND is unclear but LND can add staging information[19]. Nevertheless, the EAU guideline failed to provide suggestions in the aspect that whether LND should be performed for mRCC patients. There are several potential explanations to reconcile the different findings. Firstly, LND at nephrectomy in mRCC may translate into higher early complication rates, and the CSS and OS benefits associated with LND at nephrectomy may be undermined by higher rates of adverse early postoperative outcomes. It is also possible that earlier administration of target therapy for mRCC patients may have mitigated the benefit of LND at the time of nephrectomy[21]. More importantly, mapping studies[22] detected direct lympho-venous communications to the renal vein and inferior vena cava, and therefore RCC may be less likely to have a prolonged loco-regional phase and enhanced local control in the retroperitoneum may not translate into a survival benefit. In conclusion, the benefits and harms of LND for mRCC patients are difficult to report given the low quality of most available series, especially the lack of granular data on surgical quality metrics.

Despite the novelty of our findings, limitations need to be acknowledged. Firstly, our study was based on the data from SEER database which did not provide sufficient individuals' information, such as patients' performance status, number and specific locations of metastases, type of systemic therapies (ie, target therapy), postoperative complications, as well as other established predictors associated with mRCC patients' survival, so additional sets of independent samples from clinical trials are needed to prospectively confirm our findings. Secondly, because the SEER database do not precisely recorded the approach of LND, the impact of whether template-based LND or not on mRCC patients' outcomes could not evaluated. Thirdly, the choice leading the surgeon to perform or not LND (selection bias) and lack of information on metastatic burden of the disease may influence our findings. Additionally, these results require validation in patients undergoing partial nephrectomy. Moreover, no data regarding type of systemic therapies (ie, target therapy) were available, these variables should also be considered in future analyses. Last but not least, several important information mentioned above, and baseline hematological and/or biochemical blood values that represent established predictors of survival in mRCC patients, were not available in sets of the current study, and further analysis stratified by these features are necessary in the future research.

To the best of our knowledge, we are the first to demonstrate that LND at cytoreductive nephrectomy was associated with lower CSS and OS relative to non-LND in metastatic patients with ccRCC and non-ccRCC. And there was no association of NRN with survival. These findings displayed that LND should not be considered at cytoreductive nephrectomy in the setting of mRCC patients. Considering that the current study is retrospective, these findings' impact on clinical practice needs to be further verified in future validation studies.

We would like to thank all laboratory members for their critical discussion of this manuscript, and apologize to those not mentioned due to space limitations.

4. Bhindi B, Abel EJ, Albiges L. et al. Systematic review of the role of cytoreductive nephrectomy in the targeted therapy era and beyond: an individualized approach to metastatic renal cell carcinoma[J]. EUR UROL. 2019;75(1):111-128