Background: Ovarian clear cell carcinoma (OCCC) has a worse prognosis compared to other histological subtypes. Although the survival effect of lymph nodes ratio (LNR) on ovarian carcinoma have been elucidated in several studies, the prognostic effect of LNR in OCCC has not been separately studied. This study aimed to investigate the prognostic significance of LNR in FIGO stage III OCCC.

Lymph node ratio (LNR), defined as the ratio of the number of metastatic lymph nodes (MLNs) to the number of resected lymph nodes (RLNs)[11], has been proved as an independent prognostic predictor in several malignancies including nonsmall cell lung cancer[12], breast cancer[13], cervical cancer[14], endometrial cancer[15], and EOC [8, 16-19]. However, the previous studies investigated the survival predictive value of LNR in all histologic subtypes of EOC and did not validate their results in another independent population.[8, 16-19]. In addition, the prognostic impact of LNR in ovarian clear cell carcinoma (OCCC), which accounts for approximately 5% to 25% of primary EOC, has not been separately clarified. [20] Furthermore, advanced OCCC, prone to chemo-resistant, has decreased survival compared with other histologic subtypes of EOC.[2, 20, 21] Moreover, there has no previous study assessed the prognostic role of LNR in Chinese population with advanced OCCC.

In the current study, we aimed to investigate the prognostic significance of LNR in two independent cohorts of Chinese patients with FIGO stage Ⅲ OCCC.

OCCC patients who underwent surgical staging and lymphadenectomy in West China Second University Hospital, Sichuan University, and The Affiliated Hospital of Southwest Medical University from January 2008 to June 2014 were reviewed. Patients were enrolled into study according to the following inclusion criteria: (1) patients with a diagnosis of FIGO stage III; (2) patients underwent total hysterectomy, salpingo-oophorectomy, pelvic and para-aortic lymphadenectomy, omentectomy, and resected any suspicious and/or enlarged disease; (3) LNs metastasis positive; (4) no residual disease or residual disease <1cm. Patients who had received neoadjuvant chemotherapy and interval debulking surgery were excluded from this study. The patient's age at diagnosis, clinicopathologic characters, treatment, and survival status was collected from the patients' medical records and clinical follow-up visits. 35 LNs was used as the cut-off value of systematic lymphadenectomy according to previous literature reported [21]. To investigate the survival impact of LNR, LNs positive patients were assigned into two groups according to reported [8]: LNR1 (LNR≤25%), and LNR2 (>25%). The primary outcome was overall survival (OS) and progression-free survival (PFS). Patients from January 2008 to December 2012 was arranged in the training cohort, while patients from January 2013 to June 2014 was arranged in the validation cohort.

Clinical characteristics of the patients in training and validation cohort

*The patients with peritoneal cytology status not available were not included.

We further confirmed our results in the validation cohort. The patient baseline data and the association between the LNR and patient clinicopathologic characteristics also are showed in Table 1 and Table 2. The result indicated that the elevated LNR was correlated with worse PFS (p = 0.037) and OS (p = 0.011) (Figure 3). Univariate and multivariate analyses also proved the prognostic role of LNR (Table 4).

In the current study, we verified that LNR is an independent survival predictor for FIGO stage Ⅲ OCCC patients. Patients with elevated LNR (LNR>0.25) have a worse PFS and OS.

Effect of the number of resected lymph nodes on progression-free survival (A) and overall survival (B). Kaplan-Meier. 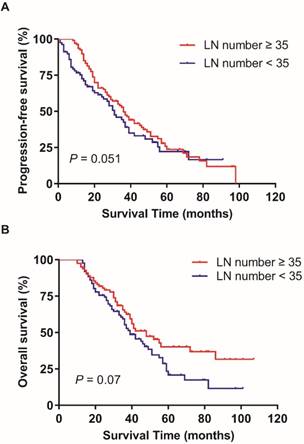 Effect of LNR (lymph node ratio) on progression-free survival (A) and overall survival (B) in training cohort. Kaplan-Meier. 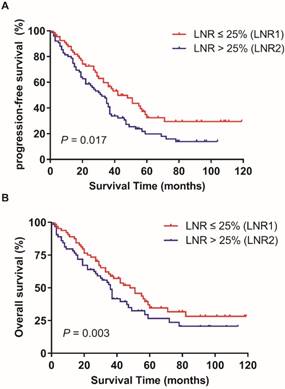 Effect of LNR (lymph node ratio) on progression-free survival (A) and overall survival (B) in validation cohort. Kaplan-Meier. 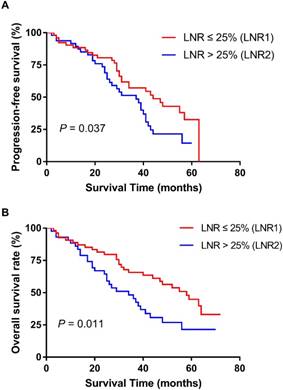 The optimal lymphadenectomy cut-off value in OCCC patients has not been defined. Takei et al. showed that patients with ≥35 LNs removed have an improved recurrence-free survival.[21] Pereira et al. study defined optimal lymphadenectomy cut-off value was at least obtain 15 pelvic LNs and 7 aortic LNs.[27] However, the number of metastatic LNs is depended on many factors such as the surgeon and the pathologist's distinct experience in searching for positive LNs, the patients' anatomic variation, the extent of the tumor, and patients'age.[16, 17] Hence, the limitation of use LNs status to predict survival might be addressed by using LNR.

The prognostic role of LNR has been discussed in advanced EOC. Ataseven et al. [8] found the 5-year OS rates were higher in patients with LNR ≤ 0.25 compared to patients with LNR > 0.25 (42.5% vs.18.0%). Ayhan et al. [17] focused on the FIGO stage III high-grade ovarian serous carcinoma (HGOSC), which also have a poor prognosis. They found the 5-year OS was decreased from 65.1% in LNR1(<10%) to 42.5% in LNR2(10%≤LNR<50%), and to 25.6% in LNR3(≥50%), LNR also was an independent survival predictor for OS. In the current study, we proved LNR was an independent predictor for decreased PFS and OS in FIGO stage Ⅲ OCCC patients. These results validated the feasibility of use LNR to predict prognosis in FIGO stage Ⅲ OCCC.

The LNR cut-off point used to assign patients to a lower or higher LNRs group has not been well defined. [8, 16-18] In this study, we used the LNR cut-off value described by Ataseven et al. [8]. Further studies are needed to establish a standard LNR cut-off point. In addition, in the lymphadenectomy in ovarian neoplasms (LION) study, although 56% EOC patients had LNs micro-metastases, systematic lymphadenectomy offers no benefit to patients who underwent maximum or optimal cytoreduction and had clinically and radiologic negative lymph nodes.[28] In our study, we defined optimal lymphadenectomy as the LION study described.[28] The result indicated that LNR might an independent predictor for worse OS and PFS in FIGO stage Ⅲ OCCC patients with LNs metastasis. However, the resected LN number did not have survival effects in patients with OCCC.

Compared to previous studies, our study has several advantages. Above all, this is the first study investigating the prognostic role of LNR in OCCC based on Chinese population. Previous studies all based on European population [8, 17] or the SEER (Surveillance, Epidemiology, and End Results) database from the United States. [16, 18, 19] The postoperative adjuvant therapy information does not provide in SEER. Secondly, this study mainly focused on the prognostic value of LNR in OCCC, since OCCC has a poorer prognosis than other histological subtypes. Thirdly, previous studies did not validate their findings and conclusions using an independent validation cohort.[11-15] In order to strengthen the credibility of our study, two independent patients cohorts were used to assess the prognostic role of LNR, and both patients cohort proved the prognostic value of LNR. However, our findings should be validated in future prospective study.

LNR has a significant impact on PFS and OS and might be used as a predictor of survival in patients with advanced OCCC. However, these findings need to be verified in future prospective studies.

Z.L. and D.N. conceived and designed this study. D.N. and X.M. collected and analyzed the data. D.N. wrote the manuscript. All authors approved the final manuscript.