Bladder cancer is one of the most common cancers among people, which ranks 9th of world cancer and caused 165,100 deaths each year, with male morbidity and mortality 4 times higher than female [1,2]. Non-muscle invasive bladder cancer accounts for approximately 75% of bladder cancer cases and 40% of these patients will progress to muscle invasive with an average of 15 months survival [3,4]. Despite a variety of treatment methods, such as surgery, radiotherapy and chemotherapy, patients with bladder cancer suffer from significant treatment failure, including high rates of recurrence and poor outcomes for advanced disease [5]. Therefore, there is an urgent need for a new treatment for bladder cancer.

CD155, a membrane protein which belongs to the immunoglobulin (Ig) superfamily, has been confirmed to overexpress in several kinds of human malignancies, including lung adenocarcinoma, melanoma, pancreatic cancer and colon cancer [9-14]. CD155 is associated with tumor progression, knockdown of CD155 can inhibit the invasion and migration of glioma cells [15-16]. CD155 down-regulation also inhibited colon cancer cell proliferation, accompanied by the inhibition of colon cancer cell migration and invasion [17]. In spite of the role of CD155 in bladder cancer remains unknown, all of the above indicate that CD155 may become an immunotherapeutic target for bladder cancer.

The human bladder cancer pumc-91 cell line was provided by the Cell Laboratory of Beijing Union Medical College Hospital. The drug-resistant bladder cancer cell line pumc-91/ADM was established by adding the dosage of Adriamycin (Aladdin) gradually and the final concentration of Adriamycin was 1.0 ug/ml [18-21]. The human bladder cancer T24 cell line was provided by the Chinese Academy of Sciences. The drug-resistant bladder cancer cell line T24/DDP was established by stepwise exposure of T24 cells to escalating concentrations of cisplatin (Sigma-Aldrich, St. Louis, MO, USA). The final concentration of cisplatin was 0.6μg / ml [21-22]. The parental cell lines were cultured in RPMI-1640 medium supplemented with 15% fetal bovine serum, while drug-resistant cell lines were cultured in the above-mentioned medium with 18% fetal bovine serum and incubated in an incubator containing 5% carbon dioxide at 37 ° C.

Peripheral blood mononuclear cells (PBMCs) were separated immediately by Ficoll-Hypaque density gradient centrifugation. Blood was obtained from healthy donors which supplied by the Beijing Blood Bank. PBMCs were cultured at 1×106/ ml in RPMI-1640 medium supplemented with 10% FBS and 5 μg/ml anti-CD3 mAb (eBioscience, San Diego, CA, USA) combined with 5 μg/ml anti-CD28 mAb (eBioscience) in the presence of 100 IU/ml recombinant human IL-2 (Peprotech, Rocky Hill, NJ, USA). IL-2 was added every 2 or 3 days to stimulate ATC cells and the cells were cultured for 14 days. On day 14, ATC expansion products of healthy donors were on 98.99% CD3+ cells (2.66% CD3+CD4+ cells, 85.95% CD3+CD8+ T cells, and 16.16% CD3+CD56+T cells), the cells were used immediately or cryopreserved for further use.

1mg/ml of Anti-CD155 mAb (R&D System, Minneapolis, MN, USA) was reacted with 10-fold molar excess of sulfo-SMCC (2 mg/ml) and 1mg/ml of Anti-CD3 (OKT3, eBioscience, San Diego, CA, USA) was reacted with 10-fold molar excess of Traut's reagent (2mg/ml). Both reaction mixtures were incubated for 1 hour at room temperature and removed excess crosslinker using PD-10 column. The anti-CD155-SMCC and anti-CD3-SH were mixed immediately at equimolar ratios and hetero conjugated at 4°C overnight. The products of the hetero conjugation were resolved by SDS-PAGE and stained with Gel code Blue. The concentration was detected by the BCA kit. The coupling rate was calculated by gray scale analysis of western blot using ImageJ software. Cryopreserved ATCs were thawed and armed with CD155Bi-Ab at a concentration of 100 ng/106 cells at room temperature for 30 minutes followed by washing the cells to eliminate unbound antibodies with the combination of OKT3 (100 ng/106 cells) and Anti-CD155-mAb (100ng/106 cells) pre-incubated ATCs using as unarmed control ATCs.

Target cells (T24, T24/DDP, PUMC-91, PUMC-91/ADM) were seeded in triplicate in 96-well u bottom microplates at 1x104/well prior to the addition of Anti-CD155Bi-Ab, unarmed ATC or ATC cells at an effector-to-target (E/T) ratio of 10:1. Effector cells and tumor cells were then interacted at 37°C for 18 hours. Cell free supernatants were collected and cytotoxicity was measured by Lactate dehydrogenase activity kit (Sigma-Aldrich, St.Louis, MO, USA).T24-LUC and T24/DDP-LUC were used as target cells to repeat the above experiment at an effector-to-target (E/T) ratio of 1:1,5:1and 20:1.Luciferase quantitative assay [23-27] in which bioluminescence imaging signal in tumor cells expressed in photons per second was converted into living cell number, and the cytotoxicity assays were calculated.

The cell free supernatants were collected as described above, and the IFN-γ, TNF-α productions were detected by the human cytokine ELISA kits (eBioscience) according to the manufacturer's instructions.

Peripheral blood mononuclear cells (PBMCs) from bladder cancer patients were separated immediately by Ficoll-Hypaque density gradient centrifugation. ATCs were cultured and armed CD155Bi-Ab in the same manner as described above. The killing effect was proved by cytotoxicity assay, ELISA assay and Flow cytometric analysis as described above. 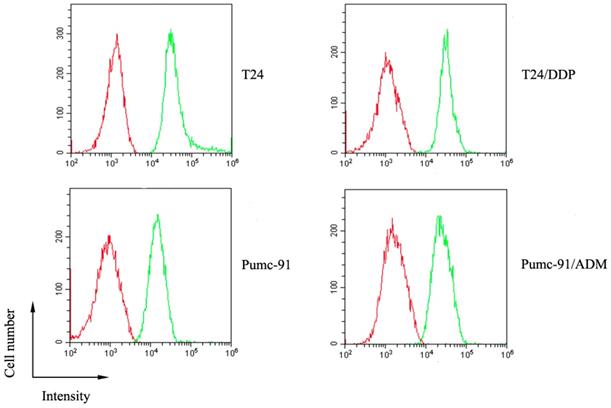 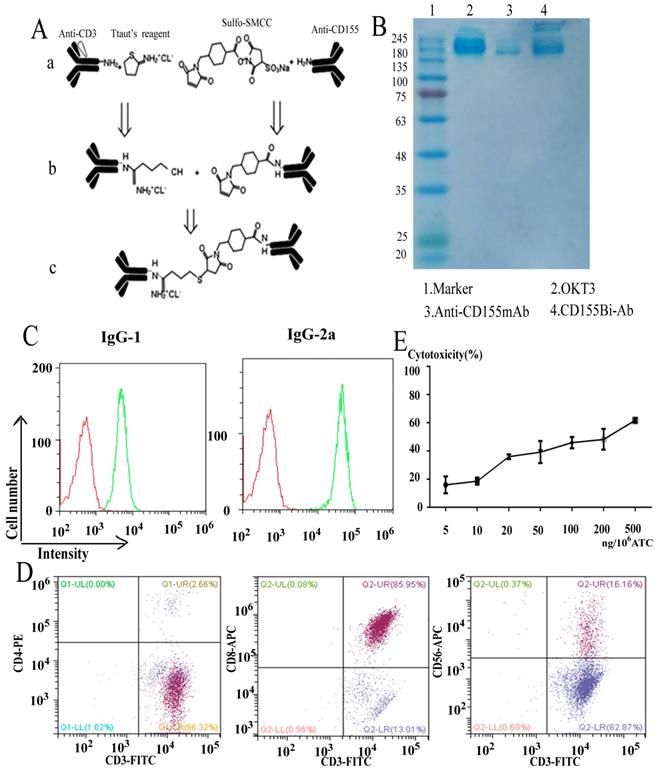 Characterization of CD155Bi-Ab and preparation of ATCs

The bispecific antibody CD155Bi-Ab which could recognize both CD3 on T cells and CD155 on bladder cancer cells was hetero-conjugated by Anti-human CD155 mAb and OKT3. The equimolar concentrations of binding product were detected by Coomassie blue. The coupling rate which calculated by ImageJ software is 17%. Pmuc-91/ADM and ATC were stained with CD155Bi-Ab or a combination of OKT3 and anti-human CD155 mAb. Anti-mouse IgG2a-PE was identificated the CD3 moiety of CD155Bi-Ab and anti-mouse IgG1-PE was identificated the CD155 moiety of CD155Bi-Ab.

For the purpose of considerable effective ATCs, PBMCs isolated from peripheral blood of healthy people were stimulated with anti-CD3 mAb and anti-CD28mAb.IL-2 was added to the media every 2 days. On day 14, the molecular expressions of ATCs were detected by FACS analysis. As Figure 2C shows, the cells contained about 99% CD3+ cells, in which there were 85.95% CD3+CD8+ ,2.66% CD3+CD4+ and 16.16% CD3+CD56+ cells. In a word, the above data illustrate that cells mainly consist of ATCs and a small part of NK cells.

To determine the optimal concentration of CD155Bi-Ab, ATC was armed with CD155Bi-Ab ranging from 5 to 500 ng/106 cells, and cytotoxic effects of CD155Bi-armed ATC on T24/DDP-luc cells were detected. After one-night incubation of CD155 Bi-armed ATCs with T24/DDP-luc cells, the percentage of viability was almost 46% at the concentration of 100 ng CD155Bi-Ab/106 cells at effector-to-target (E/T) ratio of 10:1.

On account of the concentration of 100ng/106 ATC has shown great kill effect, it was chose as the concentration of CD155Bi-Ab for all the subsequent experiments. ATC mixed with OKT3 and anti-CD155 mAb were used as unarmed ATC controls. Effect cells and target cells were interacted at a ratio of 10:1 at 37 ° C for one night. Real-time photographs of each bladder cancer group were taken at × 200 magnification. The supernatants of co-cultures were collected, with lactate dehydrogenase activity kit used to determine the cytotoxicity. Moreover, effect cells were interacted with stable bladder cancer cell line T24 and cisplatin resistant cell line T24/DDP that expressed luciferase reporter at different ratios (1:1, 5:1and 20:1) and the cytotoxicity were calculated. As Figure 3C shows, fluorescence in CD155Bi-Ab-ATC cell was less than unarmed ATC counterparts, indicating CD155Bi-Ab-ATC has efficacious killing effects on bladder cancer cells.

For the purpose of analyze cytokines generating from ATCs, supernatants were collected for the analyses of IFN-γ, TNF-α productions at E/T ratio of 10:1. Obviously, CD155Bi-Ab-ATCs secret higher level of IFN-γ, TNF-α than other control groups.

To confirm whether CD155Bi-Ab can effectively target the patients with bladder cancer, ATC isolated from the peripheral blood of bladder cancer patients were armed with CD155Bi-Ab and the above experiment was repeated. As Figure 5A shows, the cells contained about 92% CD3+ cells, in which there were 54.46% CD3+CD8+ ,30.27% CD3+CD4+ and 24.56% CD3+CD56+ cells. Real-time photographs of each bladder cancer group which armed with ATC, unarmed ATC and CD155Bi-Ab ATC respectively were taken at × 200 magnification (Figure 5B). Significant increases were detected in LDH activity (Figure 5C) secretion in CD155Bi-Ab-ATC compared with their unarmed ATC counterpart when ATC were co-cultured with T24, T24/DDP, Pumc-91, Pumc-91/ADM. Increased CD69 expression on CD155Bi-Ab-ATC over their unarmed ATC after incubation with bladder cancer cells were detected by FACS (Figure 5D). CD69, an early activation marker of lymphocytes, plays the significant role in immune responses.

Cytotoxity effects of CD155Bi-Ab-armed ATC on human bladder cancer cells. (A) Supernatants were harvested and analyzed for cytokine levels by lactate dehydrogenase kit. (B) Bioluminescence images of T24-luc cells and T24/DDP-luc cells cultured with CD155Bi-Ab-ATC or unarmed ATC cells at the E/T ratio of 1:1, 5:1 and 20:1. (C). Cytotoxicity assays were calculated. 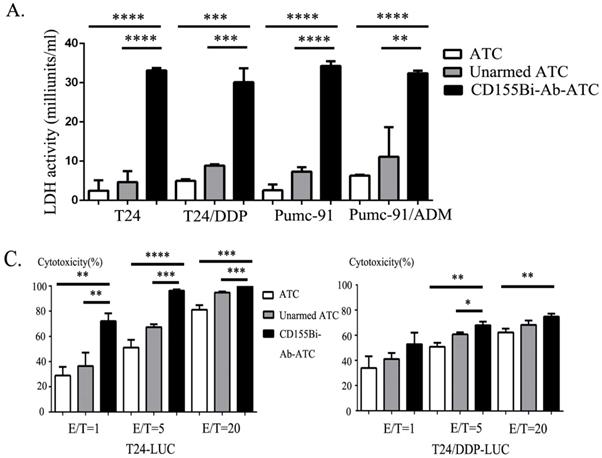 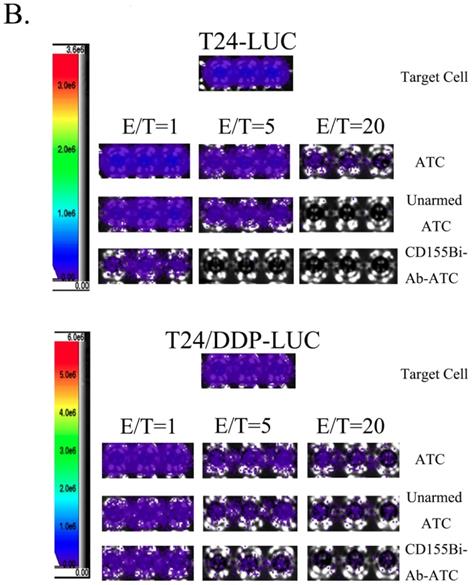 The secretion of TNF-α(A), IFN-γ (B) by CD155Bi-Ab-ATCs against human bladder cancer cells. Supernatants of co-cultures were collected as previously described and analyzed by ELISA kits. 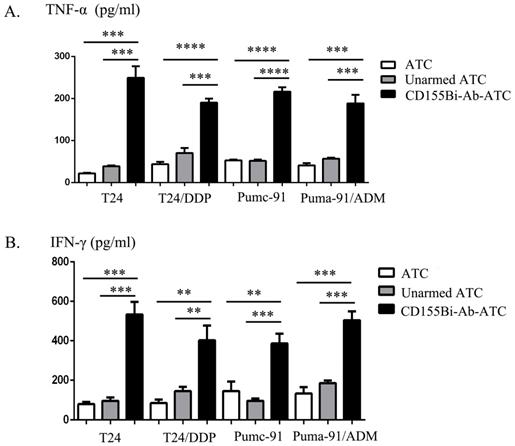 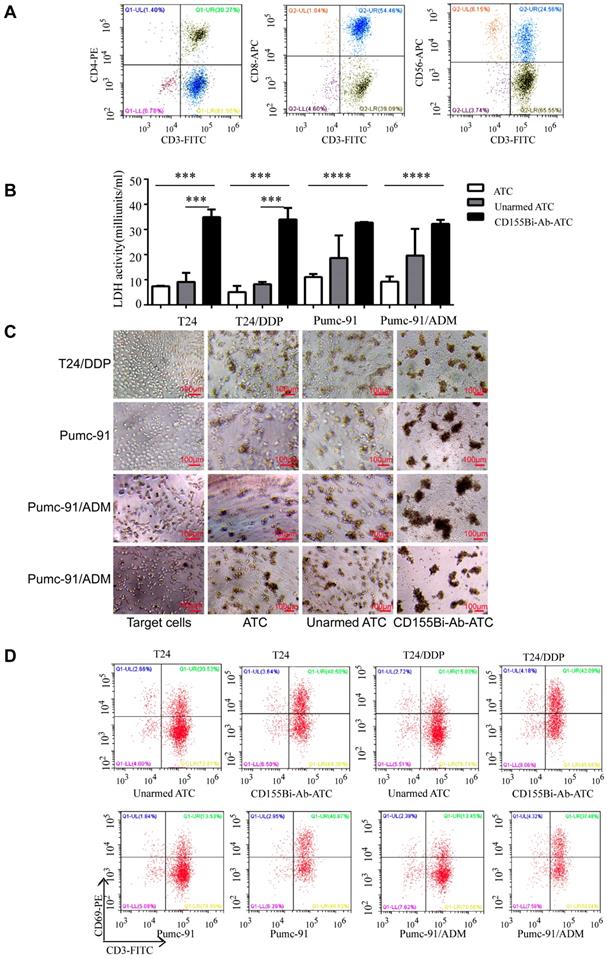 Bladder cancer is one of the common malignant tumors of the urinary system, with multidrug resistance existed as a serious problem. Due to its safety and efficacy, immunity therapy is recognized as the fourth treatment in tumor comprehensive therapy strategy in the twenty-first century [28], especially the application of BiAbs. BiAbs are a bridge that links the immune lymphocyte and cancer cells, inspiring achievements in tumor immunotherapy.

CD155, an immunoglobulin-like adhesion molecule, has been proved upregulated in a series of human malignancies, such as colon cancer, lung adenocarcinoma, melanoma, pancreatic cancer and glioblastoma [12, 29-32]. Research has shown that CD155 plays critical roles in tumor cell invasion and migration [32-34]. In reviewing the literature, no date was found on the association between CD155 and bladder cancer. To our knowledge, our study represents the first to examine the intersection of CD155 and bladder cancer.

In this study, we found CD155 is highly expressed on human bladder cancer cells and their chemotherapeutic drug-resistant counterparts. We further tested whether CD155 was an effective target for the immunity therapy in bladder cancer, and evaluated antitumor effects of CD155Bi-Ab-armed ATCs. The results of this study show that compared with control unarmed ATCs, CD155Bi-Ab-armed ATCs secreted more IFN-γ and TNF-α. These increased cytokines generated by activated T cells mediated antitumor activity by activating endogenous immune cells in vivo and participated in immune regulation to induce local or systemic immune responses to tumors [35]. Microscope images clearly showed CD155Bi-Ab-armed ATCs are activated and gathered around target cells. The supernatants CD155Bi-Ab-armed ATCs cultured with target cells were detected more LDH than control groups. Another method for verifying the killing effect is bioluminescent image that clearly showed fluorescence in CD155Bi-Ab-ATCs was less than that in their unarmed ATC counterparts. The above results showed that T-cell cytotoxicity was played on the engagement of CD155 via Bi-Ab linkage.

Our data lend additional support to the CD155 is an immunotherapy target for CD155-positive bladder cancer. Next we will further conduct animal experiments for in vivo studies and preclinical studies to verify the antitumor activity of CD155Bi-Ab.