Background: The Aldehyde dehydrogenase 2 (ALDH2) mutant genotypes contain an allele encoding defective ALDH2 with reduced efficacy of alcohol metabolism leading to accumulation of highly toxic and carcinogenic acetaldehyde. It can induce unpleasant “Asian flush syndrome” and associate with increased risk of cancers. However, to date, little is known about ALDH2 genotypes in relation to the postoperative prognosis of hepatocellular carcinoma (HCC).

Methods: From 2002 to 2012, 419 HCC patients receiving surgical resection of HCC were enrolled for ALDH2-rs671 genotyping and outcome correlation.

Hepatocellular carcinoma (HCC), the major histological subtype of primary liver cancer, ranks the fifth most commonly diagnosed solid cancer in men and the seventh in women as well as the third leading cause of cancer-related death worldwide [1]. HCC is a multifactorial disease. Hepatitis B virus, hepatitis C virus, and alcohol consumption have been considered the three most important etiologic factors for HCC [2-5]. There are several potentially curative treatments for early-stage HCC, including surgical resection, radiofrequency ablation therapies, and liver transplantation [6-9]. Patients treated at an early stage can usually achieve complete remission. However, a large proportion of them suffers from subsequent cancer recurrence and distant metastasis, of whom HCC often progresses rapidly into intermediate or advanced stages. For patients who are diagnosed at unresectable stages, palliative treatments are recommended, including transcatheter arterial chemoembolization, radiotherapy, chemotherapy, targeted therapy, and immune therapy [10-12]. Although the therapeutic outcome has improved remarkably in recent years, the prognosis of advanced HCC remains grave. Therefore, it is pivotal to identify postoperative prognosis factors so that researchers could devise novel adjuvant treatments to reduce the recurrence rate in selected groups of patients.

Alcohol is oxidized to acetaldehyde by alcohol dehydrogenase, which in turn is oxidized to acetate by aldehyde dehydrogenase. The aldehyde dehydrogenase 2 gene (ALDH2), encodes a mitochondrial enzyme, which is the key enzyme responsible for alcohol metabolism. It contains two alternative alleles (rs617 - “G” or “A”) correlated with differential efficacy of alcohol metabolism [13, 14]. Individuals heterozygous or homozygous for the lysine encoding (named “A” or *2) allele at the single nucleotide polymorphism (SNP) glu504lys (rs671) of ALDH2 have an enzyme possessing greatly reduced ability to metabolize acetaldehyde, which can reach to as low as 17-50% of the wild type. These individuals accumulate acetaldehyde when consuming alcohol, suffer from alcohol intolerance symptoms, but therefore carry a decreased risk for alcohol dependence [15]. Of note is that about 40% of the Eastern Asian populations carry the mutation phenotype [16]. Additionally, it is well known that acetaldehyde, rather than ethanol, is highly toxic, carcinogenic, and mutagenic, and has been determined as the cause of “Asian flush syndrome” - unpleasant symptoms after alcohol intake with nausea, facial flushing, muscle weakness, tachycardia, palpitation, perspiration, headache, and sleepiness [17]. Furthermore, a recent review proposed that the differential ALDH2 expression may dedicate to a wide variety of human diseases, including cardiovascular diseases, diabetes, and cancers [18]. However, the role of ALDH2 genotype in the disease progression and the postoperative prognosis of HCC remains largely unstudied.

In the present study, we aimed to investigate whether the ALDH2 genotype associated with the postoperative outcome of HCC.

Alcoholism in this study was defined as documented daily alcohol consumption > 40 g/day for males or > 20 g/day for female, over a period of > 10 years, combined with psychological and physical dependence.

Genotyping of the ALDH2-rs671 SNP was performed on genomic DNA extracted from the liver tissues (para-neoplastic, non-cancerous parts) using QIAamp DNA Mini kits (Qiagen, Düsseldorf, Germany). Primers were designed to amplify the region of ALDH2 gene containing the variant rs671. To ensure that specific amplicons were correctly amplified, nested PCR was carried out by using primers: (a) 5′- TAAAGACTTTGGGGCAATACAGG -3′, (b) 5′- CCCAGCAAATGACCGCATA -3′, (c) 5′- AAGAGTGATTTCTGCAATCTCG -3′, and (d) 5′-CCTCAGTATTTCTCATGGGAC -3′. The first amplification reaction mixture contained DNA (5 µl), the primers (a) and (b) (10 µM; 0.25 µl each), the Taq DNA pol 2.0 master mix red (containing 1.5 mM MgCl2; 25 µl; Amplicon, Glostrup, Denmark) and double-distilled water (19.5 µl). Temperature for the PCR procedure was set at 95° C for an initial denaturation of 5 min, followed by 35 cycles of denaturation-annealing-extension procedure at 94° C, 580 C and 72° C, respectively, holding denaturation and annealing temperature for 1 min and extension temperature for 3 min in a cycle. The procedure was then followed by a final extension with a temperature of 72°C for 10 min. Then, 5 μl of the first PCR products were used for amplification with the nested primers (c) and (d) for 35 cycles (94°C for 1 minute, 55°C for 1 minute, and 72°C for 1 minute). An aliquot of water was included for parallel PCR amplification in each batch, as a negative control. Finally, conventional Sanger sequencing was performed for direct sequence reads of ALDH2 genotype.

Dichotomized data was expressed as numbers and ratios (%) and compared by use of Chi-square test or Fisher's exact tests, where appropriate. Parametric data was expressed as mean ± standard deviation and compared by use of two-sample t-test or the Mann-Whitney U-test, where appropriate. Overall survival was calculated from the date of surgery to the date of death or last follow-up. Time to recurrence or distant metastasis was calculated from the date of surgery to the date of recurrence or distant metastasis, respectively. Univariate and multivariate Cox proportional hazard models were used to estimate survivals for clinicopathological and genotypic variables. In this study, significant factors identified from univariate analysis were included for multivariate Cox proportional hazards. The Kaplan-Meier method was used to estimate the survival probability between the different genotype groups, and the log-rank test was used to compare the survivals. All tests were two-tailed, and a P < 0.05 was considered statistically significant. All statistical analyses were performed using Statistical Package for the Social Sciences (SPSS) statistics Version 20 (SPSS, Chicago, IL, USA).

Of the 419 patients included, 202 were ALDH2 “GG” genotype. Their basic clinicopathological and genotypic characteristics were summarized in Table 1. Notably, the etiological analysis showed 111 (26.5%) were alcoholism, 303 (72.3%) were HBsAg-positive, and 101 (24.1%) were anti-HCV-positive. Patients with more than one etiological factor were not uncommon.

A detailed comparison of all clinicopathological features between HCC patients carrying ALDH2 “GG” and “non-GG” (“AA” + “GA”) genotype was shown in Table 2. In summary, patients with the “GG” genotype were significantly associated with alcoholism (35.6% versus 18%; P < 0.001). No significant differences were observed for other clinicopathological variables. Strikingly, even under the strict definition of alcoholism (see Methods), there remained 18% of our patients with “non-GG” or mutant genotypes having alcoholism. 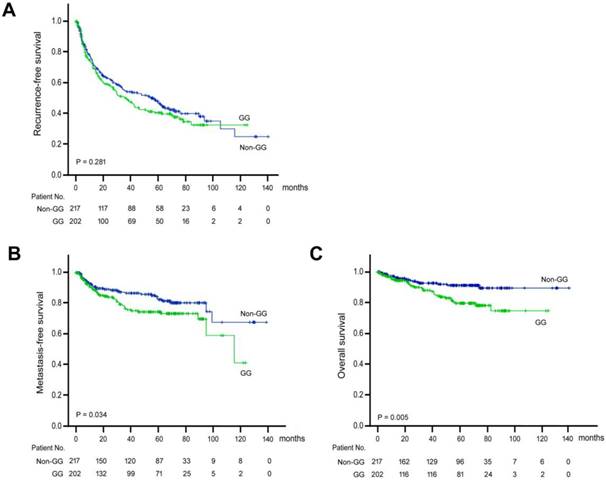 Similarly, it was found that patients with female gender, HBsAg-negative, non-liver cirrhosis, Edmonson's histology grading 1-2, tumor number = 1, absence of microvascular or macrovascular invasion, or AST > ALT, “GG” genotype was significantly associated with shorter metastasis-free (Figure 3). No subgroups were identified, where the “GG” genotype was associated with recurrence-free survival (Figure 4). 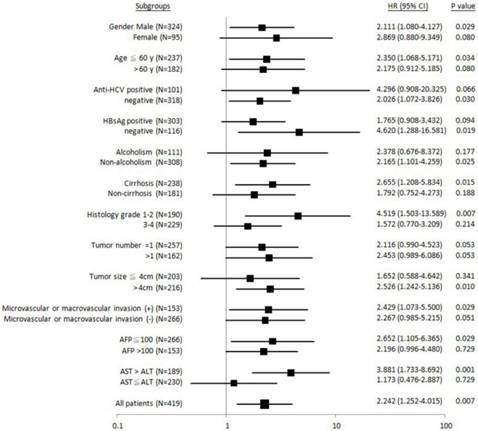 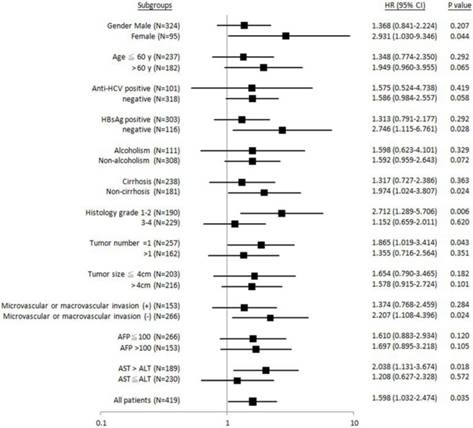 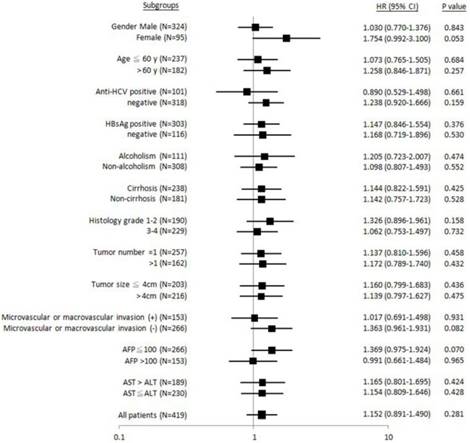 In the present study, we aimed to investigate the association between ALDH2 genotype and postoperative prognosis of HCC. Several interesting observations were made. Despite the low prevalence of alcoholism found in our HCC patients, the data still demonstrated that the wild genotype of ALDH2-“GG” was strongly associated with alcoholism, consistent with our current knowledge regarding ALDH2. Surprisingly, patients with ALDH2-“GG” genotype, who should have a more efficient alcohol metabolic enzyme, had significant shorter metastasis-free and overall survival, as compared with those with mutant genotypes ALDH2-“AA” or “GA”. We were initially puzzled by this seemingly contradictory result. However, after subgroup analysis was performed, it was found that in patients with HBsAg-negative, low histology grade and AST > ALT, the predictive value of ALDH2 genotpye was consistent for distant metastasis and overall survival. Patients with these characteristics were those having a heavy alcoholic intake, but not necessarily reaching alcoholism (with psychological and physical dependence). In Taiwan and many Asian countries, heavy alcohol drinking maybe needed on social occasions but not necessarily developed into a drinking habit. Most of these patients had AST > ALT and negative HBsAg. When diagnosed as HCC, patients with ALDH2-“AA” or “GA” genotype could easily abstain from the social-occasion-associated alcohol drinking (because of intolerance), whereas patients with ALDH2-“GG” were less likely to abstain themselves, partly because of established alcoholic addiction (alcoholism, see Table 2). As a result, ALDH2-“GG” was associated with an unfavorable prognosis.

Viral hepatitis plays a predominant role in the etiology and prognosis of HCC because of the high prevalence rate of chronic HBV or HCV infection in Asia [2, 4, 19]. Fortunately, the prevalence of chronic HBV infection is declining due to the implementation of HBV vaccination programs [20]. In addition, potent antiviral agents have been developed and widely applied for the treatment of viral hepatitis [21, 22]. But as the number of alcoholic patients increases, the impact of alcohol and its metabolic genes on HCC development required more attention. In our patients included, the prevalence of HBV and HCV was high, 72.3% of HBsAg-positive and 24.1% of anti-HCV-positive. However, when Cox proportion hazard model was used to determine predictors for distant metastasis or overall survival, viral hepatitis and alcoholism were found to have no predictive effect. On the other hand, ALDH2 “GG” genotype and AST elevation (suggesting heavy alcohol drinking but not necessarily alcoholism) were significantly outcome predictors. Out results argued that after HCC had developed, forced abstention from alcohol was needed for patients with ALDH2 “GG” genotype.

Many previous studies have focused on the relationship between HCC occurrence and ALDH2 genotype, and the results are inconsistent. The mutant genotype of ALDH2 may have direct or indirect impacts to be implicated in the development of HCC, whether or not it is combined with viral hepatitis or alcohol ingestion [23, 24]. On the other hand, some reports indicated that ALDH2 mutant genotype may instead have protective effect, while ALDH2 wild genotype serves as a predictor for HCC development [7, 25]. However, there are still other reports suggested that ALDH2 mutant genotype has only limited (not statistically significant) contribution for the risk of HCC [26, 27]. To the best of our knowledge, the present study differs from previous studies as it is the first attempt to identify ALDH2 genotype as an effective predictor for postoperative prognosis in HCC, but not as a risk factor for HCC development. Importantly, wild type ALDH2 can effectively metabolize alcohol and thus less likely to accumulate carcinogenic acetaldehyde. Therefore, one would expect that ALDH2 wild type should be associated with a better postoperative prognosis. However, our data argued against this view. According to our subgroup analysis, we believed that both ALDH2 genotypes and changes of drinking behavior after HCC resection were important determinants for postoperative prognosis (with the latter more important). As such, in patients receiving HCC surgical treatment, it is recommended to check the ALDH2 genotype and to give alcohol abstinence order to those with wild type ALDH2-“GG”.

In order to further decipher our findings, we had conducted a small-scale validation study in which 87 adult patients were enrolled, who were diagnosed as HCC and received curative radiofrequency ablation therapies owing to unsuitable for operation (with more advanced stages of cirrhosis). Of the 87 patients included, 45 (51.7%) were ALDH2-“GG” (wild type). Compared to the “non-GG” mutant genotype, the HCC recurrence incidence of the “GG” genotype was borderline significantly higher (76.6% vs. 57.1%; P = 0.069). However, the “GG” genotype demonstrated no significantly difference for the incidence of distant metastasis and overall survival, albeit numerically higher (28.9% vs 23.8%; P = 0.591; 48.9% vs 45.2%; P = 0.733, respectively). Taken together, despite that these patients were in a more advanced stage of cirrhosis, ALDH2-“GG” (wild type) still associated with a poorer prognosis (higher recurrence).

In conclusion, we have discovered that ALDH2 “GG” genotype is an independent predictor for shorter overall survival and metastasis-free survival in HCC patients treated by surgical resection.

15. Zakhari S, Li TK. Determinants of alcohol use and abuse: Impact of quantity and frequency patterns on liver disease. Hepatology. 2007;46:2032-9