Background The benefit of surgical resection for advanced gastrointestinal stromal tumors (GISTs) following tyrosine kinase inhibitors (TKIs) treatment was still under debate. The present meta-analysis was designed to assess the value of surgical resection for the prognosis of patients with metastatic, recurrence and unresectable GISTs. Methods A systematic search of PubMed Central, PubMed, EMBASE and the Cochrane Library database was performed. Relevant studies of the role of surgery in advanced GISTs published before 1 May 2019 were identified. The quality of studies was assessed by the Newcastle-Ottawa Quality Assessment Scale. The progression-free survival (PFS) and overall survival (OS) were assessed through software Stata 15.0. Results A total of 6 retrospective studies including 655 patients were analyzed. The pooled result revealed that surgical resection group was associated with better PFS (HR = 2.08; 95% CI: 1.58 to 2.76; P<0.001) and better OS (HR = 2.13; 95% CI: 1.59 to 2.85; P<0.001) compared with TKIs treatment alone group. Conclusions Surgical resection following TKIs treatment could significantly improve the prognosis of patients with advanced GISTs.

GISTs are the commonest mesenchymal tumors of the gastrointestinal tract, with an incidence range from 6.8 to 19.7 per million [1-3]. GISTs can arise anywhere within the gastrointestinal tract but most commonly in the stomach, followed by small intestine [4, 5]. Approximately 85% of GISTs harbor a gain-of-function mutation in either KIT or platelet-derived growth factor receptor alpha (PDGFRA) genes [6-8]. GISTs could display a broad spectrum of clinical behavior, from benign to malignant [9].

For localized GISTs, complete resection remains the standard treatment, and surgery combination with TKIs treatment could significantly improve survival of patients. However, approximately 30% to 50% of patients will suffer from recurrence or metastasis within 3 years in absence of TKIs therapy [10-12]. Moreover, up to 50% of GISTs are metastatic or unresectable at the time of diagnosis[4, 13]. For these patients, imatinib was considered as first line treatment. The induction of imatinib has significantly improved the survival of patients with metastatic, recurrent and unresectable GISTs[14-16]. However, approximately 15% of patients were primarily resistant to imatinib treatment[17, 18]. Although up to 80% of patients were initially responsive to imatinib treatment, most patients will develop secondary resistance resulting from secondary mutations within 2 years[19, 20]. In addition, approximately 20% of patients do not tolerate TKIs treatment[21-23]. Thus, surgical resection may be an additional option for metastatic, recurrent or unresectable GISTs, as it could decrease the tumor burden of patients. Over the last two decades, a series of studies[24-28] have demonstrated that surgical resection could improve the clinical outcomes of patients with advanced GISTs following TKIs therapy. Nevertheless, conflicting data has also been reported[29].

Therefore, the present study aims to investigate the clinical benefits of surgical resection following TKIs treatment for patients with metastatic, recurrent or unresectable GISTs through a systematic review and meta-analysis.

Two reviewers (GYH and LJQ) independently assessed the studies using the following inclusion criteria: (1) Diagnosed as recurrent, metastatic or unresectable GISTs; (2) The studies contain two groups: surgical resection group (S group) and TKIs treatment alone group (NS group); (3) In S group, surgical resection should be performed following TKIs treatment; (4) The informative data were available; and (5) Published in English. Disagreements were settled by consultation or adjudicated by a third reviewer (WF). Titles and abstracts were used to screen for initial study inclusion. Full-text review was performed when abstracts were insufficient to determine if the study met inclusion criteria or not.

The quality of the included papers was assessed using the Newcastle-Ottawa Quality Assessment Scale (NOS) [30]. The risk of bias was deemed to be high if a study scored 0-3, moderate if it scored 4-6 and low if it scored 7-9.

This meta-analysis was performed according to the Preferred Reporting Items for Systematic Reviews and Meta-Analyses (PRISMA) guidelines[31] (Supplementary Table S1). The primary outcomes were progression-free survival (PFS) and overall survival (OS). Hazard ratio (HR) and 95% confidence intervals (CIs) were used to analysis time-to-event outcomes, if not reported, we derived HR and 95% CIs based on data reconstructed from Kaplan-Meier survival curves reported by Tierney et al[32]. The surgical resection group was settled as “reference” group. A HR >1 indicated a worse prognosis in patients with advanced GISTs. Heterogeneity were estimated using the I2 statistic and the Cochrane Q test[33]. An I2 statistic was interpreted to reflect low heterogeneity (0%-25%), moderate heterogeneity (26%-75%), and high heterogeneity (76%-100%), as was a P value of less than or equal to 0.05 for heterogeneity. Where there was a moderate or high likelihood of heterogeneity, sensitivity analyses were done to seek the reasons for the differences. The fixed-effect model was first fitted for all outcomes, if the p value of the heterogeneity Q test was greater than 0.1 (I2≤40), the random effects model was used.

A total of 36270 studies (PubMed Central, n=27096; PubMed, n=2841; EMBASE, n=6133; Cochrane library, n=200) were identified using our search strategy, of which six retrospective studies[36-41] were included in this meta-analysis. A flow chart of the search strategy and reasons for exclusion are illustrated in Figure 1.

The 6 studies enrolled 655 patients, of which 239 patients underwent surgery following TKIs therapy and 416 patients underwent TKIs treatment alone. The publication year ranged from 2005 to 2018. The recruitment time was between 2001 and 2016. Characteristics of the included studies were provided in Table 1 (Supplementary Table S2). 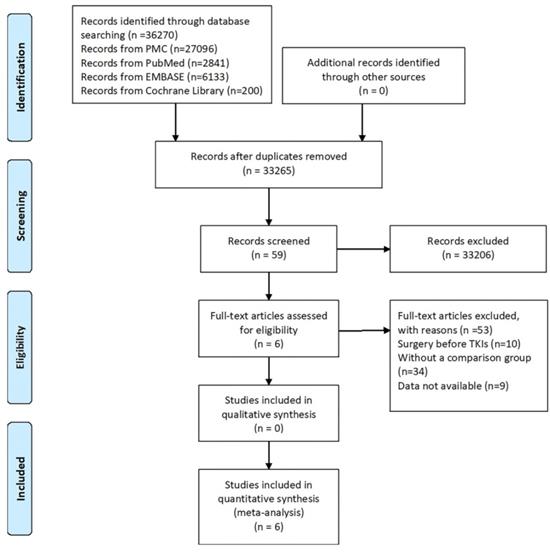 Meta-analysis of PFS between S group and NS group. PFS=progression-free survival, HR=hazard ratio, CI=confidence interval, I-squared=the percentage of total variation across studies that is due to heterogeneity rather than chance. 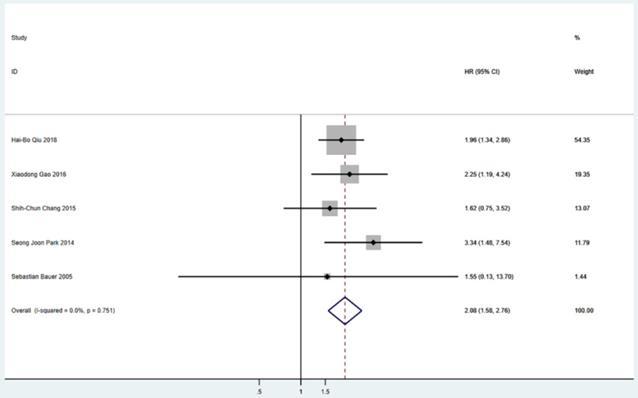 Summary of studies included in the meta-analysis

Meta-analysis of OS between S group and NS group. OS=overall survival, HR=hazard ratio, CI=confidence interval, I-squared=the percentage of total variation across studies that is due to heterogeneity rather than chance. 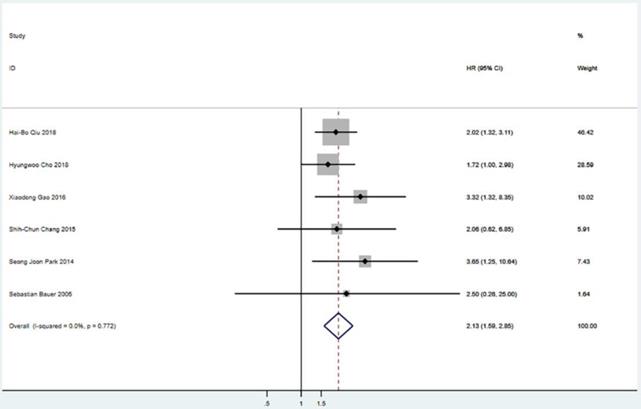 Despite most GISTs patients initially benefit from TKIs therapy, secondary resistance occurs at a median time of 2 years, which result in poor prognosis. Therefore, surgical resection for advanced GISTs is thought to be an additional therapy to remove residual tumor or drug resistant clones to induce remission or curation. However, the value of surgical resection for this situation was still under debate. Thus, the present meta-analysis was performed to evaluate the value of surgical resection for the prognosis of patients with metastatic, recurrent, or unresectable GISTs. Our pooled analysis demonstrated that GIST patients who treated with surgery following TKIs therapy showed better clinical outcomes in terms of PFS and OS compared with that received TKIs therapy alone. 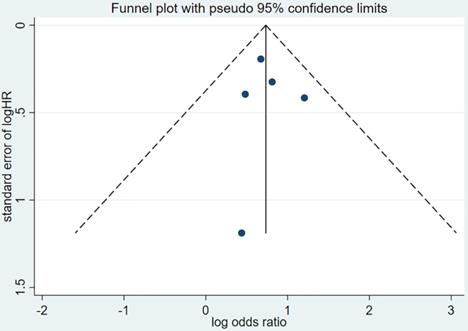 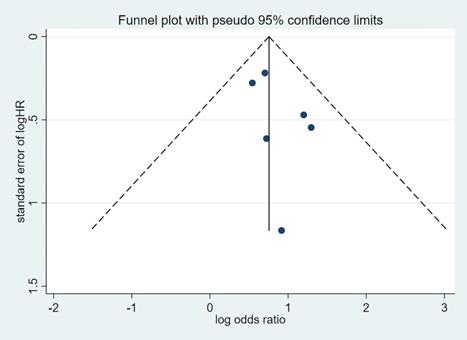 The timing of surgery was also very important. The European Society for Medical Oncology (ESMO) practical guidelines[45] suggested that surgery should be performed at the time of maximal tumor response, generally 6-12 months after TKIs treatment for localized GISTs. However, optimal timing of surgery for advanced GISTs was still hard to ascertain. Keung et al.[46] recommended that cytoreductive surgery of residual metastatic disease should be considered no earlier than 6 months and no later than 2 years after TKIs initiation. Bischof et al. [47]suggested that patients with partial response (PR) and stable disease (SD) treated with TKIs therapy and surgery showed significantly prolonged PFS and OS compared with those with progressive disease (PD). Qiu et al.[36] also reported the similar results. These findings indicated that PR and SD may be the proper time for cytoreductive surgery. Although the prognosis of patients with PD receiving cytoreductive surgery was not satisfactory, no study has compared the survival of patients with PD between surgical treatment and TKIs treatment alone. Thus, selection of optimal candidates for cytoreductive surgery is also very difficult in clinical practice.

It is well known that type of gene mutation was associated with the prognosis of GIST patients[48, 49]. However, the impact of gene mutational status on the clinical outcomes of cytoreductive surgery is still unknown. Qiu et al.[36] reported that patients with primary c-KIT exon 11 rather than exon 9 mutation could benefit from cytoreduction surgery. Result of Park et al. [39] revealed that c-Kit exon 11 rather than exon 9 or wild-type was associated with longer PFS in the surgery group.

So far, there was only one meta-analysis evaluated the role of surgery in patients with advanced GIST, which included 9 studies with 1416 patients. The pooled results revealed that surgery combined with TKIs therapy is associated with a better OS and PFS. However, patients in 4 studies included in this meta-analysis received surgery prior to imatinib therapy, which may result in bias and finally influence the evaluation of value of surgery in advanced GISTs patients. Because cytoreductive surgery before imatinib treatment for advanced GISTs patients was not recommended in the NCCN and ESMO guidelines[45, 50]. Therefore, our present meta-analysis strictly limited the inclusion criteria and updated the relevant literatures.

There are several limitations in our study. First, the sample size was relatively small; only six retrospective studies were analyzed. Second, the essential selection bias of the non-randomized and retrospective studies may result in incomparability between the two groups. For instance, the baseline characteristics in some studies were not homogeneous especially in physical condition, metastatic site, tumor size and number of metastases. Third, subgroup analysis concerning R2 resection, timing of surgery, and type of gene mutation, etc. was not performed due to data insufficiency in the included studies. To overcome these limitations, prospective randomized controlled trials based on large populations should be conducted.

In conclusion, this meta-analysis has demonstrated that surgical resection following TKIs therapy could prolong survival of patients with metastatic, recurrent or unresectable GISTs when compared with TKIs therapy alone. Cytoreductive surgery could be considered for selected advanced GIST patients after TKIs therapy.

GYH and LJQ screened and identified the search findings for potential eligible studies. Disagreements were settled by WF, ZGZ and LSS independently extracted the data from each included study. LX and WQ performed the statistical analyses and gave an interpretation of the results. GYH wrote the manuscript. ZHW and FF conceived, designed, supervised the study, and revised the manuscript. All authors read and approved the final version of the manuscript.

All relevant data used and/or analyzed during the current study are available from the corresponding author on reasonable request.

26. Mussi C, Ronellenfitsch U, Jakob J. et al. Post-imatinib surgery in advanced/metastatic GIST: is it worthwhile in all patients?. Annals of oncology: official journal of the European Society for Medical Oncology. 2010;21(2):403-408

30. Stang A. Critical evaluation of the Newcastle-Ottawa scale for the assessment of the quality of nonrandomized studies in meta-analyses. European journal of epidemiology. 2010;25(9):603-605