Methods: Eighty patients with PTCL who underwent pretreatment 18F-PET/CT were enrolled in this study. WBMTV and WBTLG were computed by using the margin threshold of SUV>3.0. WBSUVmax was obtained by summing of SUVmax of the whole-body SUVmax of 11 nodal and 10 extra-nodal lesions.

Results: Median SUVmax was 13.8 (range, 4.6-35.5), median WBSUVmax was 24.6 (range, 4.6-153.4), median WBMTV was 149 cm3 (range, 4-4545 cm3) and median WBTLG was 1017 (range, 16.5-23739). Six patients with anaplastic large cell lymphoma, ALK positive were excluded in the following statistical analysis for their unique pathological types and good prognosis. The receiver operating curve (ROC) analysis showed that the optimal cut-off values of WBSUVmax, WBMTV and WBTLG with overall survival (OS) were 22.2, 169.5 cm3 and 746.1, respectively. Patients with high WBSUVmax, WBMTV and WBTLG had a poor prognosis. WBSUVmax, WBMTV and WBTLG were associated with international prognostic index (IPI) and prognostic index for T-cell lymphoma (PIT). In multivariate analysis, WBTLG and PIT were independent prognostic factors of both progression free survival (PFS) and OS.

Conclusions: Our study shows that high WBTLG, WBMTV and WBSUVmax could predict a relatively poor prognosis, and has a highly significant association with PIT and IPI.WBTLG could be an independent predictive factor for survival outcomes in patients with PTCL.

In recent years, a great deal of research evidences has supported the role of 18F-fluorodeoxyglucose positron emission tomography-computed tomography (18F-FDG PET/CT) in staging and response assessments of NHL. The prognostic value of 18F-FDG PET/CT quantitative parameters such as maximum standard uptake value (SUVmax), whole body metabolic tumor volume (WBMTV) and whole body total lesion glycolysis (WBTLG) have also been demonstrated in several studies. One study in South Korea suggested that high WBTLG was a better predictive factor for poor survival outcomes compared with IPI in diffuse large B-cell lymphoma (DLBCL) [7]. WBSUVmax, a new prognostic model developed by our institution could also be a good predictor of the prognosis in ENKTL [8].However, to our knowledge, few studies have focused on the prognostic value of 18F-FDG PET/CT quantitative parameters in PTCL. This study is aimed to investigate the prognostic value of PET/CT baseline quantitative parameters including SUVmax, WBSUVmax, WBMTV and WBTLG in patients with PTCL.

From January 2008 to May 2016, 80 patients with PTCL were enrolled in this study. Inclusion criteria were as follows: histologically confirmed PTCL including PTCL-NOS, AITL, ALCL and EATL; anthracycline-based regimen as first-line chemotherapy; PET/CT as initial evaluation. Patients with central nervous system involvement were excluded from this study.

Non-normal distribution data were described by median (range). The difference between the PET/CT quantitative parameters in the progression/non progression and survival/death subgroups was analyzed by Mann-Whitney U test. The optimal cut-off values for the PET/CT quantitative parameters were obtained by use of the receiver operating curve (ROC) analysis for OS. Differences between subgroups according to clinical characteristics were analyzed by Pearson χ2 test or Fisher exact test. Kaplan-Meier survival curve was used to estimate PFS and OS. Cox proportional hazards regression model were employed in multivariate analyses. Statistical analyses were done with software package SPSS 16.0. P <0.05 (two-sided) were considered statistically significant.

Clinical characteristics of patients are outlined in Table 1. 80 patients were enrolled in our study, including 29 patients with PTCL-NOS, 33 with AITL, 12with ALCL (6 with ALK positive) and 6 with EATL. The median age was 58 years (range, 17-89) and 44 patients were male. Seventy patients were presented with Ann Arbor stage III-IV, accounting for 87.5% of the total. Forty-nine patients had B symptoms. Sixteen patients had more than one extranodal site. Sixteen patients had a positive bone marrow biopsy. Forty-four patients had higher lactate dehydrogenase (LDH) than normal and 4 patients had hemophagocytic syndrome (HLH). Thirty-four patients had an IPI score of 3 to 5. All patients received CHOP, CHOP-like regimen or dose-adjusted etoposide, prednisone, vincristine, cysloposphamide and doxorubicin (DA-EPOCH) as first-line treatment. Median numbers of cycles per person were 6 (range, 4-8). Twenty-two patients received consolidative hematopoietic stem cell transplantation. With a median follow-up of 18 months (range, 5-73), 41 patients died, 13 patients survived with disease, and 26 patients survived without disease. The median PFS and OS were 13 months (95% CI 7.7-18.3) and 24 months (95% CI 17.2-30.8), respectively. Six patients with ALCL, ALK positive had a favorable prognosis compared with patients with other PTCL subtypes, with only one case had disease progression and died within 2 years, and the remaining 5 cases had been free of disease progression until the last follow-up. 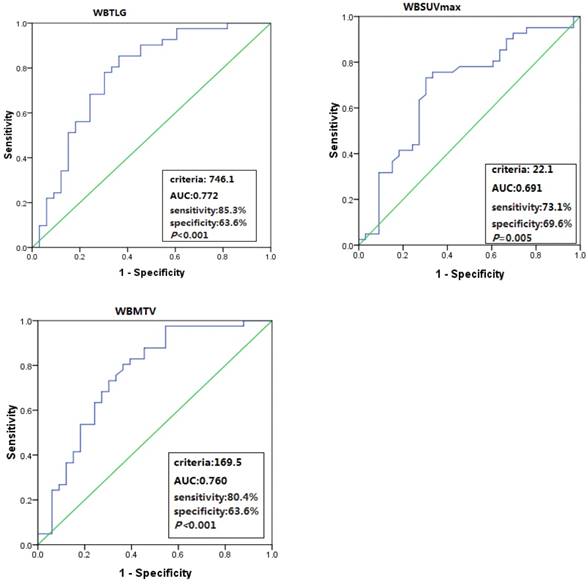 Kaplan-Meier estimates of PFS and OS according to the baseline SUVmax, WBSUVmax, WBMTV and WBTLG. 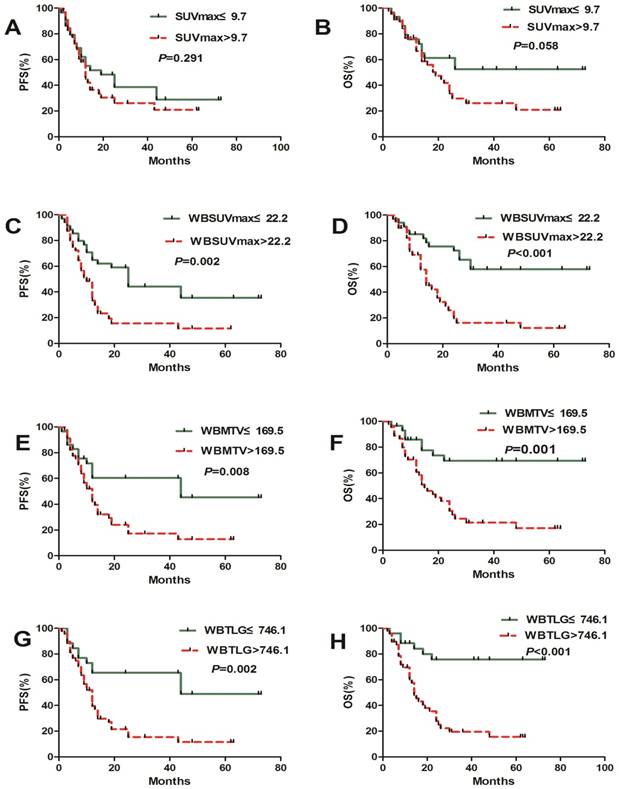 Comparison of clinical and PET/CT parameters

Patient characteristics stratified according to cut-off values of PET/CT parameters are presented in Table 2. Patients with high WBSUVmax had more extranodal involvement, higher LDH level, IPI and PIT scores (P=0.016, 0.025, 0.001 and 0.009, respectively). High WBMTV was associated with high IPI and PIT scores, as well as advanced stage (P=0.024, 0.039 and 0.011, respectively). High WBTLG was corelated with advanced stage and high IPI scores (P=0.013 and 0.036, respectively). SUVmax was only corelated with IPI (P=0.024).

Clinical characteristics for 80 patients with PTCL

The results of univariate analyses for OS and PFS using the clinical variables and PET parameters were showed in Table 3. The variables significantly associated with both PFS and OS were WBSUVmax, WBMTV, WBTLG, Stage III-IV, B symptoms, ECOG PS≥2, BMB-positive, LDH, IPI, PIT. Extranodal sites>1 was predictive of shorter OS. Parameters significantly associated with PFS and OS were entered into multivariate Cox proportional hazards model. The results showed that only WBTLG >746.1 and high PIT were independent predictors of both shorter PFS and OS. The P value of stage III-IV with PFS was borderline.

PTCL is a group of highly aggressive diseases originating from post-thymus mature T lymphocytes. Although prognostic indices for PTCL such as IPI, PIT and IPTCLP have been developed, the prognostic values are not well defined. It has been reported that MTV and TLG of PET/CT could reflect tumor burden. Recently, MTV/TLG has been widely used for predicting survival and making therapeutic decisions in DLBCL [12-16]. However, there have been few studies on the prognostic value of PET/CT parameters in PTCL. In these few studies, Deauville 5-point score (5-DS) of PET/CT was employed as a prognostic factor, but its prognostic value for PTCL has not been established. June et al [17] found that PET/CT 5-DS before treatment was predictive for prognosis in PTCL. Some other studies reported that PET/CT 5-DS after treatment could be a prognostic factor for PTCL [18,21]. However, Gurion R et al [20] evaluated the prognostic value of P-PET/CT, I-PET/CT and E-PET/CT using 5-DS method in PTCL, and found that 5-DS of PET/CT could not predict the prognosis of patients with PTCL.

Univariate and multivariate Cox regression analysis for PFS and OS.

Then, a further study of 140 patients with PTCL was carried out in seven research centers. PET/CT was performed after two cycles of treatment to evaluate the therapeutic effect using 5-DS method. They found that iPET/CT DS >3 could predict a poor prognosis. Combining 5-DS and MTV of PET/CT before treatment could better predict the prognosis of patients with PTCL [19].

To the best of our knowledge, our study is the first single center retrospective study to evaluate the prognostic value of baseline PET/CT quantitative parameters in the largest cohort of patients with PTCL. Among previous studies on PET/CT quantitative metabolic parameters in PTCL, ROI threshold was different. In South Korea, most of studies on ENKL used SUV 2.5 or SUV 3.0 as ROI threshold [7,9]. We used SUV3.0 as the ROI threshold to calculate the WBMTV and WBTLG in 74 PTCL patients without 6 ALK+ALCL patients and the cut-off values were 169.5 cm3 and 746.1 by retrospective ROC analysis, respectively. Both parameters are significantly related to PFS and OS, which are not exactly the same as those in the French study.

The median SUVmax in our study was 13.8 (range, 4.6-35.5), suggesting that PTCL is a highly aggressive lymphoma. Similar to the study in France, our study did not found that the prognostic value of SUVmax, but WBSUVmax in our study was significantly associated with OS and PFS. The WBSUVmax used by our center was the sum of SUVmax of the whole-body lesions as previously reported and was significantly associated with the prognosis in NK/T cell lymphoma [8]. WBSUVmax includes SUVmax of nodal and extra-nodal lesions, which could reflect the intensity of tumor invasion in patients. WBSUVmax eliminates the need for additional software and incorporates standard harmonization, making it more applicable than WBMTV and WBTLG in different research centers. Its prognostic value in ENKTL has also been demonstrated, suggesting that it might be an important prognostic indicator for lymphoma.

Our study is one of the few studies focusing on the prognostic value of PET/CT quantitative parameters in PTCL. The results of our study suggest that high WBTLG, WBMTV and WBSUVmax could be prognostic factors of PTCL. WBSUVmax might be more applicable in clinical practice due to its simplicity in calculation. Combination of TLG and PIT could more accurately predict the prognosis of patients and guide treatments. Due to the relatively small sample size, further investigations are needed to confirm our findings.