Colorectal cancer (CRC) is a major human digestive tract tumor throughout the world and the incidence increases with increasing age [1]. According to the latest world health organization (WHO) statistics, colorectal cancer is the third most common malignancy, second only to lung cancer and gastric cancer [2]. The occurrence of colorectal cancer is caused by many factors, such as heredity and environment, which is a complicated process involving multiple transcripts and stages.

Pathogenic mechanisms of CRC are clinically important because they are associated with the patient's prognosis and response to treatment [1]. The pathogenesis leading to colorectal cancer can be included in following types: chromosomal instability (CIN), microsatellite instability (MSI)/mismatch repair (MMR) and CpG island methylator phenotype (CIMP) [3].

Sufficient evidence has been shown that abnormal signal transduction exists in the initiation and progression of tumor. Cell signal transduction pathways associated with colorectal cancer mainly include Wnt-β-catenin, PI3K/Akt and TGF-β signaling pathway [4-6]. On the other hand, transcripts like c-MYC, KRAS, BRAF, PIK3CA, SMAD2 and SMAD4 can also be considered as predictive biomarkers for patient's prognosis [7].

The single-cell transcriptome sequencing is a newly developed technology and measures the sum of all the RNA in a particular cell [8]. Through high throughput sequencing, it is possible to obtain almost all transcriptional sequence information of a specific tissue or organ comprehensively and rapidly. This technology has been widely used in the fields of basic research, clinical diagnosis and drug development [9]. Moreover, it can also be used for tumor heterogeneity research and the discovery of aberrant proliferative cell types to look for new pathogenesis and mechanisms [10].

The single-cell transcriptome of CRC and normal epithelial cells

We downloaded the processed FPKM (Fragments Per Kilobase of transcript per Million mapped reads) single-cell transcriptome of 272 CRC epithelial cells and 160 normal epithelial cells from GEO (Transcript Expression Omnibus) database under accession number of GSE81861 [14]. Li et al. [14] collected the normal mucosa and CRC tissue and performed single cell sequencing. There were Myeloid, B cell, T cell, Mast, Endo and Epithelial cells in these colorectal tissues. Since most of them were epithelial cells, we focused on epithelial cells. All the data we used have passed the criteria of NODG (number of detected genes) ≥ 1,000, ROER (rate of exonic reads) ≥ 5% and ER (exonic reads) ≥ 0.1 million. More information of data quality control can be found in Li et al. [14]

to denote the selected m transcripts, and

to denote the to-be-selected n transcripts. The relevance

was calculated with mutual information (I) equation [22, 23]:

The redundancy R of the transcript

with the selected transcripts in

The goal is to select the transcript

that has maximum relevance with cell type

and minimum redundancy with the selected transcripts in

becomes empty, all the transcripts are ranked

To determine how many mRMR transcripts should be selected, Incremental Feature Selection (IFS) method [24-30] was applied. As a wrapped feature selection method, IFS method evaluated the performances of SVM (Support Vector Machine) classifiers constructed based on different transcript combinations. We used the function svm with default parameters in R package e1071 (https://CRAN.R-project.org/package=e1071) to construct the SVM classifier.

Since the transcripts have been ranked using mRMR, it is unnecessary to try all transcript combinations. As a greedy optimization method, each time, one transcript was added into the previous transcript set [31-34] and the classification performance of the updated transcript set was evaluated with leave-one-out cross validation (LOOCV).

where TP, TN, FP and FN were the number of true positive, true negative, false positive and false negative samples.

The up and down regulated transcripts in CRC epithelial cells

The transcripts were ranked with mRMR method

The optimal transcript combinations were identified with IFS method 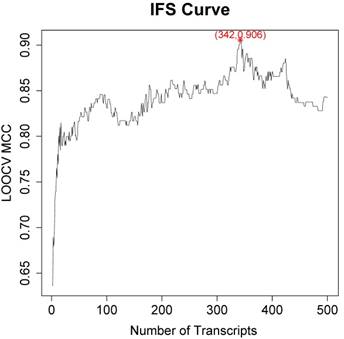 The biological analysis of top transcripts

The second transcript was PHGR1 which has been reported to play an essential role in gastrointestinal epithelium and has demonstrated potentials for clinical application in colorectal cancer lymph node metastases detection [37].

The third transcript was C15orf48. It was mainly expressed in esophagus, stomach, small intestine, colon and placenta. The associations between and squamous cell carcinoma has been reported [38].

The fourth transcript was HEPACAM2, a protein of the immunoglobulin superfamily, which plays a role in mitosis. Its expression level was increased in adenomas, the benign stage of tumor glandular tissues, such as the mucosa of small intestine and colon [39]. It seems to be involved in cell-cell adhesion and play an important role in tumor metastasis [39].

Another top promising transcript was PERP. It is the component of intercellular desmosome junctions and plays a role in cell-cell adhesion and stratified epithelial integrity. It is involved in p53 Pathway in CRC [40].

FABP1 ranked 10th and encoded the fatty acid binding protein. It is down regulated in colorectal carcinogenesis and associated with poorer prognosis. Lower expression of FABP1 indicated liver metastasis of CRC. FABP1 expression was observed throughout cancer development [41].

The 13th transcript was FCGBP. The FCGBP expression significantly decreased the overall survival of CRC patients and may be a potential therapeutic target for metastatic CRC patients [42].

The 15th transcript MT1G was related to metabolism and response to metal ions. It is silenced through epigenetic mechanisms during colorectal cancer progression, and its loss is associated with poor survival of CRC [43].

TSPAN1, a member of the transmembrane 4 superfamily, ranked 18th. The expression level of TSPAN1 is increased in colorectal carcinoma and is an independent prognostic factor for the colorectal adenocarcinoma patients [44]. It can be regulated by miR-638 which inhibits TSPAN1 and serve as a tumor suppressor [45].

The 20th transcript in Table 1 was CKB. Interestingly, CKB is overexpressed in most cancer types, but not in CRC. In CRC, CKB is downregulated. The downregulation of CKB promotes EMT and accelerate colon cancer progression [46].

The transcripts were up or down regulated in CRC epithelial cells

The significantly enriched KEGG pathways of the up regulated transcripts in CRC epithelial cells was given in Table 2. It can be seen that Ribosome, Protein processing in endoplasmic reticulum, Antigen processing and presentation, p53 signaling pathway were enriched.

The significantly enriched KEGG pathways of the down regulated transcripts in CRC epithelial cells was given in Table 3. It can be seen that in CRC epithelial cells, the activity of Mineral absorption, Aldosterone-regulated sodium reabsorption and Oxidative phosphorylation were decreased. Han et al. have also reported that the differentially expressed genes (DEGs) of Colorectal cancer were enriched in mineral absorption [54].

The network of the key transcripts in CRC epithelial cells

We mapped the 342 key transcripts in CRC epithelial cells onto STRING network [55] and constructed their interaction network with confidence score greater than 0.4. The network was shown in Figure 3. 280 genes can be mapped and they had 578 interactions which were much more than expected 349 edges with PPI (Protein-Protein Interaction) enrichment p-value smaller than 1.0e-16. They were biologically connected as a group. 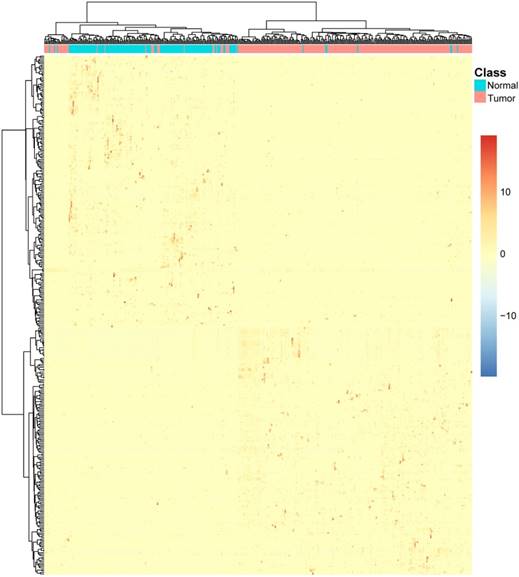 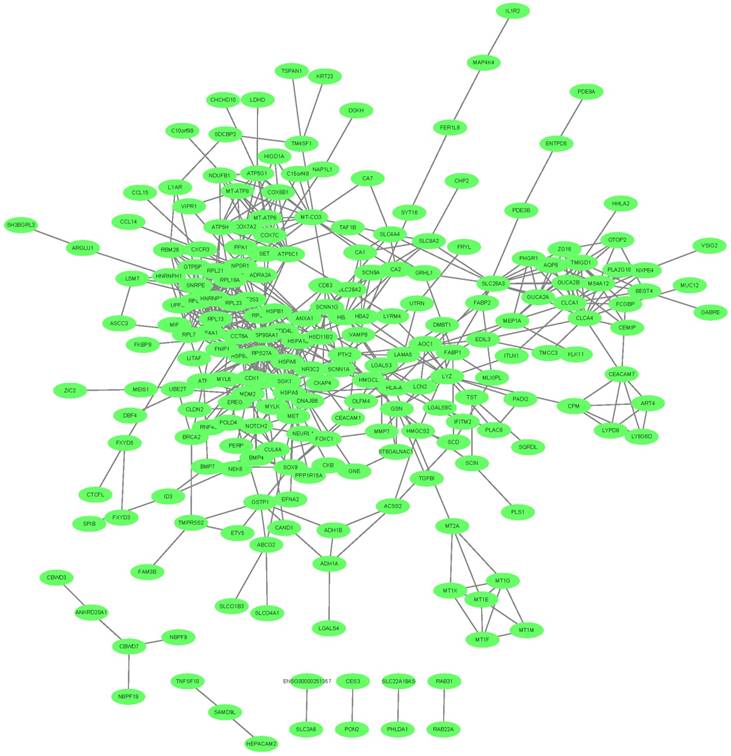 Compare the key transcripts with other CRC signature genes

Tumor heterogeneity is a key issue for cancer diagnosis and treatment. The traditional analysis of tumor tissues from cancer patients are usually difficult to reproduce since the tumor tissue is a mixture of different cells. The single cell sequencing enables the gene expression profiles on cell level. In this study, we analyzed the single-cell transcriptome of CRC epithelial cells and normal epithelial cells and identified the differentially expressed transcripts using advanced machine learning methods. It was found that the upregulated transcripts in CRC epithelial cells were significantly enriched in Ribosome, Protein processing in endoplasmic reticulum, Antigen processing and presentation and p53 signaling pathway while the downregulated transcripts in CRC epithelial cells were significantly enriched in Mineral absorption, Aldosterone-regulated sodium reabsorption and Oxidative phosphorylation pathways. The biological analysis of selected transcripts revealed the possible mechanism of colorectal cancer.