Aims: To construct a predictive model for overall survival (OS) in unresectable pancreatic cancer (PaC) undergoing systemic chemotherapy and to confirm its accuracy in an independent cohort.

Patients and methods: The training set (Ts) and the validation set (Vs) included 93 patients (median age=71 years) and 75 patients (median age=76 years). In the Ts, we examined variables linked to OS by uni- and multivariate analyses and constructed a predictive model for OS. Next, we evaluated the reproducibility of the proposed model in the Vs.

Pancreatic cancer (PaC) is associated with a dismal prognosis, highlighted by the close relationship between cancer incidence and mortality [1-3]. The 5-year overall survival (OS) rate in PaC patients with advanced tumor status is extremely low [1-3]. The dismal prognosis is attributed to several causes: most importantly, numerous PaC patients are found in an advanced condition and the tumor is often unresectable because of its invasion to major vessels or distant metastases although several approaches to diagnosing PaC in its early stages have been attempted [1, 2, 4-8]. According to Japanese cancer statistical data in 2016, PaC has the seventh-highest rate of incidence and it is the fourth leading cause of death in Japan [9]. The Japanese clinical practice guidelines for systemic chemotherapy in unresectable PaC patients recommend the administration of following chemotherapeutic drugs: gemcitabine monotherapy, S-1 monotherapy, combined gemcitabine and S-1 therapy, combined nab-paclitaxel and gemcitabine therapy, or a combination chemotherapeutic regimen consisting of irinotecan, fluorouracil, oxaliplatin and leucovorin, considering baseline characteristics such as age, organ function, performance status (PS) and tumor status of each patient [10-15].

PaC was diagnosed primarily according to the current guidelines [26]. In brief, abdominal ultrasonography and dynamic computed tomography (CT) of the whole pancreas was routinely performed before starting systemic chemotherapy. In cases without typical radiological tumor findings for PaC, tumor biopsy or endoscopic ultrasonography-guided fine needle aspiration was in consideration [27]. In this study, the pathological diagnosis was confirmed in 44 cases (47%) in the Ts and 54 cases (66%) in the Vs.

Each attending physician determined chemotherapeutic agents through discussion with colleagues. In PaC subjects without remarkable risk factors, the recommended starting dose of each chemotherapeutic drug (S-1, gemcitabine, 5-fluorouracil or nab-paclitaxel) was administered [4, 28]. The reduced starting dose was administered to some patients based on clinical characteristics, including age, ECOG-PS, body weight, and laboratory data. During systemic chemotherapy, the dose of chemotherapeutic drugs was appropriately adjusted by each attending physician considering the severity of adverse events. In patients with adverse events, systemic chemotherapy was stopped until the clinical symptoms improved to grade 1 or 2, and other alternative treatment regimens were in consideration. Other alternative regimens were also in consideration for subjects with poor treatment response to initial chemotherapy. Systemic chemotherapy was continued until any of the following conditions occurred: unacceptable toxicity for chemotherapy, tumor progression or the patient's wish to stop chemotherapy.

For the aim of our study, a Ts in whom systemic chemotherapy was performed in Hyogo college of medicine hospital (n=93) was formed. In the Ts, we examined variables linked to OS by uni- and multivariate analyses and constructed a predictive model for predicting OS. Next, we evaluated the reproducibility of the proposed model in the subsequent Vs (n=75), which included patients in the other hospital (Takarazuka municipal hospital). (Figure 1) Clinical data in the Ts were examined retrospectively and the constructed model was also verified in a retrospective manner for the independent Vs. Psoas muscle index (PMI) for the assessment of muscle mass was measured using CT as reported elsewhere [30].

Institutional review boards in each participating hospital approved the current study protocol (approval no. 2117 in Hyogo college of medicine hospital and 201707 in Takarazuka municipal hospital), with strict compliance for all of the provisions of the Declaration of Helsinki. 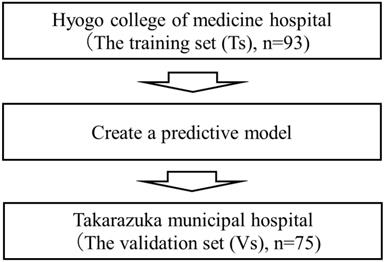 OS curve was built by the Kaplan-Meier method and compared by the log-rank test. In continuous variables, the statistical comparison among groups was done by Student's t test or Mann Whitney U test, as applicable. Categorical variables were compared by Fisher's exact tests or Pearson χ2 test, as applicable. Unless otherwise stated, data were expressed as median value (range). P value less than 0.05 was considered to be significant statistically with the JMP 14 (SAS Institute Inc., Cary, NC).

Baseline characteristics in the training set and validation set.

Overall survival in the Ts (A) and the Vs (B). MST indicates median survival time.

OS in the Ts and the Vs

Uni- and multivariate analyses of factors linked to overall survival in the training set. 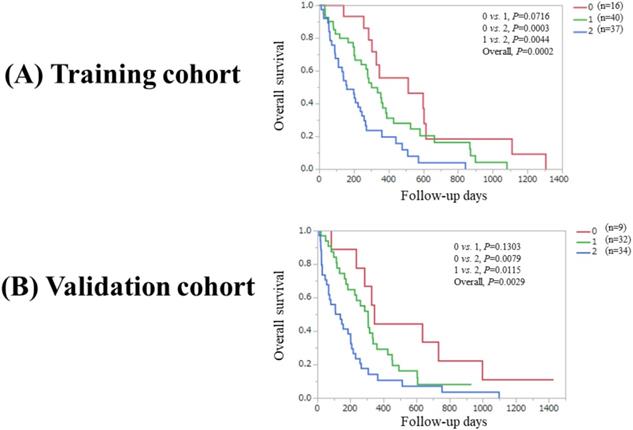 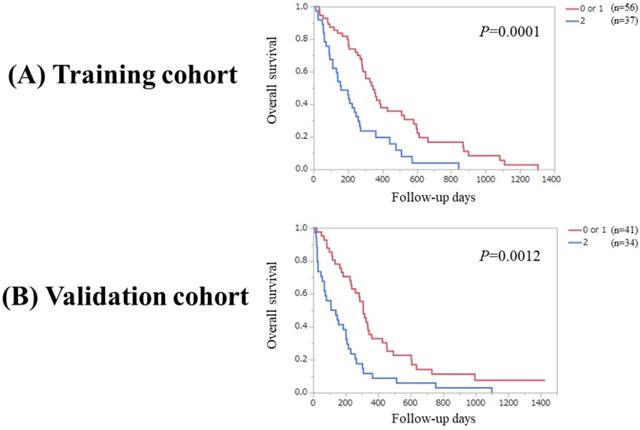 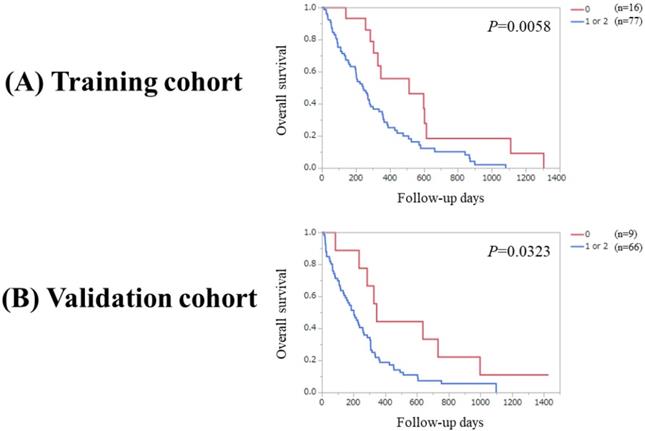 Overall survival stratified by PaC-CA score (0 and 1 or 2) in the combined Ts and Vs. 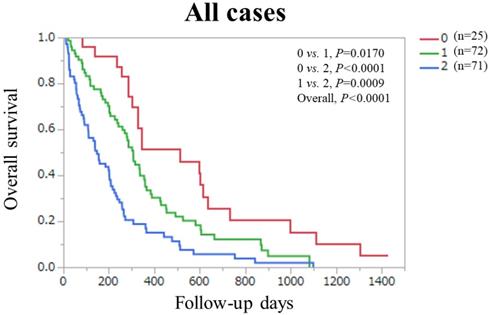 Decision making in the clinical settings in cancer patients may be challenging and predictive model may be helpful from the viewpoint of appropriate decision making. Here in the current study, we created a simple predictive model called “PaC-CA score”, which included tumor stage and CA19-9 level. Clinicians are very familiar with these parameters in the routine clinical practice and thus PaC-CA score may be convenient and easy to access. Several predictive models such as combined platelet-to-lymphocyte ratio and CA 19-9 were proposed for PaC patients undergoing surgery [16, 17, 19-23]. While, to the best of our knowledge, this is the first study for constructing a simple predictive model for OS in unresectable PaC patients undergoing systemic chemotherapy, and validating its accuracy in an independent cohort, which was a major strong point of our current analysis.

In our results, the overall significance was noted in the Ts, the Vs and the combined Ts and Vs among patients with PaC-CA score 0, 1 and 2. Baseline characteristics between the Ts and the Vs were different in several parameters as shown in table 1 and our proposed model was well confirmed in the Vs and the combined Ts and Vs. These results denoted that our proposed predictive model can be helpful for risk stratification in PaC patients undergoing systemic chemotherapy. While between PaC-CA score 0 and 1 in the Ts and between PaC-CA score 0 and 1 in the Vs, significant difference was not noted. These results may be attributed to the small sample size of patients with PaC-CA score 0 in the Ts (n=16) and the Vs (n=9). In comparison of Kaplan-Meier curves between PaC-CA score 0 and 1, that of PaC score 0 is almost persistently above that of PaC score 1 as presented in figure 3, and thus we believe our predictive model is robust.

A recent study reported that CA19-9 expression in mice activated the epidermal growth factor receptor signaling, and it also cooperated with the Kras oncogene to develop aggressive pancreatic cancer [31]. Takagi, et al. demonstrated that the elevation of post-operative serum CA19-9 value was associated with an adverse outcome and reflected positivity of resection margins, and high pre-operative CA19-9 values suggested the presence of occult distant metastasis in PaC patients undergoing surgery [32]. Other several reports also demonstrated that CA19-9 may be involved in prognostic implication in PaC patients [16, 17, 33-35]. Our results were in agreement with these reports.

Recently, sarcopenia as defined by low skeletal muscle mass and low skeletal muscle function has been gaining much interest due to its prognostic impact in cancer patients [36-39]. A recent meta-analysis regarding outcome in PaC patients receiving surgery reported that sarcopenia was associated with increased peri-operative mortality and decreased OS [37]. While contrary to our expectations, PMI was not selected as significant factor for OS in our cohort. In our data, PMI in male ranged from 0.703 to 8.011 cm2/m2 (median, 2.447 cm2/m2) and PMI in female ranged from 0.509 to 4.662 cm2/m2 (median, 1.952 cm2/m2), which is considerably lower compared with the cutoff values of PMI for muscle mass decrease in male (6.36 cm2/m2) and female (3.92 cm2/m2) reported by Hamaguchi, et al [40]. These results may be associated with not only sarcopenia but also cancer-related cachexia [41, 42]. The fact that most of our analyzed subjects had low PMI may explain for the non-significance of PMI on OS.

Several limitations warrant mention to this study. First, our current investigation was a retrospective observational study and biases inherent to retrospective studies were unable to be completely removed, although our proposed model was verified in an independent cohort. Second, the starting chemotherapeutic drugs differed between the analyzed subjects and these differences may lead to bias for OS. Third, the sample size was relatively small for analysis (less than 100 cases both in the Ts and the Vs), potentially creating bias. Finally, our study cohort only included Japanese unresectable PaC patients in whom baseline characteristics such as body weight are different from PaC patients in Western countries [43]. Whether our current results are directly applied to different ethnic backgrounds is therefore unclear. However, the present study results demonstrated that PaC-CA score can be helpful for risk stratification in PaC patients treated with systemic chemotherapy.

In conclusion, our proposed predictive model can be useful in unresectable PaC patients undergoing systemic chemotherapy.

The authors would like to thank all medical staff in Hyogo college of medicine hospital and Takarazuka municipal hospital for their valuable support.