The tumor necrosis factor super family (TNFSF) of ligands is a diverse group of cytokines that induce a variety of responses from inflammation to apoptosis. TNFSF ligands include TNFα, TRAIL and FasL. These ligands are also referred to as death ligands and their cognate receptors are referred to as death receptors. TNFα is the most pleiotropic member of the TNFSF ligand family. TNFα is a pro-inflammatory cytokine secreted by multiple immune cells. TNFα promotes cancer cell growth, angiogenesis, metastasis and apoptosis [10].

The NFκB family of proteins consist of five members: p105/50, p110/52, RelB, RelA(p65) and c-Rel. Active NFκB transcription factor exist as a homodimer or heterodimer, with p50/p65 representing the prominent dimer. Upon activation of the NFκB pathway, the NFκB inhibitor, inhibitor of NFκB (IκB), is phosphorylated by IκB kinase (IKK) causing the release of NFκB and translocation to the nucleus where NFκB serves as a transcription factor. NFκB is primarily associated with expression of pro-survival genes such as Bcl-2 [11], c-flip [12], and XIAP [13].

X-linked inhibitor of apoptosis (XIAP) is a target gene of NFκB that promotes cell survival following certain cell death-inducing stimuli. XIAP inhibits apoptosis by binding to activated caspases-3, -7 and -9 [14]. Therefore, XIAP is a negative regulator of apoptosis. Endogenous inhibition of XIAP is achieved by second mitochondrial-derived activator of caspases (SMAC). SMAC binds XIAP, thus preventing XIAP-mediated inhibition of apoptosis. The ability of SMAC to inhibit XIAP was the basis for the investigation of SMAC mimetics as a therapeutic option for cancer [15].

Following drug treatment, floating cells and attached cells were collected and centrifuged at 1000 rpm for 5 min at 4oC. The resultant pellet was lysed with RIPA lysis buffer containing protease and phosphatase inhibitor cocktail and centrifuged at 12,000 rpm for 10 min at 4oC. Supernatants were then collected and total protein was determined by BioRad reagent (BioRad Laboratories, Hercules, CA). Where applicable, cytoplasmic and nuclear fractions were separated by use of a nuclear extraction kit according to manufacturer's instructions (Cayman Chemical, Ann Arbor, MI). Fifty micrograms of protein were resolved in SDS-polyacrylamide gels (SDS-PAGE) and transferred onto nitrocellulose membranes (BioRad Laboratories, Hercules, CA). Membranes were next blocked with 5% nonfat milk followed by incubation with antibodies against FADD, cleaved caspase-3, pIκB, p50, p65, Lamin B or beta-actin. Membranes were next washed and incubated with appropriate secondary antibody conjugated to HRP (GE Healthcare Life Sciences, Piscataway, NJ). Following secondary antibody incubation, membranes were washed and signal detected with ECL detection reagent (GE Healthcare Life Sciences, Piscataway, NJ). Lamin B served as a nuclear marker. Beta-actin served as a protein loading control.

Knock down of FADD protein increases sensitivity to TNFα 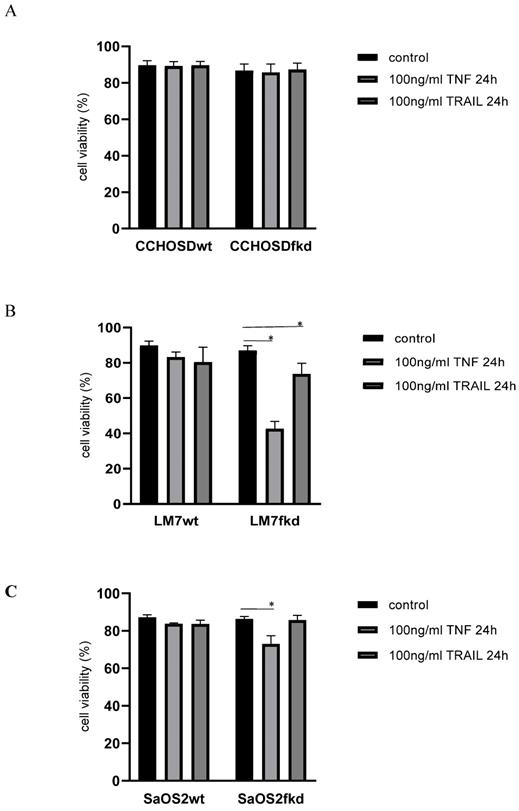 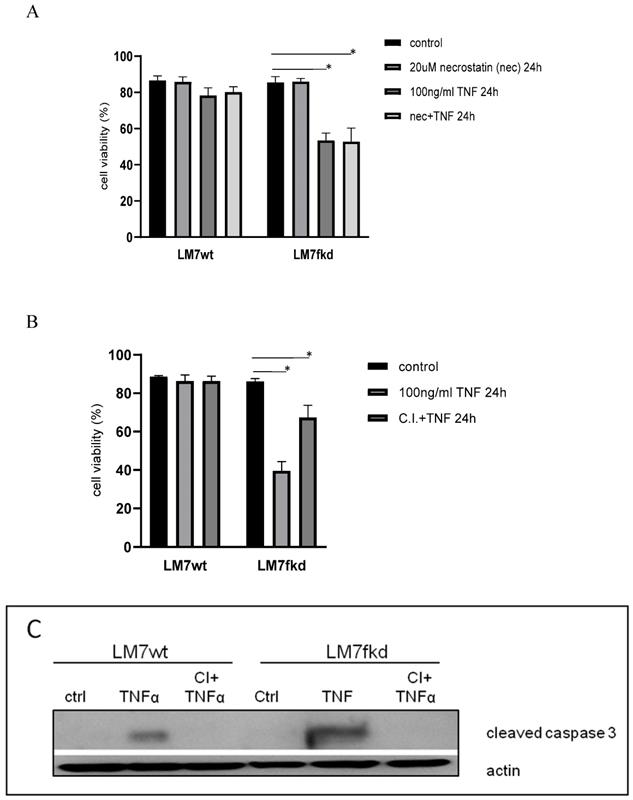 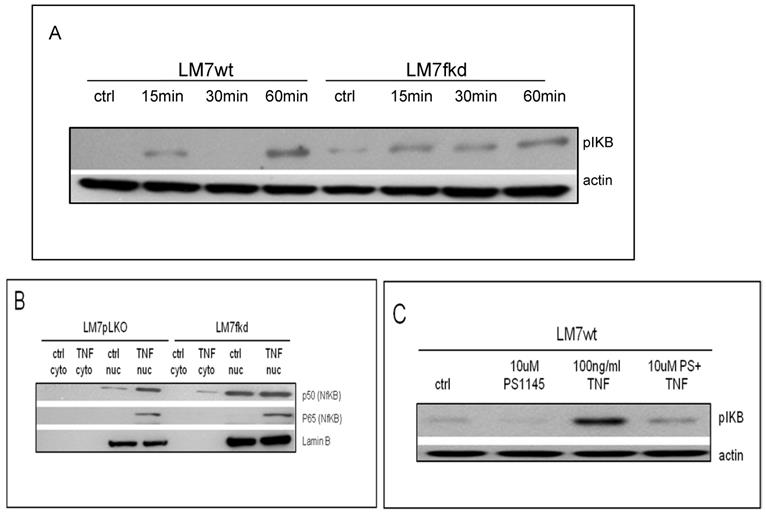 FADD was first identified as an adaptor protein that links Fas to caspase-8 with subsequent activation of apoptosis and subsequent cell death. Subsequent studies reported non-apoptotic functions for FADD. The early non-apoptotic functions for FADD were reported in T cells [7, 8]. Later studies reported non-apoptotic or pro-survival functions for FADD beyond T cells, to include cancer cells [9]. While FADD has recently been reported to have a protective role against anticancer drug-induced cell death in pancreatic cancer cells [9], there are no reports on the effect of FADD knockdown on cell death in OS induced by death ligands such as TNFα or TRAIL. This study set out to investigate the effect of TNFα on cell death in OS cells with FADD knockdown. The death ligand TRAIL was also investigated as a comparison death ligand. 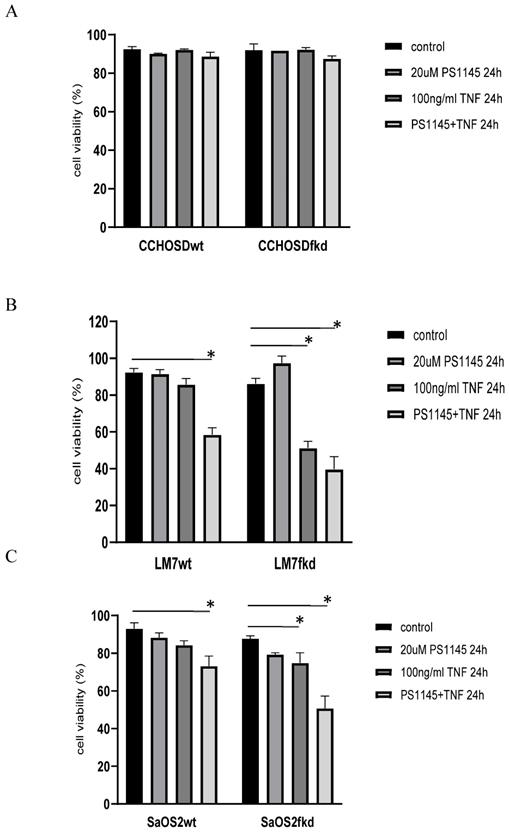 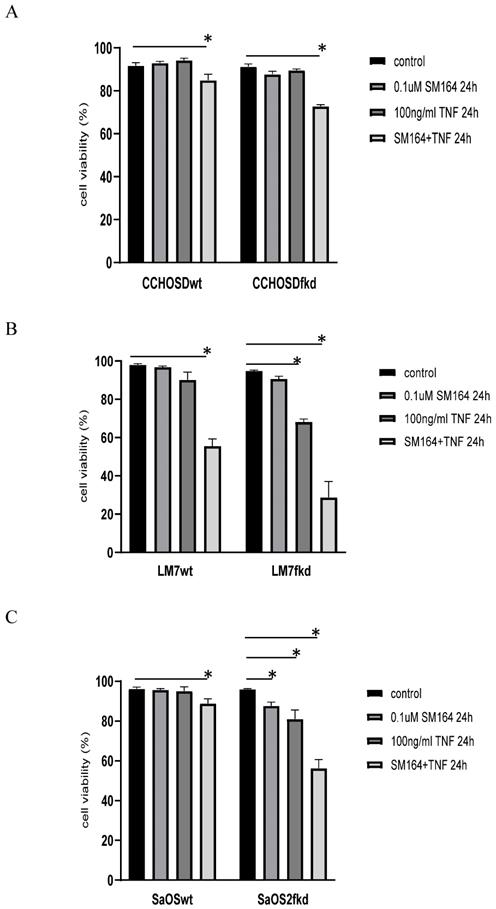 The observation that FADD knockdown increased TNFα-induced cell death in both NFκB-inhibited and XIAP-inhibited cells suggest that FADD has a role in linking TNFα signaling to NFκB-mediated pro-survival pathways. It is plausible that in certain contexts or cancer cells, FADD may serve as an adaptor protein that links TNFα signaling to the pro-survival NFκB pathway. Therefore, when FADD is inhibited by mutation or there is decreased expression of FADD, the effect of TNFα signaling is cell death. In the absence of FADD, the c-Jun N-terminal kinase (JNK) pathway has been suggested as a pathway for TNFα-induced apoptosis [31]. Therefore, although not investigated in the current study, it is plausible that the cell death observed in FADD knockdown cells may occur through the JNK pathway.

Cellular status of FADD has been proposed to have clinical relevance as a prognostic indicator for certain cancers. For example, increased phosphorylation of FADD has been implicated in poor prognosis in lung adenocarcinoma [32]. Additional observations supporting the pro-survival role of phosphorylated FADD in cancer is the report that inhibition of FADD phosphorylation increases cisplatin-induced cell death in A549 lung cancer cells [33] and the report of increased FADD phosphorylation in T cell lymphomas [34]. Furthermore, FADD gene amplification and FADD overexpression has been reported in oral squamous cell carcinoma [35].

11. Catz SD, Johnson JL. Transcriptional regulation of bcl-2 by nuclear factor kappa B and its significance in prostate cancer. Oncogene. 2001;20:7342-51

28. Khwaja A, Tatton L. Resistance to the cytotoxic effects of tumor necrosis factor alpha can be overcome by inhibition of a FADD/caspase-dependent signaling pathway. J Biol Chem. 1999;274:36817-23