Purpose: FKBP4 is a member of the immunophilin protein family, which plays a role in immunoregulation and basic cellular processes involving protein folding and trafficking associated with HSP90. However, the relationship between abnormal expression of FKBP4 and clinical outcome in luminal A subtype breast cancer (LABC) patients remains to be elucidated.

Results: For the first time, we found that higher FKBP4 expression correlated with LABC patients and worse survival. Moreover, the upregulated co-expressed genes of FKBP4 were assessed to be significantly correlated with worse survival in LABC, and might be involved in the biological role of FKBP4.

Conclusion: The expression status of FKBP4 is a significant prognostic indicator and a potential drug target for LABC.

Breast cancer (BC) is the most common noncutaneous cancer and the most frequent cause of death in worldwide women [1]. Widespread adoption of screening increases breast cancer incidence in given population and current prognostic and predictive biomarkers have markedly improved treatment options for patients. However, BC is a heterogeneous disease of multiple distinct subtypes that differ genetically, pathologically, and clinically [2], it's still necessary to find more reliable markers to further improve therapeutic strategy for individual patients.

The FK506-binding protein 4 (FKBP4, also known as FKBP52) has been reported to possess multiple functions in various kinds of cancers based on its interaction with different cellular targets[3-6]. For example, in prostate cancer FKBP4 is found to enhance the transcriptional activity of androgen receptor signaling [3]. However, the relationship between abnormal expression of FKBP4 and clinical outcome in luminal A subtype breast cancer (LABC) patients remains unknown. For the first time, we investigated FKBP4 expression in LABC and its interaction with clinicopathological features including molecular subtypes and clinical outcomes by bioinformatics analysis.

In the present study, we used Oncomine, the Human Protein Atlas (HPA) database and breast cancer gene-expression miner (bc-GenExMiner) database to identify the potential difference of FKBP4 expression between BC cancer tissues and adjacent normal samples, as well as the association between FKBP4 and clinical parameters. We further probed into genetic alterations and clinical outcomes of high and low level of FKBP4 expression in breast cancer patients. Lastly, preliminary explorations of the mechanisms of FKBP4 involving BC were carried out by identifying co-expressed genes with a series of online databases.

The online cancer microarray database, Oncomine (www.oncomine.org) [7] was used to assess the transcription levels of FKBP4 in breast cancer specimens compared with that in normal controls by Students't-test. The immunohistochemistry results of FKBP4 and six co-expressed genes in breast cancer were retrieved from the Human Protein Atlas database (www.proteinatlas.org) [8]. The expression and prognostic module of bc-GenExMiner v4.2 (bcgenex.centregauducheau.fr) [9] were used to evaluate the clinicopathological characteristics and prognostic merit of FKBP4 and six co-expressed genes in human breast cancer.

COSMIC and cBioPortal analysis for mutations

Co-expressed genes of FKBP4 in breast cancer were collected from GEPIA (gepia.cancerpku.cn) for further evaluation [12].

Gene Oncology (GO) and Kyoto Encyclopedia of Genes and Genomes (KEGG) analyses of FKBP4 co-expressed genes were analyzed using The Database for Annotation, Visualization and Integrated Discovery v6.8 (david.ncifcrf.gov)[13]. The String database (www.string-db.org) was applied to construct the protein-protein interaction network for the co-expressed genes identification [14].

Based on the Oncomine database, we discovered that FKBP4 mRNA expression was significantly upregulated in cancerous samples compared with normal samples in more than nine types of cancer, including breast cancer, bladder cancer, colorectal cancer, gastric cancer, leukemia and so forth (Figure 1A). Meanwhile, the transcription level of FKBP4 in different types of BC were higher than normal tissues, including ductal breast carcinoma in situ (DBC in situ) with fold change=3.650, invasive lobular breast carcinoma (ILBC) with fold change=2.245, and invasive ductal breast carcinoma (IDBC) with fold change=2.657, invasive ductal and invasive lobular breast carcinoma (IBC) with fold change=2.480 (Figure 1B-1E). To investigate the protein expression level of FKBP4 in BC, we assessed BC tissue samples and matched adjacent normal tissues from the HPA database. The HPA database indicated that FKBP4 expression was significantly elevated in cancerous tissues compared with corresponding normal tissues when using either antibody HPA006148 (Figure 2A-2D) or antibody CAB017441 (Figure 2E-2F).

Relationship of FKBP4 with the clinicopathological characteristics and the prognostic merit

In bc-GenExMiner database, for the molecular subtype, upregulated FKBP4 was significantly related to luminal A, luminal B and basal-like subtype patients than the normal group rather than HER2 positive subtype (Figure 3A). ER and PR status were both positively correlated with FKBP4 expression (Figure 3B-3C). In BC patients with HER2 overexpression, FKBP4 expression has no significant change compared with HER2 negative groups (Figure 3D). To further probe into the correlation of FKBP4 expression and survival, BC patients with diverse molecular subtypes were also investigated. Upregulated FKBP4 was only significantly related to worse survival in luminal A subtype patients (HR=1.38; 95%CI:1.12-1.70, p=0.0027), but not correlated to those in luminal B, HER2 positive and basal-like subtypes of breast cancer patients (HR=0.97; 95%CI:0.75-1.26, p=0.8098; HR=1.08; 95% CI:0.81-1.44, p=0.5835; HR=0.83; 95% CI:0.64-1.07, p=0.1539) (Figure 3E-3H). Taken together, we found that upregulated FKBP4 expression was correlated with poor survival in LABC patients.

The impact of alterations in FKBP4 gene on the clinical survival 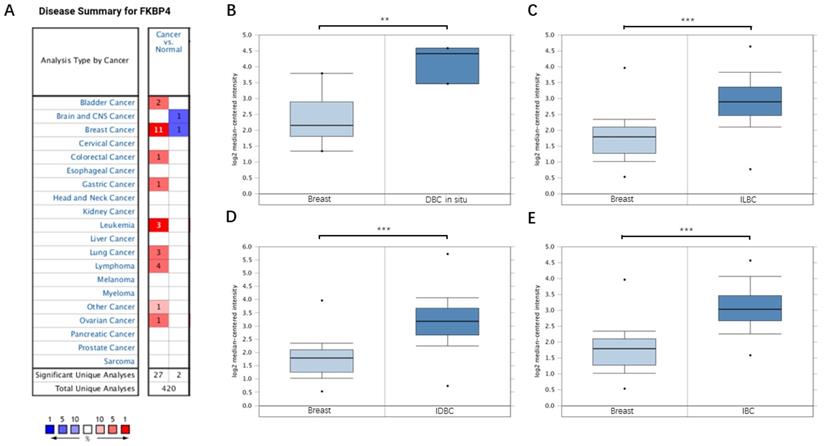 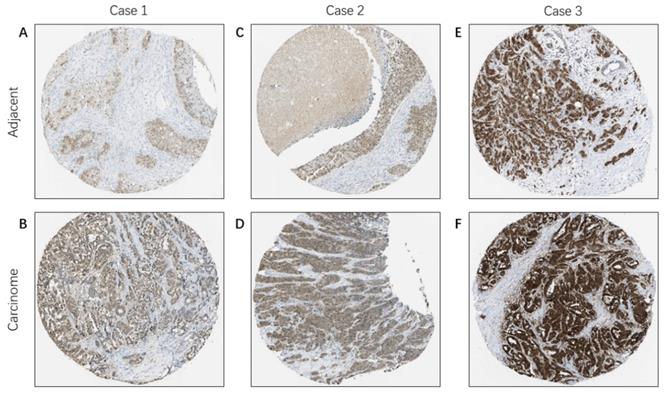 Relationship of FKBP4 with the clinicopathological characteristics and the prognostic merit (bc-GenExMiner v4.2 database). The relationship between mRNA expression of FKBP4 and (A) different molecular subtypes, (B) ER, (C) PR, (D) HER2. Survival curves are plotted for patients of (E) luminal A, (F) luminal B, (G) HER2-positive, (H) basal-like. 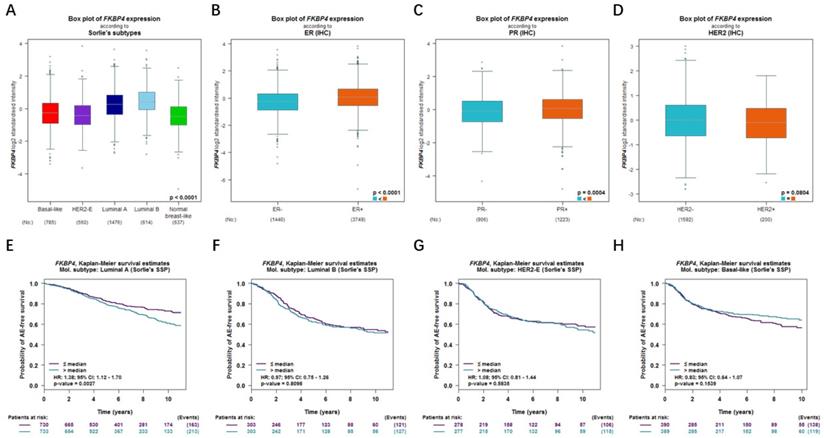 FKBP4 genes expression and mutation analysis in BC (COSMIC and cBioPortal). (A, B) Pie-chart showed the percentage of the mutation type of FKBP4 in BC according to COSMIC database. (C) Oncoprint in cBioPortal represented the proportion and distribution of samples with alterations in FKBP4 gene. (D) Kaplan-Meier plots comparing OS in cases with/without FKBP4 gene alterations. (E) Kaplan-Meier plots comparing disease free survival (DFS) in cases with/without FKBP4 gene alterations. 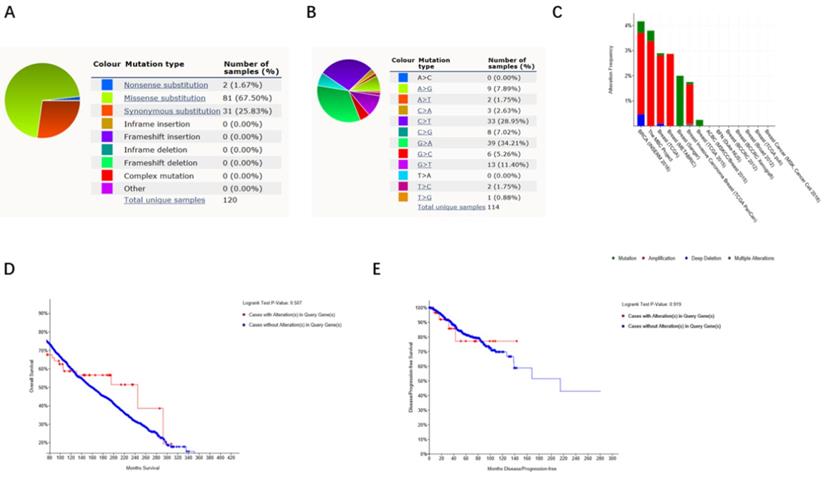 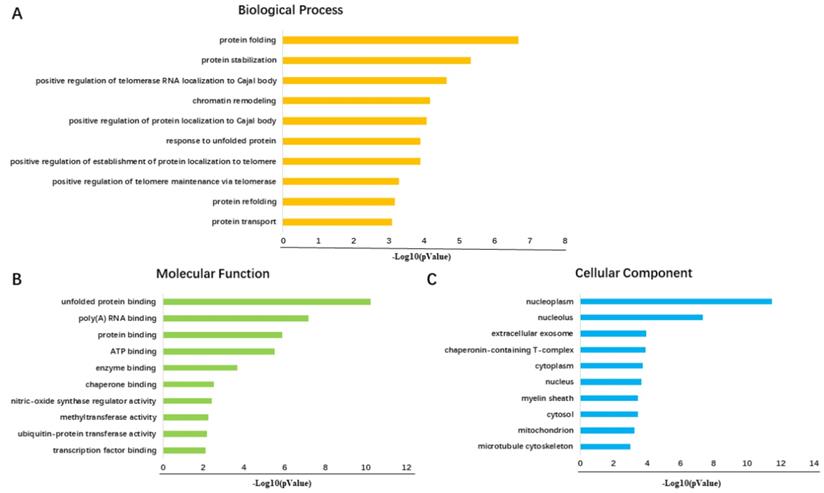 Top 20 pairs of co-expressed genes from the PPI network

A total number of 200 FKBP4 co-expression genes collected from GEPIA were analyzed using the Database for Annotation, Visualization and Integrated Discovery v6.8 (DAVID). The Gene Ontology enrichment analysis comprised three categories: a biological process (BP), a molecular function (MF), and a cellular component (CC). The most valuable 10 pathways of each category were presented in Figure 5A-5C, suggesting that FKBP4 co-expression genes might participate in multiple basic functions including protein folding and binding. The protein-protein interaction (PPI) network was displayed using the String database (Figure 6), and three pairs of co-expressed genes with the highest combined scores (TCP1, CCT2, CCT6A, CCT7, STIP1 and HSP90AB1) were collected from PPI network (Table 1). 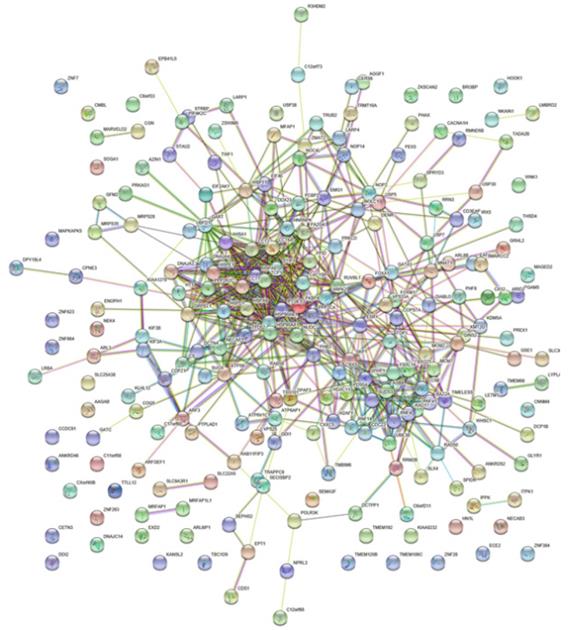 Breast cancer is a leading cause of cancer-related deaths in women aged 40 years and younger[1]. Although in recent years early detection and personalized therapeutics have decreased mortality of BC, discovering novel prognostic indicators are still necessary for improving the prognosis of BC patients. Here, we found that upregulated FKBP4 might play a central role in regulating its co-expressed protein expression in BC.

FK506-binding protein (FKBP) family in Homo sapiens (human) genomes has included 18 FKBPs up to date, which can target on various pathways in embryonic development, stress response, cardiac function, cancer tumorigenesis and neuronal function [15]. In breast cancer, FKBP5 is the most extensively studied protein among identified human FKBPs, which is demonstrated to interact with HSP90 to affect steroid hormone receptor function [16]. In colorectal cancer, silencing FKBP3 has been found to attenuate oxaliplatin resistance by regulation of the PTEN/AKT axis [17].

A growing body of studies observed that FKBP4 expression was also upregulated in different types of cancers, e.g., head and neck cancer, prostate cancer, glioblastoma, ovarian cancer, colon cancer and so forth [3, 6, 18-22]. Particularly, data from Yang's study showed that FKBP4 was significantly upregulated in majority of BC cell lines [5], but its expression status and prognostic merit in LABC still remains unclear. In light of these previous studies, we conducted this research to assess the clinical and molecular regulatory importance of FKBP4 in LABC.

The mRNA expression of FKBP4 co-expressed genes in malignant tumors (Oncomine database). The graph is a representation of the datasets with statistically significant mRNA overexpression (red) or reduced expression (blue) of TCP1, CCT2, CCT6A, CCT7, STIP1 and HSP90AB1 gene (cancer vs normal). Cell color was determined by the best gene rank percentile for the analyses within the cell, and the gene rank was analyzed by percentile of target gene in the top of all genes measured in each research. 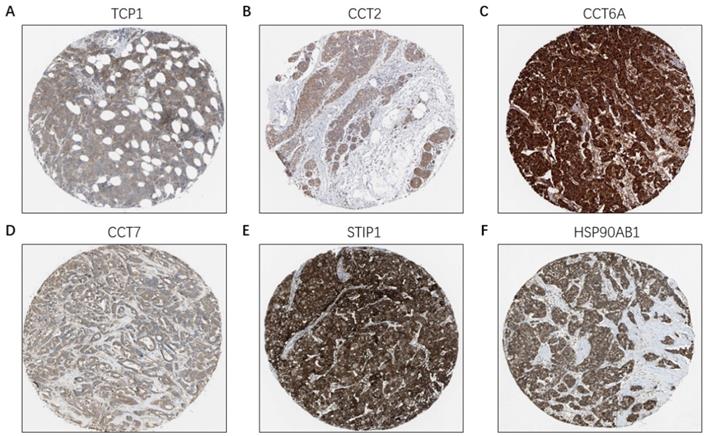 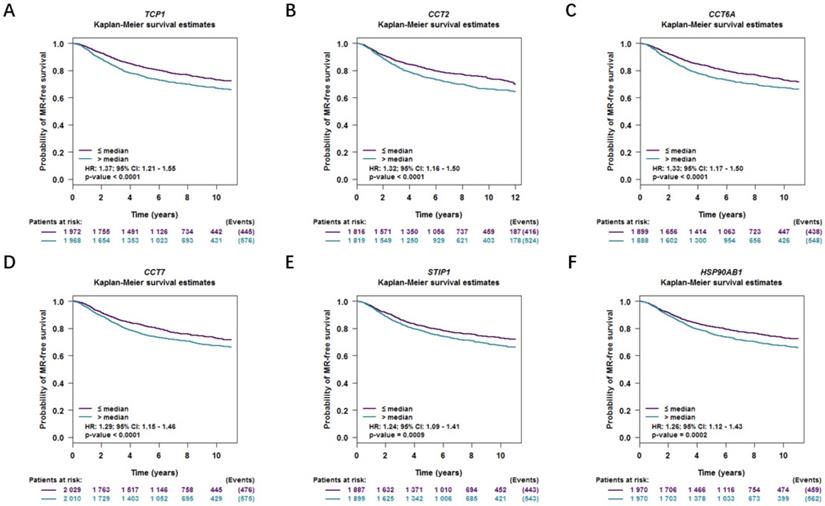 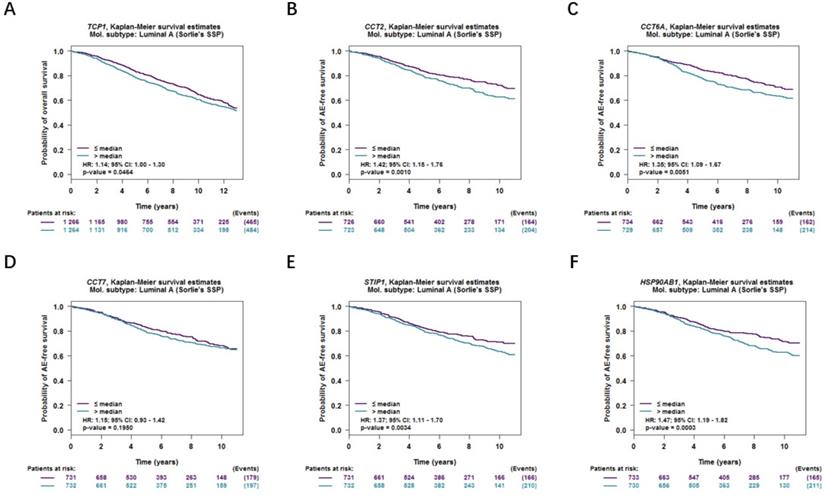 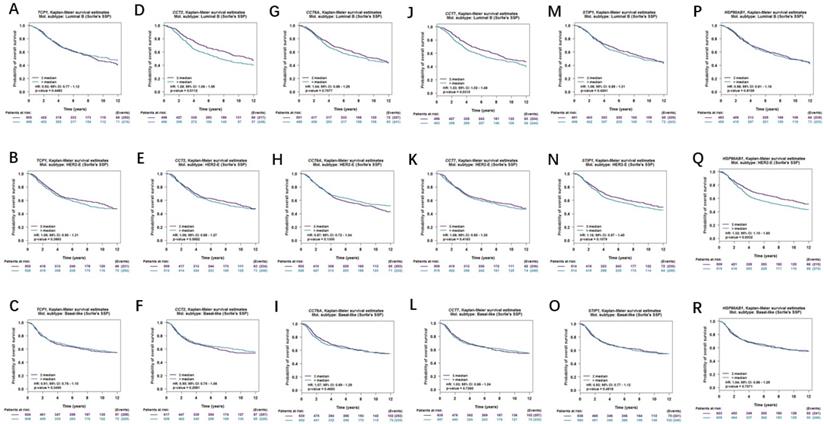 In Oncomine and IHC analysis, we illustrated that both mRNA and protein expression of FKBP4 were significantly upregulated in BC tissues than corresponding normal tissues. Then, we detected that FKBP4 high expression in BC significantly correlated with positive nodal status (p=0.0165), ER (p<0.0001) and PR (p=0.0004) status. As for the molecular subtype, the highest expression of FKBP4 was found in luminal B subtype but irrelevant to HER-positive subtype, which suggested FKBP4 might play an indispensable role in ER and PR signaling pathway.

We then used bc-GenExMiner v4.2 database to elucidate that upregulated mRNA expression of FKBP4 was associated with unfavorable survival for all BC patients, and only correlated to worse survival in LABC patients when considering different receptor subtypes. Since ER and PR played pivotal roles in the development and progression of LABC [23], meanwhile FKBP4 chaperonin HSP90 promoted tumor progression by enhancing various oncogenes [24], more researches are warranted to find out whether FKBP4 influences the ER or PR status via HSP90 or they perform collectively toward the prognosis in the BC setting.

Among the co-expressed genes of FKBP4, a total of six co-expressed genes, TCP1, CCT2, CCT6A, CCT7, STIP1 and HSP90AB1, were finally focused. TCP1, CCT2, CCT6A, CCT7 are all belong to the chaperonin containing TCP1 complex (CCT) [26]and STIP1 is an adaptor protein that coordinates the functions of HSP90AB1[27]. CCT family members overexpression have been reported involved in gene expression and regulation of various carcinomas [28-32]. STIP1 and HSP90AB1 are found associated with cell metastasis, apoptosis and other oncogenic functions in human cancer cells [33]. In our study, higher expressions of six co-expressed genes were all significantly increased in LABC compared to adjacent healthy controls. Moreover, they were all correlated with a shorter survival time in LABC patients. Therefore, we speculate that these co-expressed genes might also similarly interact with each other via various signaling pathways in LABC. The mechanisms and functions between FKBP4 and co-expressed genes remain elusive and need to be validated, thus promoting the development of efficient therapeutic strategies in LABC in the future.

We thank all authors for their critical reading and informative advice during the revision process. We apologize to all researchers whose relevant contributions were not cited due to space limitations.