Methods: A retrospective clinicopathologic review was performed. The receiver-operating characteristic (ROC) curves of LMR, CA125, and COLC predicting mortality in OC patients were constructed. Besides, Kaplan-Meier and Cox logistic regression models were used to plot the survival curves and determine the independent prognostic factors.

Conclusions: LMR alone and combined with CA125 might be used as predictive markers in OC. Furthermore, as a prognostic factor, COLC might have a higher specificity to predict the outcome.

Ovarian cancer (OC) is the deadliest gynecological cancer, and threats women's health significantly [1]. Siegel RL [2] reported that 13,980 OC deaths are projected to occur in the United States in 2019. Although the OC death rate has declined annually [2-4], the prognosis of OC remains disappointing [5-6]. Various studies have identified that biomarkers could have the greatest impact on survival results in prognostication [1, 7].

Cancer antigen 125 (CA125), considered as a tumor-related maker, is a glycoprotein tumor- associated antigen, which exists in the tissues and serum of epithelial ovarian cancer. It is one of the most studied factors in OC, and its role in predicting the prognosis of OC has been evaluated [8-9]. However, it is not widely used in clinic due to its relatively low specificity [7].

As an inflammation-related prognostic factor, the lymphocyte-to-monocyte ratio (LMR) represents the lymphocyte levels divided by the monocyte levels in OC, and it has recently been evaluated for its ability to predict the survival of patients with various solid cancers [10-12]. Researchers have found that LMR might be a prognostic factor of OC [13-14]; however, consensus has not been reached due to inconsistent results of different studies [15].

Consequently, we attempted to evaluate the prognostic ability of LMR combined with CA125 (COLC) to investigate the role of LMR and COLC in predicting progression-free survival (PFS) and overall survival (OS) in OC patients.

A total of 214 patients with OC who underwent initial cytoreductive surgery between January 2006 and December 2016 in the affiliated Nanchong Central Hospital of North Sichuan Medical College were enrolled.

Exclusion criteria were as follows: severe liver and kidney damage, autoimmune diseases, thrombus and hemorrhagic diseases, second malignancies or multiple primary malignancies, infectious diseases in the past 2 weeks, chemotherapy treatment or other anti-tumor treatment and no blood routine examination results within 3 days before surgery.

All of the following data were obtained from medical records: age, BMI, FIGO stage, tumor (histological grade and type), attainment of optimal debulking, whether combined with malignant ascites and lymph node metastases, clinical characteristics (CA125, lymphocyte, and monocyte levels) within 2 days before surgery. Based on previous studies, LMR was defined as the absolute lymphocyte count/the absolute monocyte count [18].

Statistical analyses were performed with SPSS software (ver. 20.0; IBM Corp, Armonk, NY, USA). The optimal cutoff values for LMR and CA125 were determined via the receiver-operating characteristic (ROC) curve, and the OC patients were categorized into two groups according to the optimal cut-off value of LMR and CA125, respectively. The definition of COLC was according to the Glasgow prognostic score (Table 4). The areas under curves (AUCs) were compared using ROC curves calculated for LMR, CA125 and COLC. The ROC was performed with MedCalc software (ver. 15.2.1; MedCalc Software bvba, Ostend, Belgium). The PFS and OS of the 2 groups were compared statistically. Univariate and multivariate Cox regression analyses were used to analyze the factors that might affect PFS and OS in OC patients. Differences in survival among classification groups were analyzed using Kaplan-Meier curves and log-rank tests. A two-sided P value < 0.05 was considered statistically significant.

A total of 214 OC patients were identified. Their median age was 50 years (range: 20-88 years). The majority histologic subtype and grade of OC patients were serous and G3 (both n = 146, 68.2%), and there were 101 people (47.2%) were classified into Federation of Gynecologists and Obstetricians (FIGO) stage Ⅲ at initial diagnosis. The mean duration of follow-up was 64 months (minimum 8 months, maximum 116 months). In this cohort, 135 cases died (63.1%); and the median PFS and OS were 20 months and 39.5 months (table 1), respectively. The baseline characteristics of all OC patients are listed in table 1.

ROC Curves of the LMR and CA125

The Capacity of the Prognostic Value of COLC in OC 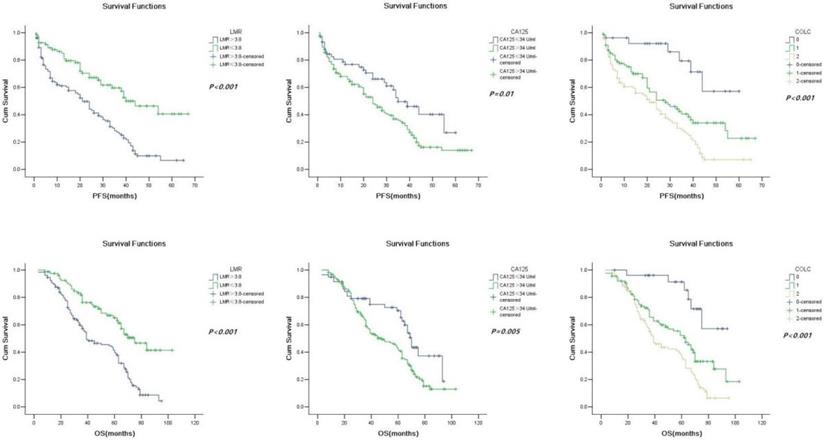 The present study reported that inflammation- related factors, LMR is associated with the survival results of OC [13-15]; however, consensus has not yet been reached. In our study, the cutoff value of LMR to predict the mortality of OC was close to that in the study by Zhang W [13], which indicated that LMR might be used as a reference to evaluate the outcome of OC. Besides, to further evaluate the prognostic value of LMR in OC, univariate and multivariate Cox regression analysis were performed, and the results showed that low LMR was an independent predictive factor of poor PFS and OS in OC. Furthermore, we recommended COLC to predict the survival results of OC to improve the accuracy. COLC achieved a higher AUC and specificity than LMR or CA125, indicating that COLC might have a higher specificity to predict the outcome.

On the one hand, this study provides further support for the proposition that elevated preoperative low LMR is associated with poor prognosis in OC patients. LMR has the potential to be widely used for its easier to measure, low price, and strong practicability. However, the potential mechanisms underlying the prognostic capacity of LMR have not yet been clarified. We tried to explain the mechanism. Firstly, a series of studies have proven that lymphocytes play an important role in immunologic surveillance and tumor immunoediting. They can induce tumor cell apoptosis, and inhibit tumor cell proliferation and migration [19-20]. Lymphocytes enter into the tumor microenvironment and evolve into tumor-infiltrating lymphocytes [21]. Therefore, OC can achieve an antitumor immune reaction [22]. Secondly, monocytes are derived from chemokines and cytokines of inflammation; they could be recruited to the tumor microenvironment by tumor-derived CCL [23], and they play a role in promoting tumor progression [24]. Besides, inflammation can cause monocytes to be transferred from the bone marrow to the peripheral blood [25], and induce the differentiation of monocytes into tumor-associated macrophages (TAMs) [26]. TAMs express tumor necrosis factor (TNF)-α and interleukin (IL)-6, which ultimately induce the development of epithelial-mesenchymal transition (EMT) [27] to play a pro-tumor inflammatory action, promote the formation of blood vessels and lymphatics, promote the growth and metastasis of tumors, and suppress the immune response [27-28]. Thirdly, high value of monocytes/TAMs can promote solid tumor progression and metastasis [29]. In short, LMR represents the balance of lymphocyte and monocyte levels in OC. In other words, it can represent the balance between the anti-tumor immune reaction and the pro-tumor inflammatory reaction. Low LMR represents the decreased lymphocyte counts and the increased monocyte counts in blood and tumor stoma, results in a weakened anti-tumor immune reaction and a strong pro-tumor inflammatory reaction [30-31]. Thus, a low LMR would be associated with favorable tumor progression, which results in a poor prognosis.

On the other hand, similar to numerous studies [7-9], our study proved that CA125 was associated with the prognosis of OC. The probably mechanisms are as follows: CA125 can reverse the suppressive effect of Wnt pathway inhibition on cancer cell migration [9], which results in a poor prognosis; CA125 might play a broad role in humoral immune suppression in cancers by direct binding to a subset of tumor-targeting antibodies and blockade of their immune-effector function[32]; and cancer-derived serum CA125 possesses a unique and distinctive postprandial pattern; thus, postprandial increase in serum CA125 is a surrogate biomarker for early prognostic assessment of OC [9]. However, as reported by Shen Y [7], the specificity of CA125 as a prognostic factor was relatively low. Therefore, we recommended the combination of CA125 and LMR (COLC). Our results showed that the AUC and specificity of COLC were higher than that of LMR or CA125 to predict the mortality in OC; thus, implying that COLC might improve the accuracy in predicting the outcome. As a new biomarker, we infer that COLC might reflect the balance of the anti-tumor immune reaction and the pro-tumor inflammatory reaction, play a role in immune surveillance, and provide novel approaches and strategies for prognosis evaluation of OC.

To our knowledge, our study is the first attempt to evaluate the role of COLC in OC patients. Nevertheless, it showed that the AUC of LMR was higher than that of CA125. The following factors may have influenced the survival results. Firstly, the study was a retrospective, single-center research institute with a relatively small sample size, but we plan to enroll more OC patients in the validation for more definite results through multi-center, randomized research institutes. Secondly, LMR is a non-specific inflammatory marker, which is affected by patients with inflammation, immune system diseases, and combined with other tumors. However, in this study, we allowed a short time interval for blood collection to exclude any possible treatment or drug interference in the results. Another limitation of this study was the inevitable error in measurement and selection. However, we strictly followed the standards and regulations, and we verified the questionable experimental data if necessary.