Gastric cancer (GC) exhibits a poor prognosis due to extensive invasion and lymphatic metastasis in the advanced stage. In this study, we firstly found that the expression of miR-204-5p markedly decreased in GC patients' tissue and serum, especially in GC with lymphatic metastasis. And ROC analysis showed miR-204-5p also served as a predicted factor for the lymphatic metastasis of GC. CXCL12 and CXCR4 were predicted and confirmed as the functional targets of miR-204-5p by Targetscan analysis, dual luciferase assay and western blotting analysis. In addition, we further determined that miR-204-5p suppresses migration and invasion in GC. This finding elucidates new functions and mechanisms for miR-204-5p in GC development and provides a new potential diagnostic marker and therapeutic targets for GC.

Gastric cancer (GC) is a major public health problem, ranking the fourth most frequently diagnosed cancer and the second in cancer-associated death worldwide [1]. Although the diagnosis and treatment of GC have been improved, the 5-year overall survival rate of GC remains poor, largely due to diagnostics in advanced stages [2,3]. Extensive invasion and lymphatic metastasis are the main biological characteristics factors responsible for the poor prognosis of advanced stages of GC patients [4,5]. Therefore, elucidation of the mechanisms underlying GC invasion and metastasis will provide essential clues to understand GC pathogenesis.

Currently, accumulating evidence demonstrated that microRNAs (miRNAs), as a class of endogenous noncoding short RNA serve as oncogenes and onco-suppressors in diverse human carcinogenesis including GC [6-9]. Many of them are associated with crucial biological processes, such as cell proliferation, metastasis, and invasion, by regulating relevant targets gene expression at post-transcriptional levels. For example, miR-589 markedly promotes GC metastasis and invasion via an atypical miR-589-LIFR-PI3K/AKT-c-Jun feedback loop [10]. miRNA-21 promotes the growth of gastric cancer cells by adjusting and controlling PEG2 [11]. Similarity, previous expression profiling data uncovered that as an onco-suppressors, miR-204-5p significantly downregulated in GC tissue [12-14]. It plays an important role in regulating metastasis, promoting cell apoptosis, and inhibiting cell proliferation [15-17]. However, the potential role for miR-204-5p in lymphatic metastasis of GC has yet to be examined. Therefore, in the present study, the molecular mechanism underlying miRNAs regulating lymphatic metastasis of GC was investigated.

Data of the patients in this study

The detection of miR-204-5p expression levels in the plasma samples referred to the previously established method [18]. Briefly, all plasma samples were thawed on ice and 200 µl of each sample was transferred to a tube containing 750 µl TRI Reagent BD (Molecular Research Center, Inc., Cincinnati, USA) and 20 µl 5 mol/l acetic acid. Five microliters of synthetic C. elegans miRNA cel-miR-39 (50 pmol/l, synthetic RNA oligonucleotides synthesized by Qiagen) was spiked into each sample as a control after initial plasma denaturation for RNA isolation. Each obtained total RNA pellet was re-suspended in 40 µl of nuclease-free water and stored at -80 °C. Then a 2 µl aliquot was taken from the 40 µl solution of re-suspended total RNA (equivalently to the RNA extracted from 10 µl of plasma) was reverse transcribed by TaqMan MicroRNA Reverse Transcription Kit (ThermoFisher). Then, 2 µl of the cDNA solution was amplified in a final volume of 20 µl using TaqMan Universal Master Mix (ThermoFisher). Levels of mature miR-204-5p (Assay ID 000508) were measured using TaqMan MicroRNA Assay (ThermoFisher) by normalizing to the levels of control cel-miR-39(Assay ID 000200).

For the detection of miR-204-5p expression levels in the tissues, total RNA was extracted using the mirVana miRNA isolation kit (Ambion). Levels of mature miR-204-5p (Assay ID 000508) were measured using TaqMan MicroRNA Assay (ThermoFisher) by normalizing to the levels of control U6 (Assay ID 001973).

The human GC cell lines SGC7901, MGC803 were purchased from the Cell Bank of the Chinese Academy of Sciences. Cells were incubated at 37 °C in a humidified atmosphere containing 5% CO2 and cultured in DMEM (Gibco, ThermoFisher Scientific, Inc., Grand Island, NY, USA) combined with 10% fetal bovine serum (FBS). miR-204-5p mimics were purchased from QIAGEN. For transient transfection of cells in six-well plates, 100 uM mimics was added with lip2000 in OPTI-MEM media (Gibco; ThermoFisher Scientific, Inc) according to the manufacturer's instructions.

The effects of miR-204-5p overexpression on the CXCR4 and CXCL12 activity were measured by dual-luciferase reporter assays. The plasmids of the wild-type (3'UTR-W) and corresponding mutant-type (3'UTR-M) containing CXCR4 and CXCL12 3'UTR cDNA were constructed based on the pGL3 vector (Promega Corp., Madison, WI, USA; GenBank® Accession Number U47296, Catalog number selected: E1741). The 293T cells were con-transfected with the miR-204-5p mimics or negative control (Nc) and the plasmid 3'UTR-W and 3'UTR-M of CXCR4 or CXCL12. After 24 h, the dual-luciferase assays were performed using the dualluciferase reporter assay system (Promega, Madison, WI, USA) with a Victor X machine (PerkinElmer, Norwalk, CT, USA).

The whole cell protein was extracted using RIPA buffer combined with protease inhibitor (Merck Millipore). The protein concentration was determined by the Bradford method (Beyotime, Shanghai, China). Protein was separated by 10% SDS/PAGE (Beyotime) and transferred to polyvinylidene fluoride membrane (Merck Millipore). The members were blocked in 5% skim milk with TBST for 1 h at room temperature. Then, the primary antibodies were incubated at 4 °C overnight and secondary antibodies for 1 h at room temperature. The primary antibodies used were mouse anti-GAPDH (Sigma, USA), rabbit anti-CXCR4 and rabbit anti-CXCR12 (Proteintech, Rosemont, IL, USA).

Migration and invasion were performed to determine the migratory ability and invasiveness of enforced expression of miR‑204‑5p. For the cell scratch-wound assays, cells were grown in six-well plates until confluent. A wound was generated on the surface of the resulting cell monolayer via scraping with the 10-uL tip of a pipette. After that, the cells were incubated for 12-48 hours. The cells in the wounded monolayer were photographed at different time points, and cell migration was assessed by measuring gap sizes in multiple fields. For the Boyden chamber assay, 24-well tissue culture plates with 12 cell culture inserts (Millipore) were used. Each insert contained an 8-um-pore-size polycarbonate membrane with a pre-coated thin layer of a basement membrane matrix (ECMatrix for the invasion assay). Ten percent fetal bovine serum-containing medium was placed in the lower chambers to act as a chemoattractant. Cells (5×104) in a 300-uL volume of serum-free medium were placed in the upper chambers and incubated at 37 °C for 48 hours. Cells on the lower surface of the polycarbonate membrane were stained, counted, and photographed under a microscope.

Statistical analysis was performed using the SPSS version 17.0 software package (IBM Corp., Armonk, NY, USA). Each experiment was repeated at least three times. Independent sample Student's t-test was used if the quantitative data between groups show normal distribution. If not consistent with the normal distribution, uses the Wilcoxon-Mann-Whitney test. A two-tailed χ2 test or the Fisher exact test was performed to determine the significance of enumeration data. A p-value ≤0.05 was considered statistically difference. 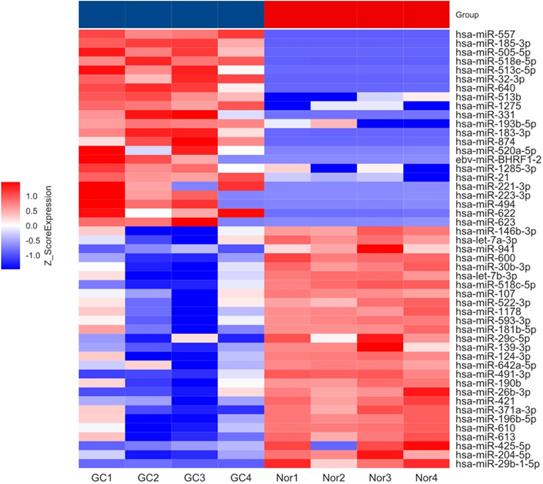 The relationship between miR-204-5p expression and clinicopathological characteristics was investigated in this study. As shown in Table 2 and Figure 3A&B, the expression of miR-204-5p both in GC patients' serum and tumor tissues were significantly associated with lymph node (LN) metastasis and clinical stage. The ROC analysis showed the expression of miR-204-5p both in serum and tissue can be used to distinguish LN metastasis from without LN metastasis patients (AUC for serum=0.71, AUC for tissue=0.83, Figure 3C, D). These results indicated that miR-204-5p was a negative effect on the lymph node metastasis of patients with GC. 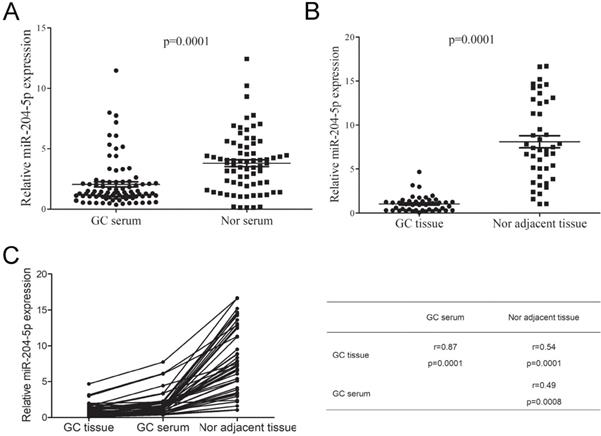 To determine the effect of the miR-204-5p expression on GC migration and invasion, miR-204-5p mimics were transfected in SGC7901 and MGC803 cells. We had wounded the transfected cells via scratching and maintained them for at least 48 hours. The results demonstrated that enforced expression of miR-204-5p strongly inhibited the flattening and spreading of SGC7901 and MGC803 cells (Figure 5A). Similarly, transwell assays revealed that the invasiveness of miR-204-5p mimics-transfected cells were much lower than those of control cells (Figure 5B). Taken together, these results further confirmed the tumor suppressor role of miR-204-5p in metastasis of GC.

Metastasis is a critical factor contributed to cancer mortality for patients at the advanced stage [19]. In GC patients, amounting reports have revealed that LN is the main issue of metastatic destinations and patients with LN metastasis means the poor outcome [20,21].Therefore, inhibition of LN metastasis could be an effective therapeutic approach to improve GC patient's prognosis. In this study, we report that miR-204-5p expression markedly decreased GC patient's serum and tissue. The thorough analysis indicates that lower expression of miR-204-5p was positively associated with LN metastasis. Then, the underlying molecular mechanism of miR-204-5p in GC was further investigated. We discovered that both CXCR4 and CXCL12 genes were the direct targets of miR-204-5p. Furthermore, Vitro biological function experiments also revealed that miR-204-5p had a potent tumor suppressor role in migration and invasion inhibition. All of these findings were strongly indicate that miR-204-5 act as a metastasis suppressor in GC and could be a potential therapeutic target for the treatment of GC. 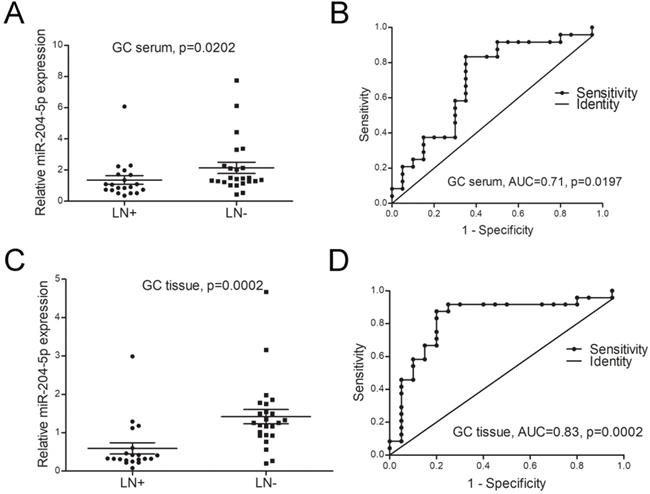 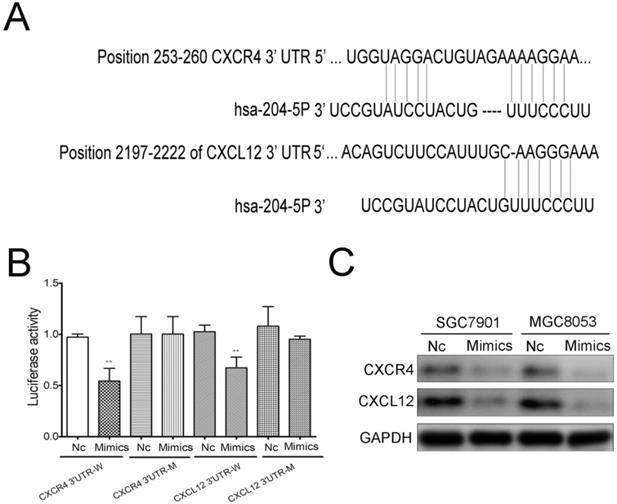 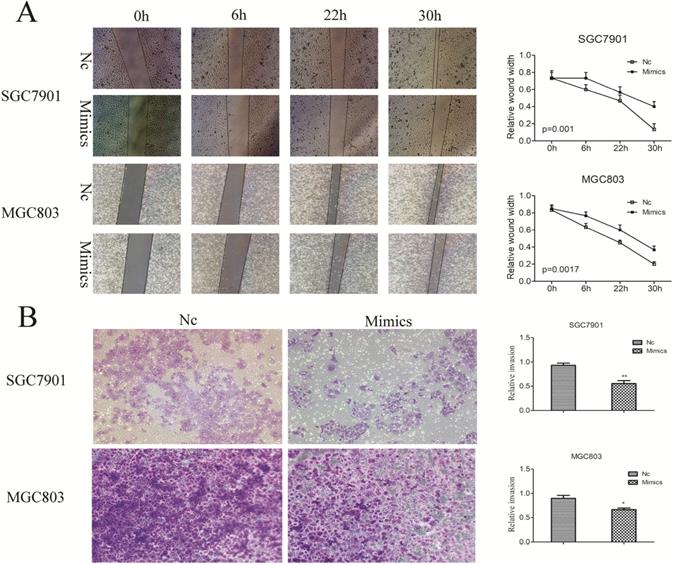 To further elucidate the target mRNAs of miR-204-5p regulation that contributed to the suppressive role of GC metastasis, complementary sequence of miR-204-5p is identified in the 3'-UTR of Chemokine ligand 12 (CXCL12)/chemokine receptor 4 (CXCR4) mRNA by Targetscan. Previous studies have shown the CXCL12/CXCR4 axis is positively associated with the aggressive phenotypes of GC [27-30]. Further study revealed that CXCL12 and CXCR4 protein expression is increased in GC tissue with lymph nodes (LN) metastatic and mainly expressed in metastatic lymph nodes [31,32]. CXCR4 is essential for metastatic spread to organs where CXCL12 is expressed [33,34]. Compared with tissue without CXCR4 expression, CXCL12 attracts the organ-specific metastasis of CXCR4 expressing tumors, lead to more aggressive behaviors. And blockage of CXCL12 and CXCR4 could inhibit GC cells growth and invasion [35]. In our current study, miR-204-5p was found as a regulator of CXCL12 and CXCR4 expression. Enforced expression of miR-204-5p could lead down-regulation of CXCR4 and CXCL12 expression in both mRNA and protein levels in GC cells. These results suggested that miR-204-5p involved in the post-transcriptional regulation of CXCR4 and CXCL12 expression in GC.

Next, we investigated the biological function of miR-204-5p in GC cells. Restoring miR-204-5p strongly inhibited the migration and invasion of GC cells. These data further confirmed that the low expression of miR-204-5p critically contributed to the metastasis of GC.

Conclusion, our clinical and experimental evidence strongly support that miR-204-5p act as a tumor suppressor in GC by targeting CXCR4 and CXCL12, thus regulating invasion and migration. Low levels of miR-204-5p significantly associated with LN metastasis of GC. Thus, miR-204-5p may be a potential molecular target to control metastatic GC.

Jun Gao and Shuixiang He are the co-corresponding authors, and Juan Zhang and Ling Xing are equally contributing authors.

20. Marchet A, Mocellin S, Ambrosi A, Morgagni P, Garcea D, Marrelli D. et al. The ratio between metastatic and examined lymph nodes (N ratio) is an independent prognostic factor in gastric cancer regardless of the type of lymphadenectomy: results from an Italian multicentric study in 1853 patients. ANN SURG/8569. 2007;245(4):543-52