Intrahepatic cholangiocarcinoma (ICC) is an aggressive and poorly understood biliary malignancy that is frequently diagnosed at advanced stages, which limits its treatment options [1]. In recent years, the incidence and mortality of ICC has drastically increased with geographic variation [2,3]. Furthermore, the long-term survival of patients with unresectable ICC is dismal, with less than 5% to 10% of patients surviving at 5 years after the diagnosis [2,4]. Surgical resection remains the only approach with curative intent, achieving a 5-year survival rate of approximately 20% at early T1-T2 stages; Still worse, in sharp contrast to the use of standard therapies for patients with advanced lung/breast/colorectal cancers and hepatocellular carcinoma, systemic chemotherapy and molecular-targeted therapies have had limited success in treating ICC [5]. Therefore, it is imperative to fully elucidate the mechanisms responsible for ICC carcinogenesis and progression, as they may provide novel and effective strategic approaches to improve the prognosis of ICC patients.

Recently, microRNAs was shown to implicated in controlling multiple steps of ICC onset and progression [6]. Aberrant expression of the miR-129-2-3p has been detected in multiple types of carcinoma, yet its expression and potential biologic role in ICC has not been investigated [7-9].

Wip1 (also known as PPM1D) is a monomeric serine/threonine phosphatase of the PP2C family, and its expression is increased after DNA damage, which inactivates p53 and promotes termination of the DDR pathway [10,11]. Wip1 dephosphorylates many proteins, including ataxia-telangiectasia mutated (ATM), Chk1, Chk2, p53, p38 and Mdm2 [10]. These proteins that belong to DNA damage response markers are often decreased in DNA damage response pathways, which contribute to tumor progression. Others and our previous studies showed that Wip1 were over expression in a wide range of tumor tissues including kidney [12], breast [13], lung [14], ovarian [15], neuroblastoma [16]. Our previous research showed that Wip1 was highly expressed in ICC tissues and cell lines and may be a key regulator in the tumorigenicity and invasion of human ICC [17,18]. However, the potential mechanism is unknown. In current study, we decided to investigate the effects of miR-129-2-3p in ICC and have demonstrated that miR-129-2-3p could inhibit cell invasion and migration via Wip1 in ICC.

Transfected cells were plated into 96-well plates at a density of 3×103 cells per well. Five replicate wells were used for every group. After culture for 0, 24, 48, and 72 h, CCK-8 assay was carried out by inoculating 10 μL of CCK-8 reagent (Dojindo Molecular Technologies, Inc., Kumamoto, Japan) into each well. Cells were incubated at 37 °C with 5% CO2 for additional 2 h, and the absorbance in each well was measured using a spectrophotometric plate reader (Infinite® 200 PRO; Tecan Group, Ltd., Mannedorf, Switzerland).

Transwell chamber (Costar™; Corning, Inc., Corning, NY, USA) precoated with Matrigel (BD Biosciences, San Jose, CA) was applied to assess the cellular invasive capacity. In detail, the transfected cells were harvested after 48 h of incubation and then suspended in FBS-free DMEM medium. In total, the upper chambers were filled with 200 μL suspension containing 5 × 104 cells, while the bottom chambers were added with 500 μL of DMEM containing 20% FBS. After incubation for 24 h, the cells that invaded through the membrane were fixed with 4% paraformaldehyde and stained by 0.5% crystal violet. Finally, the non-invaded cells were cleared, and the invaded cells were photographed under an inverted microscope (Olympus IX83; Olympus Corporation, Tokyo, Japan). Five random fields of each chamber were selected for quantification.

TargetScan 7.1 (http://www.targetscan.org/) and miRanda (http://www.microrna.org) were employed to search for the putative targets of miR-129-2-3p. The 3'-UTR regions of human Wip1 gene containing the predicted wild-type (wt) or mutant (mut) miR-129-2-3p binding sites were synthesized by Shanghai GenePharma Co., Ltd. The 3'-UTR fragments were then inserted into the pMIR-REPORT vector (Promega, Madison, WI, USA) to generate the reporter plasmids, pMIR-Wip1-3'-UTR-wt and pMIR-Wip1-3'-UTR-mut. Luciferase reporter assay was performed as follows: cells were inoculated into 24-well plates, then co-transfected with miR-129-2-3p mimics or miR-NC and pMIR-Wip1-3'-UTR-wt or pMIR-Wip1-3'-UTR-mut, using Lipofectamine 2000. Following 48 h incubation, transfected cells were collected, and the luciferase activity was determined using a dual-luciferase reporter assay system (Promega, Madison, WI, USA). The firefly luciferase activity was normalized to Renilla luciferase activity.

All the data were expressed as mean values ± standard deviation, and subjected to Social Sciences (SPSS) version.16.0 (SPSS, Inc., Chicago, IL, USA) for data analysis. Student's t-test was used to compare the difference between two groups. Comparison among multiple groups was performed using a one-way analysis of variance (ANOVA) test followed by a Bonferroni's post hoc test. The correlation between miR-129-2-3p and clinicopathological characteristics in ICC patients was assessed using chi-square test. Spearman's correlation analysis was adopted to analyze the correlation between miR-129-2-3p and Wip1 mRNA levels in ICC tissues. The differences were defined as statistically significant if P value less than 0.05.

To explore the functions of Wip1 in OS, si-Wip1 was utilized to silence endogenous Wip1 expression in QBC-939 and RBE cells. The protein level of Wip1 was evidently silenced in QBC-939 and RBE cells after si-Wip1 transfection, as revealed by western blot analysis (Figure 4A, P<0.05). The results of CCK-8 and transwell cell invasion assays indicated that the proliferation (Figure 4B, P<0.05) and invasion (Figure 4C, P<0.05) of QBC-939 and RBE cells was suppressed after Wip1 depletion. Consequently, silencing Wip1 expression exhibited similar effects as miR-129-2-3p overexpression in ICC cells, further suggesting Wip1 as a function target of miR-129-2-3p in ICC cells.

To further clarify whether decreasing Wip1 expression by miR-129-2-3p upregulation was responsible for the restriction of ICC cell proliferation and invasion, we restored Wip1 expression in miR-129-2-3p overexpressing-QBC-939 and RBE cells via cotransfection with Wip1 overexpression plasmid pCMV-Wip1 (Figure 5A, P<0.05). In addition, functional experiments revealed that the inhibitory effects of miR-129-2-3p upregulation in QBC-939 and RBE cell proliferation (Figure 5B, P<0.05) and invasion (Figure 5C, P<0.05) were partially rescued by Wip1 restoration. In summary, Wip1 is a downstream mediator in the tumor suppressive roles of miR-129-2-3p in ICC cells. 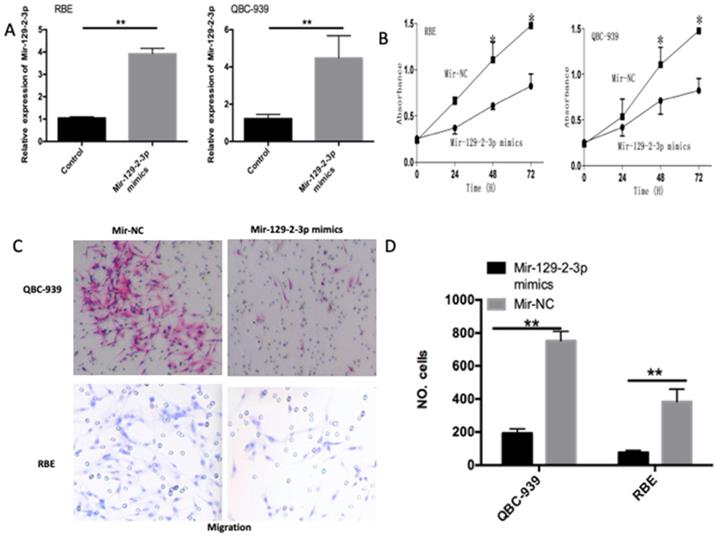 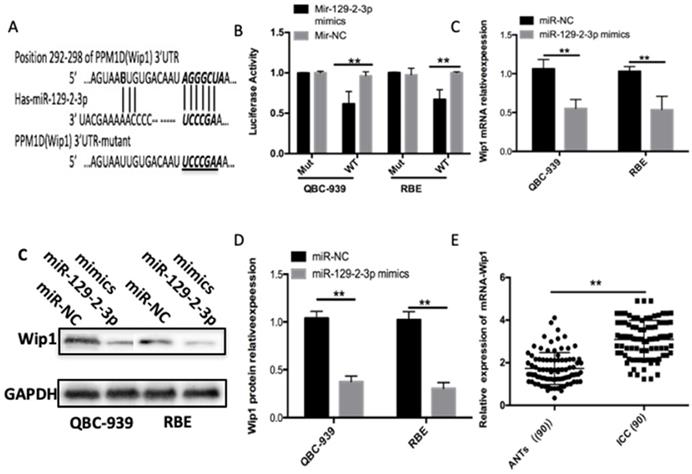 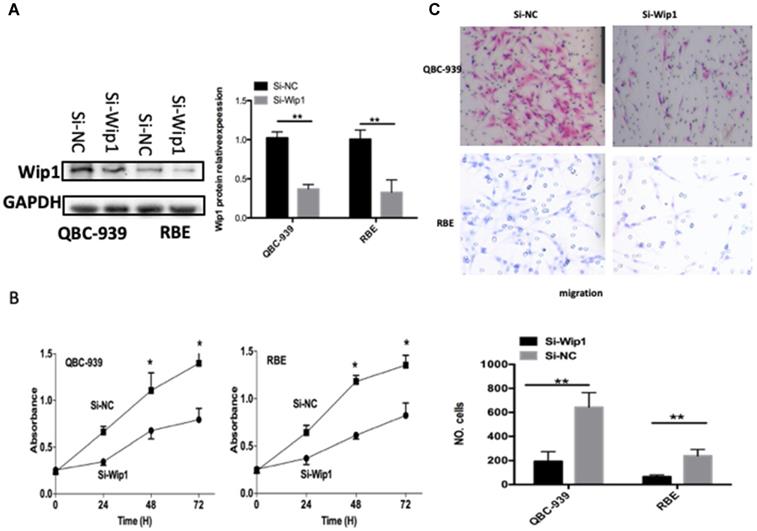 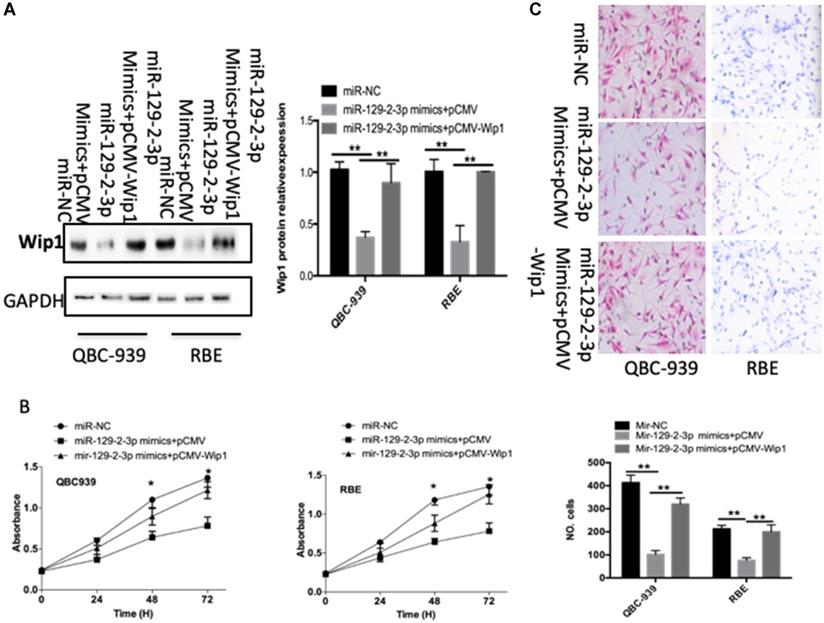 Intrahepatic cholangiocarcinoma (ICC) is the second most common primary hepatic malignancy with poor prognosis [17, 20]. Despite improvements in its diagnosis and therapy, the prognosis for ICC patients remains poor. An improved understanding of ICC tumorigenicity and consequential identification of novel therapeutic targets would improve the prognosis of ICC patients [17]. MicroRNAs (miRNAs) are a class of highly conserved, small endogenous non-coding RNAs that regulate gene expression at the posttranscriptional level and participate in important cellular processes, including development, apoptosis, proliferation, differentiation, metabolism [9,21]. Several studies have demonstrated downregulated expression of miRNAs in ICC tissues and cell lines, in which these miRNAs exert important roles in ICC apoptosis, cell proliferation, invasion and migration [9,21]. In this paper, we elucidate the potential role of miR-129-2-3p in the pathogenesis of ICC and investigate the possibilities of using miR-129-2-3p as diagnostic and prognostic marker, as well as therapeutic target in ICC. 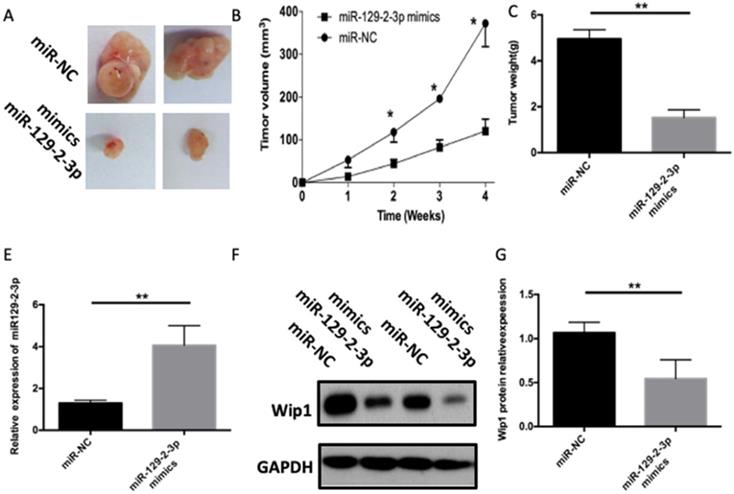 The miR-129 family includes two precursors miR-129-1 and miR-129-2 which are processed to three mature miRNAs, miR-129-5p, miR-129-1-3p and miR-129-2 [21]. Few studies have investigated the roles of the miR-129 family members in cell proliferation and metastasis in ICC. Dual functions for miR-129, as a tumor suppressor and oncogene, have been confirmed in various types of carcinomas. miR-129-5p has been reported to be downregulated in neuroendocrine tumors, prostate cancer, lung cancer and gastric cancer and functions as a tumor-suppressor role in these carcinomas [22-24]. Epigenetic regulation of miR-129-2 was demonstrated in glioma and lung cancer [25,26]. In contrast, however, miR-129 is also upregulated in several solid tumors and non-cancerous tissues from cancer patients with lymph node metastases [27-29].

Our previous findings indicate that Wip1 is involved in the tumorigenicity and invasion of human ICC at least in part through the MMP-2 signaling pathway [17]. Our further data show that both iNOS and Wip1 promote ICC cell migration and invasion by up-regulating MMP expression [18]. To evaluate the underlying mechanism, we find miR-129-2-3p directly targets wip1 to suppress the proliferation and invasion of intrahepatic cholangiocarcinoma.

Wip1, located on chromosome 17q22-q23, acts as an oncogene and inhibits p53 activity when expressed at high levels along with oncogenes [30]. These features are mainly connected with Wip1 ability to regulate DNA damage response (DDR) signaling and MAPK kinases pathway p53 network, including p38, p53, ATM, Chk2, and γ-H2AX [10,31,32]. Accumulating studies identified that high Wip1 expression disrupted the homeostasis maintained by the p38 MAPK-p53-Wip1 pathway, which caused downstream Wnt-p53 inactivation through p38 MAPK dephosphorylation, and promoted the development of malignant in humans by reducing p16 protein levels [33,34]. Our previous data have indicated that Wip1 is oncogenic and is involved in invasive growth in renal cancer cells and ICC cells [12,17]. Our data also show Wip1 involved in the tumorigenicity and invasion of human ICC in part through the MMP-2 signaling pathway [17]. In this study, we found that miR-129-2-3p was the upstream regulator of Wip1.