Aim: Osteosarcoma is one of the most prevalent primary bone malignancies in children and adolescents. Magnetic resonance imaging (MRI) has been considered a very critical tool to provide anatomical information of tumor and surrounding main blood vessels. To evaluate the prognostic significance of the radiological vascular involvement according to the pre-treatment MRI in patients with Enneking IIB osteosarcoma.

Methods: In this retrospective study, we included 482 patients younger than 50 years old with Enneking IIB primary osteosarcoma of the extremities with complete clinical records from 2005 to 2015.Univariate and multivariable analyses were conducted to identify the risk factors for OS (Overall survival) and EFS (Event-free survival). The correlations between the risk factors was performed using Spearman analysis. The Kaplan-Meier method was used to calculate survival curves. Based on the radiological relationship between the tumor lesion and the surrounding reactive area with the main blood vessels as shown on pretreatment MRI findings.

Conclusion: Vascular involvement according to radiological findings from pretreatment MRI is an independent risk factor for cumulative OS and EFS in patients with Enneking IIB primary osteosarcoma of the extremities. The new subtyping based on the relationship between the tumors and surrounding reactive area with the main blood vessels based on pretreatment MRI can predict the prognosis of patients with osteosarcoma and provide certain directive information for selecting the appropriate surgical procedure for individual patients.

Osteosarcoma is one of the most prevalent primary bone malignancies in children and adolescents [3]. Collectively, osteosarcoma usually originates from the metaphysis of long bones, and the distal femur and proximal tibia are the most common sites of osteosarcoma of the extremities, which comprises over 60% of the reported osteosarcoma diagnoses. With the help of long-standing neoadjuvant and adjuvant chemotherapy, the 5-year cumulative survival rate of osteosarcoma has been elevated to more than 60% since the 1970s [22,24,26].

Magnetic resonance imaging (MRI) has been considered a very critical imaging tool to provide anatomical information on patients with osteosarcoma upon initial diagnosis. MRI can depict the relationship between the tumor and adjacent neurovascular bundles and the surrounding reactive area [10,34]. Radiological vascular involvement detected by MRI is a risk factor for the prognosis of soft tissue sarcoma [25]. Pretreatment assessments based on MRI data are useful for surgical decisions in soft tissue sarcoma (STS) [5,12,27].

In this study, we first investigated whether radiological involvement of the main blood vessels assessed by MRI is an important prognostic risk factor of patients with Enneking IIB osteosarcoma. Then, we proposed subtyping of Enneking IIB osteosarcoma of extremities based on the relationship between the tumor lesion and surrounding reactive area with the main blood vessels in the pre-treatment MRI, assess its prognostic significance in osteosarcoma patients and potential guidance in selecting surgical procedure individually.

In this retrospective study, records of 786 patients who were younger than 50 years old at the time of diagnosis and who were newly diagnosed with osteosarcoma and received standard treatment according to National Comprehensive Cancer Network (NCCN) guidelines from January 2005 to December 2015 at our institution are reviewed.

The inclusion criteria were as follows: (1) patients with histologically confirmed (by needle biopsy) primary high-grade osteosarcoma; (2) patients with tumors located in the extremities; (3) patients who did not receive any antitumor therapy before admission to our center; (4) patients with complete clinical, imaging, pathological and follow-up data; (5) patients who received standard treatment [9].

The exclusion criteria were as follows: (1) patients with evidence of underlying diseases such as hypertension, diabetes, cardiac or pulmonary diseases; (2) patients suffering from another type of tumor or secondary osteosarcoma; (3) patients who received specific treatment in other case-control studies; (4) patients with Enneking stage ⅡA or Ⅲ at the time of diagnosis; (5) patients with a Karnofsky performance score<70; (6) patients' age above 50 years old [20].

Diagnoses of osteosarcoma and pulmonary metastasis are based on multidisciplinary factors. X-ray imaging and MRI were performed for local lesions to evaluate tumor size and aggressiveness. A pretreatment needle biopsy of the primary lesion was performed for each patient to confirm the pathological stage of osteosarcoma. Computed tomography (CT) scan of the lung and/or a Positron Emission Tomography-Computed Tomography (PET-CT) scan were also performed to evaluate pulmonary or distant metastasis for osteosarcoma to confirm the Enneking stage. Standard treatment of osteosarcoma involved neoadjuvant chemotherapy, surgery and adjuvant chemotherapy. Four commonly used drugs for neoadjuvant and adjuvant chemotherapy include high-dose methotrexate, cisplatin, doxorubicin, and ifosfamide, which were administered at the interval presented in Figure 1 [33].

Patients were followed up every 3 months for the first and second years, every 4 months for the third year, every 6 months for years 4 and 5, and yearly thereafter. For every follow-up, patient history was taken, and physical examination, X-ray imaging of the lesion site and CT scan of the lungs were performed; PET-CT was performed if potential metastasis or recurrence was noticed.

Distinguishing tumor from the peritumoral reactive area was determined according to Lawrence M's criteria [31]. The maximum diameter of the tumor was defined as the longest diameter of the largest cross-sectional area. The main blood vessels included the main branches of the axillary, brachial, radial, ulnar, femoral, popliteal and posterior tibial artery and vein.

Overall survival (OS) is defined as the time from diagnosis until death from various causes or until the last follow-up visit.

Event-free survival (EFS) is defined as the time from diagnosis until any event related to the tumor, such as local recurrence, distant metastasis, second primary malignancy, death, etc.

SPSS (IBM corp. 22, New York, USA) statistical software was used for statistical analysis. Categorical variables are expressed as numbers and percentages, and the χ2 test was used to compare differences between groups. Continuous variables are presented as the mean (range), and means were compared via ANOVA (Analysis of variance). The correlations between the risk factors were performed using Spearman analysis. Univariate and multivariable analyses were performed to identify the probable prognostic factors. Variables that were found to be significant in the univariate analysis were included in the multivariable analysis with the Cox proportional hazard model. The Kaplan-Meier method was used to calculate survival curves to estimate OS and EFS; differences between the curves were evaluated with the log-rank test. A P-value<0.05 was considered statistically significant. Intra-observer and interobserver agreement were assessed by using the Cohen's kappa statistics. The strength of the kappa agreement was defined as follows: 0.00-0.20 indicated sight agreement; 0.21-0.40 fair agreement; 0.41-0.60, moderate agreement; 0.61-0.80, substantial agreement; and 0.81-1.00, almost perfect agreement.

5-year OS (A) and EFS (B) of vascular involvement of Enneking IIB osteosarcoma of extremities. Blue line indicates uninvolved, green line indicates involved. Involved means MR imaging does not show a rim of normal tissue in the tumor-to-vessel interface (P<0.01). 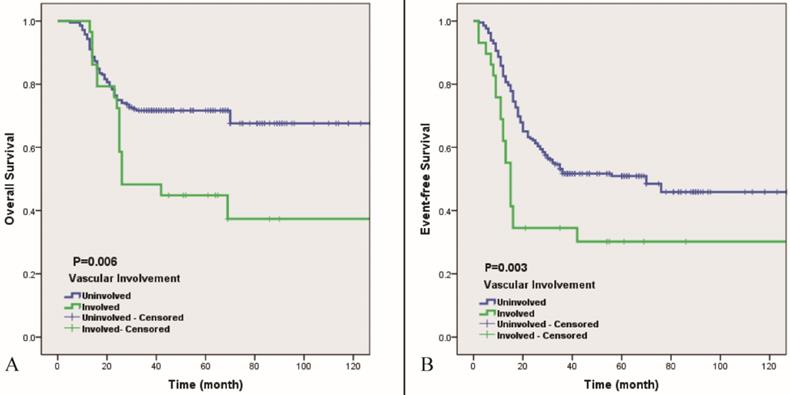 Multivariate analysis of clinical factors for 5-year OS and EFS

Subtyping of Enneking IIB osteosarcoma based on the radiological relationship between the tumor and peritumoral reactive area with the main blood vessel. 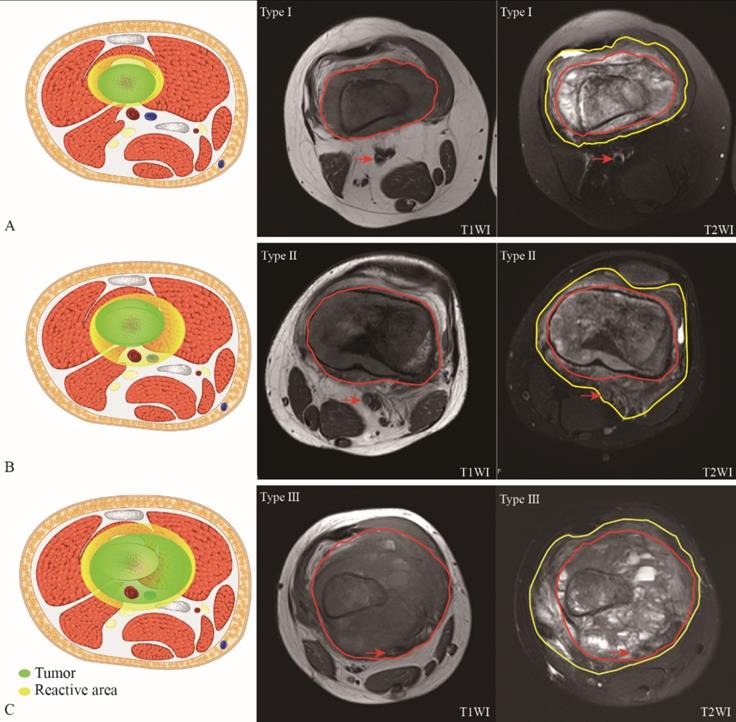 In this study, the overall amputation rate was 19.5% (Table 1). The rates of amputation in the subtypes were 4.3% (type I), 15.8% (type Ⅱ), and 87.5% (type III) (P < 0.01) (Figure 6). One of the type I patients received amputation surgery due to his poor economic condition in which he could not afford high-priced endoprostheses. For the other young type I patient who decided to receive amputation, the patient and family urged amputation because they were worried about the recurrence of the tumor after limb-salvaging surgery. Most type II patients underwent amputation because there was not enough soft tissue to reconstruct after tumor resection. For four type III patients who received limb-salvaging surgery, they all strongly required salvaging the limb. Therefore, we tried to resect the tumor completely and separate the partly adhered main blood vessel while excising the vascular sheath in two patients. For the other two whose main blood vessels were completely encompassed by the tumor lesion, we resected the tumor and the involved main blood vessel and utilized a vascular graft to repair the limbs. 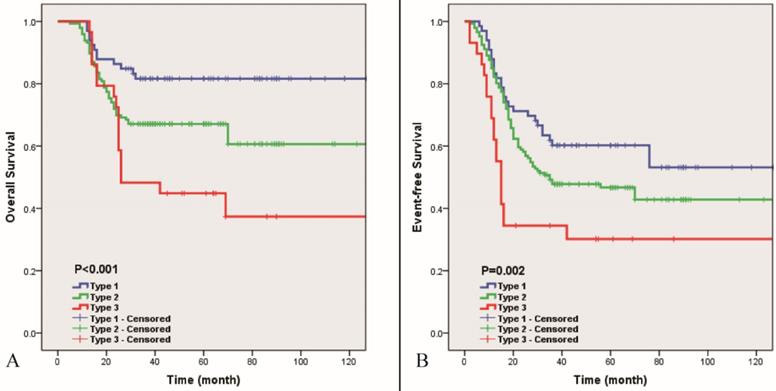 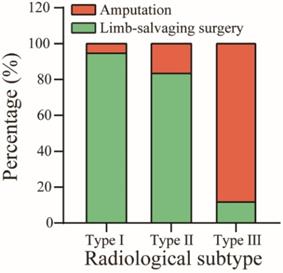 In this study, we investigated the relationships between different types of radiological vascular involvement and survival outcomes for Enneking ⅡB osteosarcoma of the extremities. To date, the Enneking staging system has been widely accepted and applied by musculoskeletal oncologists throughout the world as a standard classification. However, the majority of patients diagnosed with Enneking ⅡB osteosarcoma have variable prognoses. Bacci, G et al [1] demonstrated that pretreatment LDH levels should be considered when deciding on a risk-adapted treatment for OS patients. In addition, Bacci,G et al [2] emphasized that age younger than 14 years, high levels of serum ALP, and inadequate surgical margins should be considered when deciding risk-adapted treatment options for patients with osteosarcoma. Kim, M.S.et al [17] suggested that an 80 mm maximal cutoff is strongly useful for subdividing patients with osteosarcoma. According to the Birmingham classification of osteosarcoma [14], a combination of the recording of surgical margins in millimeters and the response to neoadjuvant chemotherapy is likely to be more accurate and useful than the current MSTS system for Enneking ⅡB osteosarcoma. In addition to these factors, main blood vessel involvement was recently considered to be a critical prognostic risk factor in many types of malignant tumors. Kato, T. et al [15] emphasized that patients with blood vessel invasion had significantly worse recurrence-free survival and overall survival in primary invasive breast cancer with a hazard ratio of 2.1 (P<0.05). In high-grade soft tissue sarcoma, patients with histologically determined vascular involvement had a worse prognosis, and 70% of these patients experienced metastasis, with a 5-year metastasis-free survival of only 28% [25]. Carneiro, A. et al [5] combined tumor size, vascular invasion, necrosis and growth pattern (SING) into a favorable model that could predict the prognosis of soft tissue sarcoma patients with a sensitivity of 74% and a specificity of 85%. Histological vascular invasion is defined as the presence of tumor cells within any space of the vascular wall or within the lumen of blood vessels [5, 11]. On another words, oncologists can only perform these assessments postoperatively. Additionally, vascular involvement is also important for making surgical decisions, such as choosing between limb-salvaging surgery or amputation. Therefore, evaluating the condition of the main blood vessels before surgery is a critical procedure [23,29].

Magnetic resonance imaging (MRI) is an accurate and prevalent imaging modality for depicting tumor lesions, peritumoral reactive area and encroachment of tumors on adjacent neurovascular bundles [25]. Holzapfel, K., et al [13] demonstrated that histological vascular invasion should be highly suspected when the lesion partially or completely covers the main blood vessels on MRI, and when combined with postoperative pathology, it was found that the sensitivity and specificity of MRI in judging whether the tumor was invaded by blood vessels were approximately 84.6% and 97.5%, respectively. The radiological vascular involvement demonstrated on pretreatment MRI in Enneking IIB primary patients with osteosarcoma has predictive ability for 5-year overall survival and event-free survival on both uni- and multivariable analyses. Based on our results, the prognosis of patients with osteosarcoma with tumor lesion involvement of the main vessels on MRI was significantly worse than that of patients without blood vessel involvement. The 5-year OS and EFS of the uninvolved group were 71.7% and 50.9%, whilst those of the involved group were 44.8% and 30.2%, respectively. Therefore, radiological vascular involvement is an independent risk factor of prognosis in Enneking IIB patients with osteosarcoma.

We thank Dr. Zhaohui Zhang and Dr. Lei Ding for assist in design of the study and observing MRI.

The study was granted ethical approval by the Ethical Committee of the First Affiliated Hospital of Sun Yat-sen University, and all the patients provided written informed consent.