Objectives: An increase in the trimethylation of lysine 4 of histone 3 (H3K4me3) has been reported to be involved in the development of several types of tumors. However, the level and role of H3K4me3 in human esophageal cancer (HEC) remain unknown. Here, we assessed the role and clinical significance of H3K4me3 in HEC.

Results: We found that H3K4me3 levels were frequently elevated in HEC tissues compared with adjacent esophageal tissues, and elevated H3K4me3 was significantly associated with poor tumor differentiation (p =1.39×10-5) and advanced tumor stage (p=8.5×10-5). After Ing4 knockdown in HEC cells, we found that the cell proliferation, metastasis, invasion and colony formation abilities were enhanced compared to those in the control cells. Notably, we found that HEC patients with a high level of H3K4me3 exhibited an unfavorable 5-year survival rate compared to those with a low level of H3K4me3 (p=6.8×10-5). The univariate analysis showed that the tumor differentiation, TNM stage, and H3K4me3 level were predictors of the overall survival rate of HEC patients. In the multivariate analysis, tumor stage (p=0.015) and H3K4me3 level (p=0.034) were revealed to be independent parameters for predicting the prognosis of HEC patients.

Conclusions: Thus, high levels of H3K4me3 may be used as a meaningful biomarker for HEC prognosis evaluation.

The occurrence of cancer is a multistep, accumulative process, and cancer is a genetic disease. It is widely accepted that not only somatic mutations but also epigenetic changes contribute to this process; epigenetic changes alter chromatin structure leading to downregulation of gene expression [5]. In fact, epigenetic dysregulation is closely related to tumorigenesis [6, 7], and has recently attracted increasing attention because it is intimately related to metabolic reprogramming, one of the emerging hallmarks of cancer [8]. Epigenetic modifications in cancer mainly include DNA methylation and histone modification. Indeed, histone modification has been identified to regulate a wide range of critical biological processes, such as cell proliferation, apoptosis, and cell cycle [9]. Multiple studies in recent years have demonstrated that changes in histone epigenome are one of the early procedures in oncogene formation [10]. For example, the dysregulation of genome-wide mapping of chromatin had been revealed during cancer initiation and progression due to advances in high-throughput sequencing. The abnormal trimethylation of lysine 4 on histone H3 (H3K4me3) has been found in breast cancer [11], colon cancer [12], pancreatic cancer [13] and is associated with poor prognosis of malignant tumors [14, 15]. Additionally, ING4, the reader of the chromatin H3K4me3, has been identified to a be tumor suppressor gene [16, 17]. Thus, the dysregulation of histone modification plays an important role in cancer.

This study aimed to identify the prognosis value of hypermethylation on histone H3K4 in patients with HEC. First, we assessed the H3K4me3 modification in HEC and matched paratumor tissues. By Ing4 knockdown, the roles of H3K4me3 in HEC was indirectly determined. Finally, the clinical significance of H3K4me3 in HEC was analyzed.

Fifteen HEC tissues were randomly collected from 100 patients by curative resection at the Affiliated Hospital of Hainan Medical University (Haikou, China) and the Second Affiliated Hospital of Nanchang University (Nanchang, China) between January 2005 and January 2006. Samples' collection and preservation is consistent with our previous study [18]. Before surgery, no patients received any form of radiotherapy or chemotherapy, and detailed clinicopathological data were obtained from the patients. The clinical stage of the patients was evaluated by the TNM staging system of the American Joint Committee on Cancer (AJCC) and IUCC (8th edition) [19]. All patients were routinely followed-up with clinical examination and thoracoabdominal CT every six months and with upper gastrointestinal endoscopy at two years. The median follow-up period was 43 months (range, 1-66 months) and the last follow-up was in July 2010. The overall survival (OS) was defined as the time interval between surgery to death or the last visit to the patient. The approval of ethics was approved by the Ethics Committee of the Second Affiliated Hospital of Nanchang University and the First Affiliated Hospital of Hainan Medical University.

Evaluation of immunostaining intensity of TMAs

The positive expression of H3K4me3, which was immunohistochemically stained yellow or brown in the nucleus, was based on the combination of both intensity scores (ranging from 0 to 3 representing no, weak, moderate, and strong staining, respectively) and the percentage of positive tumor cells (0,1≤25%; 2, 25%-50%; 3, 50%-75%; 4, >75%). The combined scores ranged from 0 to a maximum of 7. A cutoff of ≤3 was considered the low H3K4me3level, and higher scores were considered high H3K4me3level.

Genomeditech (Shanghai, China) designed and supplied Ing4-NC and Ing4-shRNA (designs the target shRNA sequence) lentiviruses to us (Table S1). The lentiviral vectors were transfected HEC cells according to the manufacture instructions.

Cell proliferation, colony formation, wound healing and transwell assays were performed according to the manufacturer's protocol and our past reports[20, 21].

Analyses were performed using SPSS 21.0 software (SPSS, Chicago, IL) and PRISM 5.0 (GraphPad Software Inc., San Diego, CA, USA). Values are expressed as the mean ± standard deviation. The Student t test was used for the comparison of H3K4me3 level in HEC and para-cancerous specimens. The relationship between categorical variables and the H3K4me3 level were analyzed by Chi-square (χ2) test. The overall survival (OS) rate of HEC patients was determined by Kaplan-Meier method and log-rank test. A multivariate analysis of the Cox proportional hazard regression model was used to analyze the independent prognostic factors. Beta (regression coefficient) represented the coefficient of low hazards factor compared with the high one. P < 0.05 was regarded as the statistical significance, and * indicates p< 0.05, ** indicates p< 0.01, and *** indicates p< 0.001.

The level of H3K4me3 is elevated in human esophageal cancer tissues

Western blotting and immunohistochemistry were performed to detect the level of H3K4me3 in HEC tissues and matched adjacent non-tumor tissues. The H3K4me3 level was significantly increased in HEC compared with that in corresponding adjacent normal esophageal tissues (1.10±0.24 vs. 0.61±0.16; Fig. 1A). Immunohistochemical analysis demonstrated that the intensity H3K4me3 staining was markedly higher in HEC tissues than in paratumor tissues (Fig. 1B). Overall, the elevated level of H3K4me3 immunostaining was more frequent in tumor tissues (60%, 60/100) than in matched non-tumor tissues (40%, 40/100; Fig. 1B). Immunohistochemically, the H3K4me3 staining was mainly in the nuclear and, to a lesser degree, the cytoplasmic in HEC tissues. The aforementioned results indicate that H3K4me3 may contribute to the onset and progression of HEC.

Association between H3K4me3 and clinicopathological features of HECs

Previously, Ing4 was reported to be a reader of H3K4me3 and broker crosstalk between H3K4 methylation and histone H3 acetylation. Here, we investigated the functions of H3K4me3 by interfering with Ing4 expression. After successfully knockdown of Ing4 expression (Figures 3A-C), we found that the proliferation of ECA109 and KYSE510 was enhanced (Figure 3D). In the colony formation assay, the colonies formed by ECA109-shIng4 and KYSE510-shIng4 cells were more abundant than those formed by ECA109- and KYSE510-NC groups (Figure 3E). Moreover, metastasis and invasion were also promoted by Ing4 knockdown in HEC cells (Figures 3F and 3G). Thus, our results indirectly revealed that a high level of H3K4me3 promoted HEC progression.

Correlation between H3K4me3 and clinicopathological characteristics for 100 HEC patients. 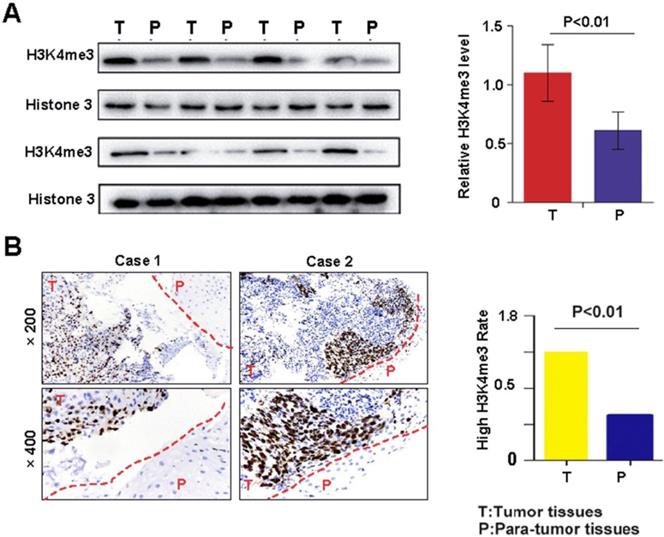 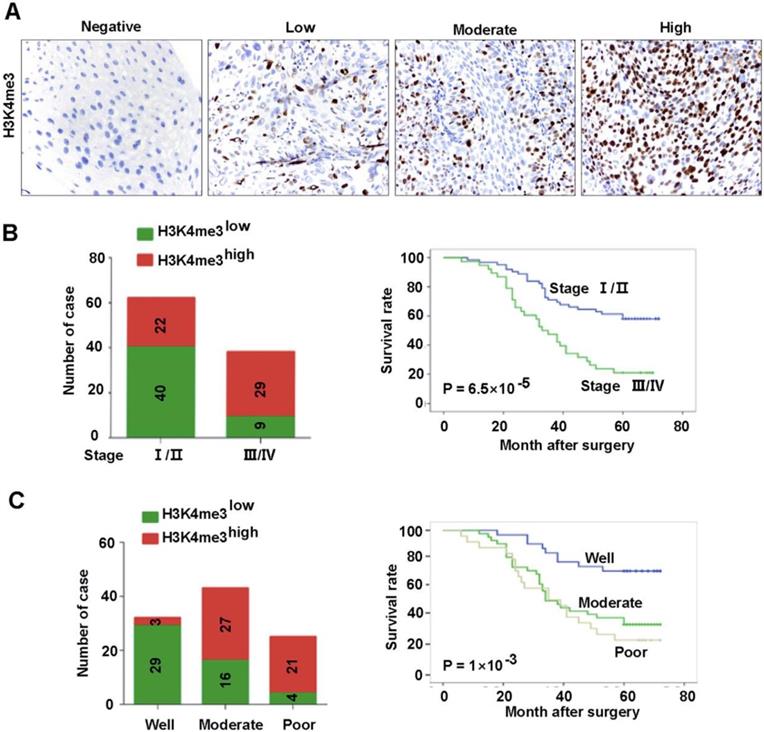 H3K4 methylation is an important histone methylation [22], which has been demonstrated to be linked with several diseases, such as nerve disorders and tumors [23]. Recently, H3K4 methylation has been studied more extensively in tumor progression; for example, a previous study reported its prognostic value in liver cancer. In this study, we first examined the level of H3K4me3 in adjacent normal tissues of esophageal and esophageal cancer tissues by western blotting and immunohistochemistry. Compared with adjacent tissues, the level of H3K4me3 in HEC was significantly increased, which is consistent with previous studies in liver and breast cancer [24]; moreover, we found that H3K4me3 staining in HEC tissues was heterogeneous. In addition, we linked H3K4me3 level to the malignant clinicopathological features of HEC, such as the poor tumor differentiation and high tumor stage. By Ing4 interference, we indirectly identified that high levels of H3K4me3 promote the cell proliferation, colony formation, metastasis and invasion. Importantly, we showed that patient with a high level of H3K4me3 had a poor prognosis than those with a low level of H3K4me3. Thus, we concluded that the level of H3K4me3 is a valuable predictor of survival in patients with HEC. 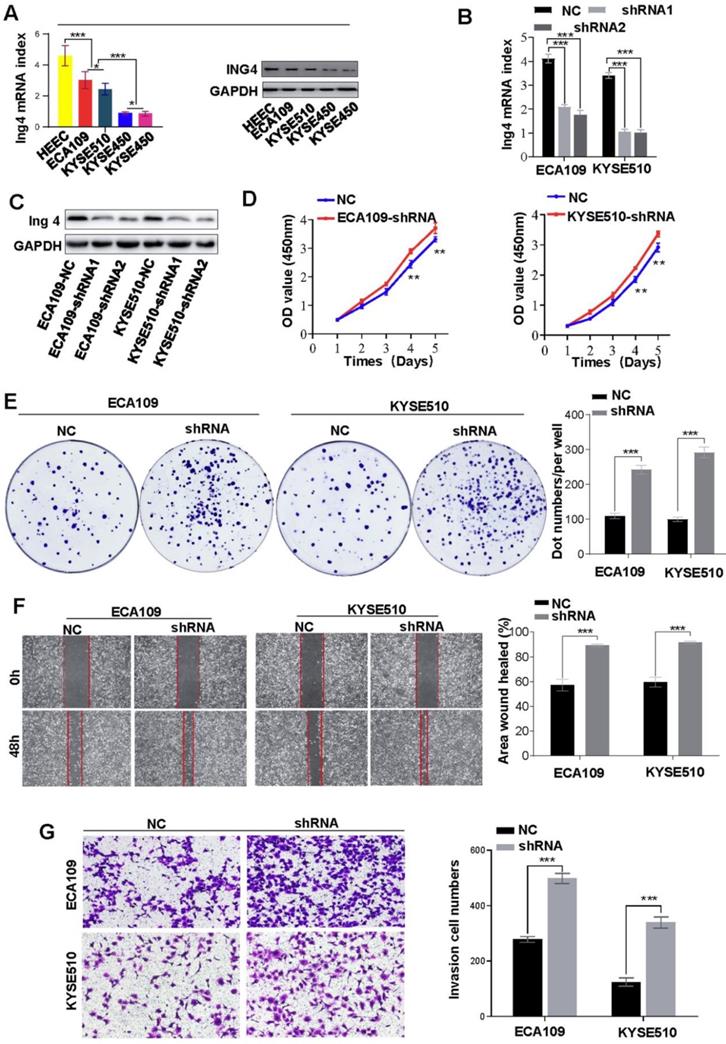 Univariate and multivariate analysis of factors associated with OS. 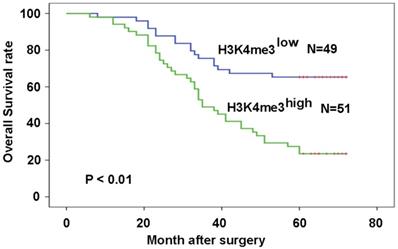 Our results indicated that high levels of H3K4me3 promote HEC progression. Similarly, H3K4me3 was found to be related to patient survival and tumor recurrence in early-stage colon cancer in previous studies [25], and H3K4me3 was demonstrated to be a key regulator of glioma carcinogenesis [26]. In addition, H3K4me3 inhibitors were found to overcome the drug resistance of pancreas ductal adenocarcinoma (PDAC) [27]. Thus, our study showed that H3K4me3 level is an important and potential prognostic biomarker for screening patients with poor prognosis of HEC patients.

In summary, we have revealed a new histone modification that can be used as a biomarker for predicting prognosis for HEC patients.