Background: The influence of body composition parameters in cancer prognosis attracted researchers' attention. This study investigated the role of visceral fat and skeletal muscle in the prognosis and efficacy of chemotherapy in metastatic gastric cancer (MGC).

Gastric cancer (GC) is the fourth most common malignant neoplasm and the second leading cause of cancer-related death worldwide [1]. Unfortunately, the response rate of GC to chemotherapy is low. Even with intensive first-line treatment regimens, such as ECF (epirubicin, cisplatin and fluorouracil), EOF (epirubicin, oxaliplatin and fluorouracil), and EOX (epirubicin, oxaliplatin and capecitabine), the response rate is still <50% in patients with metastatic GC (MGC). Although some patients benefit from chemotherapy, the side effects are unavoidable. Therefore, biomarkers that can predict chemotherapeutic efficacy are urgently needed.

Recently, obesity and sarcopenia are identified as prognostic factor in colorectal cancer [2, 3] and hepatocellular carcinoma[4, 5]. Recent evidence suggests that visceral fat plays a key role in carcinogenesis rather than general body fat [6, 7, 8, 9, 10]. Thus, visceral fat might more accurately measure carcinogenesis caused by adipose tissue than body mass index (BMI). Sarcopenia is the progressive and systematic loss of skeletal muscle with atrophy [11] and recognized as a risk factor for physical disability, decreased quality of life and ultimate death.

Therefore, visceral fat area and skeletal muscle area measured by computed tomography (CT) are proposed as body composition factors. CT is a “golden standard” to measure fat [12] and muscle area [13]. These body composition factors have been evaluated in different kinds of tumors [14-17]. In terms of gastric cancer, low visceral fat has been reported as a poor prognostic factor in GC patients with surgery resection [18]. Besides, the loss of visceral fat and skeletal muscle are also reported to predict poor prognostic factor in patients with who underwent gastrectomy [19].

The current study was a retrospective analysis based on a Phase II clinical trial (NCT00767377) that was conducted at Fudan University Shanghai Cancer Center during June 2007 to July 2012. Due to equipment updates, the new PACS CT system only contains image data after January 2010. Patients with resection of primary lesion and incomplete image data were excluded. All the enrolled patients were confirmed with unresectable MGC and treated with EOF regimen as first-line chemotherapy. Their diagnosis was certified by pathological examination as gastric adenocarcinoma. The specific therapeutic regimen was as described previously [20]. Tumor responses were evaluated in accordance with the Response Evaluation Criteria in Solid Tumors 1.0 (RECIST 1.0) by contrast-enhanced CT scans every two cycles [20].

Measurement of VFA and SMA by CT

Kaplan-Meier survival was used to estimate progression-free survival (PFS) and overall survival (OS) of the four quartiles. Receiver operating characteristic (ROC) curve was used to establish a cut-off value of visceral fat area (VFA) and skeletal muscle area (SMA) to distinguish patients who were expected to have longer PFS and OS from those who were not. Survival curves were estimated by Kaplan-Meier method and analyzed by log-rank test. A multivariate Cox proportional hazards model was used to evaluate the role of VFA and SMA in predicting PFS and OS, after adjusting for clinical characteristics, including age, gender, liver metastasis, lung metastasis, ascites and/or pleural effusion. We use VRV to indicate variation rate of visceral fat area at baseline and after 2-cycle chemotherapy. VRS was used to stand for variation rate of skeletal muscle area at baseline and after two cycles' chemotherapy. Statistical analysis was conducted using Stata version 12.0 software (StataCorp LP, College Station, TX, USA). P<0.05 (two-sided) was considered significant.

VFA exhibited large variations; therefore, an ROC curve was used to identify a cut-off level to discriminate patients who were expected to have disease progression within a short period (<6.0 months) from those who were not. Median PFS in the clinical trial (NCT00767377) was 6.0 months. The area under the curve (AUC) was 0.6004. A VFA value of 62.656 cm2 offered the best overall sensitivity (76.47%) and specificity (58.62%) (Figure 1). 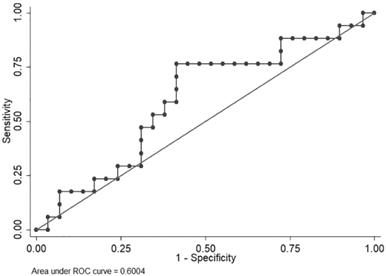 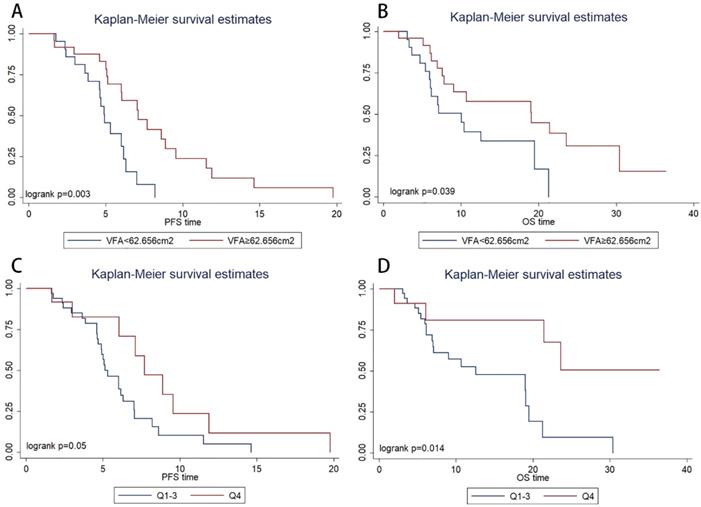 Combination analysis of Severe loss of VFA and SMA

We found that low baseline visceral fat area and skeletal muscle area were both significantly associated with shorter PFS and OS in MGC patients treated with EOF regimen. Moreover, the multivariate risk factor model confirmed that VFA was an independent predictive factor for PFS and OS. Baseline VFA and SMA, like Karnofsky score, reflects patients' nutrition status and performance status. Good visceral fat and skeletal muscle reserves indicate that the patients are in good physical condition to receive chemotherapy. 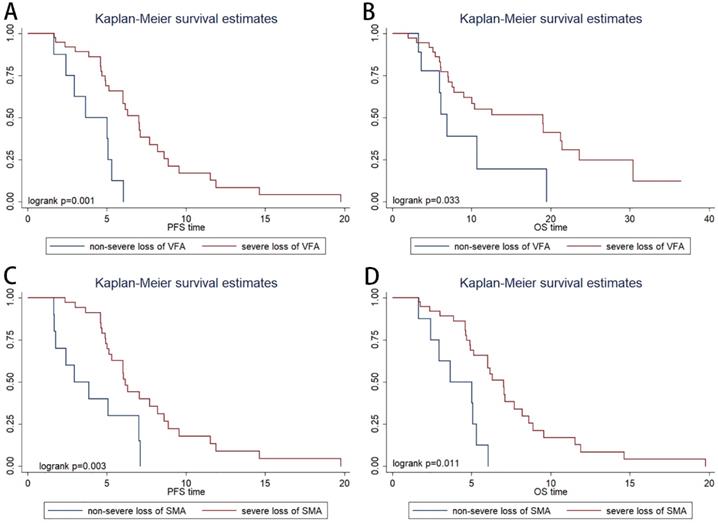 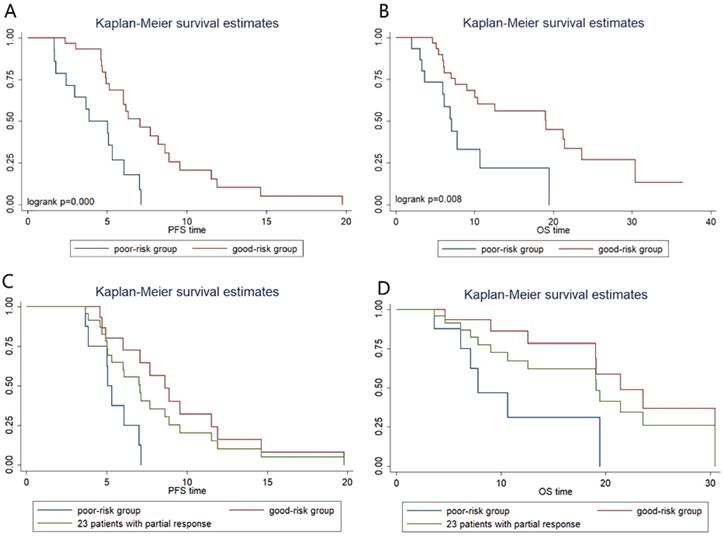 These composition parameters, including VFA, SMA, VRV and VRS, can be used together with performance status and tumor biomarkers, and help us to make clinical decisions. In patients with difficulties in evaluating efficacy after two-cycle chemotherapy, these parameters are especially useful for oncologists to evaluate whether patients will benefit from subsequent chemotherapy.

The composition parameters are closely related to malnutrition. Malnutrition may affect the tolerance of chemotherapy, quality of life and survival [23, 24]. Cachexia, which is a life-threatening condition and observed in 85% of gastric cancer patients [25], accounts for more than 20% of cancer death [26, 27]. Cachexia is composed of the loss of skeletal muscle and adipose tissue. Sarcopenia is observed in different kinds of cancer, which is associated with prognosis. Cancer cells produce inflammatory cytokines, resulting in systematic inflammation. These inflammatory cytokines may trigger muscle wasting and skeletal muscle atrophy, resulting in sarcopenia [26, 28]. The loss of skeletal muscle is also considered to predict poor prognosis in colorectal cancer [14] and gastric cancer [19].

Visceral fat is considered as a poor prognostic factor for survival in colorectal cancer [29-33] and pancreatic cancer [34]. However, in our study, low visceral fat and the loss of visceral fat predicts significant poor prognosis, which is supported by previous studies. Hyung S.P. et al conducted a single-center retrospective study from the CLASSIC Trial and revealed that the marked loss of visceral fat predicts shorter DFS and OS in GC patients who underwent gastrectomy [19]. Another retrospective study conducted by Kazuto H. showed that patients with upper gastrointestinal cancer with low visceral fat content had shorter OS than those with high visceral fat content [18]. We suggest three reasons for the opposite results in gastric cancer that low visceral fat predicts poor prognosis. First, all the enrolled patients are in stage IV, the oral ingestion disorder of which is poorer than patients in early stage. Nutritional deficiency can be caused by decreased intake, resulting in cachexia, which is associated with poor cancer prognosis. Second, fat is an energy reserve and loss of fat is a part of nutritional deficiency. Patients with better nutritional status and energy reserves are expected to live longer. Third, the loss of visceral fat can be considered as the process of energy consumption. The more energy is consumed, the shorter lifetime is expected.

In our study, patients who underwent the resection of primary lesion were excluded and there are two reasons. First, gastrectomy might remove the visceral adipose tissue, which affects the value of baseline visceral fat area before chemotherapy. Second, patients with gastrectomy lost the majority or the total of their stomach, which has a strong impact on nutrition absorption. All the researches that we have mentioned above focused on the GC patients in early stage who have underwent surgery with/without adjuvant chemotherapy. Therefore, the results may reflect the influence of both surgery and chemotherapy. Our study excluded all the patients with gastrectomy and focus on the influence of chemotherapy in the change of visceral fat and skeletal muscle. To the best of our knowledge, this is the first time that the composition parameters, visceral fat and skeletal muscle, are analyzed in MGC patients who lost the chance of the surgical resection at the initial diagnosis to predict prognosis and chemotherapy response.

Our study also had some limitations. First, the sample size was small. Because of equipment replacement in our center, only one third of patients in the Phase II trial were enrolled in this study. Second, the CT scans were evaluated by only one experienced radiologist, which might have caused deviation. Third, we do not have a validation population to confirm our results. Actually, we have tried our best to search for an independent cohort to verify our results. However, the public database we have searched, including TCGA, SEER, ICGC, and GEO, have no information about abdominal fat content or skeletal muscle content. We have conducted a similar research in an ongoing phase III clinical trial in our center and try to verify our results.

In conclusion, VFA measured by CT scans can be used as a predictive factor for PFS and OS in MGC patients treated with EOF regimen. The severe loss of visceral fat and skeletal muscle can be used to predict shorter PFS and OS. In patients with severe loss of VFA and SMA after 2-cycle chemotherapy, the decision of subsequent chemotherapy should be made after deliberate consideration.

This study was funded by The National Key Research and Development Program of China (grant no. 2017YFC1308900).

Ethics approval and consent to participant

Informed consent was been obtained from all participants. The study was approved by the Ethics Committee of Fudan University Shanghai Cancer.

10. Goh LY, Goh KL. Obesity: an epidemiological perspective from Asia and its relationship to gastrointestinal and liver cancers. Journal of gastroenterology and hepatology. 2013;28(Suppl 4):54-8

23. Shizgal HM. Body composition of patients with malnutrition and cancer. Summary of methods of assessment. Cancer. 1985;55:250-3