Background and Objective: GINS complex subunit 2 (GINS2), a member of the GINS complex, is involved in DNA replication. GINS2 is upregulated in a variety of aggressive tumors, such as leukemia, breast cancer, and cervical cancer. However, the role of GINS2 in pancreatic cancer has still remained elusive. In this study, PANC-1 and BxPC-3 cell lines were chosen to perform experiments in vitro. Additionally, the effects of GINS2 interference on the cell viability, cell apoptosis, cell cycle, and tumor growth in nude mice were analyzed.

GINS is one of the core components of the eukaryotic replicative helicase, which is composed of four submits (Sld5, Psf1, Psf2, and Psf3) [8]. The GINS complex has been identified to play a pivotal role in the initiation of DNA replication and cell cycle [9]. GINS2, also known as Psf2, is a member of the GINS complex, and has been reported to be involved in the tumorigenesis of several types of cancer [10]. Previous studies indicated that GINS2 is highly expressed in breast cancer [11], ovarian cancer [12], leukemia [13,14], gliomas [15], and cervical cancer [16]. In addition, GINS2 has been shown to promote cell proliferation and desensitize cells to apoptosis. These findings suggest that GINS2 plays a significant role in cancer progression. However, the effects of GINS2 on pancreatic cancer patients have not been reported yet.

The MAPK/ERK pathway (also known as the Ras-Raf-MEK-ERK pathway) is a highly conserved pathway that transfers extracellular signals to cellular proliferation signals [17,18]. The MAPK/ERK pathway is an important signal transduction system involved in the regulation of cell proliferation, survival and differentiation [19]. However, it has still remained elusive whether GINS2 affects cell viability, cell apoptosis, and cell cycle of pancreatic cancer through the MAPK/ERK pathway.

In the present study, PANC-1 and BxPC-3 cell lines were utilized to perform experiments in vitro. In order to determine the function of GINS2 in human pancreatic cancer, the knockdown of GINS2 was achieved by GINS2 siRNA. Subsequently, the effects of GINS2 interference on the cell viability, cell apoptosis, cell cycle, and tumor growth in nude mice were analyzed. Moreover, bioinformatics analysis was utilized to investigate the association between GINS2 and tumor growth, in order to identify molecular mechanisms on the pathogenesis of pancreatic cancer. Our findings may provide a reliable evidence for the treatment and prognosis of pancreatic cancer patients.

Cells were seeded into 96-well plates at a density of 1×103 cells/well. Cell proliferation was assessed using the CCK-8 (Beyotime Institute of Biotechnology, Shanghai, China) assay. After treatment with GINS2 siRNA, cells were grown for 12, 24, 48, and 72 h, and 10 μL CCK-8 was added to each well and incubated for 1 h. Then, the optical density (OD) was measured at wavelength of 450 nm using an enzyme-linked immunosorbent assay (ELISA) plate reader (Promega, Madison, WI, USA). Control cells were treated with cultured media containing 0.15% (v/v) dimethyl sulfoxide (DMSO). At least three independent experiments were carried out.

For cell apoptosis assay, cell pellets were collected after transfection, and stained with the AnnexinV/PI apoptosis kit (Beyotime Institute of Biotechnology, Shanghai, China) according to the manufacturer's instructions. In brief, the cells were trypsinized and re-suspended in 200 µL binding buffer, followed by addition of Annexin V-FITC/PI into the binding buffer; then, the cells were incubated in the dark for 5 min at room temperature. After staining, the cells were analyzed by a flow cytometer (BD Biosciences, San Jose, CA, USA). Data were analyzed by FlowJo V7 software.

For the cell cycle assay, cell pellets were collected and fixed in 70% ethanol at 4℃ overnight after transfection, and treated with 5 ug/ml RNase A at 37 °C for 30 min. After that, they were stained with propidium iodide (PI) solution (BD Biosciences, San Jose, CA, USA) for 30 min at room temperature, and the cells were analyzed by a flow cytometer (BD Biosciences, San Jose, CA, USA). The percentage of cells in G0/G1, S, and G2/M phases was determined by using FlowJo V7 software.

In vivo xenograft studies in mice

Four-week-old female BALB/c nude mice were obtained from the Laboratory Animal Center of Chinese Academy of Sciences (Shanghai, China) and fed under specific-pathogen-free (SPF) conditions. Mice were randomly divided into two groups, including control (NC) group and GINS2 knock-down (KD) group. Then, PANC-1 cells and KD cells (density, 1 × 107 cells/well) were subcutaneously injected into the right hind limbs, respectively. Tumor growth was monitored by measurement of the length and width weekly, and the tumor volume was calculated using the following equation, (L ×W2)/2.

To confirm the role of GINS2 interference in cell cycle, flow cytometry was conducted. It was unveiled that compared with the NC group, GINS2 interference caused a significant increase in the percentage of cells in G0/G1 phase, with a concomitant decrease in the percentage of cells in S phase in both PANC-1 and BxPC-3 cells (Fig. 3A and 3B). Thus, GINS2 interference induced cell cycle arrest in G1 phase. In addition, Western blot analysis was undertaken to assess the protein expressions of CDK4, CDK6, and Cyclin D1. As illustrated in Fig. 3C and 3D, the expressions of CDK4, CDK6, and Cyclin D1 were significantly decreased following the interference of GINS2. 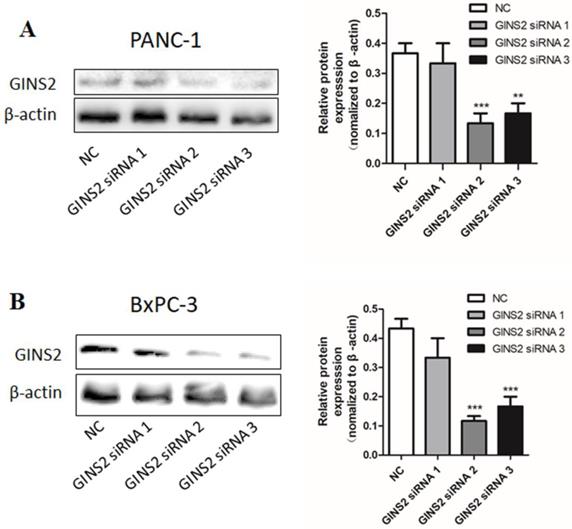 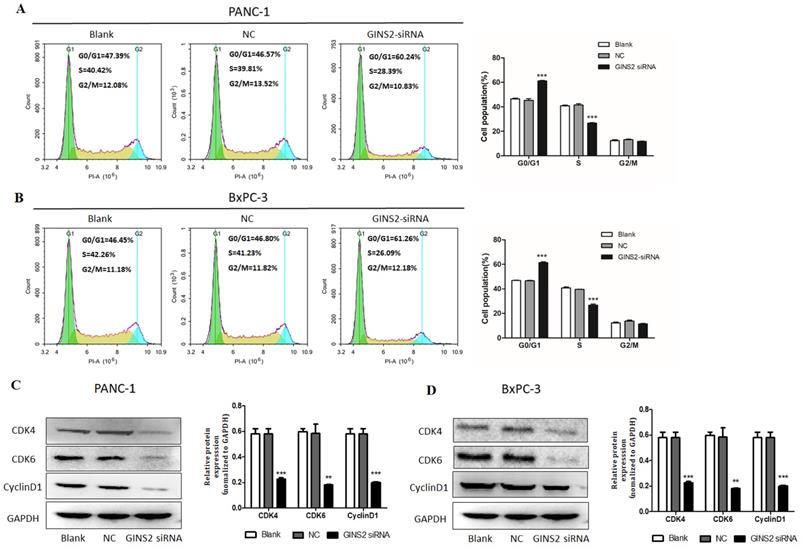 We next evaluated the effects of GINS2 on cell apoptosis in pancreatic cancer cells. Using flow cytometry, the proportion of apoptotic cells was assessed. Our results uncovered that GINS2 interference noticeably promoted the cell apoptosis. As displayed in Fig. 4, the percentage of apoptotic cells was markedly higher in both PANC-1 and BxPC-3 cells compared with NC cells (Fig. 4A and 4B). Furthermore, Western blot analysis disclosed that GINS2 interference elevated the expression level of Bax in both PANC-1 and BxPC-3 cell lines. In contrast, the expression level of Bcl-2 was significantly decreased (Fig. 4C and 4D).

In order to confirm the mechanisms of GINS2 interference inhibiting cell proliferation and promoting apoptosis in pancreatic cancer cells, we detected the gene expression profiling of NC group and GINS2 siRNA group in PANC-1 cells. Compared with NC group, a great number of genes were up-regulated or down-regulated. As depicted in Fig. 5A, red represents up-regulated genes, and green shows down-regulated genes. Subsequently, the significantly altered signaling pathways were identified by IPA, and it was revealed that the value of -log10 (P value) for MAPK/ERK pathway was maximum (Fig. 5B). These outcomes indicated that GINS2 may influence the function of pancreatic cancer cells by regulating MAPK/ERK pathway.

Furthermore, the expressions of ERK1/2, p-ERK1/2, MEK, and p-MEK were detected by Western blotting. Following the interference of GINS2 by siRNA, the expression levels of ERK1/2 and p-ERK1/2 were decreased compared with the NC in both PANC-1 and BxPC-3 cell lines (Fig. 6C and 6D). Moreover, the expression levels of MEK and p-MEK were remarkably decreased (Fig. 6A and 6B). Therefore, the GINS2 interference suppressed the expression level of ERK, inhibited the phosphorylation of ERK, and altered downstream protein levels, including apoptosis-related proteins and cell cycle-related proteins. Altogether, our data indicated that GINS2 affects the cell proliferation, apoptosis and cell cycle in pancreatic cancer cells via MAPK/ERK pathway.

GINS2 interference induced cell apoptosis in pancreatic cancer cells. (A and B). After treatment with GINS2 siRNA for 48 h, cells were stained with Annexin-V/FITC and PI, and flow cytometry assessed the percentage of apoptotic cells. (C and D). Western blot analysis was used to detect the expression levels of Bax and Bcl-2. Data were presented as the mean ± standard deviation (SD) of three independent experiments. FITC, fluorescein isothiocyanate; PI, propidium iodide (* P<0.05, ** P<0.01, ***P<0.001 vs. NC group). 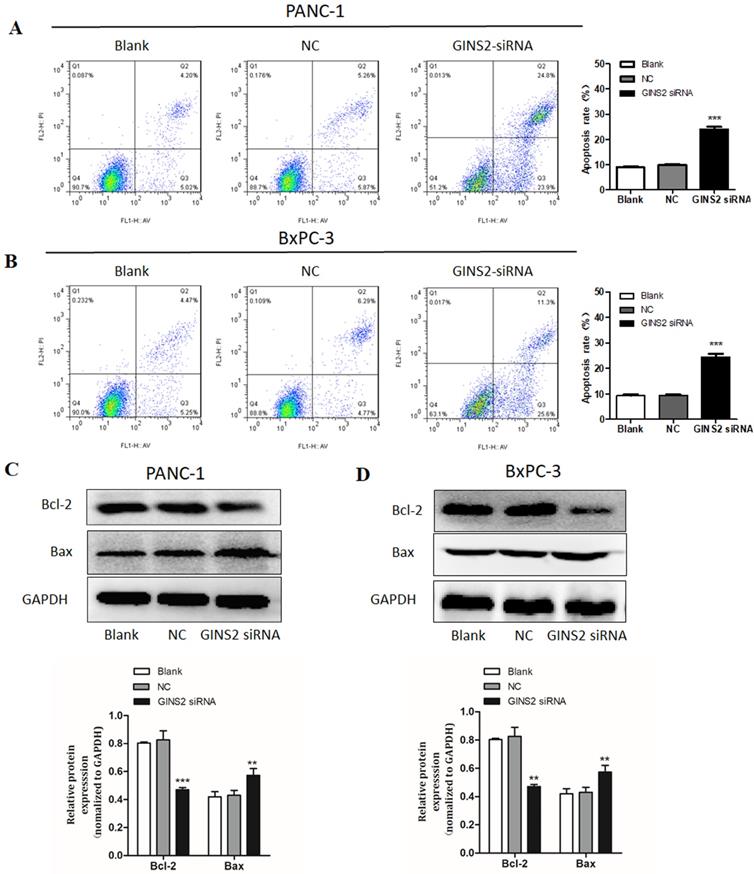 To further explore the effects of GINS2 knockdown, we established cancer xenograft model in nude mouse by subcutaneous injection of NC and siGINS2 PANC-1 cells, respectively. The results revealed tumor growth for 11 weeks. After 11 weeks, tumor volume was measured at 3-day and 4-day intervals for two weeks. After 13 weeks, mice were sacrificed. We found that the nude mice transplanted with cells expressing NC exhibited larger and heavier tumors, while volume and weight of tumor were remarkably reduced in cells expressing siGINS2 (Figure 7A-C). The above-mentioned findings demonstrated that GINS2 interference could dramatically inhibit tumor growth. 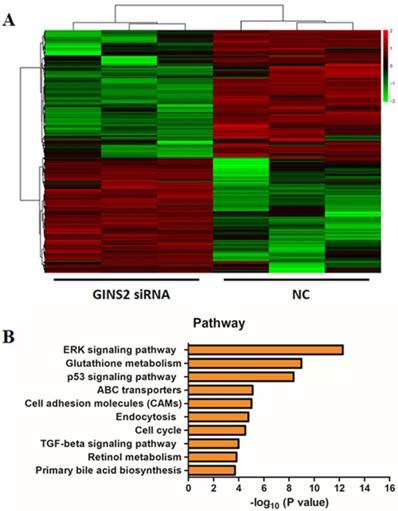 DNA replication is an essential event for all living organisms, and thus the basic mechanism is conserved from bacteria to eukaryotes. Genomic DNA replication must be executed accurately and only once during the S-phase of the cell cycle. GINS2, as an important subunit of GINS complexes, mediates the initiation of DNA replication in eukaryotic cells [21]. Previous studies reported that high GINS2 expression is associated with several types of malignant cancer, and is involved in the regulation of cell apoptosis, cell cycle, and signaling pathways [8]. Therefore, GINS2 was considered as a potential prognostic marker and therapeutic target for these tumors. However, to the best of our knowledge, the association between GINS2 and the progression of pancreatic cancer has still remained obscure.

MAPK cascade is a critical pathway for tumor cell proliferation, differentiation, apoptosis, and resistance to drug therapy. It is currently known to comprise four sub-pathways: ERK, JNK, BMK, and and p38. The ERK pathway is an important signal transduction system for the regulation of cell proliferation, survival and differentiation [32-34]. Activation of ERK pathway can promote cell proliferation, differentiation, and cellular survival [35,36]. To further confirm our hypothesis, we performed microarray, bioinformatics, and Western blotting assays to indicate whether GINS2 affects the ERK pathway to alter the biological behaviors of pancreatic cancer cell lines. Our findings unveiled that the ERK signaling pathway was significantly altered after GINS2 inference. Additionally, the expression levels of ERK, p-ERK, MEK, and p-MEK were remarkably reduced. The above-mentioned results demonstrated that Bax, Bcl-2, CDK4/6, and Cyclin D1 are functional proteins of the ERK pathway that can affect cell survival and cell cycle. This was consistent with our results that increased apoptotic rate and cell cycle arrest might be caused by GINS2 interference. Taken together, our outcomes indicated that GINS2 influences the cell viability, cell apoptosis, and cell cycle of pancreatic cancer cell lines via the MAPK/ERK pathway.

In summary, we demonstrated that GINS2 interference inhibited the cell viability, promoted cell apoptosis, and induced cell cycle arrest in pancreatic cancer cell lines via the MAPK/ERK pathway (Fig. 8). The mechanism underlying this phenomenon indicated that GINS2 may be highly significant for the treatment of pancreatic cancer.

GINS2 interference suppressed tumor growth in vivo. (A) Subcutaneous injection of NC and siGINS2 PANC-1 cells to detect the effects of GINS2 knockdown. (B) Tumor growth curve of cancer xenograft model in nude mice. After 11 weeks, tumor volume was calculated using the formula v=0.5*ab2 (a and b represent the longer and shorter diameters of the tumor, respectively) at 3-day and 4-day intervals for two weeks. (C) Statistics for the tumor weight. Data were expressed as mean ± standard deviation (SD) (n=10 for each group) (* P<0.05, ** P<0.01, ***P<0.001 vs. NC group). 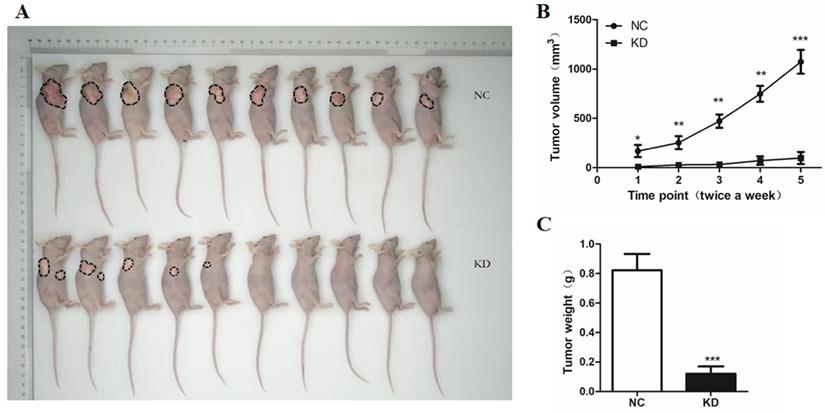 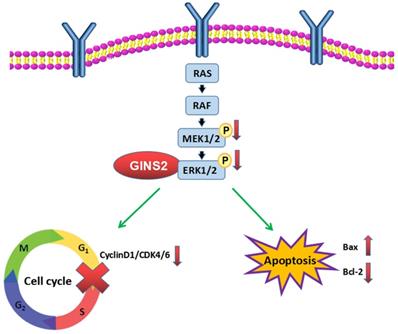