Background: Dysregulated expression of miR-532-3p has been observed in several types of cancer and plays a key role in tumor progression and metastasis. In this study, we analyzed the role and molecular mechanism of miR-532-3p in lymphoma progression.

Methods: The expression of miR-532-3p in lymphoma sample tissues was analyzed using the GEO database and in cell lines by quantitative reverse transcription (qRT)-PCR. The functions of miR-532-3p in lymphoma cell proliferation and apoptosis were analyzed by CCK-8 assay and Annexin V-FITC/propidium iodide staining, respectively. In vivo, the tumor weight and volume were measured. The target gene of miR-532-3p was predicted using miRanda software, and then luciferase, qRT-PCR, and western blot assays were performed to verify that β-catenin was the downstream target gene of miR-532-3p.

Conclusion: This study demonstrates that miR-532-3p functions as a tumor inhibitor in lymphoma progression by targeting β-catenin, suggesting miR-532-3p/β-catenin as a new diagnosis marker or potential therapeutic target in lymphoma.

Lymphoma is a malignant hematologic tumor that can invade nearly all tissues and organs in the body [1]. The main treatment methods for lymphoma are surgery, chemotherapy, radiation, immunotherapy, and autologous stem cell transplantation [2-5]. With advances in comprehensive treatment over the last two decades, the prognosis of lymphoma has significantly improved. However, approximately 10% of lymphomas relapse or become refractory after first-line therapy [6, 7], which is the main cause of poor prognosis in lymphoma patients [8]. The underlying mechanism of lymphoma progression remains unclear. Therefore, it is necessary to explore the mechanism of lymphoma and identify potential molecular targets to improve long-term prognosis.

MicroRNAs (miRNAs) are a group of non-protein-coding RNAs, approximately 22 nucleotides in length. They negatively regulate downstream gene expression by binding to the 3' untranslated regions (UTRs) of their target genes and repressing mRNA translation [9-11]. An increasing number of studies have suggested that miRNAs play important roles in biological processes and are involved in many human diseases, particularly cancer [12]. Numerous studies have demonstrated the important regulatory roles of miRNAs in tumor progression, acting as oncogenes or tumor suppressors by regulating gene expression [13-15]. miR-532-3p is reportedly downregulated in several types of tumors and is considered as a tumor suppressor [16-18]. One report showed that miR-532-3p could predict the effectiveness of rituximab in patients with chronic lymphocytic leukemia [19]; another study found that miR-532-3p was expressed at low levels in patients with classical Hodgkin lymphoma compared to controls [20]. However, the biological function and underlying mechanism of miR-532-3p in lymphoma are unclear.

In this study, we examined whether the expression of miR-532-3p was downregulated in lymphoma tissues and cell lines compared to normal lymphocytes. Next, the effects of miR-532-3p on lymphoma cell proliferation and apoptosis were analyzed. Our results revealed that the β-catenin gene is directly targeted by miR-532-3p. These results suggest that miR-532-3p induces lymphoma progression by targeting β-catenin.

The date for miRNA expression in lymphoma (50 lymphoma tissues and 6 normal lymphoid tissues, GSE31377) were obtained from the Gene Expression Omnibus (GEO, https://www.ncbi.nlm.nih.gov/geo/). All GEO data were analyzed by GEO2R or R.

The miR-532-3p mimic (5'-CCUCCCACACCCAAGGCUUGCA-3') and miR-532-3p inhibitor (5'-UGCAAGCCUUGGGUGUGGGAGG-3') were purchased from Shanghai GenePharma Co, Ltd. (Shanghai, China). The cells (3 × 105 cells/well) were seeded into 6-cm plates and cultured overnight before transfection. When the cell density reached 70-80%, the cells were transfected using Lipofectamine 2000 (Invitrogen, Carlsbad, CA, USA) according to the manufacturer's instructions.

Cell apoptosis was detected with an Annexin V-FITC/PI kit (C1062M, Beyotime, Shanghai, China) according to the manufacturer's instructions. Cells (5 or 10 × 104 cells/well), including the cell suspension, were collected after transfection for 48 h and washed twice with cold PBS, followed by resuspension in 195 μL binding buffer. Next, the cells were incubated with 5 μL Annexin V-fluorescein isothiocyanate (FITC) for 15 min, followed by 10 μL propidium iodide for 5 min at 4 °C in the dark. Flow cytometry was performed to detect cell apoptosis, and data were analyzed with BD Accuri c6 software (BD Biosciences, Franklin Lakes, NJ, USA).

To predict the direct targets of miRNA-532-3p, PITA, miRmap, miRanda software (http://www.microrna.org//) were used. To construct the luciferase plasmid, β-catenin-3'UTR, and mutated β-catenin-3' UTR were inserted into the pGL3-Promoter vector (Invitrogen) to construct Wt-β-catenin-3'UTR or Mut-β-catenin-3'UTR. U937 cells (5 × 105/well) were seeded into 6-well plates and cultured in an incubator for 24 h, after which the cells were co-transfected with the luciferase reporter vectors Wt-β-catenin 3'UTR or Mut-β-catenin 3'UTR and 5 µL miRNA-532-3p mimics or negative control (NC) mimics using Lipofectamine 2000 (Invitrogen). At 48 h after transfection, firefly and Renilla luciferase activities were measured using the Dual Luciferase Kit (Promega, Madison, WI, USA) according to the manufacturer's protocol. 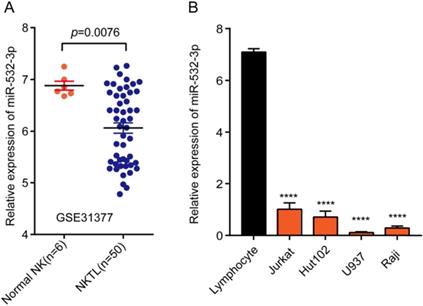 Female BALB/c nude mice (4-6-weeks old, weighting 18-20 g) were obtained from the Shanghai Experimental Animal Center, Chinese Academy of Sciences. All mice were housed in a specific pathogen-free laboratory. Animal experiments were performed with the approval of the Animal Ethics committee of Tongji University, Shanghai. Twelve mice were randomly divided into the NC and mimic groups, with six mice in each group, and subcutaneously injected with 100 μL (5 × 107 cells/mL) U937 cells in the right flank. After tumorigenesis, mice were administered NC or miRNA-532-3p mimics via tail vein injection for 3 weeks (0.5 OD/day). Tumor length and width were measured every 3 days, until the end of the experiment. The tumor volume was calculated as follows: tumor volume = (length × width2)/2. All mice were sacrificed 33 days after the first injection, the tumors were removed and weighed, and tumor samples were stained with hematoxylin and eosin.

The CDS (coding sequence) of β-catenin was searched using the Gene database in NCBI (https://www.ncbi.nlm.nih.gov/), and the primers were designed. The CDS was then amplified from complementary DNAs of U937 cells by PCR using the following primers: Forward: 5'-CCCAAGCTTATGGCTACTCAAGCTGATTTGATG-3'; Reverse: 5'-CGGAATTCTTACAGGTCAGTATCAAACCAGGC-3' (Hind III, EcoR I sites were introduced). The amplification product and pcDNA3.1(+) vector (Addgene, Rockville, MD) were digested using Hind III and EcoR I endonucleases, respectively. Then the amplification product was inserted into pcDNA3.1(+) catalyzed by T4 DNA ligase (Thermo Fisher). The β-catenin overexpression plasmid sequences were verified by DNA sequencing.

All experiments were repeated three times independently. All data were expressed as mean ± SD and analyzed with GraphPad Prism 7.0 software (GraphPad, Inc., La Jolla, CA, USA). Differences between two groups or more than two groups were analyzed by Student's t-test or analysis of variance. P < 0.05 was considered to indicate statistically significant results. 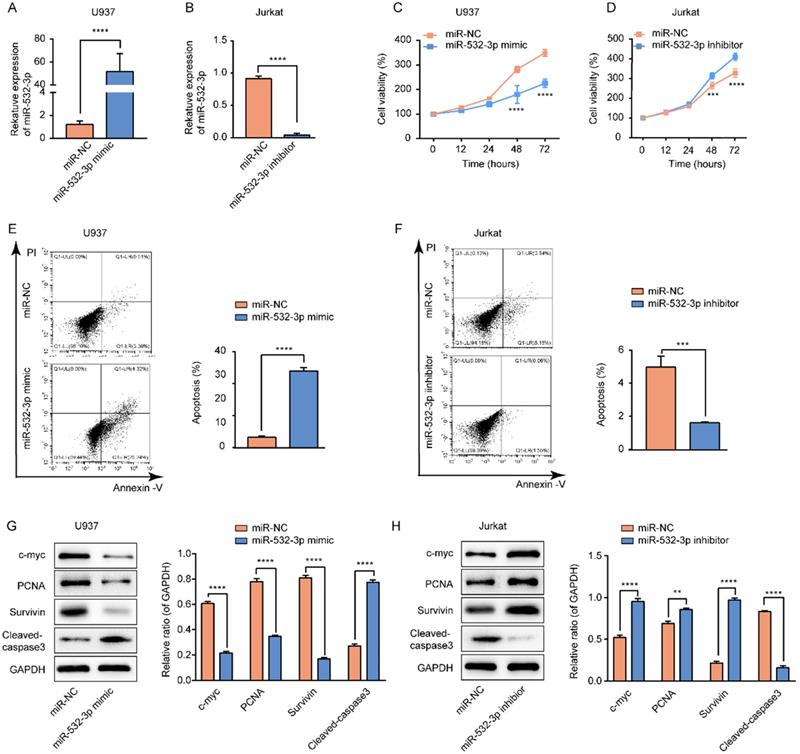 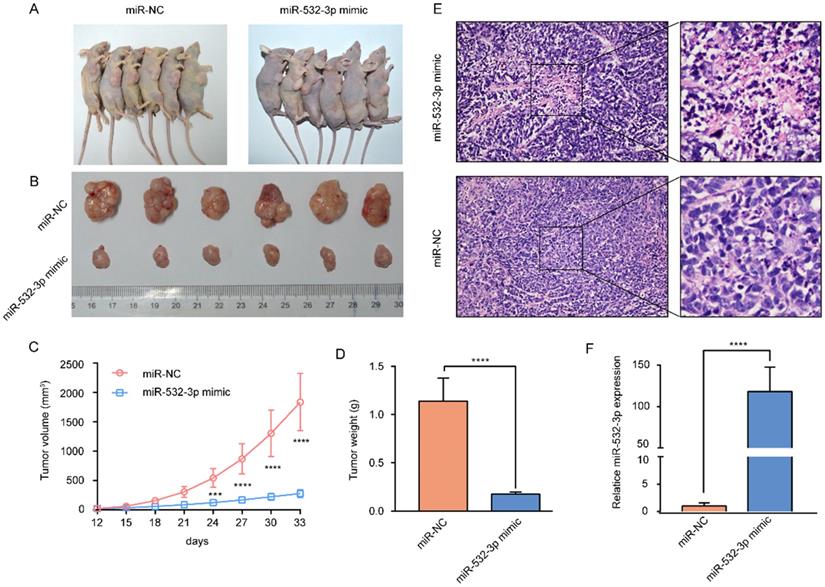 To further investigate the effect of miR-532-3p on lymphoma growth in vivo, U937 cells transfected with the miR-532-3p mimic and control U937 cells were subcutaneously injected into nude mice. The results showed that tumors containing the miR-532-3p mimic were smaller and had a lighter weight than those in the NC group (Figure 3A-D). Hematoxylin and eosin staining of murine tumor tissues revealed that miR-532-3p mimic-treated tumors have a more disordered histopathological structure and morphology than the tumor samples from the NC group (Figure 3E). Additionally, RT-PCR was performed to confirm the expression of miR-532-3p in tumor tissue in each group, which showed miR-532-3p overexpression in the mimic group (Figure 3F). These results demonstrated that miR-532-3p overexpression suppressed lymphoma tumor growth in vivo. 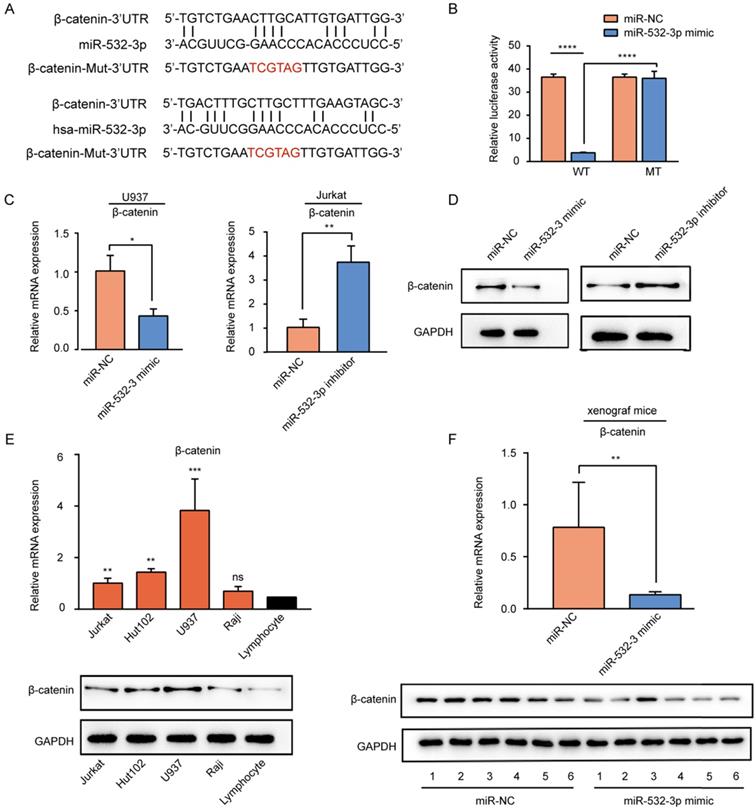 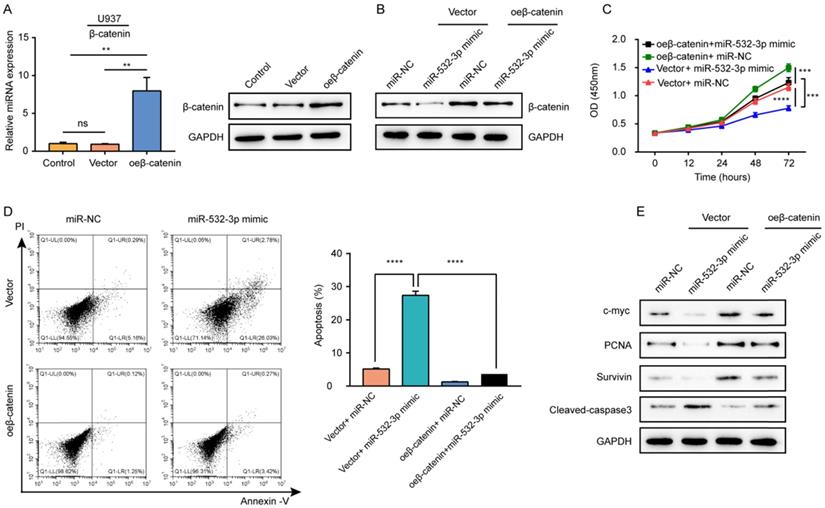 Lymphoma is among the most common types of blood tumors and originates from the lymphatic hematopoietic system [1]. The major causes of the poor prognosis of patients with lymphoma are the disease's recurrence and refractory state [7, 21]. Although treatment methods for lymphoma have progressed, therapeutic options for relapsing and refractory lymphoma remain limited as the underlying molecular mechanism remains unclear [22, 23]. Therefore, a better understanding of the molecular mechanism of lymphoma proliferation can lead to the development of targeted therapies.

Recent studies have reported that the expression of miR-532-3p, which suppresses cancer growth, was downregulated in several types of tumors, such as renal carcinoma, hepatocellular carcinoma, colorectal cancer [16-18, 24]. However, the specific functions of miR-532-3p in lymphoma remain unclear. In this study, we have firstly shown that miR-532-3p was downregulated in lymphoma tissues and cell lines. Moreover, functional analysis of miR-532-3p in lymphoma cell lines and a nude mouse model showed that a miR-532-3p mimic suppressed tumor growth and progression and induced apoptosis, acting as an inhibitory oncomiR. Our results are consistent with those of previous studies showing that miR-532-3p inhibited tumor cell proliferation in lung cancer and gastric cancer [25, 26]. Therefore, these findings demonstrated the effectiveness of using miR-532-3p as a molecular marker of lymphoma.

One question persists; how does miRNA-532-3p play a tumor-suppressive role in lymphoma? Recent reports have identified many targets that are regulated by miR-532-3p. Among which, PTPRT, FOXP3, and CCR7 that function in proliferation and metastasis, have been widely studied [17, 18, 25]. In this study, β-catenin was found to be the target gene of miR-532-3p by miRanda software. Wnt/β-catenin is the most critical signaling pathway in some tumors. Previous studies demonstrated that overexpression of β-catenin promoted cancer phenotypes, including cell growth, metastasis, and invasion, and led to poor outcomes in many types of cancer [27-30]. Low-expression of β-catenin has been reported to suppress cancer cell proliferation and induce apoptosis [31, 32]. Taken together, these observations reveal that β-catenin acts as a promoter in tumor proliferation and metastasis, which is opposite to the inhibitory effect of miR-532-3p. In the present study, our data indicated that β-catenin expression was downregulated in the miR-532-3p mimic group, both in vivo and in vitro. Additionally, the protein and mRNA expression levels of β-catenin were increased in lymphoma cell lines. These results indicated that β-catenin is miR-532-3p's direct target gene. Simultaneously, considering that β-catenin promoted tumor progression in many types of cancer, it might be a significant mediator of the tumor-inhibitory functions of miR-532-3p. Moreover, overexpression of β-catenin reversed the effects of the miR-532-3p mimic in suppressing proliferation and inducing apoptosis in lymphoma cells, suggesting that miR-532-3p regulates these phenotypes by targeting β-catenin. Therefore, these results contribute to the hypothesis that miR-532-3p targeted β-catenin to suppress lymphoma progression. Since the exact mechanisms of β-catenin in lymphoma are still unclear, we need to investigate further the mechanism of β-catenin promoting the progression of lymphoma.

In conclusion, we demonstrated that miR-532-3p expression was downregulated in lymphoma cell lines and tissues, which promoted lymphoma progression. Moreover, we identified β-catenin as a downstream target gene of miR-532-3p and mediation of the biological function of miR-532-3p in lymphoma. Taken together, the miR-532-3p/β-catenin axis might be a new molecular mechanism in the progression of lymphoma, and miR-532-3p may be a useful prognostic marker and potential therapeutic target for treating lymphoma.

Dr. Tinghui Jiang is a professor of oncology at Putuo Hospital, Shanghai University of Traditional Chinese Medicine. He has won the second and third prizes of the Shanghai municipal science and technology progress commission for four consecutive years and participated in the national “ninth five-year” project and “one hundred projects in ten years” promotion project of the ministry of health.

Dr. Yan Liu is an attending physician at Putuo Hospital, Shanghai University of Traditional Chinese Medicine. She is currently a Ph.D. student under the supervision of Prof. Yongming Zhou. Her research is focused on integrated traditional and western medicine treatments for lymphoma.