Low expressions of PRKACB are related to the occurrence of various human malignancies. However, the prognostic value of PRKACB expression in colorectal cancer (CRC) patients remains controversial. In this analysis, PRKACB expression in CRC tumors was evaluated across the GEO, TCGA, and Oncomine databases, and a PRKACB survival analysis was performed based on the TCGA profile. We detected PRKACB in 7 GEO series (GSE110225, GSE32323, GSE44076, GSE9348, GSE41328, GSE21510, GSE68468) and TCGA spectra (all P <0.05). A meta-analysis performed in the Oncomine database revealed that PRKACB was significantly up-regulated in neoplastic tissues compared to normal tissues (all P <0.05). A Kaplan-Meier analysis demonstrated that lower PRKACB expression in tumors was significantly associated with poorer overall survival (OS) in patients with CRC (P <0.05). A subgroup analysis showed that low expression of PRKACB correlated with poor 1-, 3-, and 5-year OS (all P <0.05). Furthermore, in males (P = 0.0083), whites (P = 0.0463), and non-mucinous adenocarcinoma patients (P = 0.0108), the down-regulation of PRKACB expression was more significant for the OS prognostic value. Conclusion: PRKACB is down-regulated in tumors and associated with worsening OS in CRC patients.

Colorectal cancer (CRC) is amongst the most prevalent digestive tract malignancies and it is the world's second most deadly cancer with almost 900 000 deaths recorded annually [1]. Despite formidable advances in imaging techniques, surgery and multimodal therapy, the overall survival for patients with advanced CRC remains low. A study showed that the incidence of CRC in China has constantly been on the rise over the past three decades and equally predicted a further increase in the near future [2]. According to the 2015 cancer statistics [3], it is estimated that about 2,376,300 new CRC cases and 191,000 CRC related deaths occurred in China, accounting for nearlyone-tenth of the global CRC burden. Even though outstanding radiological, surgical and multimodal therapeutic advances have recently been mad, the overall survival rates for patients with late stage CRC remain substantially low at ∼8-9% [4]. A precise estimation of the prognosis plays an important role in the diagnostic and therapeutic management of CRC patients. Thus, identifying reliable and practical prognostic biomarkers and revealing novel CRC treatment targets is urgently required [5,6].

The protein kinase cAMP-dependent catalytic subunit β (PRKACB) encoding the cAMP-dependent protein kinase catalytic subunit β (PRKACB) is a member of the serine/threonine protein kinase family [7]. It serves as a key regulatory point and is involved in cell proliferation, differentiation, regulation of apoptosis, and is closely related to physiological and pathological processes such as cell growth, gene expression, tumor proliferation and metastasis [8]. Recently, the presence of the PRKACA and PRKACB fusion genes has been detected in various cancers such as bile duct cancers, fibrolamellar hepatocellular carcinoma, and pancreatic cancers, and there is a possibility that this might be implicated in the pathogenesis of cancer [9-11]. Some researches declared that PRKACB mutations could cause adrenal and bile duct tumors [12,13], and that high expressions of PRKACB is related to drug resistance in patients diagnosed with breast cancer [14]. Previous studies have confirmed that the c-MYC was directly activated by PRKACB, which then induced neoplasia [15,16]. Conversely, another study suggested that the PRKACB might act as a tumor suppressor gene in non-small cell lung cancers [17]. Nonetheless, the exact role played by PRKACB in colorectal cancer is still unknown. Thus, to evaluating the prognostic value of the PRKACB in CRC patients is fundamental.

To help elucidate the possible relationship between the PRKACB expression and CRC patient outcomes, we identified the PRKACB expression in GEO, Oncomine and TCGA databases and performed a survival analysis based on the TCGA profile, with hopes of providing useful insights into the development of colorectal cancer.

All of the publicly available colorectal cancer RNA-Seq data information were downloaded from The Cancer Genome Atlas (TCGA) official website (https://cancergenome.nih.gov/) before December 17, 2019, through the GDC Data Transfer Tool [18]. TCGA RNAseq data was comprised of 568 tumor samples and 44 non-tumor samples.

Raw CEL files of the microarray from each GEO dataset were normalized by the quantile method of Robust Multichip Analysis (RMA) from the R affy package [19] and the normalized gene expression levels were presented as log2-transformed values by RMA. Gene expression of PRKACB was determined by tumor and non-tumor samples comparison from the R Limma package [20].

The R language version 3.6.1 edgeR package [21,22] was used to compare the mRNA expression of tumor and non-tumor samples from TCGA.

Studies comparing PRKACB between tumor and non-tumor samples in colorectal cancer were selected with a threshold of p-Value ≤ 1E-4, fold change ≥ 2 and top 10% gene rank in the Oncomine database (https://www.oncomine.org/).

The clinical data and PRKACB RNA Seq V2 data of 382 colorectal cancer patients (TCGA, Provisional) were downloaded from the cBioPortal database [23,24] (http://www.cBioPortal.org/), and the patients' information were matched with the sample ID by VLOOKUP index in EXCEL. After deleting some missing data, the PRKACB expression values were ranked from top to bottom and the median was taken as the cutoff point, these patients were then classified into a low expression group and high expression group to analyze the correlation between PRKACB expression with survival rates and clinical pathological characteristics.

Details of GEO series included in this analysis

RNA-Seq data information of 568 tumor samples and 44 non-tumor samples were downloaded from TCGA official website and the edgeR package [21,22] was used to compare the mRNA expression of the tumor and non-tumor samples to screen for differential expression genes (DEGs). The P-value <0.05 and |logFC|>1 were chosen as cut-off criteria. The Spearman coefficients of the DEGs and PRKACB were calculated, whilst DEGs with p-value<0.05 were defined as PRKACB-related genes.

The Database for Annotation, Visualization, and Integrated Discovery (DAVID, http://david.ncifcrf.gov) (version 6.8) [25] is an online functional annotation tool that we applied for Gene Ontology (GO) enrichment analysis, including biological process (BP), cellular components (CC), and molecular function (MF). The DAVID database was also used to a perform pathway enrichment analysis. P-value <0.05 was considered as the threshold.

STRING (http://string-db.org) (version 11.0) [26] is an online biological database for the prediction of known and unknown protein interaction relationships. The PRKACB-related genes were uploaded to the STRING website to analyze the interactions between those proteins. The minimum required interaction score was set to 0.400 (medium confidence) and the protein nodes undergoing no interaction with other proteins were removed. Next, the PPI pairs were inputted into the Cytoscape software (http://www.cytoscape.org) (version 3.7.1) [27] to construct a PPI network and the top 10 hub genes were identified in accordance with the Cytoscape plug-in (degrees ranking of cytoHubba).

The mRNA expression of 7 complete samples from the Colorectal Adenocarcinoma (TCGA, Provisional) database was used to conduct an analysis by the Co-expression online analysis function in the cBioPort database (http://www.cBioPortal.org/) [24]. P value <0.05 was considered as the threshold. Genes with Spearman correlation coefficients and PRKACB expression greater than 0.9 were screened and uploaded to Cytoscape software (http://www.cytoscape.org) (version 3.7.1) [27] to draw a gene co-expression network.

Associations between PRKACB and survival in CRC patients

By the same token, we performed subgroup survival analyses in different populations. As shown in Figure 4, downregulation of PRKACB was associated with poorer survival in males and white patients, while no significant differences were found in females and black patients. Moreover, low PRKACB levels significantly contributed to worse OS in CRC patients without non-mucinous cancers (HR=2.557(1.328-4.924), log-rank P=0.0108, Figure 4E) and the down-regulation of PRKACB was observed in patients with stage III-IV colorectal cancer (HR = 2.931 (1.357-6.333), log-rank P = 0.0145, Figure 4G), but not identified as risk factors for patients with stage I-II colorectal cancer (P> 0.05, Figure 4H).

Association between PRKACB and clinicopathological features in CRC patients

Over these past years, more and more data indicate that PRKACB is involved in the cancerization process of malignant tumors in different systems. PRKACB mutations and gene fusion of PRKACB can lead to adrenal, bile duct, liver, and pancreatic cancers [12,13], meanwhile down-regulation of PRKACB expression may be associated with poor survival in patients with non-small cell lung cancer. Makondi et al. found that targeting PRKACB may increase the responsiveness of colorectal tumors to irinotecan treatment [28], and Feng et al. also found pathological expressions of PRKACB in human colorectal cancer tissues infected with nucleobacteria [29]. Consistent with previous studies [30], our study showed that PRKACB had a significant discrepancy of expression in normal and tumor tissues of colorectal cancer, and we also depicted that down-regulation of PRKACB expression is a risk factor for declining 1, 3, and 5-year survival rates in patients with CRC. This was equally associated with poor patient-free survival and overall survival. Consequently, we can confirm that PRKACB plays an important role in patients with colorectal cancer and affects the prognosis of patients.

Gene co-expression network analysis established that PRKACB had a completely positive correlation with FAM167A, NRIP3, RASL11B, ST13P4, TMEM99, and a completely negative correlation with ALPP, C3ORF70, JUND, and ZBTB7A. It has been confirmed by studies that NRIP3 and RASL11B play a role in suppressing cancer proliferation in breast cancer and renal cell carcinoma [31,32]. Meanwhile ALPP, JUND, ZBTB7A in gastric cancer, prostate cancer, breast cancer [33-35] and other cancers promote the progress of cancer. Thence, we can boldly speculate that PRKACB plays a synergistic role with these tumor suppressors in inhibiting tumor growth. On the contrary, oncogenes antagonize the tumor-suppressive effect of PRKACB.

Many studies have confirmed that microRNAs can regulate the expression of PRKACB [29,36-38], affect cell proliferation, adhesion, and metastasis, and eventually bring about the development of tumors. Also, studies have found that antisense oligodeoxynucleotides targeted to protein kinase subunits induce growth arrest, apoptosis, and differentiation in a variety of cancer cell lines both in vitro and in vivo [39]. Similarly, we were able to regulate the development of colon cancer by targeting PRKACB, providing an important theoretical basis for the development of colon cancer chemotherapeutic drugs and new anti-EMT therapies.

Characteristics of CRC patients between PRKACB high and low groups 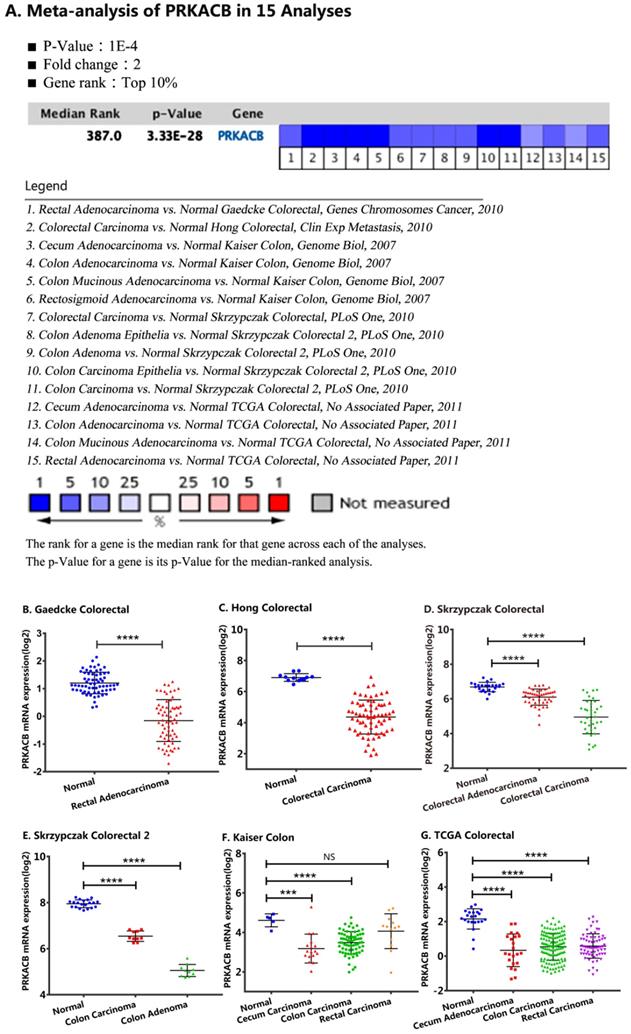 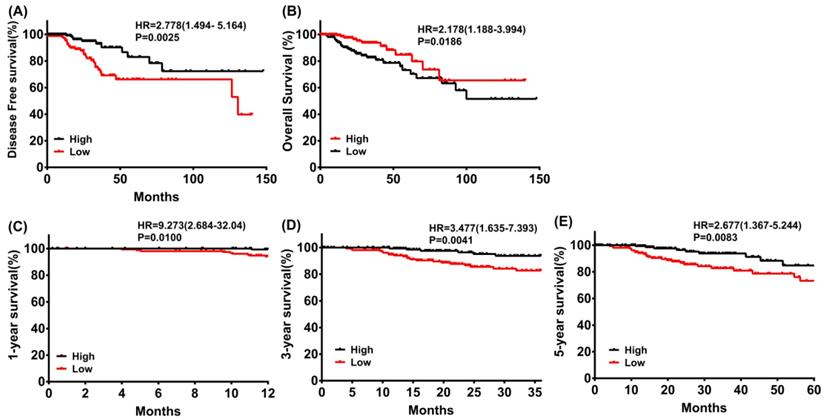 The protein kinase cAMP-dependent catalytic subunit β (PRKACB) encoding the cAMP-dependent protein kinase catalytic subunit β (PRKACB) is a member of the serine/threonine protein kinase family [7]. Activation of PKA catalytic activity is initiated by any signal causing an increase in intracellular cAMP concentration. The traditional view of PKA activation is that two cAMP molecules bind to each R subunit, causing a conformational change in the R subunit dimer, and the C subunits are released and become catalytically active through exposure of their active sites [40]. PKs catalyze the transfer of phosphate groups onto Ser, Thr, or Tyr residues of target proteins. Phosphorylation of substrates represents a key regulatory mechanism in all eukaryotic cells41 and the various PKs target different substrates with a multitude of biological effects. In addition, studies have shown that PKA-mediated tamoxifen resistance in breast cancer is caused by 305 serine (S305) phosphorylation of Erα [42]. Similarly, phosphorylation of PRKACB has also been found in neurological diseases [37]. From a physiologic aspect, PRKACB may mainly regulate protein phosphorylation/dephosphorylation through the cAMP pathway. Unfortunately, we are yet to conduct experimental studies exploring the potential carcinogenic mechanism of PRKACB in the development of liver cancer. Even after taking into account previous reports, we are pragmatic on suggesting the hypothesis that low expression of PRKACB leads to poorer prognoses in CRC patients. 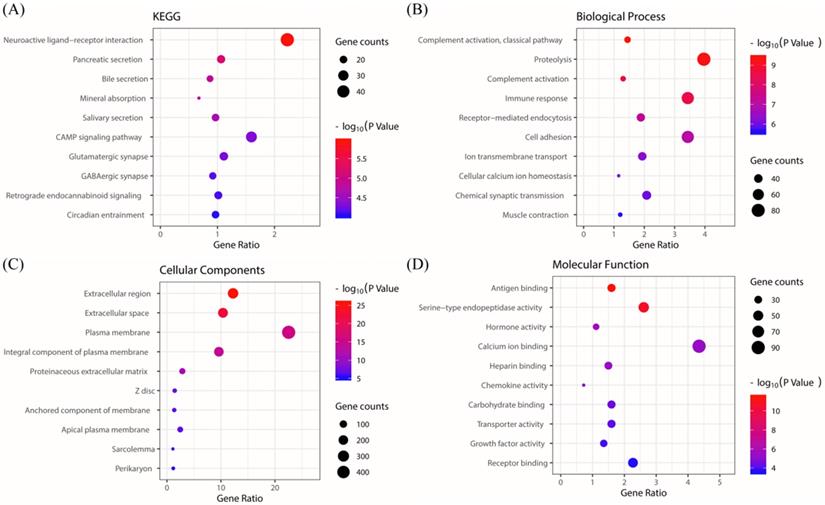 Hub genes of the PPI network. The darker the color, the bigger the degrees. 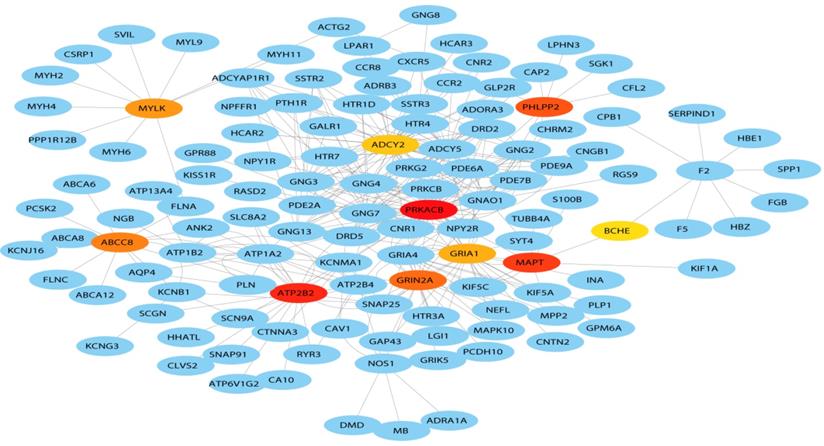 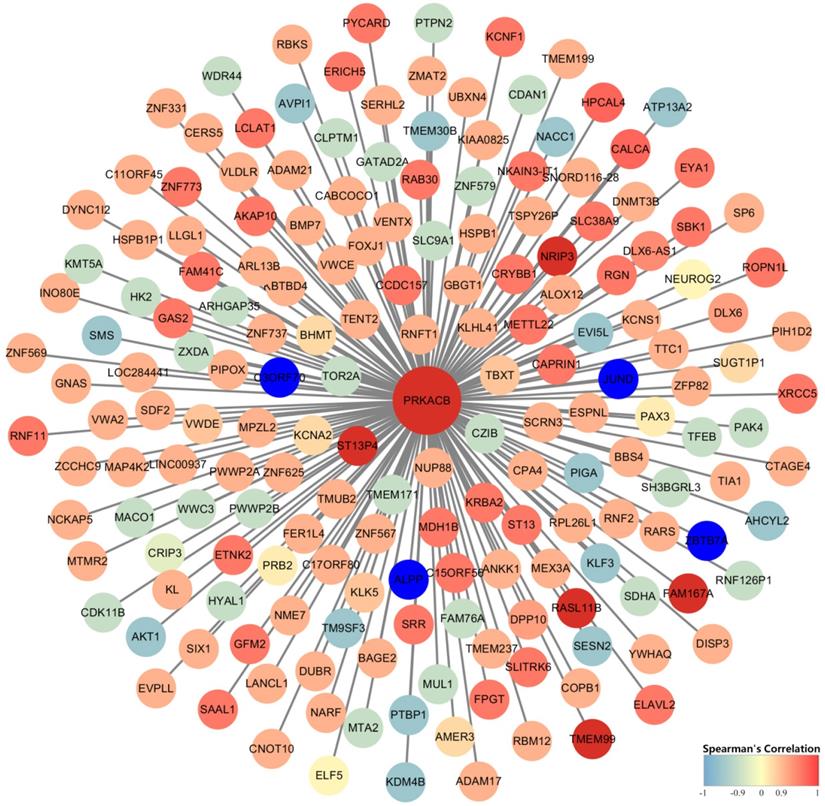