The Prevalence and associated Factors for Liver Metastases, Development and Prognosis in newly diagnosed Epithelial Ovarian Cancer: A large Population-Based Study from the SEER Database

Background: Primary Epithelial Ovarian Cancer (EOC), a malignant gynecologic disease, is considered one of the leading causes of mortality in women. The development of Liver Metastases (LM) in women with primary ovarian cancer commonly results in a poorer prognosis. This retrospective population-based study aims to measure the prevalence, prognostic factors, and associated risk factors for epithelial ovarian cancer patients with liver metastases (EOCLM).

Materials and Methods: The current study cohort of patients based on the Surveillance, Epidemiology, and End Results (SEER) database identified with primary ovarian cancer between the years 2010 and 2016. A chi-square test was employed to compare Metastatic differences among demographic and clinical factors. Univariable and multivariable logistic regression analysis models were used to predict related prognostic factors for LM development. 7-year Kaplan-Meier curves were applied to compare the survival patterns of patients with and without LM. The Multivariable Cox regression model was used to estimate potential risk factors associated with LM related deaths.

Conclusion: The retrospective cohort study showed that women with primary EOC had some high-risk factors associated with LM. LM can intensely decrease the survival of EOC patients. The findings of our research provided estimates for LM occurrence prediction and potential prognostic factors of EOC with de novo LM development. These findings can be useful for follow-up strategies, guidelines for screening, and treatment of EOCLM.

Epithelial Ovarian Cancer considered among the fatal gynecologic malignancies of the female reproductive system, with expected 22,530 new cases and 13,980 deaths to occur in 2019 in the US [1,2]. Ovarian cancer accounts for 2.5% of all fatalities among women. Almost 60% of EOC patients diagnosed at a distant stage. The 5-year survival of EOC patients is still less than 47% [3]. The lifetime risk of ovarian cancer incidence is 1.39%, and the lifetime risk of death is 1.04% [2]. The majority of EOC patients diagnosed with advanced stages (III and IV) due to no practical screening tests and symptoms are distinct. About 12-33% of EOC patients will be diagnosed with FIGO stage IV, de novo Metastases disease at initial diagnosis [4]. Liver Metastases found in up to 50% of patients dying of EOC [5,6]. Recent studies noted liver Metastases reported as the most common cause of stage-IV disease in EOC patients [4,7]. Hepatic resection of patients with primary ovarian cancer with liver metastases could benefit in terms of survival [8]. Perihepatic Metastases in advanced EOC patients occurs through the peritoneal spread of tumor implants on the liver surface. Sometimes, perihepatic metastases can invade the liver parenchymal [9]. Several studies suggest surgery and platinum-based chemotherapy as the primary treatments associated with overall survival [10,11].

However, there are no LM screening guidelines for EOC patients with de novo LM. Hussain SM et al. stated that MRI is commonly used and considered optimal diagnostic modality for the assessment of alleged hepatic metastases [12]. Other diagnostic modalities that often used are CT and PET-CT. Still, it could not identify the metastatic tumors less than 1.0 cm. also MRI, was not recommended for ovarian cancer patients' routine assessment in current guidelines for EOC patients screening [13,14].

Clinico-demographic characteristics of EOCLM patients, in the early estimation of the prognostic factors associated with LM can help the physicians to develop treatment strategies. Identification of potential risk factors and the importance of different treatment plans on EOCLM need to be assessed to provide alternative care and guidelines for the treatment of EOCLM patients based on a large population. Nevertheless, some studies with a minimal number of ovarian cancer patients with liver metastases were published before.

The Surveillance, Epidemiology, and End Results (SEER) is a publicly available cancer database that covers 30% of the United States population. The SEER system routinely records data on patient demographics, tumor characteristics, tumor morphology and histology, general treatment, stage at diagnosis, survival time, and follow-up. The current study aimed to identify the risk factors associated with de novo LM in EOC and to inspect the prevalence and survival trends of EOCLM patients. The study covers patients between the years 2010 and 2016 since the details of Liver Metastases (LM) were not available before 2010.

Patients diagnosed by death certificate or autopsy only, patients with unknown information of follow-up or LM and patients without LM but lung, Bone, and Brain metastases were excluded from the study cohort. The detailed selection procedure is summarized in Figure 1. All data were extracted using SEER.Stat 8.3.5 software.

Categorical variables are reported as counts (percentages). The chi-square test was used to analyze the differences between the subgroups. A P-value of less than 0.05 was considered statically significant. Univariable logistic regression was employed to predict potential risk factors for EOC patients with de novo LM. The factors statistically significant at the significance level of <0.05 were adjusted for further analysis using multivariable logistic regression.

The primary endpoint of the study cohort was to determine the overall survival of EOC patients with LM. A patient's survival was defined as the date of diagnosis until death from any cause. Kaplan-Meier curve method was employed to estimate overall survival, and the log-rank test was applied to evaluate the survival differences. Univariable Cox analysis was performed to investigate the prognostic factors for LM. Factors statistically significant at (p<0.05), in Univariable Cox Regression analysis, were then further evaluated using the Multivariable Cox model to classify the prognostic factors associated with overall survival among EOC patients with LM. All statistical analyses are performed using R version R-3.6.1 and Kaplan Meier curves were drawn using the R package ggplot2 [18].

Flow-chart for patient selection in the present study. 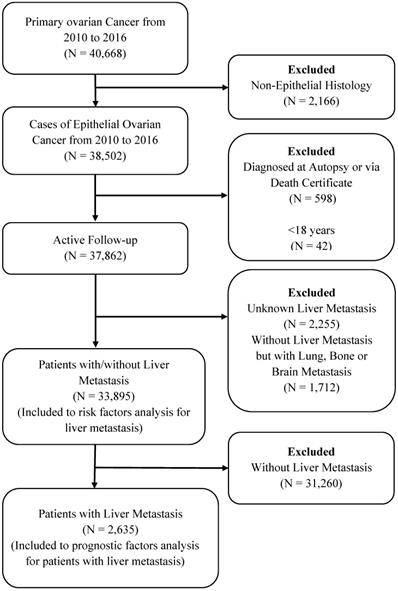 The Incidence of Liver Metastases (LM)

a P-value for the χ2 test for the distribution of categorical variables by liver metastases (LM);

Factors with Unknown data were adjusted for the logistic regression model.

The above factors with Unknown data were removed from Kaplan-Meier and Cox regression models.

To our knowledge, this is the first large population-based study to explore the demographic and clinical characteristics, potential risks, and prognostic factors of LM from EOC that have been analyzed premortem up to this point. Based on our retrospective cohort, 7.77% of primary EOC patients initially diagnosed with de novo LM. Winter et al. reported that Hepatic parenchymal Metastases accounted for 18% and was the second most common cause of stage-IV disease in a large GOG study [19]. The metastatic rate to the liver in our study was lower than the previous studies, as most of the studies restricted to the distant stage (stage-IV) disease. The prognostic role of the LM pattern in EOC patients remains to be explained. Potential risk factors identification is needed to investigate for LM progression and screening performance among high-risk EOC patients. 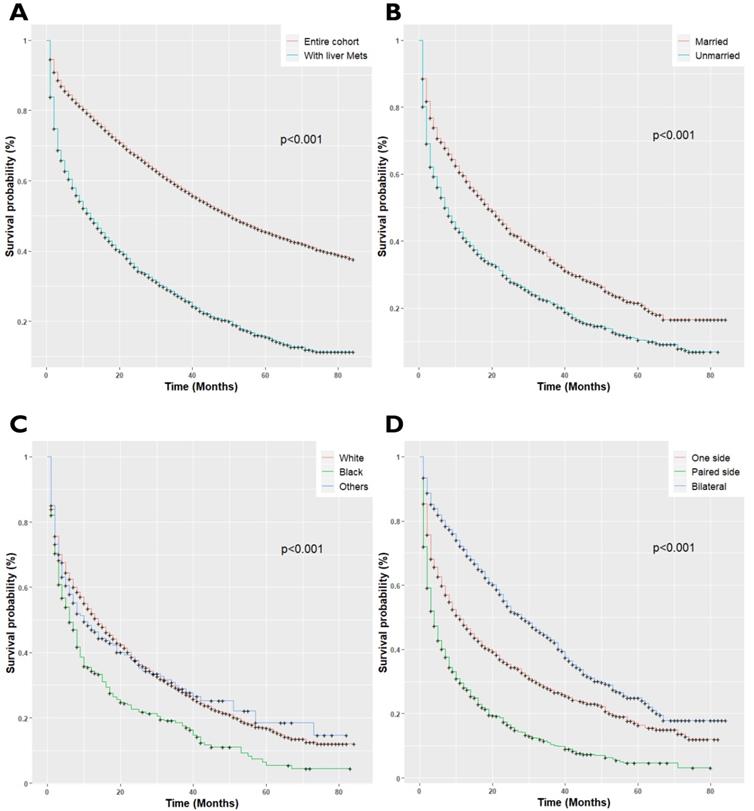 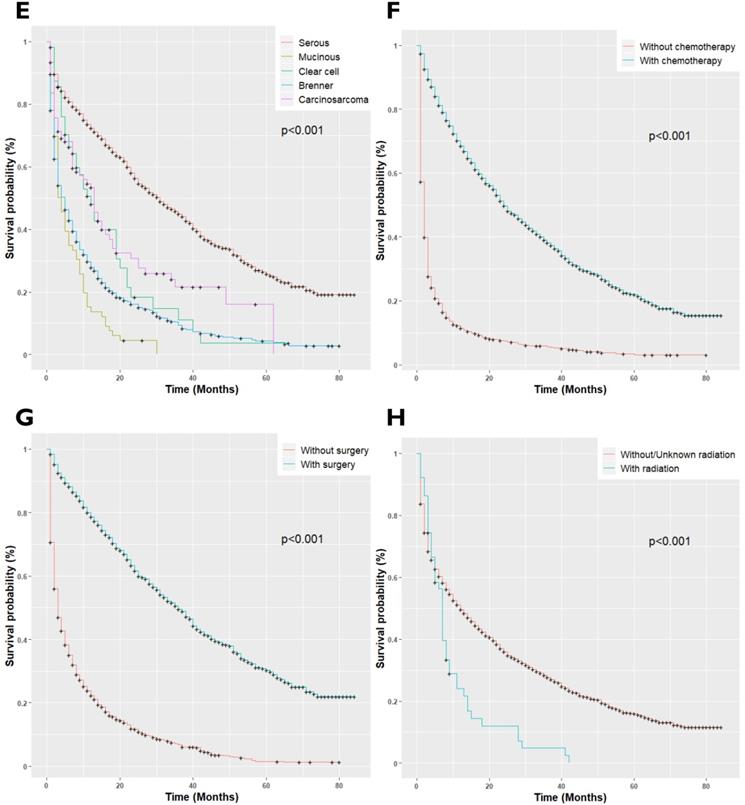 In our study, EOCLM patients who underwent primary surgery had higher survival compared to those who did not experience this procedure. Almost 47% of the patients underwent surgical cytoreduction of the primary site; the data still suggest that the surgical approach of primary cytoreduction in advanced-stage disease is interrelated with improved overall survival of EOCLM patients. Winter et al. observed a prolonged survival in EOCLM patients who received primary cytoreductive surgery [19]. Additionally, prior studies also suggested that cytoreductive surgery of primary site of EOC patients with FIGO stage-IV disease more likely to have immense advantages [10,26,27].

Chemotherapy is commonly employed in patients with advanced-stage EOC patients. 66.33% of patients in our study received chemotherapy. Our results suggest that chemotherapy offers enormous benefits in the adjuvant treatment of women with EOCLM. In the current analysis, it was observed that chemotherapy admiration was associated with highly improved survival. It is prominent since this strengthens the reason for better assumptions for median progression-free and overall survival. The study findings are similar to those in other regional or multicenter studies that analyzed distant-stage epithelial ovarian carcinomas separately [28-33].

One of the main strengths of the current study is the fact that it presents a large number of LM patients from nationwide registries. Moreover, the study period spanned seven years with active follow-up. Conversely, several limitations should be noted. First of all, the SEER database does not provide information on the administration of hepatic resection during cytoreductive surgery for primary EOCLM patients. Comorbidity profiles of the patients, such as hepatic involvement, the liver parenchymal invasion, hematogenous dissemination, and patient's preference to receive primary or secondary metastatic surgery, which may partially affect the precision of the results. Secondly, our results showed a strong association between the surgery of the primary site and improvement in survival among EOCLM patients. However, the information regarding the history of the disease, and treatment morbidity is lacking. Thirdly, the SEER database does not provide information regarding those EOC patients who have developed liver metastases later during follow-up. Lastly, one of the limitations of the current research was the lack of validation of the present study through an independent cohort as actively followed EOC patients with LM lacked in other databases. Therefore, the observed LM of the current research has to be interpreted as an underestimate of the real figure.

In conclusion, our study clarified the epidemiology of EOCLM in US women. The survival of women with liver Metastases who underwent surgery of primary site and chemotherapy exceeds that of patients without surgery or chemotherapy. Besides, radiation therapy was negatively associated with the overall survival of the patients. The prognosis of EOCLM patients is poor, with a median survival of 12 months. Non-serous histology-types, the mucinous, clear cell, Malignant Brenner Carcinoma, NOS, and Carcinosarcoma, were positively associated with overall death. Comparatively, good survival was observed in the white race, married women, and those who had one-side or bilateral tumors. The limitations of the present study support the need for related studies to further confirm the results in the future.

We want to thank the SEER public database for making the ovarian cancer data available. The present study was sponsored by the National Natural Science Foundation of China under grant number: 81773551.

The SEER is a publically available database. The data does not require informed patients' consent. Our study used de-identified secondary data, which was deemed exempt from review by the ethics board of the Harbin Medical University.

9. Invasion LP, Ishill N, Soslow RA, Chi DS. Perihepatic Metastases from Ovarian Cancer : Sensitivity and Specificity of CT for the Detection of Metastases with and Those without Purpose : Methods : Results : Conclusion : 2008; 248: 511-7