Efficacy and Safety of Apatinib Combined with Etoposide in Patients with Recurrent Platinum-resistant Epithelial Ovarian Cancer: A Retrospective Study

Purpose: Advanced epithelial ovarian cancer (EOC) eventually develops into a recurrent platinum-resistant disease. The response to standard treatment and prognosis in patients with EOC is generally unsatisfactory. This study aimed to assess the efficacy and safety of apatinib combined with etoposide in patients with recurrent platinum-resistant EOC.

Materials and Methods: This is a single-center, retrospective, observational study. We have reviewed a total of 33 patients with recurrent platinum-resistant EOC from July 2017 to July 2018, who were regularly treated with apatinib and etoposide until disease progression or unacceptable toxic effects occurred.

Conclusion: The efficacy of apatinib combined with etoposide is encouraging in patients with platinum-resistant EOC. Most adverse events of this combined therapy were mild and tolerable. Severe mucositis oral was not rare, which needs more precautions.

Ovarian cancer is the most common cause of gynecological cancer-associated death. Over 295,000 women developed epithelial ovarian cancer (EOC) worldwide in 2018, of whom over 184,000 died [1]. Approximately 70% to 80% of patients underwent advanced EOC due to no noticeable and specific symptoms of early ovarian cancer [2]. Although surgery and platinum-based cytotoxic chemotherapy can be curative for patients with EOC at an early stage, most women with advanced EOC develop episodes of recurrences with the progressively shorter disease-free interval [3] and platinum resistance [4]. Patients with platinum-resistant ovarian cancer showed lower response rates of platinum or non-platinum drugs than platinum-sensitive patients did, whose prognosis was also poorer.

Angiogenesis is a significant factor in the oncogenesis, development, and metastasis of malignant tumors [5]. Apatinib, a targeting inhibitor of vascular endothelial growth factor receptor 2 (VEGFR2), is independently researched and developed as an anti-angiogenic drug in mainland China. It was approved in the treatment of advanced gastric cancer and gastroesophageal junction adenocarcinoma by the National Medical Products Administration (NMPA) in China. Apatinib also shows antitumor activities in several other malignant tumors, such as lung cancer, liver cancer, and ovarian cancer [6-9]. In a previous multi-center phase II study, 29 patients of platinum-resistant EOC accepted apatinib monotherapy, with the OS of 41.4% (95% CI, 23.3%~59.4%) and the median PFS of 5.1 months (95% CI, 3.8~6.5) [10]. No complete response (CR) case of platinum-resistant EOC has been reported yet, and the prognosis is still not up to expectation.

Anti-angiogenesis therapy combined with single-agent chemotherapy has been proved to be associated with a better clinical outcome in patients with ovarian cancer [11]. Etoposide is a topoisomerase inhibitor that suppresses the activity of DNA topoisomerase II and forms a stable complex of DNA-TopoII-EP. It executes cytotoxicity by fragmenting DNA double-strand structure and is applicable in the treatment of recurrent ovarian cancer [12]. It was reported that the overall response rate and clinical benefit rate of oral etoposide were 19.2% and 40.4% in 52 platinum-resistant EOC patients, respectively [13]. However, 13.4% of patients suffered grade 3~4 haematologic or non-haematologic adverse events, indicating slightly high toxicity of etoposide. The combined therapy of apatinib and etoposide was hence investigated in patients with platinum-resistant EOC for higher efficacy and better safety. Furthermore, since both apatinib and etoposide have oral preparations, this combination is an ideal option for patients who prefer home administration rather than hospitalization. In this retrospective study, we reviewed patients who were diagnosed as recurrent platinum-resistant EOC and treated with apatinib combined with etoposide. Based on the observation, we analyzed the efficacy and safety of the combined apatinib and etoposide treatment.

Patients with recurrent platinum-resistant EOC were reviewed from July 2017 to July 2018 in Hunan Cancer Hospital. Eligibility criteria included age in the range between 18 and 70; diagnosis histologically or cytologically confirmed as EOC; patients developing progressive EOC after cytoreductive surgery and combined chemotherapy; patients resistant to the first-line chemotherapy; at least one measurable solid tumor (> 10 mm) used for efficacy evaluation; Eastern Cooperative Oncology Group (ECOG) performance status 0-2. Exclusion criteria included a diagnosis of other malignancies; previous exposure to the combination of apatinib and etoposide; Karnofsky score below 60; significant abnormality in routine blood test (including neutropenia, thrombocytopenia, and anemia), hepatic and renal function examinations, or electrocardiogram; pregnant and lactating patients. This study has been approved by the Institutional Ethics Committee of Hunan Cancer Hospital and was performed following the Declaration of Helsinki. All patients provided written informed consent before the therapy procedures.

Waterfall plot for the best percentage change in target lesion size (n=33). The color indicates the type of response. The dashed lines at 20% and -30% represent the boundary for the determinations of progressive disease and partial response, respectively. 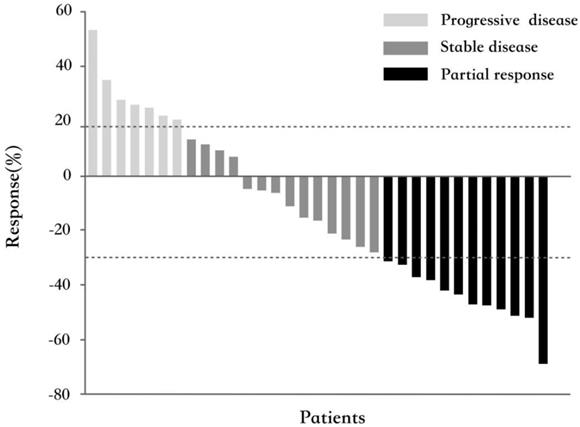 Clinical characteristics of the patients (n=33) at the baseline 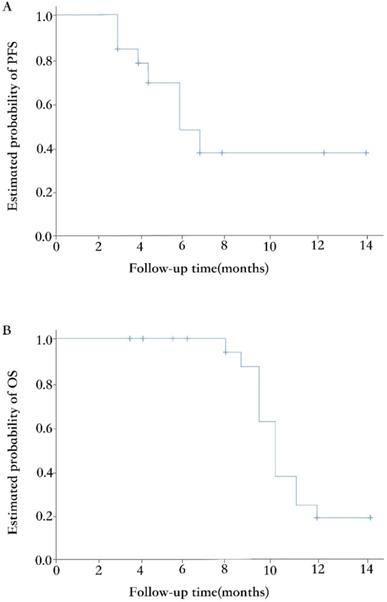 All patients experienced one or more treatment-related adverse events (Table 2). Mucositis oral was the most common one, with a high incidence of 60.6%. Four patients were unable to eat normally due to grade 3 or 4 mucositis oral and discontinued the treatment. Other relatively common adverse events included hand-foot syndrome (45.5%), hypertension (39.4%), nausea or vomiting (30.3%), neutropenia (24.2%), fatigue (21.2%) and thrombocytopenia (21.2%). Although 8 patients (24.2%) underwent dose reduction of apatinib because of severe adverse events (grade 3 or 4), the majority of patients (63.6%, 21 of 33) simply experienced mild and controllable adverse events of grade 1 or 2. These adverse events were consistent with those described in the drug specification. No unreported drug adverse reactions have been observed in this study.

Platinum-resistant recurrent ovarian cancer is usually treated with non-platinum or second-line platinum drugs due to its insensitivity to first-line platinum drugs. Angiogenesis is a key mechanism for generation, proliferation, local infiltration, and distant metastasis of tumor cells [16]. It is regulated by the interaction between vascular endothelial growth factors (VEGFs) and their receptors (VEGFRs). New drugs or therapeutic strategies targeting neovascularization are of great interest in the management of ovarian cancer. Evidence indicates that blockage of VEGF/ VEGFR pathway by competitively binding to VEGF or interfering with certain domains of VEGFR would be a promising treatment regimen. VEGF-A and VEGFR-2 have been proved to be closely related to the pathological angiogenesis of tumors. Bevacizumab, a recombinant humanized monoclonal IgG1 antibody of VEGF-A, is the first approved anti-angiogenesis drug for ovarian cancer, applicated alone or in combination with cytotoxic chemotherapy. The response rate of bevacizumab in patients with platinum-sensitive or platinum-resistant recurrent ovarian cancer was only acceptable of 20%~30% [4]. Application of Bevacizumab also requires frequent hospital visits and long-term intravenous administration, which may decline patients' compliance. Targeting drugs with higher responses and more convenient oral preparation are desired.

Recently, many VEGFR-2 inhibitors have been developed, such as sorafenib, cediranib, and apatinib [17-19]. Apatinib is a novel oral angiogenesis inhibitor targeting the intracellular ATP binding site of VEGFR2. It decreases the density of tumor micro-vessels, slows down, and even stops the tumor growth and development by inhibiting VEGFR2 [20]. Apatinib has been licensed for advanced gastric adenocarcinoma and gastroesophageal junction adenocarcinoma. However, the application of apatinib in ovarian cancer is still in the stage of the clinical study. There are several case reports and clinical studies (n=9~29) focused on apatinib therapy in patients with recurrent platinum-resistant ovarian cancer [8-10,21]. As reported in the above literature, the ORR and DCR of apatinib monotherapy could reach 18.2~41.4% and 47.1~81.8% respectively [8-10]. The ORR of apatinib monotherapy was higher than that of other single-agent drugs, such as etoposide, vinorelbine, irinotecan, oxaliplatin and gemcitabine, which was only 10~37% [22, 23]. However, it is still less than ideal and no CR case has been reported. The reason may be the limited efficacy of apatinib monotherapy. Attempts to combine apatinib with other therapies are performed to achieve higher or even complete responses.

Patients reviewed in this study accepted oral etoposide 50 mg once daily (days 1-21 of a 28-day cycle) as the initial dose, which was a conventional tolerable dosage according to our previous clinical observation. During the whole treatment process, no patient discontinued the treatment because of the adverse events of etoposide. Apatinib is suggested as 500 mg once daily in patients with solid tumors by some clinical trials [26,27]. The Chinese clinical consensus of apatinib in the treatment of gastric cancer also recommends apatinib of 500 mg once daily as an initial dose in underweight and feeble female patients, aged patients, and those with a poor hematopoietic capacity of bone marrow. In our study, the initial dose and recommended dose of apatinib were both 500 mg once daily. Most treatment-related adverse events of the combination therapy were mild and could be well managed by suspending the administration, reducing the dose, and treating symptomatically. Eight patients underwent dose modifications because of severe adverse events (grade 3 and 4), and half of them discontinued the treatment due to eating problems caused by severe mucositis oral. Mucositis oral was the most common adverse event with the incidence of 60.6% in our study, while it was less frequent (only 48%) in Lan's study [25]. It also seemed more severe in our cohort that three patients underwent severe mucositis oral of grade 4 whereas no patient did in Lan's study [25]. Our clinical data show a similarly high incidence of mucositis oral (over 80%) in patients with ovarian cancer after the treatment of apatinib. Even though intensive oral care was given preventively, more than half of patients still developed mucositis oral of grade 2 or higher. More precautions and attention should be taken against severe mucositis oral in patients with the treatment of apatinib.

In conclusion, the combination therapy of apatinib and oral etoposide shows promising efficacy in patients with recurrent platinum-resistant EOC. For most patients, apatinib is a safe oral agent that can be added to current chemotherapies in EOC patients. Only a few patients could not tolerate the toxicity of apatinib, such as severe mucositis oral. Further randomly controlled prospective cohort studies will be performed to provide more evidence for the indication of apatinib in EOC.

This work was supported by the Hunan Provincial Natural Science Foundation of China (No. 2018JJ3773). We also thank Jiangsu Hengrui Pharmaceuticals Co for offering a discount on apatinib.

This study was approved by the Institutional Ethics Committee of Hunan Cancer Hospital. All procedures performed in this study involving human participants were in accordance with the ethical standards of the institutional and national research committee and with the 1964 Helsinki Declaration and its later amendments or comparable ethical standards.