Objectives: The present study aimed to evaluate the early mortality rate and associated factors for early death in bone and soft tissue tumors, and to construct predictive nomogram.

Methods: Patients diagnosed between 2010 and 2015 in the Surveillance, Epidemiology, and End Results (SEER) dataset were enrolled. The early death (survival time ≤ 3 months) rate was calculated and associated risk factors were evaluated by the logistic regression models. The significant factors were used to construct predictive nomograms.

With the development of treatment strategies, the survival of patients with bone and soft tissue tumors has been significantly improved. In the previous study, the five-year relative survival of soft tissue sarcomas reached to 61.6% (95%CI 58.6-64.4) and it was 73.1% (95%CI 66.6-78.6) in bone sarcomas [3]. To improve the long-term survival, potential risks of complications were investigated in Ewing sarcoma [5]. A prognostic model was further established to predict the 5-year overall survival of patients with extremity osteosarcoma [6]. However, seldom study looked into the patients who died early after diagnosis. Patients with high risk of early death should be timely identified so that individualized treatments and/or supportive care can be scheduled to improve their survival and life quality.

A previous study prospectively reported 595 (12%) cases died within 1 year after diagnosis of bone and soft tissue sarcoma [7]. In another study regarding to the advanced soft tissue sarcoma, authors carried out a retrospective analysis and developed a prognostic model for early death within 3 months [8]. The performance status and distant metastasis were retained as risk factors by logistic regression analysis in the study. The rates of early death were 8.6% and 4.5% in two cohorts of soft tissue sarcoma. Higher rate of early death was noticed in patients with more risk factors [8]. In the latest study based on 2,432 osteosarcoma and 1,619 Ewing sarcoma cases aged from 0 to 49 years, the average mortality rate at 3 months was 1.7% and 2.0% in osteosarcoma and Ewing sarcoma, respectively. The mortality rate at 6 months was similar to that at 3 months [9]. These studies provided us the insight into the early mortality. However, to our knowledge, there were no studies thoroughly investigating the 90 days mortality in bone and soft tissue tumors. The early death predictive model in bone and soft tissue tumors was needed.

Based on a large cohort from Surveillance, Epidemiology, and End Results (SEER) datasets, the current study was conducted to evaluate the incidence of early death in patients with bone and soft tissue tumors. According to the previous literature, the early death was defined as overall survival time ≤ 3 months after initial diagnosis [8]. Related risk factors were further identified and the factors-based nomogram was constructed to predict the early death.

Cancer is a reportable disease in every state of the USA and the data in the SEER database does not need informed patient consent. The present study was complied with the 1964 Helsinki Declaration and its later amendments or comparable ethical standards.

The SEER database (https://seer.cancer.gov/) is compiled by the National Cancer Institute and covers approximately 28% of the population in USA. The data used in the present study was obtained from the latest version by April 2019, which was named as Incidence - SEER 18 Regs Research Data + Hurricane Katrina Impacted Louisiana Cases, Nov 2018 Sub (1975-2016 varying). The flow-chart of the selection criteria was listed in Figure 1. Due to the low incidence and unfavorable prognosis, patients with soft tissue tumor originated from heart were excluded from the present study [10,11]. Meanwhile, patients diagnosed at autopsy or via death certificate were excluded. A total of 23,587 patients with bone and soft tissue tumors diagnosed between 2010 and 2015 were included.

The primary outcome in this study was all-cause, cancer-specific and non-cancer specific early death. Variables (with P<0.05) in univariable logistic regression were further analyzed using a multivariable logistic regression model. Significant variables in the multivariable logistic regression model were included in the construction of the predictive nomograms for all-cause, cancer-specific and non-cancer early death. The performance of the nomogram was evaluated by the receiver operating characteristics (ROC) and the greater area under the curve (AUC) close to 1.0 indicated more perfect ability of discrimination. To evaluate the calibration of the nomogram, the calibration plots were produced by bootstrapping with 1,000 resamples. The relationship between the observed and predicted probabilities of all-cause, cancer-specific and non-cancer early death was described graphically.

All statistical tests were two-sided, and P<0.05 was considered significant. All the statistical analyses were conducted by the IBM Statistical Package for the Social Sciences (SPSS) version 23.0 software package for Windows (SPSS, Inc. Chicago, IL, USA).

Flow-chart for patient selection with bone and soft tissue tumor. 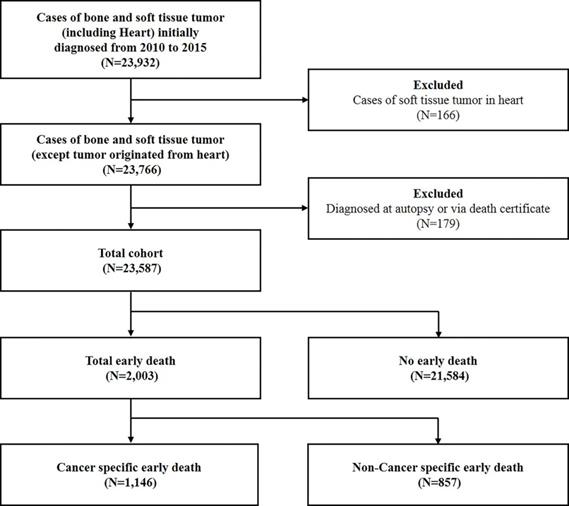 Performance of the nomogram for predicting early death

According to the results in the multivariable logistic regression model, the following variables were selected in the construction of the predictive nomograms for total early death: age, gender, race, tumor location, tumor differentiation grade, laterality, SEER Stage, T stage, brain metastasis, lung metastasis and surgery. The same methods were used for selecting variables in the construction of nomograms for cancer-specific and non-cancer-specific early death.

Older age was found to be related with higher odds of early death in the present study, especially for the non-cancer specific early death with age older than 50 years. As reported in the previous study, age older than 19 years was an independent factor of early death at 3 months in patients with osteosarcoma [9]. Increased negative influence of older age was also revealed in other studies. In studies evaluating the cut-off age of 40 or 50 years for osteosarcoma, older patients showed worse survival [12,13]. Besides, the tumor in trunk was more commonly found in older patients and was associated with worse survival in the previous studies and our analysis. Older patients who showed axial tumors and worse survival were revealed in the Ewing sarcoma [14] and soft tissue sarcoma [15]. The difficulty of complete resection of tumors in axial trunk may be the potential reason leading to early death. Based on the results in the present study for patients older than 50 years, non-cancer specific causes to death should not be neglected.

Social characteristics have been studied and some factors showed significant impact on the survival of cancer patient. Previous studies showed that support from the families can help against cancer and unmarried patients experienced worse long-term survival [16]. There was a small but independent effect of unemployment on 3-month mortality rate (OR: 1.06, 95% CI 1.01-1.10) for patients with osteosarcoma [9]. Low-income patients with bone and soft tissue sarcoma showed decreased survival regardless of disease stage [17]. However, these trends were not confirmed in the present study. The influence of the socioeconomic characteristics should be further evaluated.

As to the tumor behaviors, higher tumor differentiation grade (III and IV), reginal and distant stage were associated with higher odds of total, cancer-specific and non-cancer-specific early death. All these serious aggressive factors should be considered in the estimation of early death. Although the negative influence of pulmonary or non-pulmonary metastases on long-term survival was reported in previous studies [14,15,18]. In the present study, it was the first time that the correlation between the metastasis to brain or lung and cancer-specific early death was revealed. Thus, evaluation for metastasis was encouraged in the patients with high risk of early brain and/or lung metastases, especially in patients with grade III or IV tumor.

Contrary to the abovementioned risk factors, surgical intervention was found to be significantly correlated with the decreased incidence of total, cancer-specific and non-cancer-specific early death. To improve survival and life quality, surgery has been accepted to be one of the fundamental treatments for bone and soft tissue tumors [19,20]. Therefore, aggressive surgery should be encouraged for the eligible patients to decrease the development of early death. 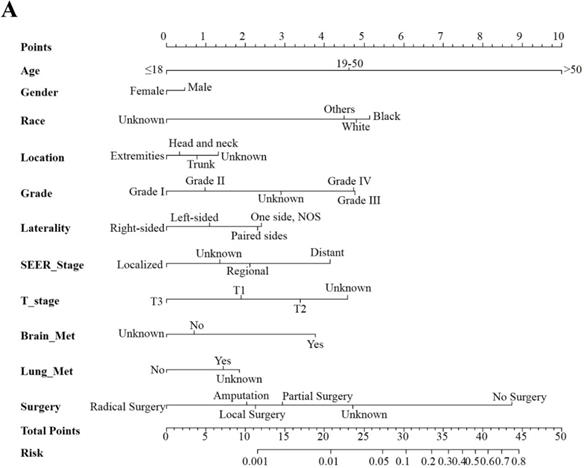 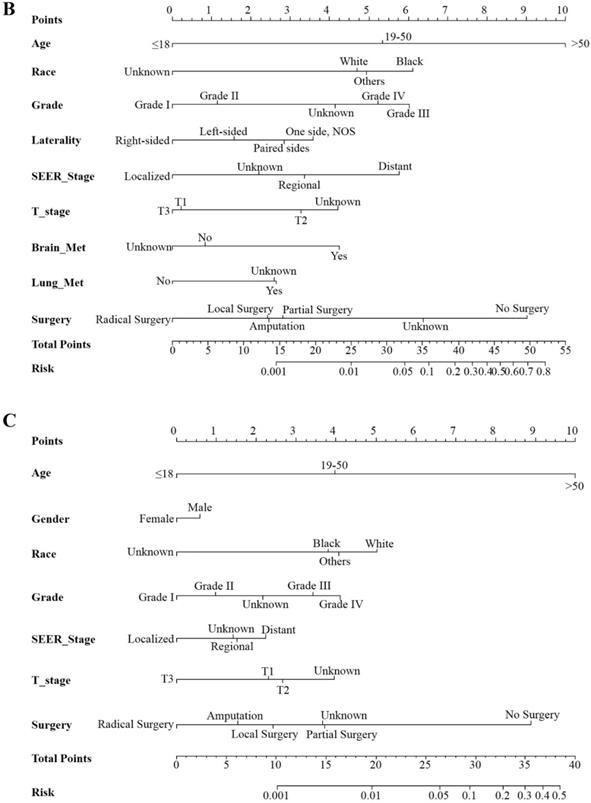 In our previous research, the nomogram integrating related risk factors is a good predicting tool for the estimation of early death in stage IV cancer [21]. In the present study looking into the early death in patients with bone and soft tissue tumor, the constructed nomograms were proved to be with satisfactory predictive ability. Thus, such tool can be potentially be applied as the auxiliary screening tool for both physicians and patients. The targeted treatment regimens can be further scheduled for patients with high risk of early mortality.

The present study has some limitations. Many histological types of bone and soft tissue tumors were recorded in the SEER datasets. The risk factor analyses in each type were not thoroughly conducted. Thus, prediction should be performed regarding to specific tumor. Factors such as performance status and other treatments were not investigated in the present study due to the unavailable records in the SEER datasets. The preliminary findings and predictive models should be further externally validated. 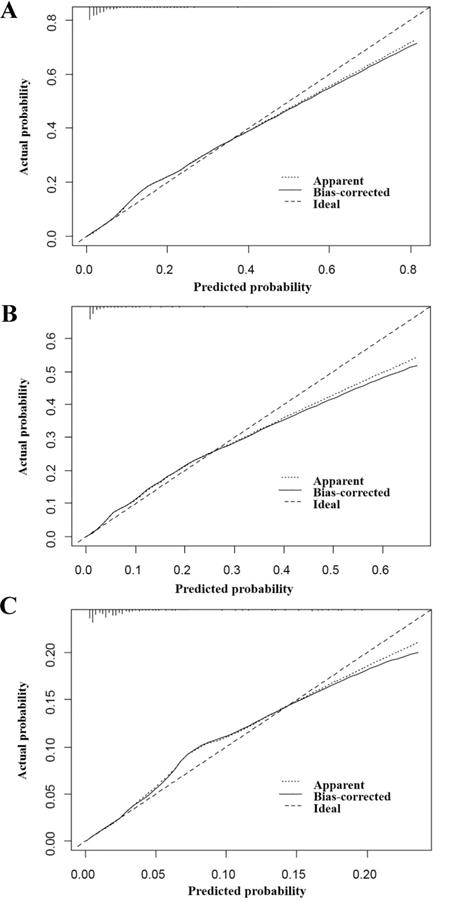 In conclusion, based on the large population analysis, the incidence of early death in bone and soft tissue tumor was found to be approximate 16%. Older age (19-50 and >50 years), grade (III and IV) and reginal or distant stage were associated with higher odds of early death. Surgery can decrease the occurrence of early death. The constructed nomograms based on the risk factors can be used to estimate the odds of the early death. Targeted screening and treatment regimens can be considered in the patients with high risk after nomogram evaluation.