Differences in the cellular elasticity of cancer cells may be a characteristic of carcinogenesis or may be part of a survival strategy to adapt to new environments. Carcinogenesis is the process by which normal, healthy cells transform into cancer cells. Carcinogenesis proceeds in multiple steps: initiation, promotion, and progression over a period of several decades [6]. Carcinogenesis is caused by DNA mutations that alter the normal balance between cell proliferation and cell death [7]. The chemical or structural changes that occur during carcinogenesis may result in low elastic property of cancer cells. Carcinogenesis affects not only the cells but also the surrounding extracellular matrix (ECM) [8]. Highly proliferative cancer cells vigorously secrete growth factors that stimulate fibroblasts, key regulators of ECM composition and organization. Activated fibroblasts overproduce ECM proteins such as collagen I and fibronectin, which may result in ECM stiffening. The mechanical stress exerted by a stiff ECM can regulate cancer cell properties including elasticity, morphology, growth, and motility [9,10].

In the present study, cellular elasticity of various cancer cells under the same conditions was measured to eliminate any measurement errors. Three different cell types including breast, cervix, and lung cancers, were selected. One counterpart normal cell and three cancer cells were obtained from each type. Among the cancer cells, two were non-metastatic cells and one was a metastatic cell. Cellular elasticity measurements were performed using AFM in liquid conditions. Differences in the content and distribution of F-actin, a main structural protein in the cell cytoskeleton, were examined, and the results compared with cellular elasticity.

The AFM system Nano N8 NEOS AFM (BRUKER®, Hamburg, Germany) was used for imaging and force-distance (FD) curve measurement in liquid conditions. The AFM probe (Cont GD, Budget Sensors Inc., Sofia, Bulgaria) consisted of an Au-coated cantilever and a Si-based conical tip was used to measure the FD curve. Detailed dimensions of the probe were as follows: resonance frequency, 13 kHz (± 4 kHz); force constant, 0.2 N/m (0.07-0.4 N/m); cantilever length, 450 µm (± 10 µm); cantilever width, 50 µm (± 5 µm); cantilever thickness, 2 µm (± 1 µm); tip height, 17 µm (± 2 µm); tip radius < 10 nm. Half cone angle of the conical tip along the cantilever-axis ranged from 20-22.5°. Load force was set at ≤ 10 nN to minimize damage to the cell membrane, and the loading rate of the probe was approximately 1 µm/s. FD curve measurement was performed at 10 points per cell for 20 cells of each cell type. The cellular elasticity was measured around the cell nucleus to avoid matrix effects. For FD curve measurement, cells were immobilized with 3.7% formaldehyde solution for 15 min.

All cancer cells were treated with 3.7% formaldehyde solution for 15 min to fix the cell structure. Cells were then washed with phosphate buffer saline (PBS) solution for 30 s. Rhodamine-phalloidin (100 nM, Alexa Fluor 488 phalloidin, Invitrogen Inc., Carlsbad, CA, USA) was used to react stoichiometrically with F-actin for visualizing distribution of actin filaments. Reagent-treated cells were incubated for 30 min at room temperature and in dark conditions. Cells were rewashed several times with PBS and stored in dark conditions at 4 °C. Fluorescence optical microscope (NIKON Ti-E, Nikon instruments Inc., Tokyo, Japan) was operated using an excitation wavelength of approximately 495 nm and an emission wavelength of approximately 518 nm. Immediately prior to fluorescence measurement, 4',6-diamidino-2-phenylindole, dihydrochloride (DAPI) solution was used to stain nuclei. DAPI has absorption and emission maxima at wavelengths of 358 nm (ultraviolet) and 461 nm (blue), respectively.

Cells were washed several times with PBS and scraped into RIPA buffer containing a protease inhibitor cocktail. To separate cell debris and actin proteins, cells were centrifuged at 374 ×G for 5 min (4 °C). Then, the supernatant was continuously centrifuged at 15,000 ×G for 5 min (4 °C). The pellet that formed on the bottom contained F-actin and the supernatant contained G-actin. For western blot analysis, F-actin was treated with depolymerization buffer solution to transfer G-actin. Then, 10 mg of G- or F-actin proteins were loaded onto 12.5% polyacrylamide gels; the resolved proteins were transferred to nitrocellulose membranes. The membranes were blocked with 5% fat-free milk in PBS (pH 7.4) for 30 min at room temperature and then incubated with anti-actin (Cytoskeleton Inc., Denver, CO, USA) at the appropriate dilutions overnight at 4 °C. Membranes were incubated with anti-rabbit secondary antibodies (GenDEPOT Inc., Katy, CO, USA) for 1 h at room temperature and then subjected to enhanced chemiluminescence (Pierce Biotechnology, Waltham, MA, USA) and autoradiography using the ChemiDoc XRS+ Imaging System (BioRad, Hercules, CA, USA).

Morphological characteristics of cancer cells based on cancer type

Optical images both normal cell and three kinds of different cancer cells within different types of tumour such as breast, cervix, and lung. 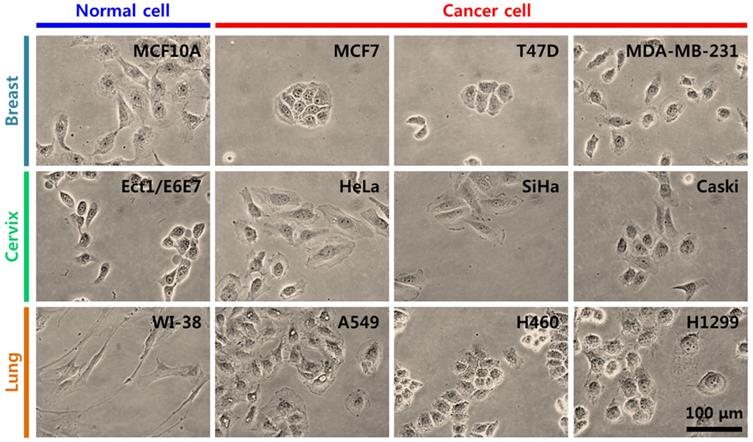 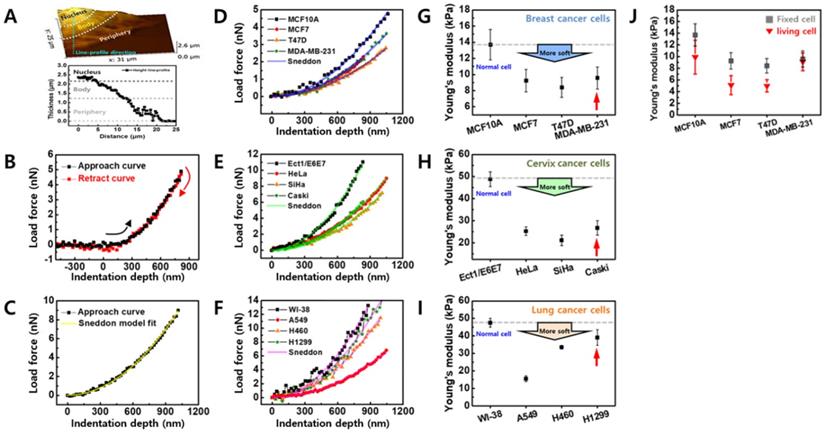 The cellular elasticity was determined based on FD curve measurement using AFM. After imaging a cell surface with a scan 20 × 20 μm2 in size, the actual contact point for the FD curve was selected for the cell body (Figure 2A). Although cell thickness (the difference in height between the cell nucleus and the substrate) varies by cell, the range is approximately 2.5 µm, and becomes thinner as it nears the periphery. The cell thickness at the periphery is approximately 1 µm. Based on this data, the FD curve was obtained for the cell body around the nucleus due to the following two reasons. First, the cytoskeletal proteins that contribute to cellular elasticity are abundant around the nucleus. Second, if the cell membrane is very thin (< 2 µm); the FD curve reflects the influence of the substrate.

where F and δ are measured values indicating load force and indentation depth, respectively, α is a half cone angle along the cantilever axis, and ν is Poisson's ratio. The α and ν values were fixed at 22.5° and 0.5, respectively. E is Young's modulus, a physical quantity of sample elasticity. FD curve fitting based on the Sneddon model was interpreted as having a high fitting ratio close to R2 > 0.99 for all cells, as shown in Figure 2C. A high Young's modulus value indicates high elasticity and a low value indicates low elasticity.

Quantitative analysis of actin protein was performed to examine cytoskeletal differences in cancer cells. Actin protein is an essential component of the cytoskeleton and plays a major role in cellular elasticity [21]. The actin protein has two forms, a globular monomer (G-actin) and a filamentous polymer (F-actin). F-actin is formed by polymerization from G-actin and is closely related to the elasticity of living cells. Since the total amount of G- and F-actin is maintained through the polymerizing process, the relative amount of F-actin was compared in cancer and normal cells.

Since cellular elasticity is also affected by cytoskeletal structure, the distribution of F-actin in cytoplasm was investigated using immunofluorescence images stained with rhodamine conjugated to phalloidin. Figure 4A shows fluorescence images of the F-actin in cells from breast (upper panel), cervical (middle panel), and lung (lower panel) cells. Distinct differences in F-actin distribution were observed between normal and cancer cells. In cells from breast, F-actin was evenly distributed in the normal cells (MCF10A) throughout the cytoplasm, however, F-actin was biased towards the periphery in cancer cells (MCF7, T47D, and MDA-MB-231). Different F-actin distribution in normal and cancer cells was more apparent in cells from cervix and lung. Unlike the uniform distribution of the normal cells, F-actin in the cancer cells was mainly distributed on the periphery. The density of F-actin was analyzed based on quantification of fluorescence intensity using Gwyddion software (Figure 4B). Fluorescence intensity was measured across the lines shown in the corresponding image in Figure 4A (S3 Figure). Significant difference was not observed in the intensity of F-actin across the cytoplasm in the three normal cell lines. However, the intensity of F-actin was significantly high at both peripheral regions in all cancer cells. The intensity of F-actin at the peripheral regions was more than twice the actin levels in other regions. 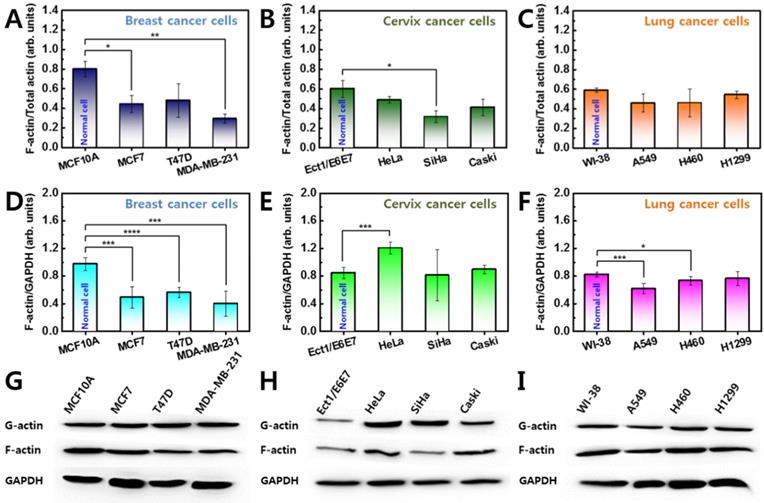 (A) Cells were stained with rhodamine-conjugated phalloidin to detect F-actin (green). (B) Quantification of fluorescence intensity of F-actin using Gwyddion software. Intensity profiles were determined from white line shown in (A). Red triangles indicate start and end points of line profiles. 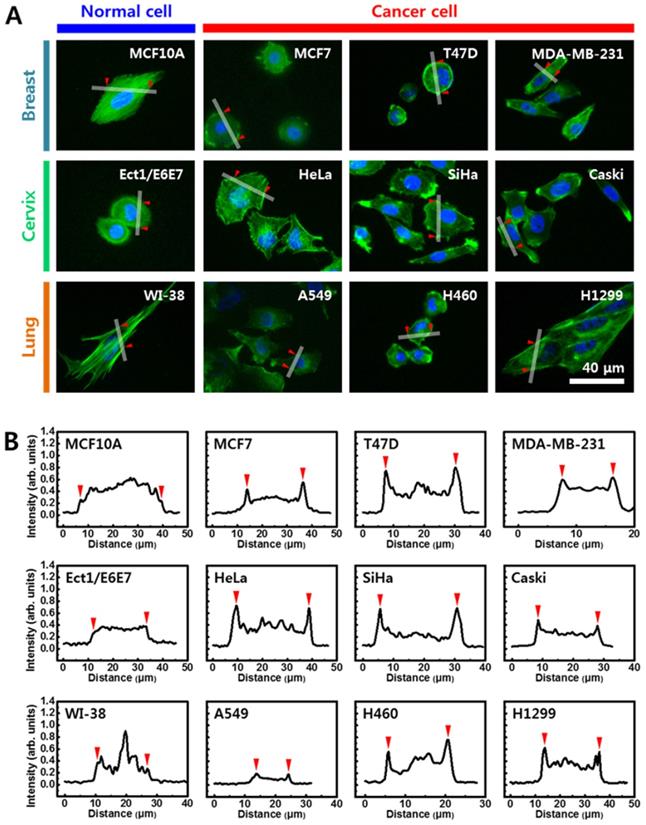 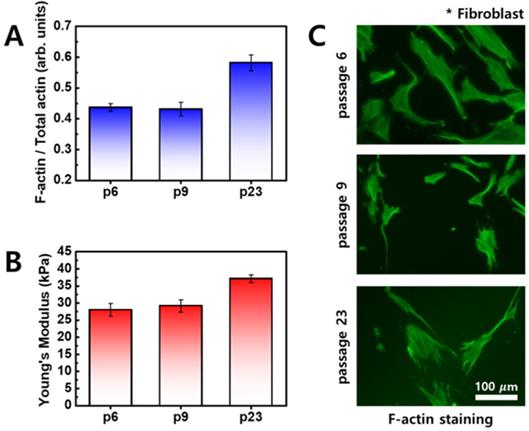 In summary, although the elastic properties of cancer cells, which are distinguishable from normal cells, have been intensively studied, practical applications such as cancer diagnosis and treatment are limited. This is because the elasticity shows a very different value depending on the cell type as well as cell culture and measurement conditions, thus, quantitative analysis is limited. In the present study, more accurate analysis and comparison of cancer cell elasticity was possible by measuring the elasticity in three different groups having different histological origin under strictly controlled identical conditions. The elasticity of cancer cells was less compared with normal cells; however, the reduction in elasticity depended on the histological origin of the cancer cells. The change in cancer cell elasticity showed a close association with the change in actin content in all groups. In addition, the F-actin in the cancer cells was mainly distributed at the periphery of the membrane unlike normal cells. Further studies are needed to determine whether the unique distribution of F-actin in cancer cells is due to lower levels in actin content or associated with the mobility of cancer cells.

This work was supported by the National Research Foundation of Korea (NRF) grant funded by the Korea government (MSIT) (No. 2020R1F1A1057505).