Association between Socioeconomic Status and One-Month Mortality after Surgery in 20 Primary Solid Tumors: a Pan-Cancer Analysis

Background: Surgery is the main therapy for primary solid tumors. One-month postoperative mortality remains an important criterion for assessing the quality of surgery. Socioeconomic status (SES) plays an important role in the biopsychosocial medical model. We performed a pan-cancer analysis to explore the relationship between SES and one-month mortality after surgery in 20 primary solid tumors.

Methods: Eight SES factors and the top 20 common cancer sites were selected between 2007 and 2014 based on the Surveillance, Epidemiology, and End Results database. The primary outcome was that patients died within one month after surgery. The control group survived beyond one month. Multivariable logistic regression model, propensity score matching and subgroup analysis were used to detect the association.

Conclusions: There was a strong association between SES status and one-month postoperative mortality in primary solid tumors. Socioeconomically disadvantaged people had high risks of dying within one month after surgery. Unmarried or Medicaid/uninsured status were associated with much higher risks than other factors.

Cancer has been one of the greatest enemies of humanity. It was estimated that there were 18.1 million new cancer cases and 9.6 million cancer deaths worldwide in 2018 [1]. Cancer is commonly classified into two broad types, solid tumor cancers and hematological cancers, and solid tumors make up most of cancers. Cancer-directed surgery is the main therapy for solid tumors, and it is almost the only solution to cure solid tumors. Although patients chose cancer-directed surgery for life extension, 0.5% of patients developed at least one postoperative complication and died in a few of weeks after elective surgery [2]. The situation was more severe in patients receiving emergency abdominal surgery, of which the overall mortality rate increased to 5.4% by 30 days [3]. One-month postoperative mortality represents that patients' die within one month since surgery. One-month mortality after surgery remains an important criterion when evaluating the quality of surgical treatment [4]. It is also an important indicator of short-term survival after surgery.

Compared to the traditional biomedical model, the biopsychosocial medical model emphasizes the important role of socioeconomic status (SES) in health care services, such as insurance status, marital status and poverty level [5, 6]. Disparities in SES have caused concern in health care system, and socioeconomic factors have been proven to affect prognosis in different cancers [7]. Socioeconomically disadvantaged people tend to have worse survival outcomes when compared to socioeconomically advantaged people [8, 9]. However, few studies focus on the association between SES and one-month postoperative mortality in primary solid tumors.

In this study, we made use of the Surveillance, Epidemiology, and End Results (SEER) database from the United States, and performed a pan-cancer analysis to explore the relationship between socioeconomic factors and one-month mortality after cancer-directed surgery in 20 primary solid tumors. The objective of this study was to assess whether SES influenced one-month postoperative mortality of solid tumors in a retrospective SEER population-based cohort.

The SEER database composes of 18 cancer registries and covers approximately 30% of the population in the United State [10]. We retrieved patient data through the SEERStat software (version 8.3.5, released on March 6, 2018, Authorization number: 12738-Nov.2016). The data in the SEER database were de-identified, and approval for this study was waived by the local ethics committee. All the data are available in the SEER database.

All continuous variables followed a normal distribution, thus continuous variables were described as mean and standard deviation. Categorical variables were described as frequencies and percentages. The primary outcome was that patients died within one month after surgery. The control group survived beyond one month after surgery [11]. Pearson's chi-squared test was used to detect statistical significance between categorical variables and categorical variables. We used the multivariable logistic regression model to detect associations between SES and one-month mortality. The model was adjusted for age at diagnosis, gender and SEER stage. The greater the odds ratio value, the greater the possibility of dying within one month after surgery. Subgroup analysis by cancer site, gender, age group and SEER stage was also performed. Due to disequilibrium between groups, we performed propensity score matching (PSM) with a ratio of 1:1 by R packages of MatchIt. All statistical analysis was done by R software (version 3.6.2, released on February 29, 2020). Two-sided P values < 0.05 was considered significant.

The proportion of patients dying within one month after surgery by socioeconomic factors. Abbreviations: NHW, non-Hispanic white. 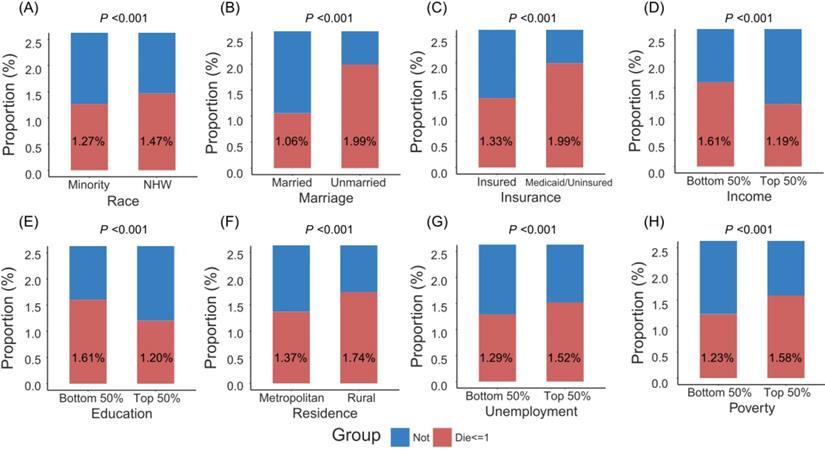 Impact of different socioeconomic factors on one-month mortality after surgery by cancer sites. Note: The aORs were adjusted by age (per one year), gender (male or female), SEER stage (localized, regional or distant), except for brain and larynx by age and gender, for prostate by age, for cervix, ovary, testis and uterine by age and SEER stage; Box indicated aOR; Segment indicated 95% confidence interval; aOR smaller than 1 indicated benefit, and aOR larger than 1 indicated hazard. Abbreviations: NHW, non-Hispanic white; aOR, adjusted odds ratio.

Note: Due to uncommon classification of SEER stage, cancer sites of brain, larynx and prostate were not considered for characteristic of SEER stage. All variables were expressed as frequency (percent), except for age as mean ± standard deviation;

Note: The ORs were adjusted by age (per one year), gender (male or female), SEER stage (localized, regional or distant); The greater the OR value, the greater the possibility of dying within one month after surgery; Due to missing data or uncommon classification of SEER stage, cancer sites of brain, larynx and prostate weren't included in the multivariable logistic analysis;

Marital status and insurance status played a remarkable role in one-month postoperative mortality, whether in overall analysis or subgroup analysis. Plenty of studies have proved the influence of these two factors on long-term prognosis of cancers [12]. Unmarried patients, especially widowed patients, were significantly associated with higher risks of death compared with married patients. Unmarried patients usually had a high incidence of depression, as well as less social supports from spouses and family, and suffered mental stress during the perioperative period [13]. When compared with Medicaid or uninsured patients, insured patients tended to have early cancer stage at diagnosis, and were more likely to undergo treatment, thus with better prognosis [14]. Uninsured patients often failed to pay high medical bills, losing the opportunity for timely screening and treatment [15]. We used a popular method of PSM to create a balanced covariate distribution between two groups, and the effect of marriage and insurance remained.

Our study was a comprehensive update of a prior study [11], which identified determinants of one-month mortality after surgery. Besides married and insured status, we also found that low-income, low-education and high-poverty patients with primary solid tumors were more likely to die within one month after surgery in the multivariable analysis. It is important to note that, after balance of PSM, the effect of education and poverty became insignificant. Cancer site subgroup analysis demonstrated that the high risk of low education was mainly attributed to the brain cancer subgroup , while the high risk of high poverty was mainly attributed to the lung cancer subgroup. Mahal's research identified non-white as a high-risk factor for death within one month after surgery [11], but this effect disappeared in our study, and non-white even became a protective factor after PSM. Subgroup analysis showed that the protective effect of minority came from patients aged more than 69 years old and with SEER distant stage. Our results suggested that the impacts of socioeconomic factors on one-month postoperative mortality varied by subgroup.

The influence of psychosocial factors on diagnosis, treatment and prognosis in cancer patients has caused widespread concern [16, 17]. In this study, we concentrated on SES, and found that there was a strong association between SES and short-term surgical outcomes after surgery. Especially in patients with unmarried or Medicaid/uninsured status, the odds of one-month mortality were much higher than other factors. The potential mechanism might lie in that, patients with socioeconomic advantages are more likely to obtain sufficient family support and great financial security. These patients are always accompanied by adequate financial circumstances and optimal plans from medical experts. Improving SES could reduce one-month postoperative mortality. According to the biopsychosocial medical model, medical care providers should strengthen mental support for unmarried patients besides providing medical care [6, 18]. It's the government's responsibility to expand wider insurance coverage for uninsured patients. If we improve the SES for the disadvantaged ones with solid tumors, their short-term survival after surgery will improve.

The results of our study, which found that socioeconomically disadvantaged people with primary solid tumors were at a high risk of death within one month after surgery, were in line with the prior study [11]. However, compared to the prior study, our study involved a larger sample size and a longer period with up-to-date information from 2007 to 2014. Moreover, our current study, taking eight socioeconomic factors and 20 solid tumors into account, was more broadly considered than the prior one. For clinical features of included patients, Mahal's study chose AJCC tumor stage, which described the size of the primary tumor and any spread of the primary tumor into adjacent tissue [19]. We used clinical SEER stage provided by the database to better represent the whole extent of spread of cancer generally.

Several limitations should be addressed in the current study. Firstly, some other influencing factors, such as concomitant diseases, postoperative complications or eating habits, might affect one-month mortalities of patients with primary solid tumors. These influencing factors should be taken into account for further studies. However, it's a pity that the current SEER database does not provide data about these factors [2, 20]. Secondly, the method we calculated one-month mortality remained to be discussed. The follow-up time provided by the SEER database was recorded in months instead of in days. It might cause calculation problems. For example, if a patient was diagnosed at the beginning of one month and died after surgery at the end of the following month, the follow-up time would be recorded as one month in the SEER database. However, the patient died the second month after surgery actually. In any case, the one-month mortality defined in our study still represented the postoperative short-term prognosis. Thirdly, when it came to some socioeconomic factors, containing household income, education level, residence, unemployment and poverty, the SES information was not at patient-level, but at regional level. We just simply divided them into the top and bottom 50% according to the median. In this regard, the impact of patient-level personal data on primary outcomes may be more meaningful. Fourthly, given that it was a retrospective cohort study, our analysis could only reveal correlations between SES and one-month postoperative mortality. So it is worth exploring whether there is an underlying causality relationship. More studies are necessary to confirm the result.

In conclusion, there was a strong relationship between SES and one-month postoperative mortality in primary solid tumors. Socioeconomically disadvantaged people tended to have high risks of one-month mortality after surgery. Especially in patients with unmarried or Medicaid/uninsured status, the risks were much higher than other factors. It needs to be further evaluated in more clinical trials.

The authors thanked SEER program staff for providing open access to the database.

Presented at: This study was previously presented as a Poster Discussion in the European Society for Medical Oncology Congress 2019 (1643PD, ESMO Congress 2019).

20. Pal SK, Hurria A. Impact of age, sex, and comorbidity on cancer therapy and disease progression. Journal of clinical oncology: official journal of the American Society of Clinical Oncology. 2010;28:4086-93