Purpose: Epidermal growth factor receptor (EGFR) mutation is the most common target for precision treatment in metastatic lung adenocarcinoma. We investigated the predictive role of 18F-FDG PET/CT and clinicopathological features for EGFR mutations in lung adenocarcinoma with bone metastasis.

Conclusion: Low bmSUVmax is more frequently in EGFR mutations, and bmSUVmax is an independent predictor of EGFR mutations. Combining bmSUVmax with other clinicopathological features could forecast the EGFR status in lung adenocarcinoma with unavailable EGFR gene testing.

Precision medicine has become a prevailing approach in the treatment of malignant tumors [1]. A typical representative is the EGFR mutations [2], which is the most common druggable target in non-small cell lung cancer (NSCLC) [3]. In metastatic NSCLC with EGFR mutations, tyrosine kinase inhibitors (TKI) have been established in front-line treatment status [4]. Now the molecular profiling of EGFR status in advanced NSCLC is a recommended standard [5, 6]. However, in clinical practice, a successful gene analysis depends on sufficient tumor samples of good quality, which can be sometimes difficult to obtain [7, 8]. Even in some clinical trials, effective detection rate of EGFR was no more than 40% [4, 9]. Furthermore, in a real-world study, the proportions of patients receiving TKI therapy among those with unknown EGFR mutation status could be as high as 45.8% [10]. Seeking some other predictors of EGFR status may offer assistance.

18F-FDG PET/CT is a noninvasive diagnostic and staging tool for NSCLC [11]. FDG uptake was associated with tumor invasiveness [12], meanwhile EGFR signaling regulated cell proliferation and glucose metabolic pathway in NSCLC with EGFR mutations [13]. Using FDG tumor uptake as a predictor of EGFR status could be worth exploring. Several studies have investigated the association between SUVmax and EGFR mutations [8, 14-25]. However, the results were controversial and conflicting. Previous studies included NSCLC patients with I-IV stages and various histological subtypes, which increased diversity. Furthermore, most studies focused on the SUVmax of primary lung tumor, only few of them [8, 14] discussed the relationship between metastatic FDG uptake and EGFR status. EGFR status in NSCLC may vary according to the tumor staging or histological subtypes, and heterogeneity could exist between primary and metastatic site, making results from above researches inconclusive. Therefore, in this retrospective study, we aimed to evaluate whether 18F-FDG PET/CT and common clinicopathological features could predict EGFR status in advanced lung adenocarcinoma with histologically confirmed bone metastasis.

This retrospective study included lung adenocarcinoma patients with histologically confirmed bone metastasis from November 2016 to November 2019. The study was approved by the ethics committee of our hospital and formal consent was waived. An initial 80 patients were included according to inclusion criteria: PET/CT scan indicated suspicious bone metastasis; bone biopsy confirmed metastasis from lung adenocarcinoma; available results for EGFR mutation status. Then 5 patients were excluded due to exclusion criteria: treatment before PET/CT within 6 months (2 patients); interval between PET/CT and bone biopsy exceeded 1 month (3 patients). Finally, 75 patients were included.

PET/CT was performed using an integrated PET/CT system (Discovery VCT; GE Medical Systems). All patients were required to fast for at least 6h and undergo a peripheral blood sugar test to avoid hyperglycemia. Approximately 1 h after the intravenous injection of 18F-FDG (3.7MBq/kg), CT was done from head to lower limbs with the following setting: 120 V and 80 mA, 64 slices, with a slice thickness of 3.75 mm. PET scans were performed with 2.5 min per bed position. Finally, the CT and PET images were reconstructed iteratively using ordered subset expectation maximization. Attenuation correction was done by unenhanced CT. A senior nuclear medicine doctor then evaluated all of the combined 18F-FDG PET/CT scans whilst blinded to the EGFR status. The region of interest (ROI) over the primary lung tumor, regional nodal metastasis and bone metastasis were drawn on PET/CT images on each transaxial slice. SUVmax was defined at the peak value on one pixel with the highest counts within the ROI. Representative image is shown in Figure 1.

Bone biopsy was performed in each patient. The specimen was then handled with modified Ethylene Diamine Tetraacetic Acid (EDTA) decalcification (which is good at preserving antigenicity and DNA quality), instead of traditional acid decalcification. If bone metastasis form NSCLC was confirmed by the morphology and immunohistochemistry (IHC) results of specimen, EGFR mutations were analyzed under of the amplification refractory mutation system (ARMS) using the EGFR 29 Mutations Detection Kit (Amoy Diagnostics, Xiamen, PRC).

The characteristics of included patients were compared, using Fisher's exact test for binary data and the Wilcoxon rank-sum test for continuous data. All tests were two-sided and P values less than 0.05 were considered statistically significant. ROC curve was constructed to obtain the cutoff value of bmSUVmax in predicting EGFR mutation status. Logistic regression analysis was performed to identify independent predictors of the EGFR status. Variables with p < 0.05 in the multivariate analysis were independent predictors for EGFR mutations. The ROC curves were constructed for individual predictor and combined factors in predicting EGFR mutations. Statistical analyses were performed using STATA/SE version 15.1 (StataCorp LLC USA).

Among the final 75 patients, all of them received EGFR status test from bone biopsy. 66 patients received PET/CT as an initial diagnosis. 9 patients had resection of primary site before PET/CT, and then PET/CT was performed as an overall assessment (The interval between resection and PET/CT was not exceed 1.5 months). EGFR mutations were identified in 37 (49.3%). The mutations types were Exon 18 (2, 5.5%), Exon 19 (22, 59.5%), Exon 21 (13, 35%). Further clinical characteristics were summarized in Table 1.

Univariate and multivariate analysis of predictors in EGFR status

Prediction of the EGFR mutation status

EGFR mutations had a decisive role in systematic therapy of NSCLC. In this study, we found that bone metastasis from EGFR mutant lung adenocarcinoma had lower SUVmax than EGFR wild types. However, SUVmax of primary tumors and regional lymph nodes didn't seem significantly different between two EGFR status lung adenocarcinomas. Further analyses demonstrated that lower bmSUVmax was an independent predictor for EGFR mutations. When combining with other accessible factors, an AUC of predicting EGFR mutations could reach 0.84. 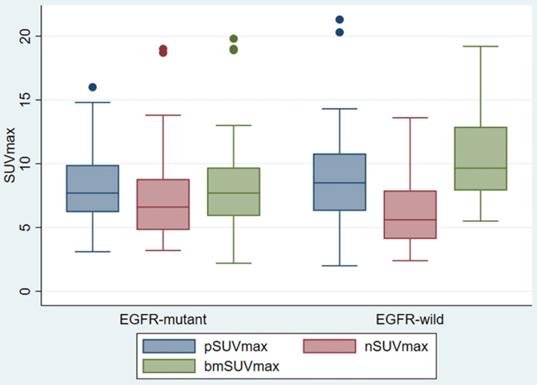 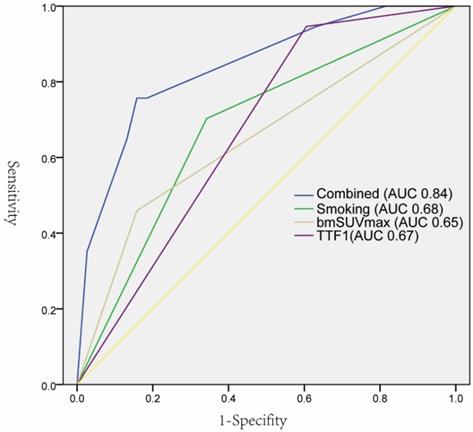 Several studies [8, 12-23] had evaluated the value of FDG uptake for predicting EGFR status in NSCLC. As described in Table 3, the results were not very consistent. Almost all previous studies solely focused on the pSUVmax. Ten of them [8, 14-16, 18-23] revealed that lower pSUVmax was associated with EGFR mutations, and three studies [8, 22, 23] found lower pSUVmax was an independent predictor for EGFR mutations by multivariate analysis. Meanwhile, two studies [15, 19] demonstrated that high pSUVmax was a significant predictor of EGFR mutations, and one [14] didn't show statistical difference in pSUVmax between different EGFR statuses. Possible explanation for these controversies may the clinicopathological features. These studies included NSCLC patients of all stages and various histological types. EGFR status could vary according to the different clinical stage [8], while NSCLC FDG uptake across histologic subtypes may be discrepant [26]. As a result, conflicts existed in the previous related studies.

Our data were consistent with above studies to a great extent, whereby low SUVmax of metastasis could predict EGFR mutations of NSCLC, while SUVmax of primary tumor was less useful. EGFR was responsible for the tumor invasiveness, which is an interesting finding that EGFR mutations were associated with lower SUVmax. FDG uptake in malignant tumors was mediated by Glucose transportase-1 (GLUT-1) [27], Higashi et al. [28] proposed the correlations between GLUT-1 expression and FDG uptake in NSCLC. EGFR, on the other hand, has a strong interaction with sodium/glucose cotransporter 1 (SGLT1) in various tumors [29-31]. As SGLT1 opposed to GLUT-1 [27], this mechanism may partly explaine less FDG avid in EGFR mutations. However, further mechanism studies should be sponsored for investigating the relationship between tumor metabolic activity and EGFR mutations.

In patients with stage IV NSCLC, SUVmax of primary tumor seemed to have no predictive value, a reasonable explanation being heterogeneity in tumor metastasis. Lymph node FDG uptake was also significant in the studies of Lv et al. [8] and Lee et al. [14], nevertheless, our data didn't find significance in different EGFR status. Only 47 patients in the study had regional node involvement, which may affect the statistical analysis. We also considered the confounding factor of inflammatory lymph nodes which is difficult to identify from metastatic nodes.

One novel aspect of our research was the histologic tissue origin. All of the included patients received bone biopsy; subsequent pathological evaluation and EGFR analysis were performed by bone metastasis tissue. Hardness was the distinguishing feature of bone tissue; decalcification should be performed first for histological analyses [32]. Traditional acid decalcification inevitably affected IHC [32] and molecular pathology [33]. In our study, EDTA decalcification was applied, which was more suitable for preserving the bone structure, antigenicity, and DNA quality [32-34]. EGFR mutations were identified in 37 (49.3%), which was consistent with the mutation rate in Asian populations (36.8-76.2%) [35]. To our knowledge, our study was the first using bone metastasis tissue as reference, comparing to the similar others. The molecular analysis from same tissue source could avoid metastatic tumor heterogeneity to a great extent.

In the diagnosis of lung cancer, lung biopsy was the more traditional selection for pathological examination and gene test in the past. However, pneumothorax and air embolism arising from lung biopsy could be potentially life-threatening [36, 37]. By contrast, bone biopsy was proven to be a safe method without serious biopsy-related complications [38-40]. In our clinical practice, biopsy was usually performed by outpatient. Patients left the hospital directly after the biopsy. Consequently, quite a proportion of patients preferred to a safer biopsy method after consideration. As a result, in this study, there existed patients with bone biopsy, rather than lung biopsy.

In the multivariate analysis, we demonstrated another two predictors of EGFR mutations: non-smoking, and positive expression of TTF-1. The predictive value of non-smoking has been proven by previous studies [8, 41]. TTF-1, a routine IHC index of lung cancer, may be a biomarker to predict the unknown EGFR mutation status. In a meta-analysis containing 9764 patients [42], TTF-1 expression significantly correlated with EGFR mutations in patients with NSCLC. When specimens weren't good enough for gene testing, those clinicopathological features may assist to guide targeted therapy.

There were several limitations in our study. First, it was a retrospective study that may introduce selection bias. We included lung adenocarcinoma patients with histologically confirmed bone metastasis, further validation of our results would be performed by other stage IV lung cancer. Moreover, not every patient received ALK and ROS1 rearrangement tests; we couldn't know whether other mutations have an influence on FDG uptake. As clinically impractical, not all bone metastasis lesions were biopsied, we chose the bone lesion with highest bmSUVmax to analyze.

In conclusion, the bone metastasis of EGFR-mutant lung carcinoma has lower FDG uptake compared with EGFR wild-type, and SUVmax could be a valuable noninvasive predictor for EGFR mutations. Combining SUVmax with other clinicopathological features could forecast the EGFR status in lung adenocarcinoma with unavailable EGFR gene testing.