This is an open access article distributed under the terms of the Creative Commons Attribution License (https://creativecommons.org/licenses/by/4.0/). See http://ivyspring.com/terms for full terms and conditions.
Citation:
Bordonaro M. Further analysis of p300 in mediating effects of Butyrate in Colorectal Cancer Cells. J Cancer 2020; 11(20):5861-5866. doi:10.7150/jca.47160. Available from https://www.jcancer.org/v11p5861.htm

The dietary fiber product butyrate, a histone deacetylase inhibitor (HDACi) hyperactivates Wnt signaling and this is causally associated with the induction of apoptosis and the repression of cell proliferation in colorectal cancer (CRC) cells [1,2]. The histone acetylases CBP and p300 bind to beta-catenin in a competitive manner, triggering two different branches of Wnt activity [3]. CBP-Wnt activity is associated with proliferation and p300-Wnt activity is associated with differentiation and apoptosis [3-6]. A pharmacological agent, ICG-001, inhibits CBP-Wnt activity [3] and I have shown cooperative and antagonistic effects of this agent with butyrate upon cotreatment of CRC cell lines [4]. CRC can develop despite a high fiber diet; hence, butyrate resistance may occur during colonic neoplasia. Since it is likely this butyrate resistance contributes to CRC that occurs within the context of a high fiber diet, understanding the mechanisms underlying resistance is important for enhancing the efficacy of fiber/butyrate as a chemopreventive agent against CRC.

I previously demonstrated that HCT-116 CRC cells can be made resistant (i.e., suppressed apoptosis and maintained cell growth) to a physiologically relevant concentration (5 mM) of butyrate through exposure to this agent (butyrate resistant HCT-R cell line); in these cells, resistance is accompanied by repressed Wnt hyperactivation [2]. HCT-R cells are also cross-resistant to clinically relevant HDACis that are structurally unrelated to butyrate [2]; hence, the phenomenon of butyrate resistance has implications not only for chemoprevention via butyrate but also for chemotherapeutic applications utilizing other HDACi agents.

While the findings with HCT-116 cells demonstrated the importance of p300 in that line, they did not definitively demonstrate that it is the association of p300 with beta-catenin, and hence, p300-Wnt signaling, that is specifically mediating butyrate resistance. To evaluate this in the present study, I utilized YH249, a pharmacological inhibitor targeting the p300-Wnt signaling pathway through inhibition of the p300-beta-catenin association [7]. Unexpectedly, YH249 potentiates butyrate-induced effects on apoptosis and cell proliferation. This finding may be due to off-target, p300-independent effects of YH249 on butyrate-induced Wnt hyperactivation observed in HCT-116 cells. The possibility that p300-independent pathways to butyrate resistance exist was then confirmed by the creation of SW620 cells resistant to 5 mM butyrate; these cells do not downregulate p300 expression. Thus, these data suggest that p300-independent pathways influencing butyrate sensitivity exist in addition to the previously demonstrated p300-dependent modulation of butyrate sensitivity. Further, although in my hands YH249 demonstrated unexpected, possibly off-target, effects, it potentiated the ability of butyrate to induce apoptosis and repress cell proliferation and therefore may have potential clinical applications.

Butyrate was obtained from Sigma, dissolved in purified water, filter sterilized, and used at 5 mM concentration. YH249 was synthesized by Reagency (South Yarra, Australia), with DMSO (Sigma) as the vehicle.

Western blotting was performed as previously described [1,2,4-6]; band images were adjusted for brightness and contrast to enhance visualization.

Student's T-test was utilized, with statistical significance set at P < 0.05.

I first ascertained if pharmacological inhibition of the p300-beta-catenin association, and, hence, repression of p300-Wnt activity, induces butyrate resistance in HCT-116 cells similar to that observed with knockout of p300 [6]. Thus, YH249, reported to specifically interfere with the association of p300 with beta-catenin [7] was utilized to repress p300-Wnt signaling activity.

To confirm the reported effects of YH249 on CBP vs.p300 association with beta-catenin [7], I performed coimmunoprecipitation. I utilized 30 µM YH249; this concentration was chosen because preliminary experiments (data not shown) demonstrated that this was the lowest concentration to efficiently repress butyrate-induced Wnt hyperactivation. My findings are consistent with that previously observed [7]; p300-beta-catenin binding was suppressed while CBP-beta-catenin binding was increased (Fig. 1A top). This increase is consistent with findings [3,7] that show that when the binding of CBP or p300 to beta-catenin is inhibited, the binding of the other is increased since they compete for the same binding site on beta-catenin. I also utilized a survivin promoter luciferase reporter to assess the specificity of YH249; survivin is a CBP-Wnt target gene not upregulated by p300 [3,7]. As expected, YH249 does not repress survivin promoter activity (Fig. 1A bottom), consistent with a lack of effect of YH249 on CBP-Wnt activity.

Basal and butyrate-induced Wnt activity in HCT-116 cells are repressed by YH249 (Fig. 1B). There is a one-third decrease in basal Wnt activity (P < 0.03), consistent with findings suggesting that p300-Wnt activity is a minor fraction of the total Wnt activity in these cells [4,5]; further, YH249 decreased the fold-upregulation of Wnt activity by butyrate from 32.8-fold to 16.3-fold (P < 0.05). Since downregulation of p300 promotes butyrate resistance [4-6], I hypothesized that YH249 treatment would repress effects of butyrate on apoptosis and cell proliferation by inhibiting p300-mediated Wnt signaling. However, YH249 potentiated the effects of butyrate on both the induction of apoptosis (P < 0.001) (Fig. 1C) and repression of cell proliferation (P < 0.001) (Fig. 1D).

Since these latter findings were unexpected, I evaluated possible off-target effects of YH249 [7] in F5 p300 knockout HCT-116 cells [6 and refs. therein]. Since these cells do not express p300, one would not expect effects of YH249 in these cells if the agent was acting solely through the p300-Wnt pathway. As expected, there was no change in basal Wnt activity (Fig. 2), unlike what was observed for HCT-116 cells (Fig. 1B). This suggests that while YH249 targets p300-Wnt activity in HCT-116 cells that express p300, it does not affect CBP-Wnt activity in F5 cells that lack p300. However, Wnt hyperactivation in YH249-treated F5 cells is inhibited (13.3-fold to 4.1-fold, P < 0.001), demonstrating that YH249 affects butyrate-induced Wnt hyperactivation independent of p300. 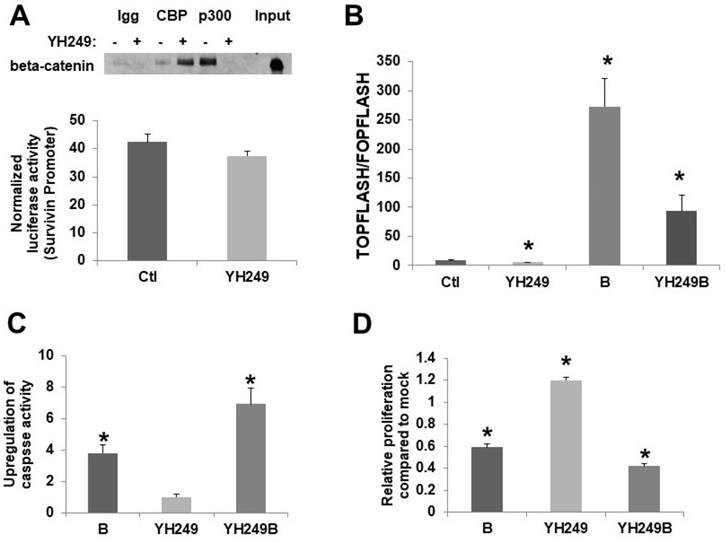 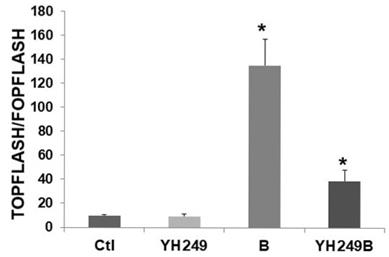 While I had previously generated SW620 cells resistant to 3 mM butyrate [8], for the first time I present SW620 cells resistant to 5 mM butyrate, a level equivalent to the previously reported HCT-R line [2], which I have shown is deficient in p300 expression [5]. Thus, SW620 cells were made resistant to exposure to a physiologically relevant concentration of butyrate (5 mM) by constant exposure to increasing concentrations of this agent. Butyrate resistant SW620 cells (620R) cells express p300 (Fig. 3A), unlike HCT-R cells [5]. I compared SW620 and 620R cells with respect to Wnt activity, apoptosis, and proliferation. Thus, I measured Wnt activity, apoptosis, and proliferation, in the presence or absence of 5 mM butyrate. 620R cells exhibit repressed Wnt hyperactivation (Fig. 3B) when exposed to 5 mM butyrate. This difference in fold-induction between the cell lines was statistically significant (P < 0.03), as was the difference between the overall levels of Wnt activity measured in the presence of butyrate (P < 0.001). These findings indicate that the hyperactivation of Wnt signaling by butyrate is sharply repressed in the butyrate-resistant 620R cell line. SW620 cells were very sensitive to the effects of butyrate on upregulating apoptosis (Fig. 3C); thus a 12-fold induction was observed (P < 0.001). In contrast, for 620R cells, only a 3.3-fold induction was observed (P < 0.01); this difference in fold-induction between the two cell lines was highly significant (P < 0.001). Treatment with butyrate reduced SW620 cell proliferation by 25% after 24 hr (P < 0.005), while for 620R cells, proliferation was unchanged (Fig. 3D); this difference was statistically significant (P < 0.05). 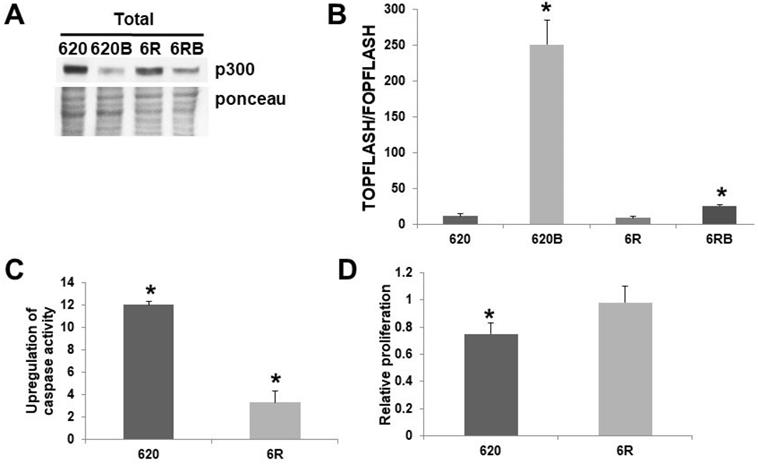 The data presented here (Figs. 1 and 2) suggest that YH249 does not have off-target effects on basal Wnt activity, but does have p300-independent, possibly off-target, effects on butyrate-induced Wnt activity. Regardless, YH249 cooperates with butyrate to induce CRC cell apoptosis and repress proliferation; thus, derivatives of this agent may have future clinical utility, similar to the CBP-Wnt inhibitor ICG-001 [3]. Given that YH249 alone resulted in a small increase in CRC cell proliferation (Fig. 1D), possibly due to as of yet unknown off-target effects, possible use of YH249 as a therapeutic agent should be restricted to the context of a high fiber diet (i.e., butyrate) and/or cotreatment with clinically relevant HDACis.

The mechanisms whereby YH249 exerts these p300-independent effects remain to be determined. The induction of butyrate resistance observed with abrogation of p300 expression and reversed by p300 re-expression [6] is not observed with YH249 (which in fact potentiates the effects of butyrate). This suggests that either downregulation of p300 expression has effects on CRC cell physiology independent of p300-Wnt signaling or that, in my hands, the off-target, p300-independent effects of YH249 influence CRC cell physiology to a greater extent than the p300-Wnt-targeted effects of this agent.

These findings suggest that while p300 activity may be important for the development of butyrate resistance in (at least some) CRC cell lines, it is not absolutely required, and that p300-independent mechanisms also play a role (Fig. 4). Included in these p300-dependent mechanisms maybe over-expression of Tcf3 and various cell cycle factors [9]. Given that overexpression of p300 has been associated with improved prognosis for disease-free survival of CRC patients [10], understanding the role of p300 in CRC development, prevention, and treatment will be clinically important.

Possible roles of p300 in CRC cell lines. (A) In HCT-116 cells that exhibit p300-beta-catenin association, we posit that butyrate affects both p300- and CBP-Wnt activities, influencing cell growth arrest and apoptosis (in conjunction with Tcf3 and other factors). YH249 also affects these outcomes, possibly through off-target effects as well as through inhibition of p30-Wnt signaling. Butyrate resistant HCT-116 cells exhibit abrogation of p300 expression that likely influences butyrate resistance, since p300 knockout (KO) cells exhibit butyrate resistance. (B) SW620 cells differ from HCT-116 cells in that the SW620 line exhibits no observable p300-beta-catenin association. Thus, we posit that in these cells, p300-activity is not involved in the effects of butyrate, reflected in that p300 expression is still observed in butyrate resistant SW620 cells.

This short research communication is a preliminary study and thus has several limitations. Future work should evaluate how YH249 affects CBP and p300 binding to beta-catenin, as well as histone acetylation, in CRC cells exposed to butyrate. It will also be necessary to utilize ICG-001 and/or CBP knockdown to further ascertain the possible role of CBP-Wnt activity in the off-target effects of YH249, although the survivin reporter data (Fig. 1A) makes CBP involvement unlikely. Further, only two cell lines were utilized in the present study. A wider range of CRC lines, and their butyrate resistant counterparts (that need to be generated), should be evaluated before in vivo murine studies, which are necessary before clinical implications can be considered, can be conducted.

MB is supported by funding of Geisinger Commonwealth School of Medicine.