Background: The most common metastatic site in cervical cancers is lung. The aim of this study is to identify cervical cancer patients with high risk for developing lung metastasis and further explore their prognosis.

Materials and Methods: At first, patients diagnosed with cervical cancer from 2010 to 2015 were identified from The Surveillance, Epidemiology, and End Results (SEER) database. Multivariate logistic and Cox regression models were used to identify risk and prognostic factors in cervical cancer patients with lung metastasis. Besides, the clinical characteristics of 14 cervical cancer patients followed up for five years with only lung metastases treated at the First Affiliated Hospital of Wenzhou Medical University were retrospectively analyzed.

Results: 19,377 cervical cancer patients were selected from the SEER database; the incidence of lung metastases is 4.33%. Multivariable analysis indicated that advantage age (p<0.001), non-squamous type (p<0.001), late stage (p<0.001), lymph nodes metastases (p<0.001), and poor differentiation (p<0.003) were associated with increased risks for developing lung metastasis. Survival analysis showed that adenocarcinoma, as well as bone and liver metastases were associated with shorter survival in multivariate Cox regression. Among 14 cervical cancer patients with only lung metastasis treated in our hospital, seven patients died within median follow-up time of 16.5 months, including six patients with multiple lung metastasis lesions and one patient with solitary lesion. Seven patients received pulmonary metastasectomy and the following cisplatin-based chemotherapy, among whom one patient died during follow up.

Carcinoma of the uterine cervix remains a leading cause of cancer-related mortality in women, causing 311,365 deaths in 2018 worldwide [1]. Despite early-stage or locally advanced cervical cancer patients that have a good prognosis because of appropriate therapy, metastatic cervical cancer remains lethal with a median survival of 8-13 months, with no standard treatment [2, 3].

Public original data were obtained from the SEER database. Data were downloaded by SEER*Stat Software version 8.3.5 (https://seer.cancer.gov/data/) (National Cancer Institute, Bethesda, MD, USA). The inclusion criteria included primary site code ICD-O-3 (International Classification of Diseases for Oncology-3)/WHO 2008 restricted to 'cervix uteri', and the diagnosis was made from January 1, 2010 to December 31, 2015. The exclusion criteria were listed as follows: (1) patients diagnosed at autopsy or via death certificates; (2) the age at diagnosis younger than 18 years; (3) unknown lung metastases; (4) in-situ, benign or borderline tumors. Besides, patients who had unclear TNM stage record, unknown survival time, missing cause of death, or unknown diagnostic confirmation were subsequently excluded (Figure 1).

Flowchart of the patient's enrollment in this study according to the inclusion and exclusion criteria. 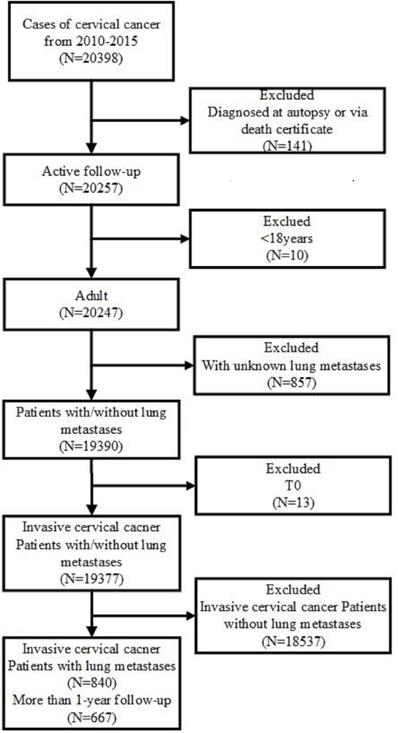 Patient data from our hospital

This study complied with the Declaration of Helsinki and followed the ethical principles of the First Affiliated Hospital of Wenzhou Medical University. Patients had signed written informed consents to be included in the study. Clinical and pathologic information were obtained from patient files and pathology reports.

The median age of all patients is 46.5 (range from 37 to 63). Four cases are in Stage I, and ten in Stage II according to 2009 FIGO staging criteria. Ten patients are diagnosed squamous cell cancer, three adenocarcinoma and one clear cell cancer. 90.9% of the patients have deep stromal invasion. Four cases have pelvic lymph node metastasis.

Clinical characteristics of patients with only lung metastasis in our center

Seven deaths were occurred among these 14 patients with a median follow-up time of 16.5 months (from pulmonary metastasis to death or last follow-up). In those patients died during our study, six patients have multiple lung metastasis lesions and only one patient has solitary lung metastasis lesion. Patients with solitary lesion had longer medium interval between lung metastasis and death or last follow-up (33.29 months vs 16.43 months, p<0.05). When it comes to the regimen, among the seven patients received pulmonary metastasectomy and the following cisplatin-based chemotherapy, only one patient died because of the disease. Five patients took cisplatin-based chemotherapy, one patient underwent chemoradiotherapy and one patient rejected any treatment.

Sur(prim) = surgical treatments of primary site, NA = Not available, all factors with Unknown data were removed from Cox and Kaplan-Meier model.

Since cervical cancer with lung metastases are usually asymptomatic and present poor prognosis, there is a crying need to identify patients with high-risk for lung metastasis. In this study, we found that patients with age greater than 65, non-squamous histology type, late stage, pelvic lymph nodes metastases, poor differentiation, other organ metastasis and without operation at the first treatment were more likely to suffer lung metastasis. It is not surprising that patients with advanced disease, non-squamous type, and lymphatic metastasis are more likely to suffer lung metastasis, since these factors have been well described as poor prognostic predictors for cervical cancer [13, 14]. Ageing has been recognized as the biggest risk factor for cancer because of the accumulation of mutations and compromised immune system [15]. Cervical cancer is no exception. The incidence of cervical cancer among all women with an intact cervix continues to increase through at least age 69 years [16, 17]. It is reported that elder women with cervical cancer had a poor overall survival without the influence of stages and histologic subtypes [18, 19]. We found in our study that the odds risk was increasing with age, which further support the opinion that age is an independent negative prognostic factor for cervical cancer. Poor differentiated tumor cells are usually more aggressive, which might partially explain our results that poor differentiation was significantly linked to higher risk of lung metastasis [20].

The Venn diagram of risk and prognosis factors of cervical cancer lung metastasis. All the factors included in the left circle represent the risk factors for developing lung metastasis. The factors included in the right circle were associated with mortality. Bone and liver metastasis are both the risk and prognosis factors for lung metastasis in cervical cancer patients. *The median cancer specific survival time was prolonged from 15.95 (95% CI: 14.00-17.90) months to 30.70 (95% CI: 21.24-40.15) months in patients with surgery of primary site. 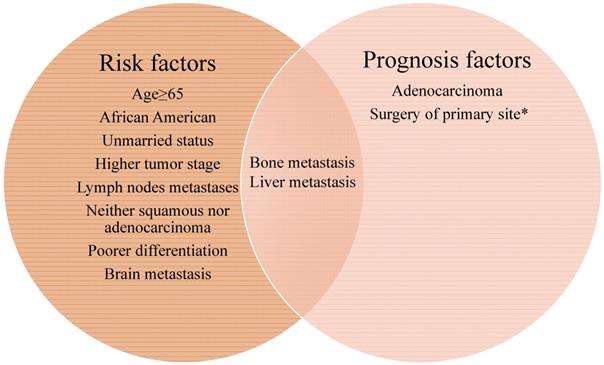 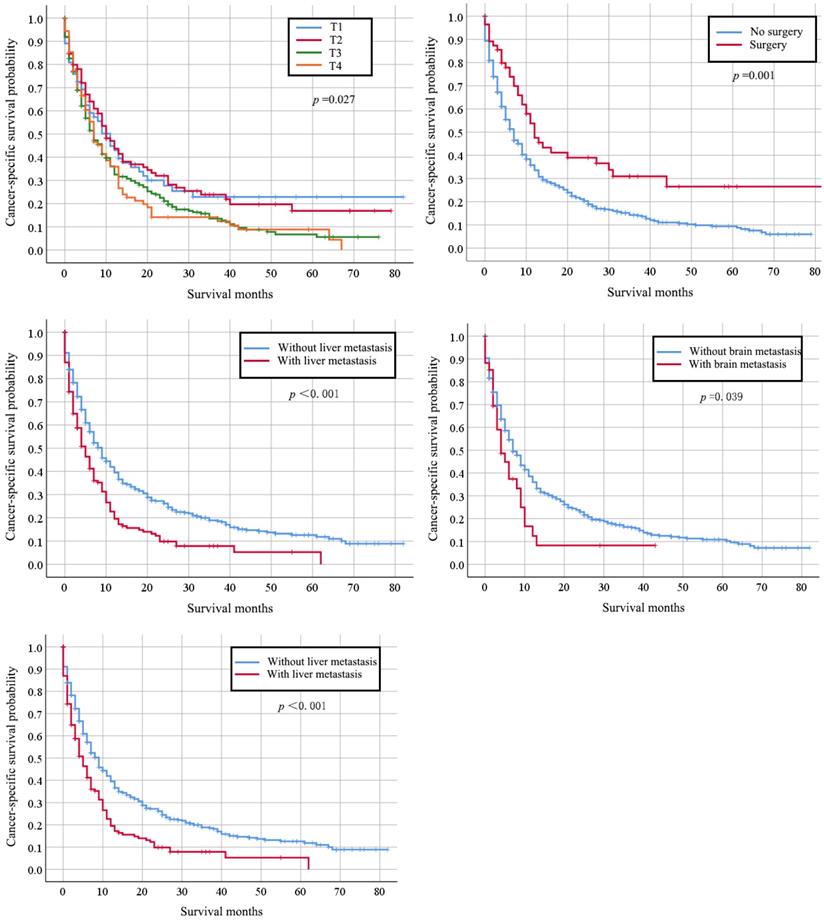 There are two metastasis approaches for cervical cancer, hematogenous and lymphatic spread. The most common organs of cervical cancer metastasis are lung, bone, liver, and brain. Our current results showed that the coexistence of lung and other organs (bone, liver, and brain) metastasis was common, as they were all caused by hematogenous spread [21]. Accordingly, we suggest that those patients with senior age, special histologic type, lymph nodes metastasis as well as poor differentiation should take pulmonary imaging assessment to detect early lung metastasis. 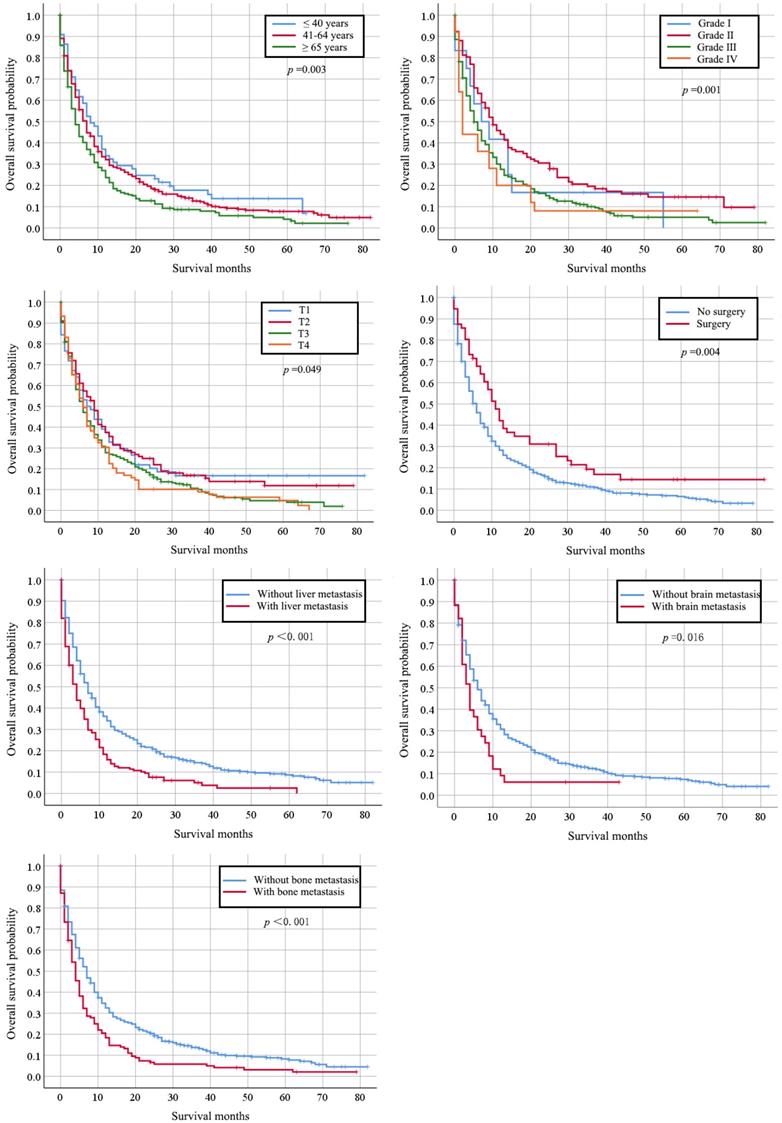 Currently, there is no standard treatment option for patients with lung metastases from cervical cancer. Systemic treatment with chemotherapy is the main treatment. But it has no improvement on the poor median survival, which is reported to be 0.69 year [3]. Surgical resection of the pulmonary lesion was an effective treatment for those patients without lesions in other organs [22, 35]. In our study, seven patients received lobectomy, six cases are still alive. Our observation further supports the therapeutic effectiveness of pulmonary lesion resection in cervical cancer with resectable lung lesion. According to the published report and our experience, we recommended that patients with resectable lung metastases from cervical cancer underwent metastasectomy.

Our study had some limitations. Firstly, it is a retrospective study, and it might have some bias which could not be avoided. Secondly, the incidence of lung metastases might be underestimated. Thirdly, we acknowledged the limitations due to the limited sample size. We are collecting data for more patients in our hospital as well as cooperated with another institution; and will update our study in the future.

To sum up, lung metastasis from cervical cancer is rare and has a poor prognosis. Advantage age, non-squamous histology subtype, late stage, lymph nodes metastases and poor differentiation are associated with an increased risk for developing lung metastasis. Pulmonary imaging assessment is highly recommended to these patients within 2 years after primary treatment. Adenocarcinoma and multiple pulmonary lesions are negative prognostic factor for cervical cancer patients with lung metastasis. Metastasectomy might be helpful to prolong survival, especially to those patients with solitary lung lesion and without other organs involved.

16. Rositch AF, Nowak RG, Gravitt PE. Increased age and race-specific incidence of cervical cancer after correction for hysterectomy prevalence in the United States from 2000 to 2009. Cancer. 2014;120:2032-8

21. Kindermann G, Jabusch HP. The spread of squamous cell carcinoma of the uterine cervix into the blood-vessels. Archiv fur Gynakologie. 1972;212:1-8

26. Fujiwara K, Monk B, Devouassoux-Shisheboran M. Adenocarcinoma of the uterine cervix: why is it different?. Curr Oncol Rep. 2014;16:416