Colorectal cancer (CRC), one of the most common cancers worldwide, had caused a higher and higher morbidity and mortality each year [1-3]. It had been reported that about 900000 people died every year [4]. In China, 20.7 per 100,000 were projected to be diagnosed with colorectal in 2020 and the case-fatality ratio in China was 14.0 % [5]. The treatment for colorectal was an enormous challenge.

Unfortunately, those about 20% patients were in the middle and late period when see a doctor complicated the treatment [6]. Chemotherapy represented an essential treatment for patients who were in advanced stage [7]. 5-Fluorouracil (5-FU), playing a critical role in regulating the cell cycle and apoptosis [8], had emerged as the front-line chemotherapeutic drug for colorectal cancer [9]. However, many patients had no response to 5-FU, leading to recurrence or even worsened condition [10]. Chemotherapy resistance to 5-FU became an issue urgently needed to be solved.

The RKO was maintained in RPMI-1640 complemented with 10% fetal bovine serum. The SW480 was complemented in DMEM (Dulbecco's Modified Eagle Medium) containing 10% fetal bovine serum. All cell lines were cultured at 37℃ in 5% CO2. When the cells proliferated to 80% confluence, the cells were digested with trypsin, centrifuged, washed with aseptic PBS twice and plated on the cell petri dish. The cells in the logarithmic proliferative phase were taken for the experiment.

Cells were plated on upper chamber of transwell (300000 cells per well) when the cells were logarithmic phase. After 36 hours, the chamber was fixed in methanol for 5 minutes and stained with crystal violet for 5 minutes. The number of cells passing through Transwell chambers was observed under microscope.

Cells were digested by trypsin, centrifuged, washed, centrifuged again and a series of operations are carried out according to the instructions of apoptosis kit (Neo Bioscience, Beijing, China). The cells were detected by upflow cytometry last.

In order to clarify the mechanism of its effect on the proliferation of colorectal cancer cells, we examined that whether demethylzeylasteral could affect the cell cycle arrest and apoptosis using the flow cytometry. What could be clearly seen was that the cell number in the G0/G1 phase increased, whereas decreased in S and G2/M phase in a dose-dependent manner (Figure 2A, B). Previously, it had been reported that cell cycle related proteins express in different periods. For example, P-Rb and CCNB proteins tend to be highly expressed in S or G2/M phase [18, 19]. As we supposed, compared with the control group, the protein levels of P-Rb, CCNB were lower in drug treatment group (Figure 3C). As was showed in Figure 3A, with the increase of drug concentration, the apoptotic rate increased gradually. The apoptotic rate of control group was 6.4% in SW480; however, it was 23% when the drug concentration was 20 μM. Similar results were achieved in the RKO (Figure 3A, B). In addition, the apoptosis related protein levels of BCL-2, BAX and Cleaved-PARP were monitored by Western blot. After treatment with demethylzeylasteral, the protein expression of Cleaved-PARP, BAX were enhanced, and the level of BCL-2 was inhibited (Figure 3C). These results showed that the cell cycle arrest and apoptosis were involved in the cell proliferation inhibited by demethylzeylasteral.

Demethylzeylasteral enhanced the chemosensitivity of human CRC cells to 5-FU

The effect of 5-FU combined with demethylzeylasteral was more dramatic

In order to verify whether the combination of the two drugs could really work better, we selected the appropriate concentration for the experiment. Figure 5A revealed that there was a gradual decrease in the cell number that was treated with 5-FU and demethylzeylasteral. The evidences confirmed that demethylzeylasteral could enhance the anti-tumor effect of 5-FU in Colorectal cancer cells. The same result was verified by the clony experiment (Figure 5B). It can be seen that there was a better effect when the two drugs were combined.

The network pharmacological relationship between demethylzeylasteral and colorectal cancer

We obtained the 3D structure of demethylzeylasteral from PubChem database (Figure 6A). A total of 283 possible binding sites of demethylzeylasteral were predicted by PharmMapper database (Table S2). At the same time, we searched for a total of 10224 genes related to Colorectal cancer through TCGA database, which were differentially expressed genes between normal and neoplastic tissues (fold change > 1.4 or < 0.7, P < 0.05) (Table S3). Compared with normal tissues, 6227 genes were up-regulated and 3997 genes were down-regulated in cancer tissues (Figure 6B). As shown in Figure 6C, we had a total of 150 genes which were associated with demethylzeylasteral and Colorectal cancer by constructing a Venn diagram (Table S4). We used cytoscape software to visualize the “Colorectal - targets - Demethylzeylasteral” network (Figure 6D). A PPI was analyzed by using String database. (Figure 7A, Table S5). In the PPI network, we found 15 hub genes (Figure 7B, Table S6). These genes may play an important role in the regulation of the whole PPI network. For example, EGFR, CCNA2 and CDK2 played important roles in cell cycle. Or MDM2 and BCL2L1 could affect the cell apoptosis. Morever, we also carried out the analysis of the survival rate of these hub genes in CRC through Oncolnc database. The cox regression results were shown in Figure S1. The genes, including AR, BCL2L1, EGFR, ESR1, were correlated negatively with overall survival. However, CCNA2, CHEK1, MDM2 played the opposite role. 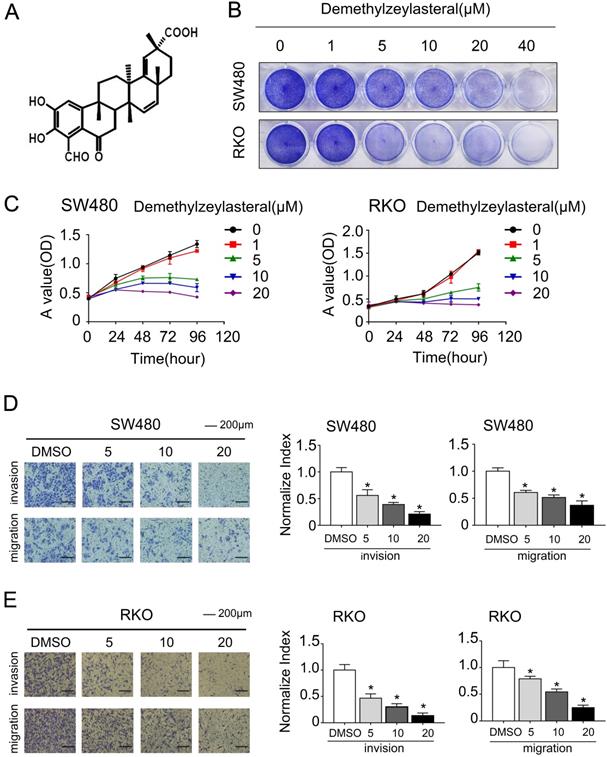 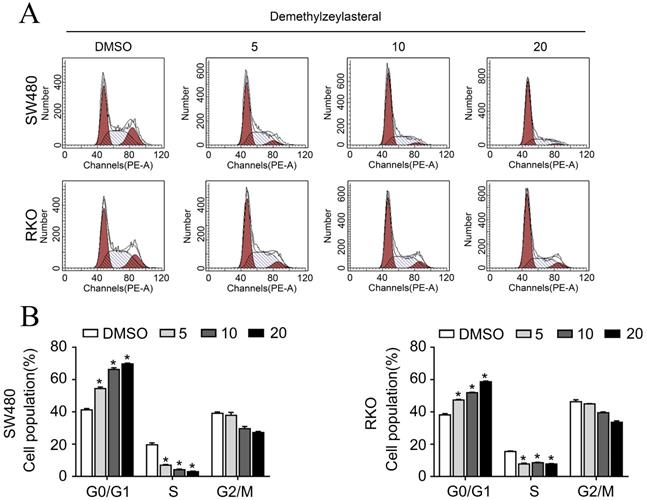 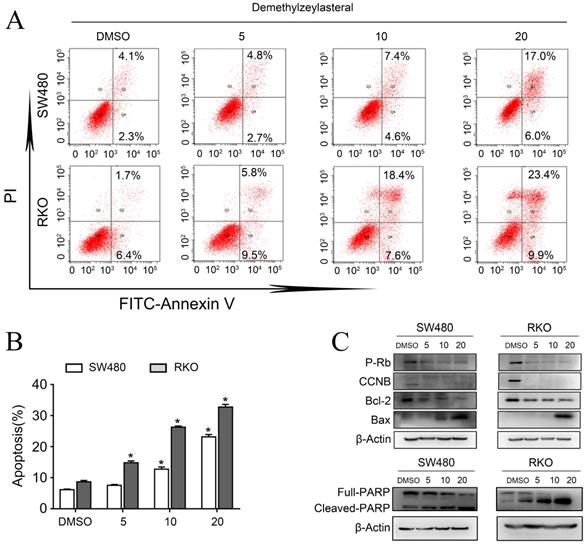 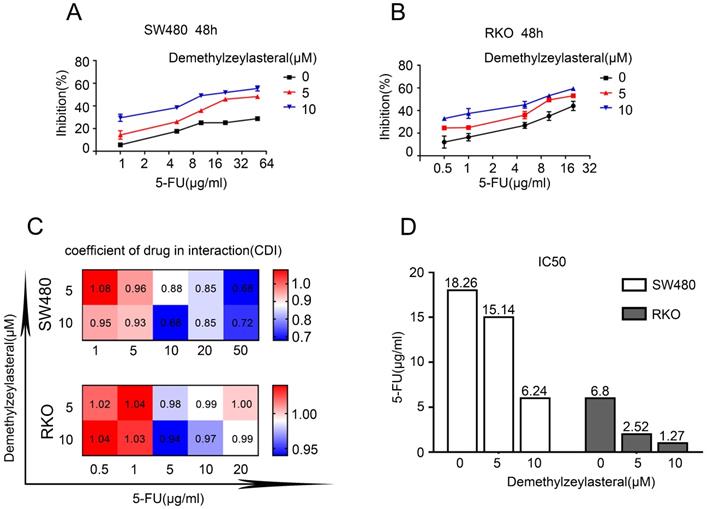 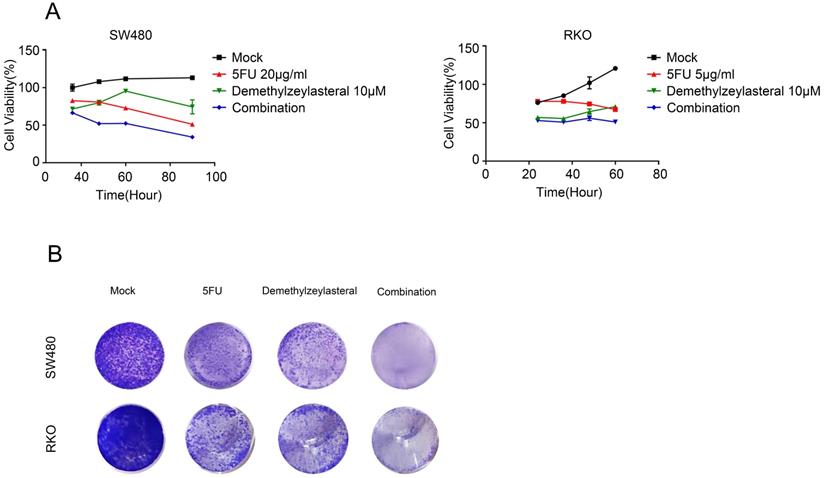 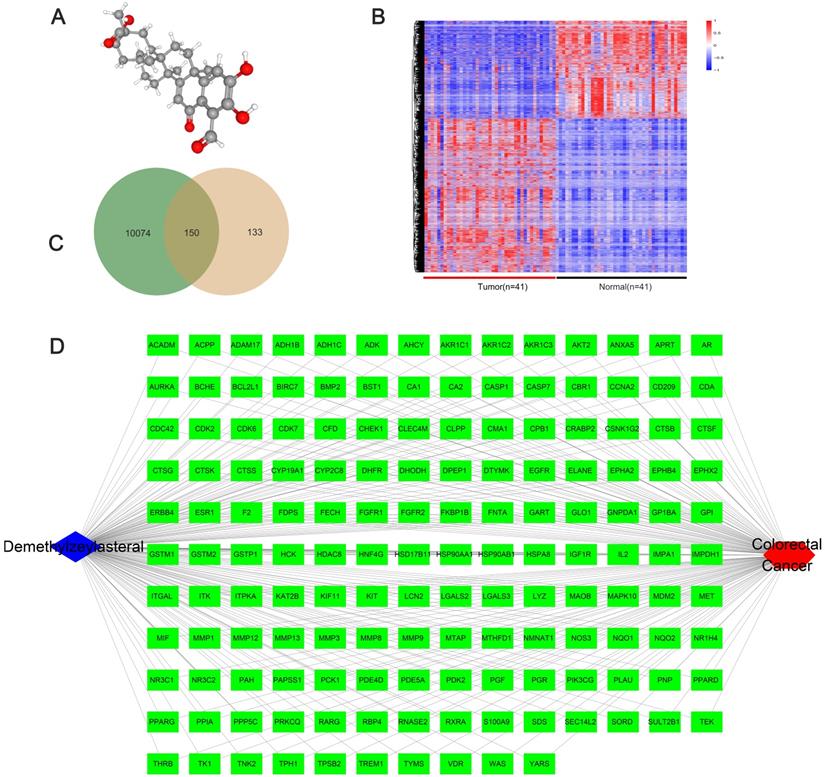 We performed GO and KEGG pathway enrichment analysis of these 150 genes by using DAVID database. The results showed that these 150 genes were mainly related to cytosol, extracellular region, cell surface, cell-cell junction, nuclear chromatin, mitochondrion, lysosome, or spindle microtubule (Figure 8B, Table S7). At the same time, they had the function of receptor, enzyme activity and so on (Figure 9A, Table S8). They were involved in the regulation of apoptotic process, regulation of cell proliferation, response to drug, glucose metabolic, immune response or regulation of inflammatory response (Figure 8A, Table S9). KEGG pathway analysis showed that these genes were enriched in many cancer-related pathways, such as PI3K-Akt signaling pathway, Ras signaling pathway, metabolic pathways, cell cycle, VEGF signaling pathway, apoptosis and so on (Figure 9B, Table S10). This suggested that demethylzeylasteral may affect colorectal cancer through these pathways. This provided a theoretical basis for our future research. 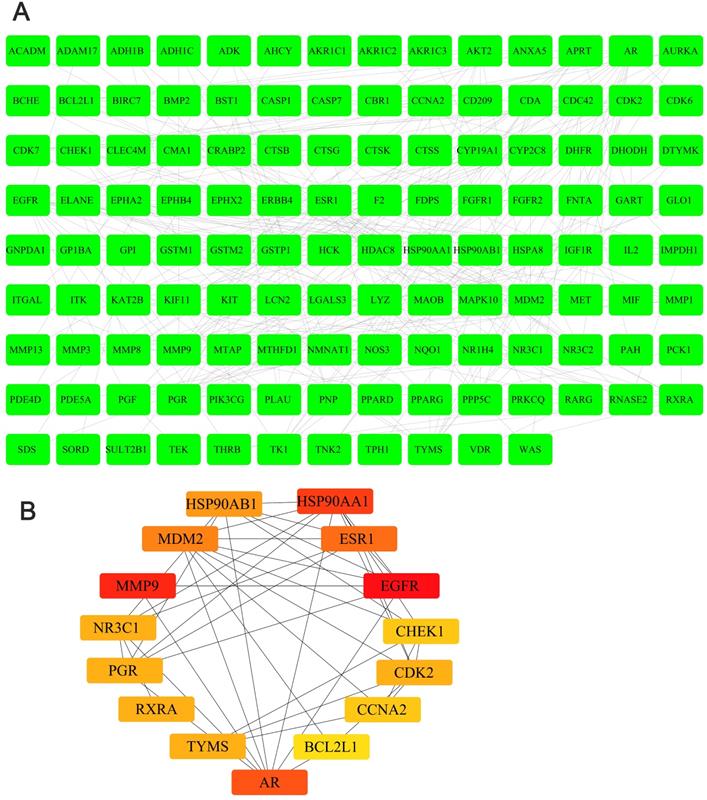 Colorectal was one of the most common cancers in China. In recent decades, 5-FU had been used as a first-line treatment for colorectal cancer [20]. Nevertheless, when used as a single drug, the non-response rate for 5-FU was about 50% for metastatic Colorectal cancer patients [21, 22]. Hence, it was crucial to enhance chemosensitivity of 5-FU.

The GO analysis of 150 genes related to Demethylzeylasteral and Colorectal cancer. A. Biological processes. B. Cellular components. 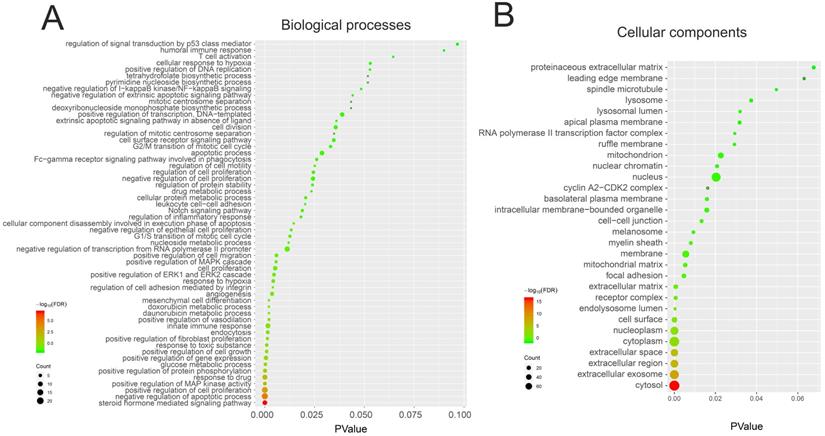 The GO and KEGG pathway enrichment analysis of 150 genes related to Demethylzeylasteral and Colorectal cancer. A. Molecular functions. B. KEGG pathway analysis. 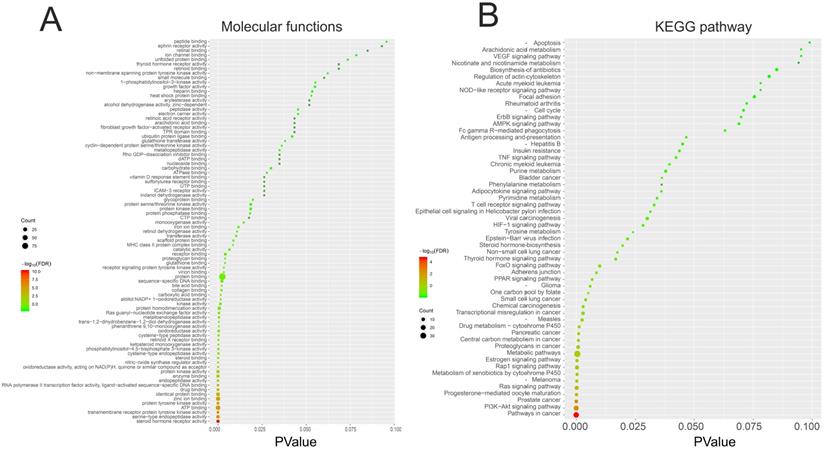 Now, we had noted the key role that demethylzeylasteral played in colorectal cells. Further research would be conducted to verify that whether a consistent result could be observed in vivo. In addition, it was essential to explore the toxicity of demethylzeylasteral in vivo. Our study may represent a new therapeutic strategy to overcome the chemotherapeutic resistance in CRC.

This work is supported by the Special Fund for Marathon (NCC2017A23).